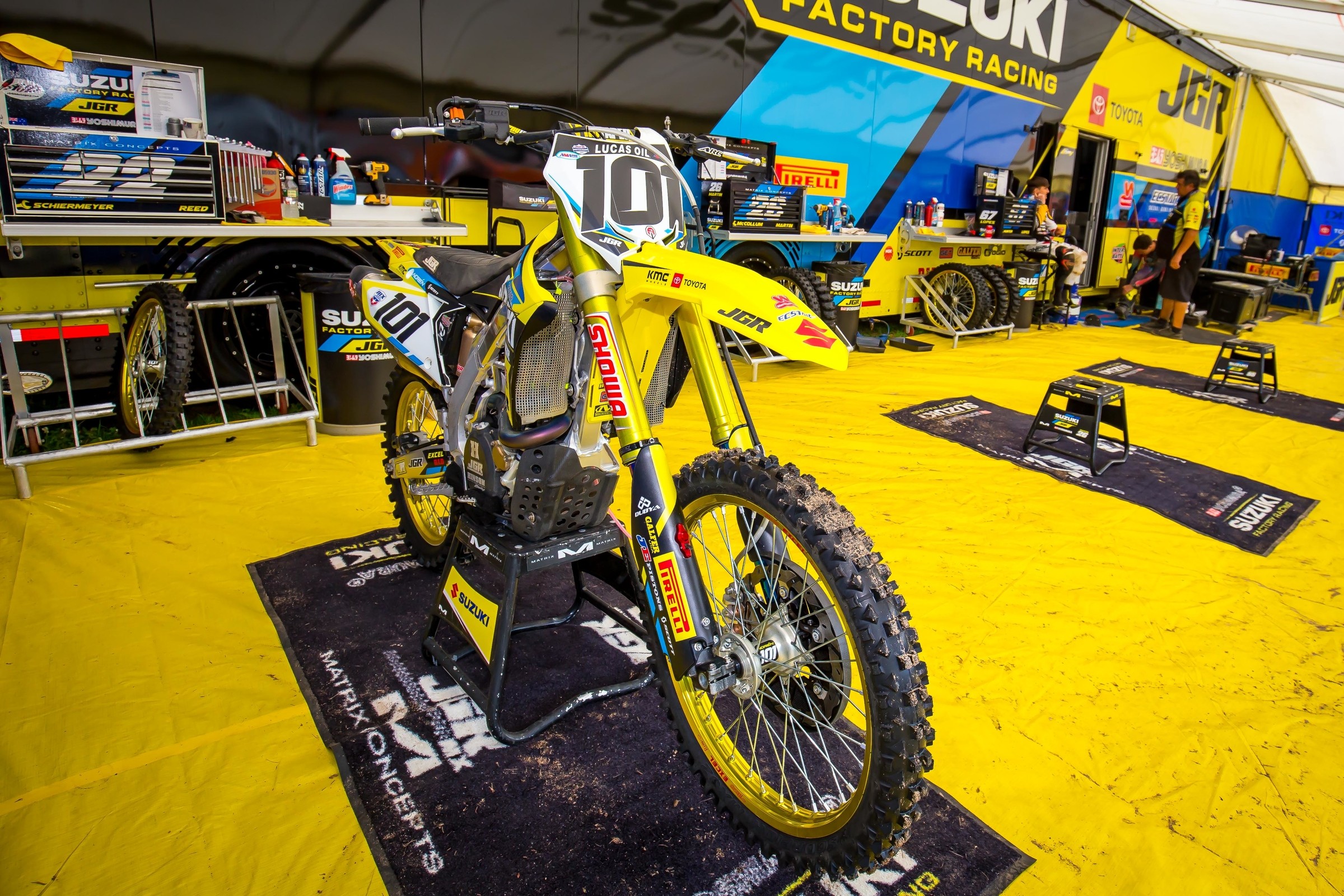 If you want the real story, you’ve gotta ask the wife. On Friday at Southwick, I chatted with Fredrik Noren about his new ride with JGR/Yoshimura Suzuki, and the struggle of privateer life before that. Freddie admitted the first five races of the 2019 Lucas Oil AMA Pro Motocross Championship were tough, but only his wife, Amy, could really put the fine point on it. She explained that there were days when Fredrik was literally running a fever, not because he was sick with a virus, but just from the stress of dealing with everything—racing, riding, training, then working on the bike and handling all the logistics and travel. The stress was eating him up, and after a rough weekend at High Point, he was considering giving up.

First, Noren hired a practice mechanic down at ClubMX, where he trains. Mechanics down there can work on multiple bikes and hence cut costs, so Freddie was able to pay that bill. But in general, he was feeling so run down that he was considering giving up, or maybe trying the Canadian Nationals instead.

“I told him, ‘You’re good in the sand because you ride it at ClubMX. Just try Florida before you give up on it,’” Amy explained.

So try Florida they did, and that’s where Noren went 9-8 for ninth overall, battled with points-leading Eli Tomac a bit, and caught the attention of JGR. That one race turned his entire career around.

By the way, Noren thanks Isaac Teasdale’s dad for jumping in with the wrenches between motos at WW Ranch Motocross Park. He was his own mechanic that day, but he was laying on the ground exhausted after moto one and wasn’t going to be able to jump up and change a filter. Teasdale’s dad pitched in, then Noren went back out and dug deep for that eighth-place finish. At the end of the day, the JGR Suzuki gang approached him, he tried their bike on Monday, and decided to sign the deal.

It has been one heck of a rough season for JGR, so there was inherent risk on their end. What if Noren went 9-8 one week on a privateer Honda and suddenly threw out a 15th on his new Suzuki?

“We told him to bring his Honda to the test with him and do lap times,” said JGRMX/Yoshimura Suzuki Factory Racing team manager Jeremy Albrecht. “We didn’t want him to just take the deal because he felt obligated since we asked him. If he was more comfortable on his Honda and wanted another week or two to test with us and get used to the bike, he could do that. But he liked our bike. Buddy [Antunez] took the lap times and they were good.”

Then Noren insured there would be no regrets by racing perhaps his best race ever on Saturday, going 7-5 for seventh overall (Noren’s career best is a sixth place overall, delivered with 6-6 scores at Unadilla in 2017).

“I’m pumped with the weekend. Pumped!” said Noren to our Steve Matthes. “Best result this year, tied for fifth overall for the day. It’s a good base, I’d say, now I know where the bar is set. Hopefully I can work for that podium!

“I’ve been telling people it’s like ketchup and mustard, both are good but they’re different,” Noren explained about going from Honda to Suzuki. “These guys have been working super hard to get me comfortable on the bike. They have a lot of experience, and it’s gone really good.”

The JGR team was happy with Noren’s precise ideas on bike setup. They knew he could go fast at the races, but were happy also with his development work during the week. Noren, who had been a suspension tester for Showa and has also had a few fill-in runs with factory Honda, says he’s developed that skill through the years.

“Yeah through these years I’ve really been able to test a lot,” Noren explained. “It’s been beneficial for me. You really learn what you like and what you don’t like, you get kind of picky, but you can learn what to say, how to relate things, so these guys know what they need to do.”

Noren has also developed his sand technique. The Florida and Southwick results indicate he’s a sand master, but Noren said the tracks he grew up on in Sweden were hard as a rock, but he has learned a lot riding softer tracks in the U.S. He used to dread Southwick, now it has become one of his best tracks.

In the motos, he got into some battles with Monster Energy Yamaha Factory Yamaha’s Justin Barcia.

“First moto was gnarly!” he said.  “We were battling for a long time. With like two corners to go, he totally slammed me, and I said ‘I’m not going to let this dude by, we’re going to have to go down together.’ Hey, it’s always good to battle, but this time I was feeling a little tired, so I would have preferred to not have to battle! Luckily, I came out on top in that one.”

The best part? He gets to do it again this weekend, without any of the privateer hassles. No more working on bikes, grocery shopping for the weekend, setting up his pit area, or driving to the race.

“I’m pumped! This is awesome. I just fly in and out and someone else takes care of that,” he said with a smile.

“This was the weekend that the team needed,” added Albrecht in a team statement. “Freddie and the team did a great job leading into Southwick to prepare for the race. It was a great combined effort. Noren’s excitement transferred over to the team and proved that he is, in fact, ‘Fast Freddie,’ and I think he can do even better at RedBud.”

After a tough season, the JGR/Yoshimura Suzuki Factory Racing team is just as happy as their new rider.