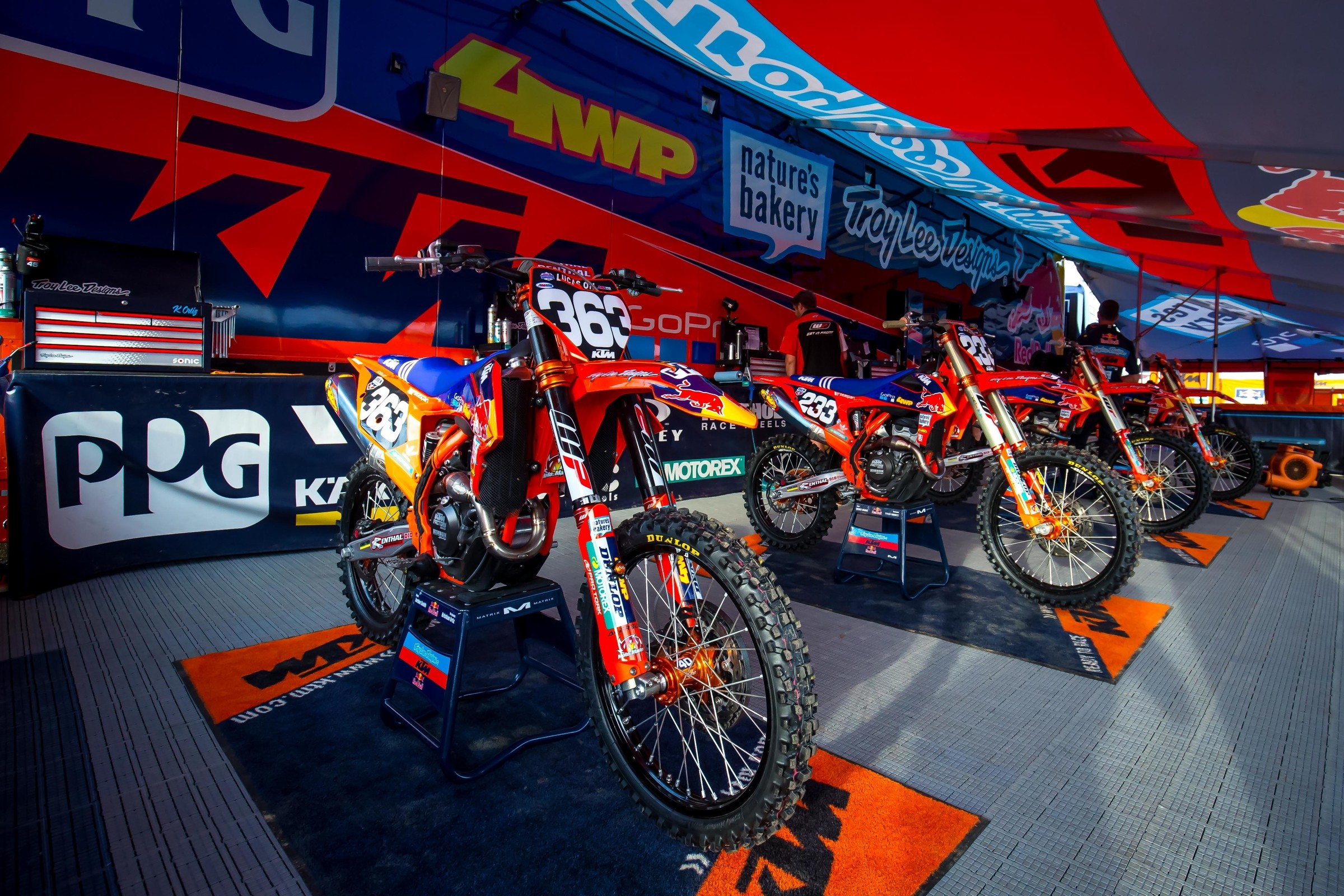 Suffice to say the 2019 season has not gone well for Troy Lee Designs/Red Bull KTM. Title contenders Shane McElrath and Jordon Smith ended up injured and out of contention in Monster Energy AMA Supercross, and the story was pretty much the same for prospects Mitchell Falk and Sean Cantrell. The hits kept coming, and at one point all four riders were out with injury!

Now it’s onto trying new things. Derek Drake made his pro debut at Hangtown, Wilson Todd got a few starts with the team before heading back home to Australia, Cameron McAdoo has come on board as a fill in, and now amateur Pierce Brown got the call to race at WW Ranch (there’s a new rule for 2019 allowing riders to race three pro events but maintain amateur status). By the way, the rumor that MX2 World Champion Jorge Prado might someday come to the U.S. to race the 250 class is over--he just signed a contract extension to stay in MXGP for the next four years.

We caught up to Keefe after the Florida National, which, yes, offered up some more lumps for the team. This sport is not easy!

Racer X: First of all, how did it go today? You got another new kid. How did that go?
Tyler Keefe: The day started actually pretty good with Derek [Drake] getting the holeshot. He rode really well and then just made a stupid little mistake and kind of hit his body pretty good. Tried to race second moto, but he wasn’t able to.

He did get back up and ride a little bit after the crash, right?
Yeah, he did. Then [Cameron] McAdoo was I think in eighth with two laps to go and honestly just got heat exhaustion. He fell in the last corner before the finish and then rode over the finish and basically fell over. He had to get two IV’s. So he was done for moto two. Then Shane [McElrath] kind of struggled a little bit coming back. Pierce Brown did good. He fell both motos, but second moto he came from 33rd to 10th. Honestly trying to find any little positive right now, and the young kids are bringing some speed now so that’s good. We’ve just got to keep plugging away.

The heat or whatever for some reason didn’t bother Brown? That’s a pretty hard charge?
He just turned 17 so maybe that has something to do with it! He ran hard for both motos. He didn’t jump in the ice bath. He just kind of sat there and let the fan run on him. He’s been up at MTF in Georgia, so maybe that’s helped. He was really good today. He stood a lot. I was happy.

When did you make the decision to have him try one of these? How recent was that?
Monday.

Seriously?
Yeah. I think I called him Saturday night after High Point. They were flying to California to get ready for Mammoth and it was like, “Hey, we have this new rule with the AMA [allowing amateurs to race pro events].” The kids always have speed, so why not bring him out here? With all the guys being injured, get him out here and let him learn a little bit. I think you’re going to learn more here in one day than you will in a whole week at an amateur race. I think it’s good. We’ll just keep plugging away.

Look, your guys McElrath and Smith got hurt. Those are your main title contenders. That hurt your season. Is it hard deciding between we just had bad luck as opposed to reinvent the entire wheel and start doing things differently? How do you decide?
I think last year we got second in all three series, so not much has changed. Just our luck. It wasn’t our year. I think we had really high hopes and it bit us in the ass. We’ve just got to keep plugging away and just try to take every little positive we can. Right now bringing kids on and getting those kids to see their potential and what they can do has kind of been what we’re looking for. It’s just really trying to start building momentum for 2020, but we have to get through ’19. This year has been one of the roughest years. I think ’16 was a really rough year. Everything happens in threes. We just keep plugging away and trying to take it moto by moto and get these kids to fight up front. That’s all we’re looking for. Starts and run up front and we can work with the rest.

So Brown is going to Mammoth, and then maybe one more of these at RedBud or something? How is that all going to work?
You can race three of these or score up to 40 points. I think we might see him next weekend.

Southwick? All based on just how it went today?
Yeah. We were planning on doing this one and Red Bud. The amount he stood here today was good.

The amount he stood? That’s what stands out? Not the results. Standing up?
His results were good. He was fresh, but he stood a lot. That’s what I like to see. I think that’ll do well at Southwick for him.

What does that show? That he’s strong?
Keeps your momentum. Sand riders stand a lot.

You know we had [Ricky] Carmichael in the booth today on TV and that was the thing he kept pointing out. Even Eli Tomac, Marvin Musquin, everybody was getting tired and the telltale sign was sitting down. So I guess you guys know what you’re talking about.
Yeah so last moto Pierce stood pretty much…he was still good at the end. There were times he had two or three bad laps, but other than that he was pretty much the same. All it is for him is that he’s so young—he’s 17—so we’ve just got to gain experience. No better way to do it than out here.