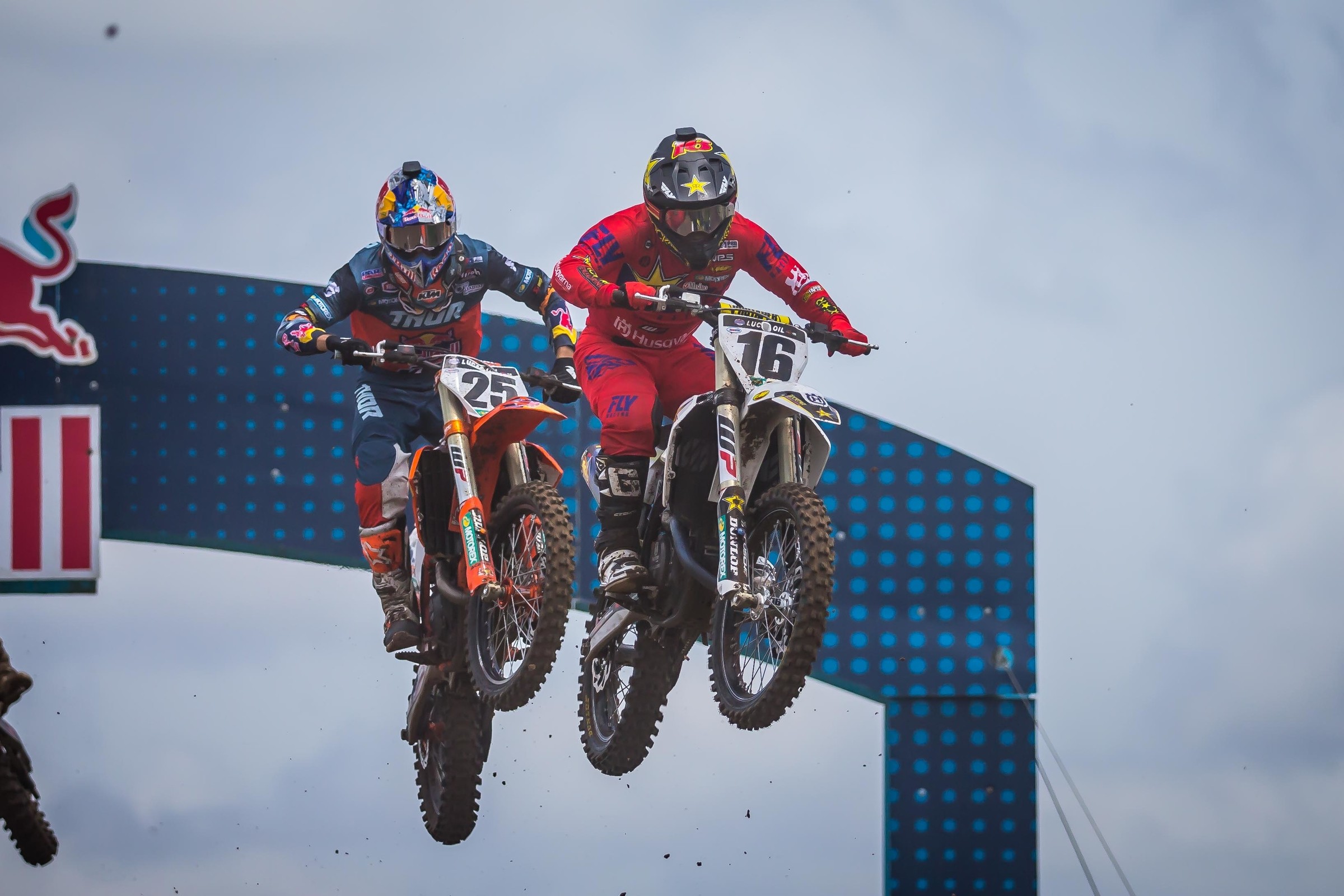 For the first time in 22 years, Lucas Oil Pro Motocross staged a race in the Sunshine State, and it took Florida’s typical heat and humidity to inject some new winners into the series, adding legitimate parity on paper to a series that has actually looked ultra-competitive all along. In tough conditions at WW Ranch in Jacksonville, it became difficult for any rider in the 250 or 450 class to log two solid motos, which led to quite a bit of drama during the day. Everyone had to dig deep on this day, which meant the wins felt even sweeter, because they were hard-earned.

In the 450 class, it was Red Bull KTM’s Marvin Musquin earning it, becoming the first overall winner this year not named Eli Tomac or Ken Roczen. Marvin has been fast all season but small incidents have thwarted usual podium standards—a big practice crash at Hangtown, first turn crashes at both Thunder Valley and High Point—plus, he found himself searching a bit on bike setup. The cure? Switching back to his 2018 settings, and then using his energy-efficient riding style to stay above the choppy, sandy bumps, save energy, and roll to the front in both races. In the first moto, he ran down early leader Roczen to grab the win, and in moto two he made a chase toward Tomac, who was leading. Only late in the second moto did Marvin’s energy reserves finally deplete, but he hung tough for third in moto two (Zach Osborne also passing him) and his 1-3 scores were enough for the overall.

"At the beginning of the season we were struggling with the bike, so we actually went back to what we had last year," said Musquin. "Sometimes you’re leading and you’re winning, and sometimes it feels easier then when you’re in third and fourth. You’re just floating over the bumps, applying my technique. I just clicked. The track was awesome, they did a great job, the dirt was great, it got rough, many lines were developing."

Getting tired late in the second moto and going 1-3 doesn’t sound like hero work, but on this track it was, because virtually no one was strong on every lap of every moto. Tomac, for example, gated horribly in moto one, found himself buried in 18th, and could not come through the pack with his usual verve. He took seventh, but toughed out the second moto win, turning 7-1 scores into second overall. Other riders faded worse than Musquin in moto two, costing them a shot at the win, also.

“It was a combo,” Tomac said of his bad first race. “First of all horrible start, just lit it up in the sand and went knowwhere, but Imy effort forward wasn't there, was struggling to find my pace. I made one change after practice and it just wasn’t there. But it was totally on me there, just couldn't find the right feeling. Second moto, I can’t remember the last time I had a holeshot like that, we were bar to bar going through the first turn and it was just much better. I was just lighter on the bike, getting through the bumps a lot better, getting over stuff. It was more me."

Amazingly, despite the poor first moto, Tomac ended up retaking sole possession of the 450MX series lead, as Roczen flip-flopped him, doing well in moto one and poorly in moto two. Kenny led several laps in the first race before yielding to Musquin. In race two Roczen started with the lead pack but then dropped back badly late in the race, clearly also feeling the effects of the heat (and remember, Roczen missed valuable training time this spring while dealing with an illness that left him feeling drained). His 2-10 moto scores left him sixth overall and now six points behind Tomac.

Maybe the only 450 rider going strong at the end of both races was Zach Osborne, who scored his second podium of the year with third overall, powered by __ scores. The always-tough Osborne had the speed at the end, it was his early-lap pace that cost him.

“It’s been heavy,” said Osborne about his transition into the 450 class this year. “The workloads are not light and the class is stacked. I’m struggling with the pace at the beginning. The first few laps they’re pulling me right now. That’s what I need to work on, but overall the transition has been pretty smooth. The biggest thing for me right now is the last three laps. It looks good on paper that I’m passing people on the last few laps, but I’m just passing the same people that passed me at the beginning of the race.”

Maybe Osborne’s slower early laps help him go stronger at the end? He wishes that were the case. “I tell myself that sometimes but not really,” he said. “When you have to get the guys back and make those passes, your heart rate goes ten beats higher because those moments are so intense.”

Osborne’s Rockstar Energy Husqvarna teammate Jason Anderson was again in the hunt, and possible even (finally) and overall winner. Anderson rode hard in both races, nearly catching Roczen for second in moto one, then keeping serious pressure on Tomac for most of moto two. Finally, he lost the pace near the end and Musquin and Osborne got by. Had he gotten Tomac and held on—which looked possible at one point-he would have won with a 3-1, but his 3-4 finish left him fourth. It was a ride indicative of the whole race day—plenty of riders faded down the stretch.

“The weekend went alright,” Anderson said in a team statement. “I had a good practice and was able to be P1 but it was a hot day here. The second moto, I was in position to have a good overall and possibly get up to the lead and the heat got to me a little bit and I kind of went backwards.”

It was another day where Cooper Webb would have liked to have done better. He holeshot the first moto and battled hard for the lead with Roczen for awhile, but lost the pace and took fourth. In moto two he was fifth, and 4-5 left him fifth overall, ahead of Roczen’s 2-10.

While Tomac and Roczen had done all the 450 winning until this race, the 250 class victories had all been owned by one man: Adam Cianciarulo. Just when you thought it was safe to make predictions, though, the Florida native had his worst race of the year at his home event. He finished third overall. On the flip side, his title rival Justin Cooper fired back after ninth at the previous round, carrying 2-2 scores to finally, finally, finally nail that elusive first professional win. Yeah, of course Cooper, who stays in California and does not train in the humidity, would nail his first win in Florida against a slew of riders who live and train in the state!

"It's a big weight off my shoulders, to be honest, I was just thinking about it way too much [toward the end of the moto], I could barely even ride. The heat was getting to me, too," said Cooper. "I felt good that moto, felt comfortable on the bike, I think we made some good changes to the bike. It was good to bounce back from a bad weekend at the last one, it's hard to have downs when you have ups. I put so much pressure on myself to get back up on the podium. I got ninth last week, I didn't even know what to do with myself. For me to get this, I can't even describe this feeling right now.

"It's funny, I actually lived back here (at WW Ranch) in 2016 training for Loretta's," said Cooper. "I was familiar with the track back then, it was a cool experience to link up with the owner after the race, really cool to win it here. Everyone was struggling with the heat, no doubt about that. It was important to rehydrate between the motos, and you couldn't exert yourself too much in the first moto of you'd have nothing left for the second moto.

It was not easy, though, as Cooper’s final few moments of the second moto were tough, and he had to sit down on the podium to collect himself. Digging deep pays off, as Cooper’s first win, combined with Cianciarulo’s 5-3, allowed him to make up eight points on the day, cutting Cianciarulo’s gap to 18.

“It's hard to accept a third place after the way the first few races went,” explained Cianciarulo. “I felt pretty off all day. I was just talking to Dylan [Ferrandis] about this, I think maybe I trained too hard during the week coming into this. We are from Florida and we get to ride in this heat, but you can burn yourself out, you don't get to recover the same riding this stuff every day. I don't want to take anything away from these guys, they were ripping they crushed me that second moto. I''m just stoked I was able to manage the day."

Finally, a Dylan Ferrandis sighting early in a moto! An early season of horrible starts has left the Frenchman coming from behind with every gate drop, but he finally started up front in moto two. He then stalked Cooper most of the way, waited to wear him down, then cruised past for his first moto win of the season. In moto one he came from way back to make a late pass on Cianciarulo for fourth. His 4-1 gave him second overall.

"Yeah, moto one a bad start, outside of top 15, so it was tough, used a lot of energy," said Ferrandis. "Second moto, got a good start and I was very happy. That's what I need this season, good starts every moto. It's something where I'm struggling a lot, and that's cost me a lot of points. I was happy to win the second moto. We'll see next week, Southwick, I've been looking forward to that race, and we'll see if I finish on top of the podium there."

No better illustration of the tough conditions than Chase Sexton, who rallied to take his first career AMA National moto win in the first race, catching and passing Cooper to do it. It took everything he had to do it, though, and Sexton was completely drained after the win. He rode a few laps of moto two but had nothing left, and rode back to the pits with a DNF.

Quietly, Michael Mosiman logged another rock-solid day, just missing the podium with 3-5 scores and fourth overall. He tied Cianciarulo on points for the day. “This was definitely the toughest race of the year,” Mosiman said in a team statement. “I’ve been saying it all along – if I can get a start, I can run with those guys and I got two good starts today! I was up there both motos at the beginning and I tried to save energy but those guys are going so fast and to maintain that pace, you’re pushing pretty good. Overall, I’m happy with my fitness and pleased with the day.”

Hunter Lawrence was strong but didn’t get great starts, the Australian was fifth with 8-4 finishes.