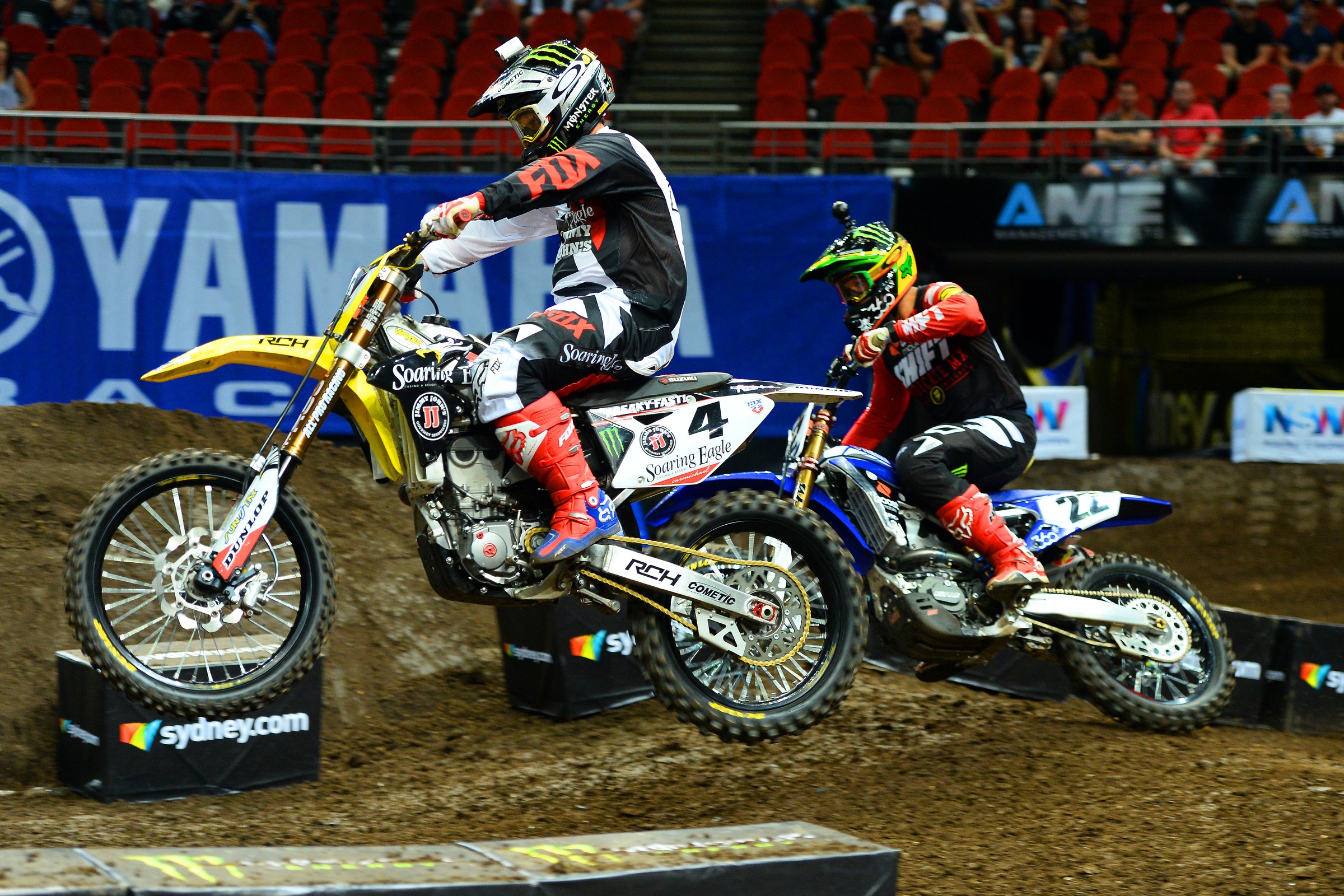 Open Mic Ricky Carmichael On A Host Of Topics

When the GOAT (Greatest of All Time) talks, you listen. Ricky Carmichael covers a range of things from racing in Australia to racing against Chad Reed, the current SX landscape, and a hypothetical match up with Ryan Villopoto.

Strap in and hold on!

Racer X: So, I would like to begin in 2003, when you have this young Australian [Chad Reed]—seen as the new kid on the block—trying to take over your throne. Fast-forward 16 years; did you think you’d ever race in his home country not only once, but three times, and to such a heroic reception?
Ricky Carmichael: [Laughs] It was amazing to see Chad [Reed] at the time really come out of nowhere, honestly. He did have a massive amount of success early on and was able to start winning at the 250cc level, and then translate that to the 450cc level too; but yeah, he kind of came out of nowhere. It really amazes me that he’s still going—I tease him all the time about it [Laughs], saying “Hey, you could be having a hell of a lot more fun doing what I’m doing,” but he still loves it and even moreso the fans love him, so I’m a huge supporter of Chad.

Then to get to the second part of the question, did I ever think I would get to come to Australia and race? No, never did I think that. The coolest thing is that when I’ve come over there, just how receptive the fans were; they were so gracious and so excited to see me. Then when I started thinking about it, all they’ve ever seen is Chad and I racing on TV, so you know when they first got to see me race, they were really amped about it.

It’s awesome to see how respectful the fans are, and they’re so fun to be around.

Fundamentally, you’re a racer who’s been around the sport for a long time. So I’m interested, when you come over to Australia and see the caliber of racing the guys compete at, what do you think of the talent Australia is producing in terms of supercross riders?
Well as far as supercross goes, Australia has produced some really good talent—they have for a long time now. You’d have to say that’s been the case for easily the last decade. We’ve seen guys like Chad, Byrner [Michael Byrne], and [Dan] Reardon—I mean there’s a list of them, a laundry list of great talent. And what’s crazy is that those are just some of the guys who’ve been successful in the U.S., but then there’s a lot of Australian supercross riders who haven’t had a crack at it, but they’re still fast as hell. So when I go over there, I’m always blown away at just how fast they are, and I’d love to see those guys get a crack at it over here in the States also.

Looking at the current supercross landscape, we’re in an interesting time where not one singular guy has taken a stranglehold at the top. Which is strange, as we’ve seen MC’s era, your era, Chad and James Stewart, RV, and then Ryan Dungey. What do you attribute this level of parity to?
There’s a lot of parity, and things are a lot different now then they were in MC’s era, my era, Chad, and RV’s era—you know the multi-time champions, and I think now you’re starting to see a phase where everyone practices together. So there’s really no secrets, and everyone knows exactly what everyone is doing, and you know, they’re just all the same. [Laughs] They do everything together, they practice everything together, you know like I said, there’s no secrets. So I think maybe why what we’re seeing right now, why it’s so competitive and there’s not one standout guy for 17 rounds, is because of the things I mentioned. They all ride at these facilities together, and there’s really no separation.

I think I remember reading somewhere that, in your day, you suggested that you ride with someone, and it was shut down straight away.
Yeah, yeah, back in the day, I practiced with a couple guys but never direct competitors. There was no way in hell I was going to call up Chad Reed and ask him to come practice with me, and you can ask Reedy today if he would’ve let me practice with him and he would say no way. So things are a lot different, the landscape is really different; and I do believe, even though it’s not talked about a lot, that what I mentioned earlier is the reason for guys being so close.

Joey Savatgy has been announced to come down and compete at the AUS-X Open, and he’s someone who you’ve worked with quite a lot at the GOAT Farm. What did and do you see in Joey?
Well, he has come along way since he started riding down at my place. And yeah, I’ve worked with him a bit, which it has been cool to see his progression; he did really well this year, he did exactly what we planned to do and sometimes better. I see that he is going to continue to improve. One thing that is good about Joey is that he gets fantastic starts, so I think if he can continue to do that often he’ll be on the podium more, and potentially contending for wins. I’m excited to see that he’s going to be heading to Melbourne for the event, I see him as one of those guys who’s going to be contending for wins down there.

I think also the fans will enjoy watching him—he’s a really smooth rider—and actually from a coaching standpoint, it’s so hard to really critique him because he has really good style, so it can be difficult to help him from a riding style perspective. Now when it comes to lines and things of that nature, that’s where we can really help him and then race strategy and building him up mentally. But, from a style on the motorcycle, the guy is pretty perfect.

Switching gears to your career, who would you say was your hardest competitor, and maybe there are a couple, but who would you say and why?
Great question. We’ll start with Chad. He was really hard because he was just fast enough to where it would force you to ride a little bit outside your comfort zone, and he didn’t really have any weaknesses. So he was always very consistent, and you knew what you were going to get with him—he was always going to be up front. He was also really good in getting behind you and learning your pace, then making the correct adjustments to rise to the occasion and adapting to the speed that you were able to go.

Now from a speed standpoint, obviously James Stewart. It’s impossible to go as fast as him. My goal was to never be as fast as him, but to just try and keep him close because I felt that if I could keep him close, he was a guy that you could bet on that he wasn’t going to be able to hold it together for all the races in the series.

So that was my strategy with those two guys—I feel like they were the two who I raced with the most and had the more intense battles. Once I got good enough to beat McGrath in the series, he was good, but I’d felt like in 2001 when I won my first supercross championship, I felt like I was in a league of my own. With no disrespect to MC at all, I just felt like he couldn’t run my pace with the way that I rode. He would’ve had to take a risk, which I don’t think he wanted to—I was—so MC wasn’t as hard as I thought he would’ve been.

Post your era, which rider gives you the biggest headache?
I think [Ryan] Villopoto. He’s probably been the dude that would’ve been one of the toughest competitors to beat. He seemed just really mentally sound compared to any of the other guys, and that’s why he won so many championships. He did have quite a few injuries, but the dude was just an animal. He was mean, tough, and that’s what you have to do to be a multi-time champion like him. I mean the only time he didn’t win championships was when he hurt himself. So I think Villopoto, after my era, he was the next guy.

You said that for Chad and James you employed strategies to combat their abilities, and it’s a hypothetical question, but for RV what do you think you’d have to do?
That’s another great question! I would’ve had to have had a different strategy, because he was willing to throw it on the line and risk it all, but as he would do that he was still able to keep it on two wheels. You know…it would’ve been interesting, I don’t know. I think I would actually had to have raced him and be close to him to see how he actually rides, you know be right behind him and see what his tendencies are. So yeah, it’s a hypothetical question [Laughs], and tricky to answer—but I’d have to race him to see. But just looking at it from face value, it’d be a hell of a battle that’s for sure.

Awesome, well thanks a lot for your time Ricky, we’ll catch you in November!
Yep, cheers my man! Have a great weekend and I’ll see you guys then.