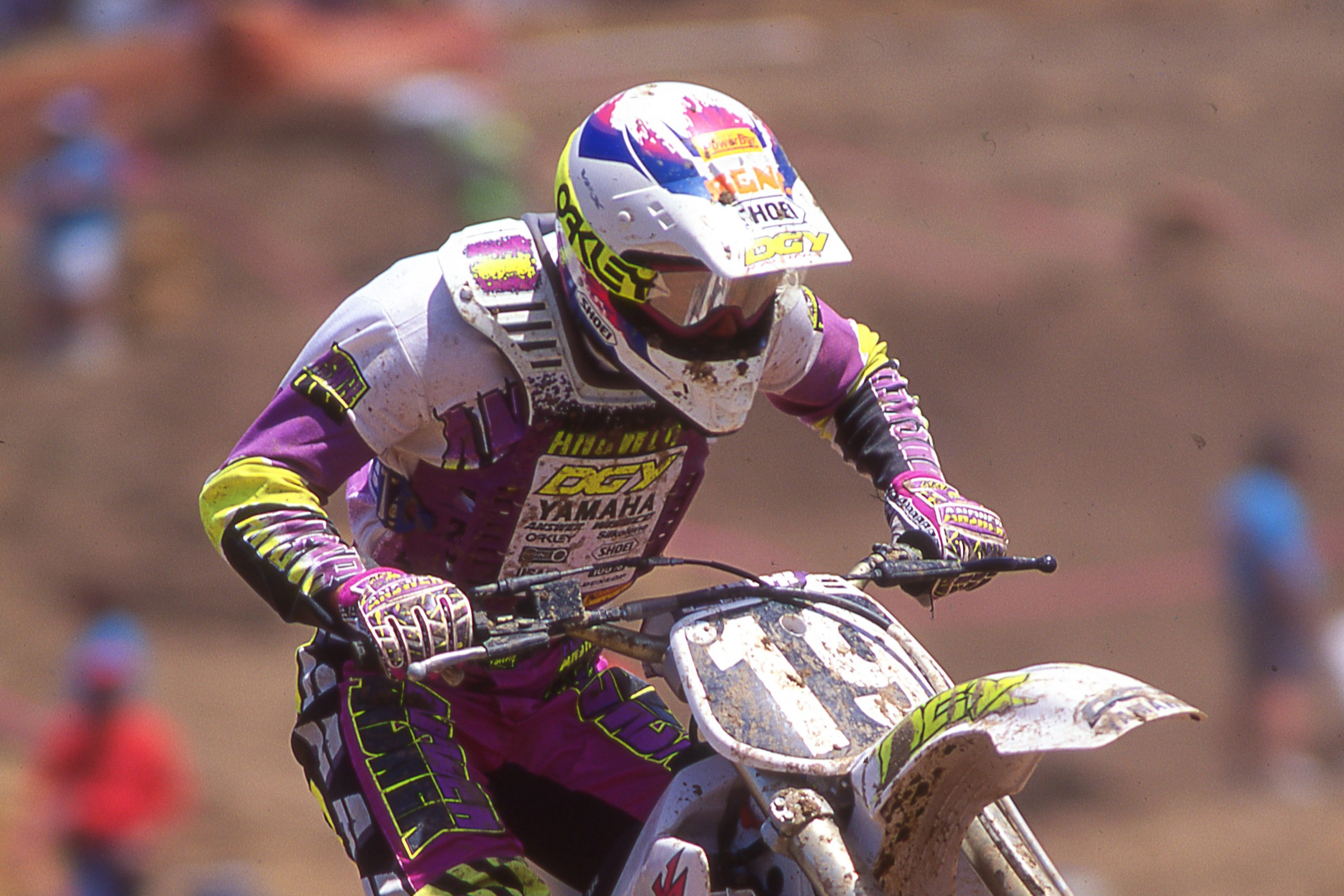 Journalist Brett Smith recently posted an article to his website wewentfast.com exploring an old school riding spot back in New England where Doug Henry essentially learned to ride—and to go very fast. The article is called “Doug Henry and The Dam,” and is a look at what riding was like before the days of training facilities and perfectly groomed tracks.

After reading the story, we decided to look up the three-time national champion and find out what he has been up to. And it turns out, he’s up to a lot.

Racer X: I saw recently that you were out at Sturgis at a new track and doing some riding. What was that about?
Doug Henry: Actually, I did a little bit of riding. I’m not sure exactly who all owns it, but Micky Dymond, Jeff Ward, and a couple of the other guys—Brian Manley and a few others built it up. They’re all kind of guys within the industry. It sounds like it’s Micky and Jeff’s kind of deal where they’re putting together a track out there to do some motocross racing. They’re going to have a kid’s track. They are building a local track for the riders in South Dakota. I guess there’s not very many places to ride out there. There’s a couple of private tracks and then there’s this big dune area, like the Badlands kind of, that most people ride at. So having a track like this, it’s just great for the people who are close by in South Dakota.

That’s cool, and you were just helping them out?
Yeah. When Micky first approached me with the project, he told me about and stuff, and I said, I’ve owned a track for many years. I kind of understand the lay of the land and how water tends to erode and the sun and all kinds of stuff. So I told him just let me be a part of the beginning process because I think I can probably save you guys some time and money in the long run. If you do it right now, I think it will be better. It may cost a little more, maybe take a little bit more time. They may have to change a direction of something or the layout of something, but I think in time it will be beneficial. And I also wanted to go out there and ride somewhere new! I actually stumbled on the Black Hills one time when I was driving the RV from Washougal to Millville back when I was racing. I’m not sure if that’s where I was going, but I was heading through there. I think I had to go to Loretta Lynn’s or something for the week. So I parked my RV there with the bike, and I flew to Loretta Lynn’s. When I came back, the bike rally was full-blown going on. I was like, “Whoa! What the heck is going on?” So I stuck around there for a day or two to check it out, and I actually just went to the Black Hills and just did a little riding on my own. I was just like, This place is so beautiful. Around the summertime, it’s so nice. I haven’t been out there much other than the summer and the spring, but it’s a beautiful place to go in the summer for sure.

That’s cool! What else do you have going on? You did the X Games this winter, right?
Yup. I won the gold medal at the X Games. I think it was Para Snow Bike, is what my class was. They did Adaptive Snow Bike with amputees and stuff like that. It was awesome. It was kind of a crunch time. I’d been asking for a bike from Yamaha for a long time, and they gave me an ’18 to use, so I was kind of in a rush to get that thing built. We just rushed it and built it really quick. It was kind of one of those things where we were all working really late and I didn’t get a chance to really ride much. Usually I try to go out there, hit Minneapolis because they have a practice track and stuff and ride there, and then go to Wyoming or somewhere in Colorado and just do a bunch of riding. This year we were just so far behind, I didn’t get to ride a whole lot. It was fun. It was just such a blast. It was a lot of work but it was so much fun, especially because I really wanted to win that one there, and I got it so I was super happy.

That was pretty cool to come out and do it without even being able to ride the thing. Have you converted that bike back to a dirt bike now? What are your plans for the summer?
Yes, I converted it back to a dirt bike this spring. I rode it a couple times. I still have to get a feel for it though. It’s kind of cool to develop a new bike, and I enjoy doing that. I got a good deal going with Kenda Tire right now. They’re really supporting me this year. So I got their tires and I’m trying to play around a little bit with their tires and get used to that thing, but for me the bike is nine years newer than my last one! It’s such a change for me that I’m still just trying to get used to the bike in general, but it’s awesome. I love it. I’m trying to get a ’19 so I can have a race bike and a practice bike, but I haven’t been able to get one yet. We are pushing all the buttons, but nothing seems to come out of the dispensary!

Your last bike, you had that for a while, right?
Yes, nine years. That thing went through a lot of hours, that’s for sure. And they were pretty hard hours! It’s been rebuilt many, many times, but it keeps on going. That’s Yamaha reliability for you!

What else are you up to?
Actually, I’m pretty psyched about the project coming up in a few weeks. There’s this guy, Frank the Welder. He’s a well-known guy in mountain bikes—he built bikes for Yeti. Back then he built my Spooky downhill mountain bike that I raced in ’99. So, I actually raced—they’re called bucket bikes. It’s basically a downhill mountain bike that has a little e-motor. The e-motor works awesome. It’s a company called Paradox Kinetics, and they make it so it’s just a little assist for most people, but for us it’s everything. It’s powerful enough to get us around the mountain, to get up to the lift, get back to the car, go wherever we have to go on the bike. It pulls us around. One battery will last all day for doing downhill stuff. It’s kind of like the dirt bike. You just strap yourself in. I don’t have any cage or anything, but I do wear quite a bit of padding. You strap yourself to it and you go downhill. It’s so much fun.

Wow, that’s really cool. I knew you were doing some downhill stuff for fun but didn’t know the extent of it.
I worked with GT last year and I’m going to work with them again this year, but I connected with this guy Frank, and we’re going to build some one-off bucket bike specific frames for people in my situation who want to be more aggressive racing downhill. The bikes we have now, we can ride them decent. We can go pretty good on them, but they’re just not set up, I think, for what they could be. So I’ll be working with Fox Racing, their air suspension company. I’m working with them to build a seat shock along with Frank and GT. I’m building this bike in June, and I’m coming out to California to Big Bear in September, the Fox US Open. It was in Killington last year. They have it a few different places. I think it’s similar to the US Open that they did for motocross years ago. It’s just a big ride, big race. They’re having it at Big Bear this year. So in September I’ll be out there with this new bicycle racing that downhill race. That’ll be fun, and I am really looking forward to that. I recently also went to Michigan to do an adaptive motocross race. One of the adaptive riders put on a race out there and I wanted to support that.

But aside from that, I have been just staying busy, doing a bunch of different stuff. I am not really doing so much at the farm though. I was working hard trying to get the brewery thing going, but that fell through, so I am back into doing more of the stuff that I love to do. So I’m just sort of getting involved with a lot of different types of racing and different types of events, and just trying to enjoy it all. I am also enjoying the travel a little bit as well. Both my kids are now out of the house, so I guess they would call me an empty nester. It kind of gets me a little itchy to go do stuff because I don’t really have to be at home right now, not like I used to be and with the kids grown and doing their own thing. It’s easier to sort of escape and get out now.

It sounds like you’ve got a pretty busy summer going on. I hope that we do see you at a couple of the nationals this summer. I assume you’ll be at Southwick, too?
Yup. Probably go to Southwick, Unadilla, and that’s about it. I may go to one more, but I don’t know. We’ll see.

What’d you think of this year’s supercross series, and what do you think for the nationals? What are your predictions?
I thought the series was awesome. I loved how everybody sort of had a shot at the title, I felt like. Everybody was right in there. I think what it always shows is that consistency in supercross titles is so important. It’s just so important. Those one or two bad races…one bad race nowadays you’re kind of done. I loved it. I thought it was exciting. I loved everybody, all the top guys. Coop [Cooper Webb] and [Eli] Tomac and [Marvin] Musquin, [Ken] Roczen, all the riders. I felt like they rode well. They all had good races and good little spurts of speed. It was exciting to watch. For the outdoors, I think Tomac is for sure hands-on favorite, but who knows what Webb and Kenny can pull off. It seems like Webb is not quite as comfortable on that bike as Eli is in the outdoors. Not that I’ve seen him ride it a whole lot, but I just think Eli had that comfort factor and that confidence factor, as does Kenny. I’m sure there’s going to be some new winners. I know Musquin’s going to be fast. But I think overall consistency for the title, I would have to go with Tomac.