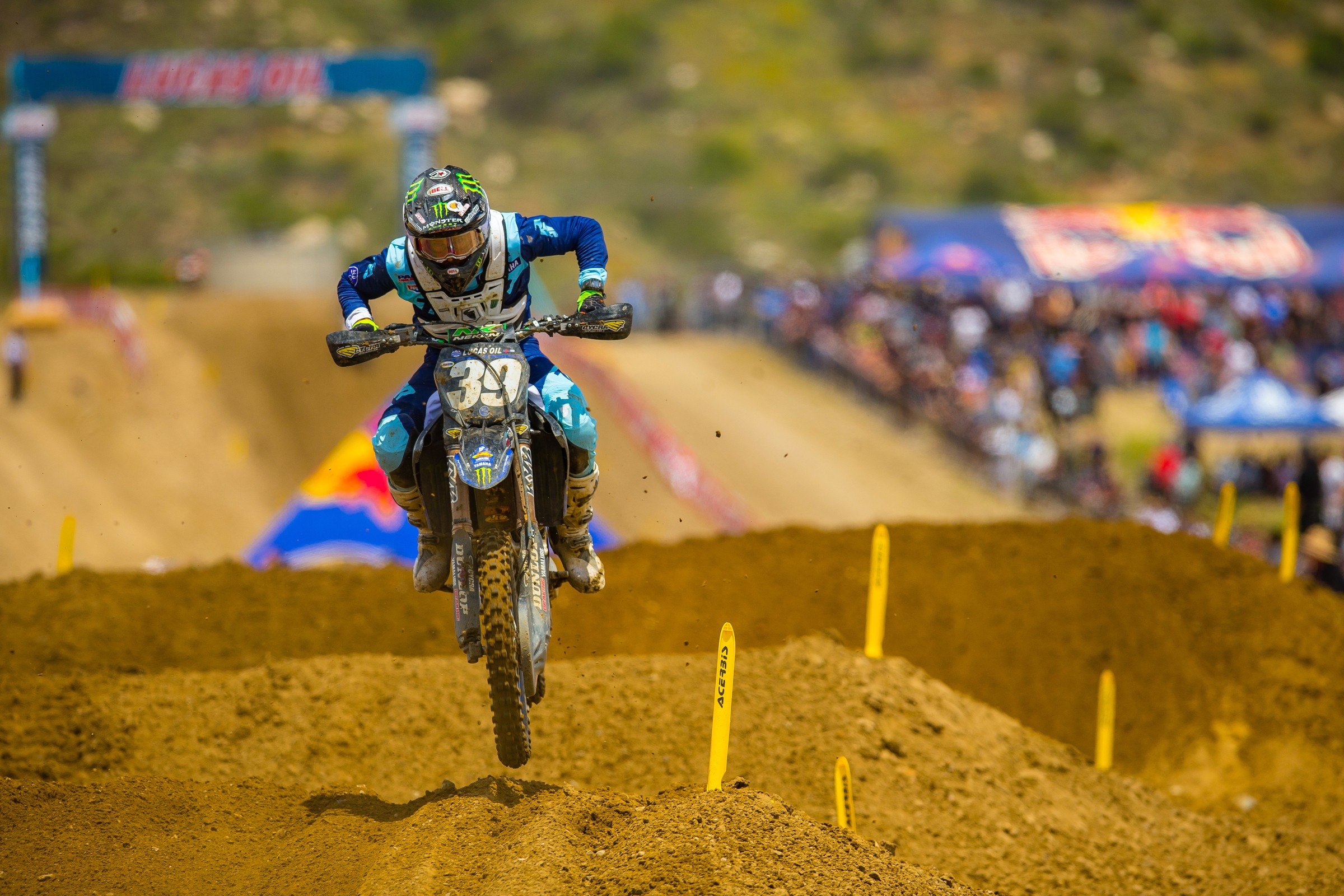 “I feel like I’ve had such a good supercross year that I want to do the same thing outdoors,” Nichols said. “I want to be on the podium and a contender and I really think that I can do that. I feel great coming into this season.”

Racer X: Okay, Colt, thanks for taking the time to knock this out. So what do you have going this Memorial Day Monday?
Colt Nichols: We had a little bit of a bike ride this morning, followed by [the] gym, and then we had yoga right after. A little bit of a busy morning, but we got all that stuff done and now I’m going to [get a] handful of Monday things done. Just getting it all handled.

What’s yoga like for you? It certainly doesn’t like a bad idea for a professional motocross racer.
It’s good, man. I’m getting a little better and a little more limber and what-not. Yoga is an area that kind of gets overlooked a little bit with what we do, but it’s really important in keeping us limber and helps us in making sure make sure that we can move around on the bike in ways you need to, so I’ve been trying to focus a little bit more attention on that the past two years of my career.

Do you think it helps?
I really do. I’m a believer. I like doing it. I really do.

Makes a lot of sense. Stepping back a bit, you ran to 4-7 moto scores at Saturday’s Lucas Oil AMA Pro Motocross Championship at Fox Raceway at Pala to place fifth overall. In retrospect, what did you make of your performance here in Southern California?
It was good. It was good and bad. You know in the first race I ran second with literally two laps to go and it was kind of tough. Justin [Cooper] and I started one-two and we were kind of doing the back-and-forth a little bit and he opened a little bit of a gap up on me and I was kind of out there in no man’s land and kind of riding by myself. However, we were able to close that gap between us and I tried to find as much as I could and then made a few little mistakes that pushed me back, but I ended up getting fourth. It was still a good moto and I was happy just to be in the battle and to be in there. I was bummed that I couldn’t finish it off with a podium finish. At the start of the second moto, the gate flinched and a bunch of us ran into it and I just started way too far back. It kind of took me a little while to get going. Ten or 15 minutes in I started moving and I started picking off a lot of guys and fought my way all up to seventh. I was happy with the end of the moto. I felt like I rode really well to get fifth overall. That’s still good, all things considered. I always want more and I feel like I’m in a really good position with the bike and team and it’s really good right now. I just want to keep striving forward and see where we land the next race weekend.

Yes, and as you alluded to, as far as the team and bike and all that comes with that, it seems like your house is very much in order. I looked over your results from 2018, and I know you only competed in 11 races, but still, your results were consistent.
Yeah, and it’s getting better and better and better too. Just having more time at this level is the biggest thing. Having a healthy off-season before 2019 started was the biggest thing for me. After that, it’s just experience. You look at a guy like Aaron Plessinger and he started training with Gareth Swanepoel, and up until this year, I don’t think he missed a single race. He might have had a DNF at a race or crashed out of a moto at a race, but he was always there. You just really can’t take that for granted, man; you can’t speed up that process. It’s tough to gain experience when you’re not there, and for the past two or three years, I haven’t been there. This year, I was able to have a healthy off-season and I was actually able to build a base for coming into these two series, supercross and outdoors, and it has just been really good. I credit that to a healthy off-season and just being able to work with Gareth Swanepoel. I’m happy, man. We’ve made strides forward and maybe even surprised a few people along the way. That’s okay with me. Still a lot of room to improve and that’s okay. We’ll just keep getting better.

Yeah, since I’ve known you, you’ve sung Gareth’s praises. From where I’m standing, it seems like you two guys do quite well together.
I feel that we have a really good relationship. It’s tough with the trainer and rider-thing. Every now and then you disagree or you bicker, but for the most part, I feel that we mesh really well together and that our personalities work really well together. He’s started to figure me out a little more and I’m trying to figure him out more. In 2017, when I first came on-board in the pro ranks, I had already worked with Robby Reynard for ten years. It was a family-like atmosphere, and then switching trainers and going to Gareth, it was like we just didn’t know each other immediately. It just takes time to make the necessary improvements. You learn and grow together. Overall, I’m really happy with the direction we are going and how I feel on the bike and off the bike. All that stuff is getting better and better and I can’t complain.

Yeah, and to come out and win the opening supercross round at Anaheim and then wind up third in the championship, man, that had to be confidence-inspiring, huh?
Yeah, it really was and just for the simple fact that I obviously hadn’t done it before. Anytime you can check something off the list that you’ve never done before, it’s a good thing and it immediately boosts your confidence and makes you feel like you can do it again and again. Unfortunately, I’ve only been able to win the one race this year and that sucks, but at least I was able to check that off the list and now I can say that I’ve won a race. My biggest thing entering the season was that I wanted to be a better starter. In years previous I was horrible off the gate. That’s gotten much better. I’m just trying to learn, man, and to just get better and better and better. It’s a short-lived career that we have and I don’t want to waste any time and play the what-if game. Having said that, I really did a lot of different things to up my program this year. I went and hired a sports psychologist and upped my training program with Gareth. We just did a lot of things to improve from last year and make a full season in 2019.

I’ve known you a while now and feel like you’re one of those racers who are wise beyond their years. Furthermore, you’re a professional in trying to incorporate some of these other elements into your overall program. There is something to be said for that.
Yeah, I mean I hope so. All of us who race work really, really hard. We all train hard and ride and do all this stuff, but at the end of the day, I don’t want to look back in five or ten years and think, “Yeah, I know I struggled with this and that.” I want to be able to hang up the boots one day and felt like I gave it everything that I had and that I did everything I could to better my racing. I want to retire and feel like I left everything out there.

You’ve performed quite well these first four motos into the Lucas Oil AMA Pro Motocross Championship. How do you feel about your place in the grand scheme of things so far?
The competition has been very good this year. I feel like I’m really good in outdoors and haven’t really shown my full potential yet. I really do feel I can go for the title and go out there and win races and to be right in the hunt. That’s 100 percent the goal. I want to be there every week and be right in the middle of it. And if I can walk away with a championship, I’d be really pumped.