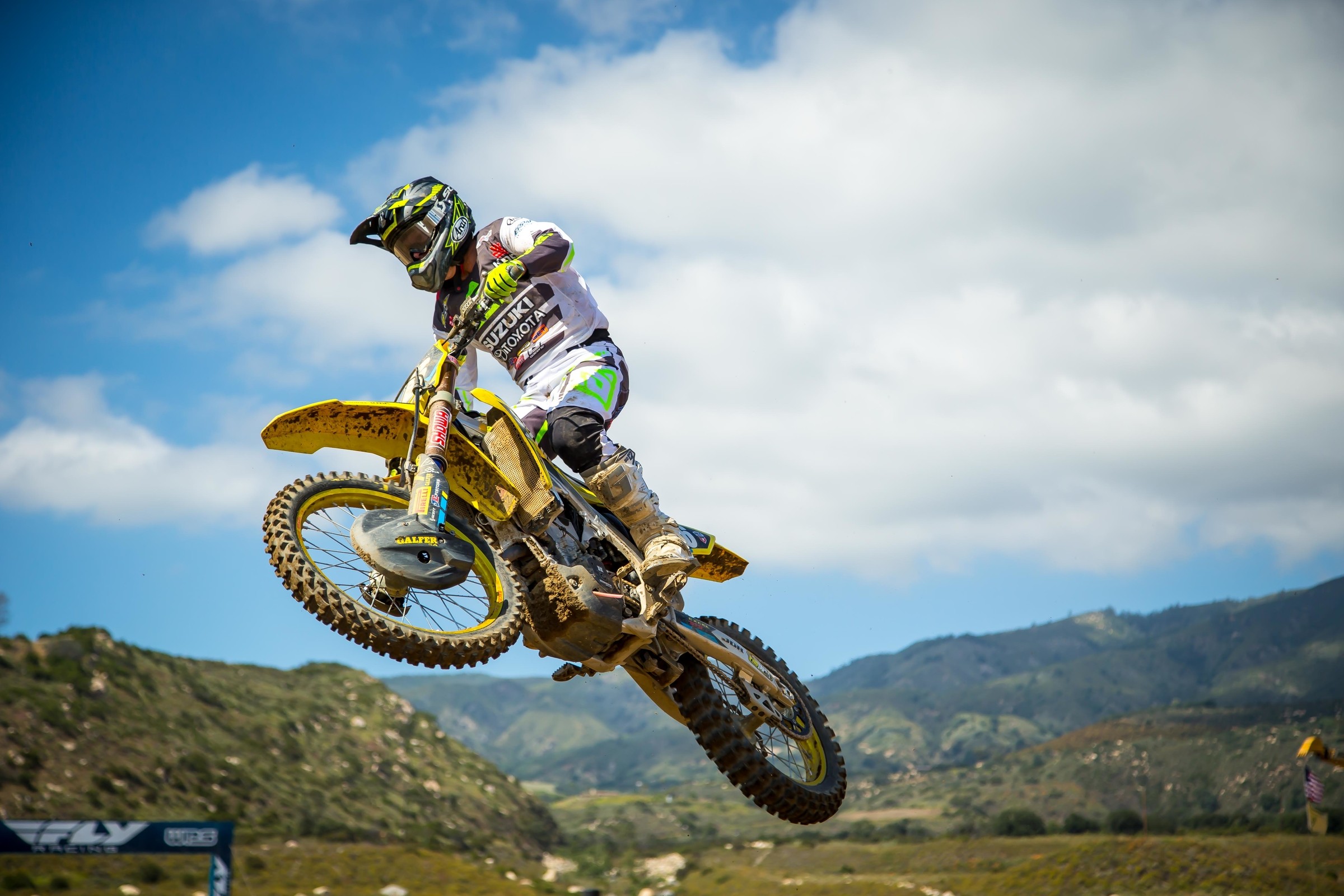 Place finish for Fredrik Noren in the 450 Class at Fox Raceway at Pala. He was the highest finishing non-factory rider.

Holeshots by KTM riders through the first two rounds: Cooper Webb, Marvin Musquin, Blake Baggett, and Justin Bogle each have taken a holeshot.

Place finish for Rocky Mountain ATC/MV-KTM-WPS’ Blake Baggett, who crashed in the first 450 Class moto. Baggett, who had to pit and have a front wheel change, finished 33rd in the first moto and finished 14th in the second moto—only earning him seven points on the weekend.

Points for Tomac through two rounds of the 2018 the Lucas Oil AMA Pro Motocross Championship.

Points for Tomac through two rounds of the 2019 the Lucas Oil AMA Pro Motocross Championship.

Overall wins in the 250 Class for Cianciarulo this season.

“I didn’t the best starts today and just struggled to work my way to the front. I feel like I rode consistently but not at the pace I needed to be at. I’m looking forward to getting back to Florida and getting back into the routine of things this week so we can come out swinging at Thunder Valley.”

“I was super bummed after Hangtown and didn’t want to feel that way again. The experience really motivated me. I’m starting to put my best foot forward. This is a new mindset, so it will take some time to get where I really need to be, but I’m excited to build on this weekend and see where we can go.”

“I didn’t get a great flow in the morning and didn’t qualify my best, but going into the moto I knew I would do better. Ended up finishing seventh In the second moto, where the track got even more rough. I’m still building up my fitness and getting stronger coming off of my injuries from earlier this year. All in all it was a decent weekend. I’m glad to leave Fox Raceway healthy, but definitely looking to keep improving and getting better. I’m looking forward to Thunder Valley, I usually do good there.”

“My starts really held me back today. I was happy with my riding and how I felt on the bike, so it’s a bummer my results didn’t reflect it more. In the first race I got a bad start and went down on the second lap. I spent the whole race trying to just make up as many spots as possible. I got another bad start in the second. You can’t put yourself in such a bad spot in the beginning and expect to get a solid result. I do think I did a decent job making up positions and was happy with the intensity and pace I held. My fitness is definitely coming back, so there were some positives to take away from the weekend.”

“I feel like I started the weekend solid, making improvements. First moto was pretty solid and had to dig pretty deep for that one. In the second moto, I got more comfortable with the settings and was pushing toward the front. I ended up having a crash but pushed as hard as I could. All in all we are making progress and will keep working toward improving.”

“We had some long testing days and I think it paid off, I felt a lot better than last week. My starts were not there this weekend. Second moto, I came from last to trying to pass for third but ended up falling over. Then I had to go back to work on [Justin] Cooper, and I think he got a second wind and I did everything I could but I couldn’t get him. Coming from that far back, you spend a lot of energy. Fifth overall is okay, we’re making progress, kind of the same way we started the season in supercross. I feel like I should be battling for wins, and I was up there in the first moto, I mean, I got fifth and was only 3.8 seconds behind the leader! So I can’t be too upset. We’re looking forward to Colorado making a few adjustments on the bike, but not too much.”

“Overall a little disappointed with how the day ended up after feeling really good, but we get to try again next week. My bike was great and I’m really happy with the progress we made this past week. The track was tough today, mostly because passing seemed to be hard. Everyone was getting jammed up a bit at times. I’m really looking forward to next week and am ready to head back east.”

“This was a much better race for me, even with the bad starts. Knowing I was able to come through after being so far back gives me motivation for the upcoming races. I just need to nail down my starts and we’ll be right up there fighting for a podium.”

“Bitter sweet weekend here at Fox Raceway. Started off the day solid with third and fourth in the qualifying sessions. First moto had a good start and worked my way into third and then a rock broke my oil filter cap so all the engine oil was draining out and it was dying on the lap just before the accident with Smith happened [Jordon Smith and Lawrence came together and both crashed]. The crash didn’t cause the bike problem, it was already happening, and then it locked up on the downhill where we came together. Lucky to have no injuries.

“The next moto was cool! Average start from all the way outside and worked my way up to first. I was really feeling it, but I washed the front wheel out and ended up second. Such a big week and I want to give a huge thank you to the team, we rode five days in a row this week, with three big testing days to improve the bike from last weekend, then press day and then race day so it was a big week for us and we are happy to see it pay off in relation to speed and how the bike handled!”

“Felt really good all day and was happy with my bike. First moto I didn’t get a great start and struggled the first couple laps. I hung in there and just started flowing, late in the moto was so much fun. Top five finishing within four seconds is crazy! I was definitely happy with the second [place finish].

“Second moto the gate flinched so a few of us hit the gate. One hundred percent, that race should have been red flagged. The whole first lap I was expecting a red flag, and I was not happy that it didn’t come out. So my start was terrible, and then as I was making my way through the pack, AMart [Alex Martin] got sketchy and I just happened to be in the wrong place at the wrong time, he smoked me and I ended up going down pretty hard. When we hit he broke my water pump which caused the DNF. A lot of positives from the weekend and could have been a different ending with a red flag. Oh well, heal up and be ready for Colorado!”

“Overall, I had some good improvement from the first round. Worked my way to sixth in the first moto and felt good. Second moto I got a terrible start but worked my way to around ninth but unfortunately had a second-to-last-lap crash which forced me to lose a couple spots. Would have had a solid overall if I hadn’t crashed but overall I’m happy with my improvements and look forward to next weekend!”

“The track was tough today and I am still pretty sore from my crash last weekend. I did my best to find smooth lines but on a track like this you’re not going to find that. I am happy to see the progress in moto two and will look forward to Denver to get back in the top ten.”

“I was happy with my riding the first moto. I think it was smart and solid but I got a bad start and had to work my way up. The second moto—talk about adversity. I got a great start and then just went downhill from there, but I’ve been taking every moto as a great experience to learn and move forward.”