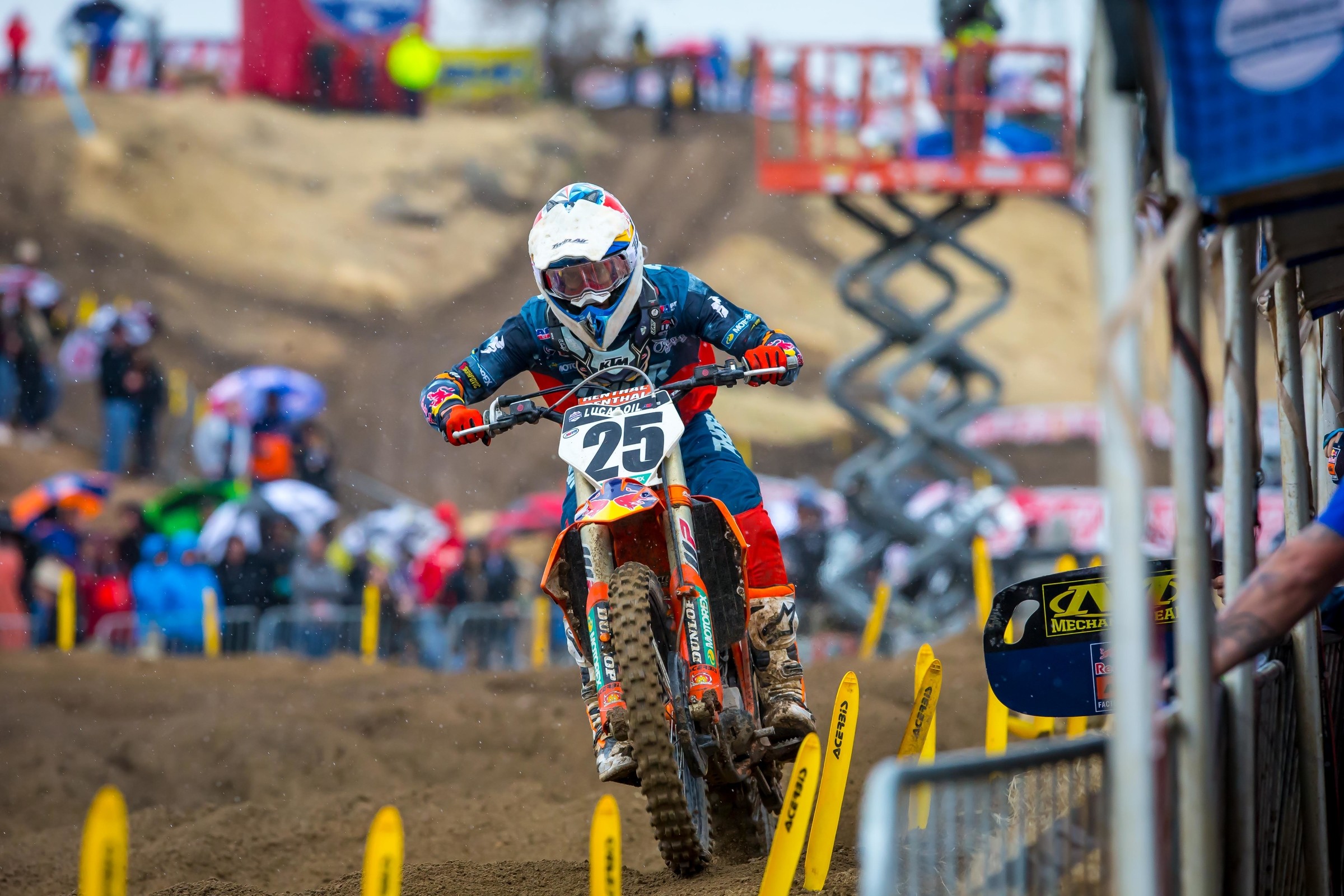 Zach Osborne was fantastic in his first 450 Class motocross race last weekend. He ran as high as fourth in the first moto before a small mistake relegated him to fifth, and after going down on the first lap in the second moto, he rounded the first lap way back in 16th. Still, he was was able to charge his way back up to third on a slick and muddy track that had plenty of skilled riders tiptoeing around. His 5-3 scores earned him fourth overall, and had he not gone down at the end of the first moto he would have been on the overall podium. That’s excellent, especially for his first race in the class! If he’s on the same level this weekend and gets good starts, he’ll be dangerous. –Aaron Hansel

Ironman National, 2016. Before Hangtown, that was the last race Ken Roczen won, which put an exclamation point on a ridiculously dominant season (20 of 24 motos). Had you told us two entire seasons of the Lucas Oil AMA Pro Motocross Championship would elapse before he won again, we would’ve towed your car and had your AMA membership revoked. Yet, thanks mainly to terrible injuries, that’s exactly what happened. Fortunately for Roczen, he’s got what must be an endless supply of sheer determination on tap, which helped him finally get back in the winner’s circle last week at Hangtown. Will he go back-to-back this weekend now that he’s got that first, streak-snapping win of the season out of the way? –Hansel

If you’d have told Jason Anderson he’d end up with a top five at Hangtown he probably would have been pumped. Had you told him he’d be on the podium, he probably would’ve hired you as his hype man. After all, he hadn’t raced since January after sustaining serious injuries while practicing, so to podium his first race back in gnarly conditions seems like a bit of a pipe dream. But that’s exactly what happened—Anderson was third overall via 2-5 moto scores. If he’s already this good in his first race back, will he be even better in his second? –Hansel

When Garrett Marchbanks was fastest in practice at Hangtown it looked like he might just be poised for a breakout ride. He ended up eighth in the first moto, but things came apart in the second moto. Afterward, Marchbanks admitted he had a tough time in the rain and mud, which led to the Monster Energy/Pro Circuit Kawasaki rider making some “big mistakes.” Fortunately for Marchbanks there isn’t any rain in the forecast for this Saturday, which means he’ll have a clear day to try to produce that head-turning ride he might have had at Hangtown. –Hansel

You’d be forgiven if you were surprised at how well Adam Cianciarulo rode at Hangtown. Not that he isn’t speedy or incapable of bagging wins, but after crashing away the 250SX West Region championship two weeks prior in Las Vegas, it’d be understandable if he wasn’t on his mental A-Game in Northern California. Thing is, he was, and it showed. After losing a battle for the win with Justin Cooper in the first moto, Cianciarulo kept his head in the game, saying a second was as good as a win in the first moto when it comes to the overall. And when the second moto rolled around, he proved himself right by busting out a wire-to-wire victory to secure the overall. With his Vegas heartbreak seemingly behind him, you can bet he’ll be on the hunt for another win at Fox Raceway. -Hansel

Monster Energy Kawasaki’s Eli Tomac won nine of the first 11 motos in 2018 en route to a second straight 450 Class title. While he didn’t win the overall last weekend, he did win the second moto and took second overall. Not a bad way to begin a quest for a third straight title, but he wasn't happy with that first moto on a dry track. “The first one was disappointing,” he said after the race. “I was just kind of off the pace and made a good charge up to the halfway point there. Then kind of shot off the back in that first moto. Made a few changes but at the same time it was obviously with the track conditions in moto two, it took a little while to get going.” Can Tomac get his first overall of 2019 this weekend? -Chase Stallo

In just his second year, Justin Cooper is rapidly becoming a legit title threat. That was expected, though, if you watched him last year. At the opener last weekend, he led all 15 laps of the first moto en route to the win. While he finished fourth in the second moto, it was still good enough for second overall. “The feeling was indescribable. It was awesome,” he said after the race. “I got a great start. I felt so nervous going into that moto. The first moto of the year. You’re like, wow, we’re here. We’re doing this now. It was great to get a good start and just pacing everyone. I pumped up as well. The track was a little awkward out there.” You’d think he'll be much calmer this weekend, so expect more of the same from the second-year pro. -Stallo

For the first time since 2011, the Lucas Oil AMA Pro Motocross Championship returns to what is now known as Fox Raceway at Pala. Even though the race has been gone for a few years, it is still very much a home track for most of the riders, as it serves as a regular practice/testing/training stop during the week. “That’s all that we ride when it's open, as much as two times a week when training outdoors,” Justin Cooper told us this week. “It’s the best local practice track in Cali for sure, no doubt. It can be hard to pass on, though.” We’ll see who takes advantage of home conditions tomorrow. -Stallo

We didn’t see the Marvin Musquin we’re used to seeing at Hangtown last weekend. Musquin had a big crash in practice and struggled to a sixth-place finish at the opener. “I was super sore after my crash in practice but I tried to regroup and get as better as I could before the motos but the first moto was tough,” he said. “The feeling was not good and the start was not there, so I was battling with myself, basically, and then the track—I couldn’t find a good flow or rhythm.” Can he bounce back this weekend? -Stallo

Thomas Covington has had a tough start to his career in the U.S. After a rough start in supercross, Covington eventually sat out the last few rounds. The expectation was he’d bounce back outdoors, but it didn’t come at the opener, as he failed to score points in either moto (27-22 for 26th overall). Covington is a former Grand Prix winner, so you know he’s better than what he showed at Hangtown. We’ll see how much he improves tomorrow. -Stallo