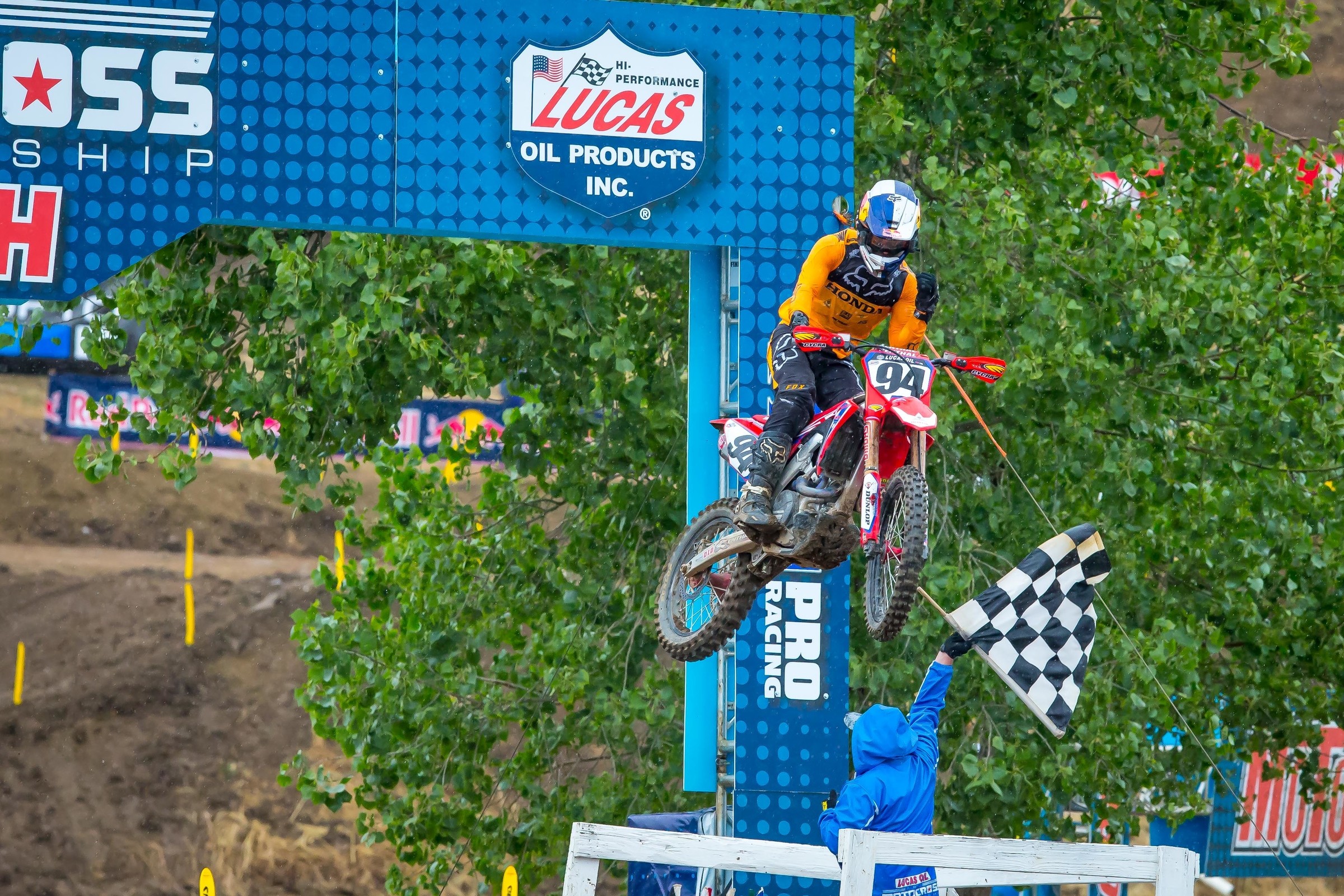 In celebration of such a historic event, the trophies for the 51st annual Bell Helmets Hangtown Classic, were emblazoned with the words “Feels like the first time.”

Ken Roczen came across the finish on Saturday to take his 1-2 scores to the overall win, his first overall in the series since August 2016, and the first race weekend where he has left as a race winner since the San Diego Supercross on January 14, 2017. The next weekend, his injury run began, and although he’s won a few motos, heat races, and supercross Triple Crown events since, an out-an-out race win in the record book has eluded him.

Everyone has pictured Ken Roczen finally winning again, followed by a flood of emotions, tears, confetti, champagne, fireworks, and more. There have been documentary videos planned and shot around Ken finally climbing back to the top of the mountain. Ken has ridden well for a long time, but with so many near-misses and race wins ripped from his grasp at the final moments, sometimes by other riders, sometimes by sheer fate or luck, it feels like this has taken forever to final happen.

So after all of that, it appeared this Hangtown victory would take on a “Feels like the first time” moment for Ken and the crew that has stuck with him. While this was indeed exciting, but it didn’t feel like the Hollywood movie you would have expected.

That’s actually for a better reason. This win felt repeatable, as in the start of a championship run, not the end of a long comeback.

“Honestly, it almost feels like back to business, back to winning,” said Ken in our Best Post-Race Show Ever from Hangtown. “I’m super excited. It’s been so long, but at the same time, I want more, I’m thinking bigger picture. We’re going to enjoy it, we’re going to go to dinner tonight, enjoy today and tomorrow. But overall, I’m just happy right now.”

The Hollywood story would have Kenny’s first new win come after a long day of struggle and battle. That’s not often how this sport works, though. Often the harder you struggle the worse you do, while the victorious days feel like the easiest of all. Further, Kenny has been dealing with an illness for months, so he wasn’t feeling as prepared as he wanted to be coming into the race. No one knew what to expect.

It all came so easy, though. Roczen doesn’t stress qualifying, but he edged two-time and defending 450 Class National Champion Eli Tomac for the fastest time in the first practice session by three hundredths of second. He was fastest by three tenths in the second session. Then came moto one, and Roczen got a decent start, but miraculously shot to the front of the pack in an instant. It was scary fast—Ken blew through several contenders in just a few corners, finished it off with a quick pass on Red Bull KTM’s Cooper Webb, and took off. He cruised to a moto win by about 20 seconds. It was mega, but it looked mellow.

In a muddy second moto, he knifed into the lead immediately again, but Tomac found his groove and got Kenny back. From there, it was a matter of staying out of trouble to lock down the overall. On a slippery track, there were potential pitfalls everywhere, but finally the racing gods came through for Roczen.

While so much has changed in his life since his 2016 championship season, things kind of looked the same. He was back to his old effortless style, staying above the bumps and floating around the track like he did in 2016, an underrated season of domination which featured 20 moto wins in 24 starts. Further, Kenny feels there’s much more to give, more speed, better bike setup, and all.

“It’s kind of just race instinct, and it felt like 2016, I never felt like… just the gate dropped, I was comfortable, and I just went. Now, today I wasn’t too comfortable, things could have been better, but every time we went out, we did the best we could. I could have been bitching about the bike and then just ridden around. But we didn’t.”

Ken thinks he can go even faster, but since he’s still dealing with some physical issues, it’s hard to predict how this season will turn out. But this didn’t look like one magical afternoon. It seemed like a normal day at the races, and Ken was just the fastest rider in attendance.

In this case, the comeback now features a win. Looks like there’s good odds it’s going to contain a lot more.