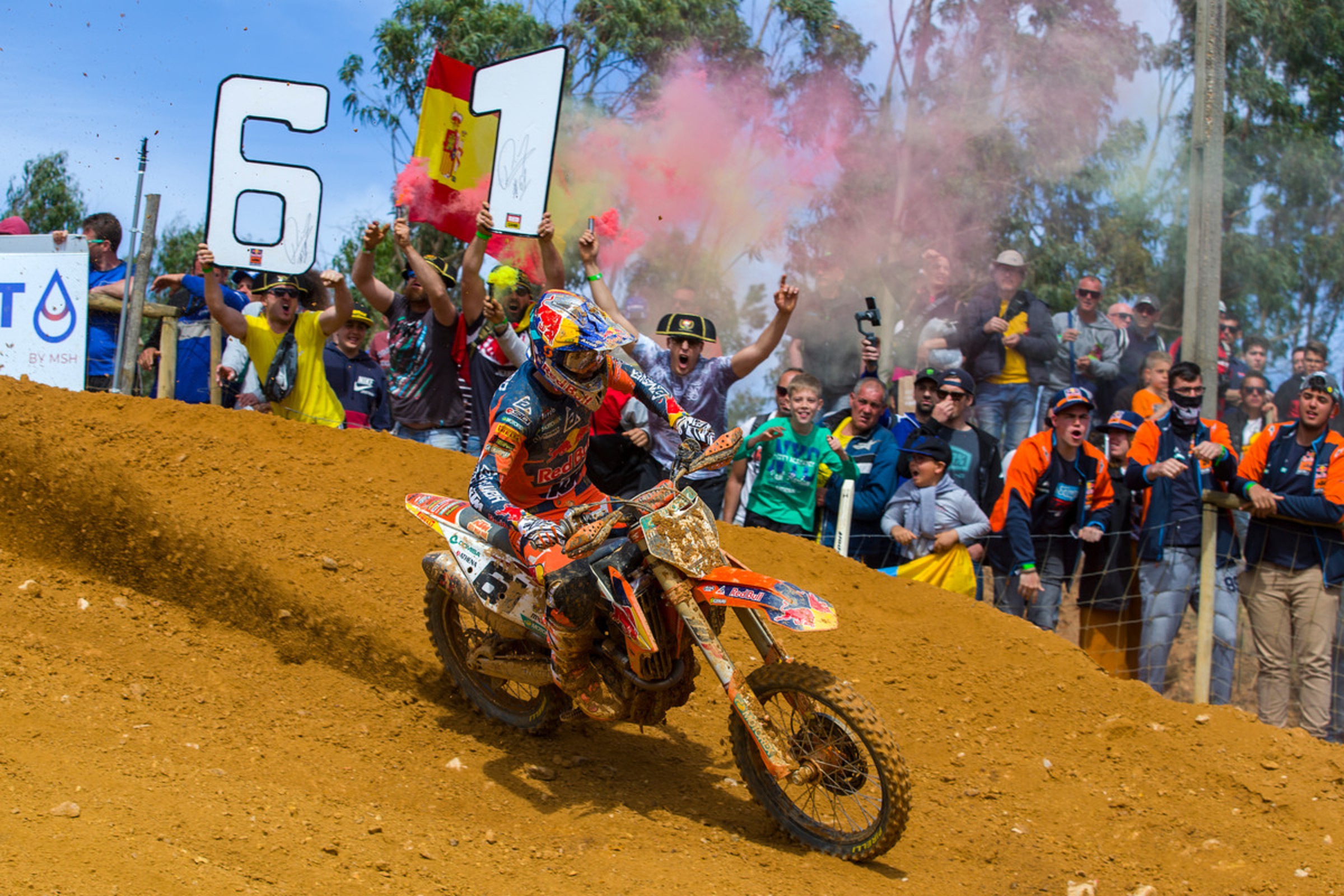 GP Report 3 Talking Points From the MXGP of Portugal

After the sludge of Italy, MXGP thundered back to speed around the sunny climes of Agueda for the Grand Prix of Portugal and Tim Gajser wrung out the misery of Mantova to fire back to victory in fine style.

For the third week in a row MXGP swung between the brilliance of two riders. Gajser claimed his first win of the season at the Grand Prix of Trentino for round four in early April. Red Bull KTM’s Antonio Cairoli then retaliated with perfection in the sodden sand of Mantova and Gajser swiftly revived his 2019 chances at the sixth fixture of the year in Portugal last weekend. Here are a few talking points from a welcome dose of sunshine on the western tip of Europe.

The Slovenian did not reveal much about the period immediately after the Grand Prix of Lombardia seven days previously. At least six crashes in the Mantova sand pushed him outside of the top five and was another of the occasional moments of madness that seems to handicap the 21-year-old. “Last weekend was tough so I tried to forget it immediately and focus on this one,” he described. “My riding was a bit smarter today and I was trying to find good lines and attack.”

And attack he did. Gasjer’s powers to forget a poor weekend are obviously strong, as evidenced by the way he stalked the in-form Cairoli. The Agueda circuit was quick, spectacular, and asked a lot of suspension and bike set-up.

“The track was very strange and a lot of people were very fast but it was actually quite technical,” Cairoli assessed. “We saw that everybody was very close in the times. Tim and I could push in the last laps to make the difference but [it was] less compared to other tracks. It was fast and you could carry a lot of speed and momentum. In one side it was fun to ride and in another it was difficult to make time.”

The intensity was gripping. Gajser was ready to capitalise at any moment should the championship leader falter and when Cairoli momentarily stalled his KTM deep into the first moto, Gajser had his break. The last five minutes were riveting as Cairoli gave chase to a rider 12 years his junior. Gajser was forced to set the fastest lap of the race on the final circulation to keep the KTM man at bay.

Tony was unable to smile easily after the second moto when the pair resumed the chase once the resurging Monster Energy Kawasaki’s Clement Desalle had been dealt with (the Belgian is a former three times winner at Agueda). Another mistake gifted Gajser the initiative and the Honda man gladly accepted. The end result was a second success of 2019 and a six-point slice of Cairoli’s advantage of 40 at the top of the standings. “It was good racing,” grinned Gajser, whose utterly likeable demeanour belies the aggressive and forceful presence he can show on the factory Honda.

“In one side I’m happy because the goal is to always be on the podium but in another way I’m disappointed,” Cairoli offered. “In the second moto I made a silly mistake and I stalled the bike. In the second I was swapping lines. Where I crashed was a lottery, there was a lot of mud and I chose another line at the last moment and there was a rock that twisted my front end. I’m happy I didn't hurt myself. Tim was very fast and Clement is always tough to pass.”

In the general picture, Gajser has already weathered some fast and hefty crashes in 2019 and the big question persists as to whether he can remain in this kind of condition to regularly challenge Cairoli. The Sicilian’s biggest attribute is his consistency and ability to forge a podium finish even on glitchy days like Portugal. Gajser, and the rest of the MXGP field, have been striving for the better part of a decade to find the same sphere of performance. The rest of 2019 (and the part that riders like Gautier Paulin, a first lap-first moto faller here, Desalle and the returning Jeffrey Herlings) will depend largely on how Gajser and Cairoli manage their races, programmes, and damage limitation.

There was a fleeting “what if?” moment on Saturday. MX2 World Champion Jorge Prado was pushed and bullied by a rampaging F&H Kawasaki’s Henry Jacobi and Rockstar Energy Husqvarna’s Thomas Kjer Olsen in the qualification heat in what was a fantastic slice of action that could not have served a better preview for race day. Prado seemed vulnerable and mortal for the first time this season but his reversion to usual business on Sunday highlighted the folly of judging performances when relatively little is on the line.

His 1-1 meant eight moto wins in a row and 10 for the season: the 18-year-old is unbeaten in every race outing so far. Portugal allowed Prado—voraciously cheered by plenty of local support from across the border with Spain—to regain the red plate after Olsen hashed his second moto start (he still recovered to gain second spot overall).

Such is Prado’s superiority that images of Jeffrey Herlings in his MX2 pomp are starting to come to mind. Herlings posted 18 straight MX2 moto victories in 2014 and Prado is forming a similar platform. Asked if any kind of statistic is in the back of his mind the answer was clear. “Not really! Sometimes it looks easy but each moto is tough. You have to fight for 35 minutes and make everything perfect. Every time I win I think I enjoy it even more because there is so much behind [it]. I’m not really looking for any records. Getting to the end of the season with the red plate will be difficult enough.”

Prado still has the smile of a kid but he is even more mature physically (in 2017 at Agueda he had to retire from both hot motos through heat exhaustion) and has an inner self-belief that matches anything displayed by Ken Roczen or Herlings when they were learning how to decimate the opposition in their MX2 days.

As previously mentioned, 2019 will be one of the hardest seasons in Thomas Kjer Olsen’s career. The key to beating Prado is something the Dane is now actively searching for, and if he can translate his Portuguese Saturday display to Sunday with regularity then this will turn into a very rich dispute indeed.

MX2 might seem like a pushover but there are new talents bubbling through. 114 Motorsports Honda’s Mitchell Evans managed a second podium finish. The Australian had recovered from injury to again establish a front-running pace and the Portuguese layout—vaguely similar to the dips-and-weaves of the season-opening circuit in Argentina (where he first walked the MX2 box)—was clearly to his liking.

“I thought it was really cool with a good flow to it,” he observed. “I jelled with the track pretty fast. All the tracks have been way different. I’ve always seen the tracks on MXGP-TV and wanted to try them in person so it is cool to be here and experience it and I cherish this every weekend.”

Another Mitchell, this time Harrison, brushed the top ten and others like Roan Van de Moosdijk and Maxime Renaux (so highly rated in the EMX125 before injury disrupted his ascension) were firmly ensconced at the top end if the leader board for personal-bests in their short Grand Prix careers.

There is much to be admired by the serial success of athletes like Cairoli, Gajser, Prado, and Olsen but Agueda pushed forth scenes of refreshing emotion. To see Monster Energy Wilvo Yamaha’s Arnaud Tonus straining the YZ450F with relish and then making his first podium appearance in two years with a 3-3 on the day was a reminder that riders are not dispensable “throwaways.” Tonus has been through the mill in his MX2 Kawasaki days, his illness-wrecked Pro Circuit stint and then missed 2018 altogether due to double shoulder injuries but this vindication of his potential was heartening, and the Swiss duly celebrated.

“It is hard to find the right words at the moment,” he said afterward. “I have been through a lot and it is cool to be up here. I just want to thank Louis and all the people at Yamaha who stuck with me through the hardest time of my career. Being back up here is so cool and I am so thankful and happy.”

Tonus’ fourth place at Arco di Trento two rounds beforehand supported that notion that Agueda wasn’t a freak one-off. He had typical issues of a mudder at Mantova but Portugal was a recall that the 27-year-old has much to contribute. Understandably he has been race-rusty.

“I haven’t raced for a year so it took me time to set up myself,” he commented. “I had a good winter and everything went well but in the races I made some mistakes and was struggling a bit to pass and be aggressive. I think I really improved on that today.”

While Cairoli and Gajser set the pace, the progress of Tonus and others with their stories of comebacks fill another narrative strand. Desalle, Paulin, Coldenhoff, Monster Energy Yamaha’s Romain Febvre (eighth overall and racing again after breaking his right ankle at round one), and Herlings fill this mould, while the evolution of riders like Jeremy Seewer (impressive to fifth place on the works Yamaha) and Pauls Jonass (the rookie was sixth) are also watchable elements of the contest.

Starting prowess will be essential for the third weekend of action in a row. The atmospheric Grand Prix of France at the St Jean D’Angely hard-pack will be restrictive with viable passing opportunities around the tight and old-school layout.