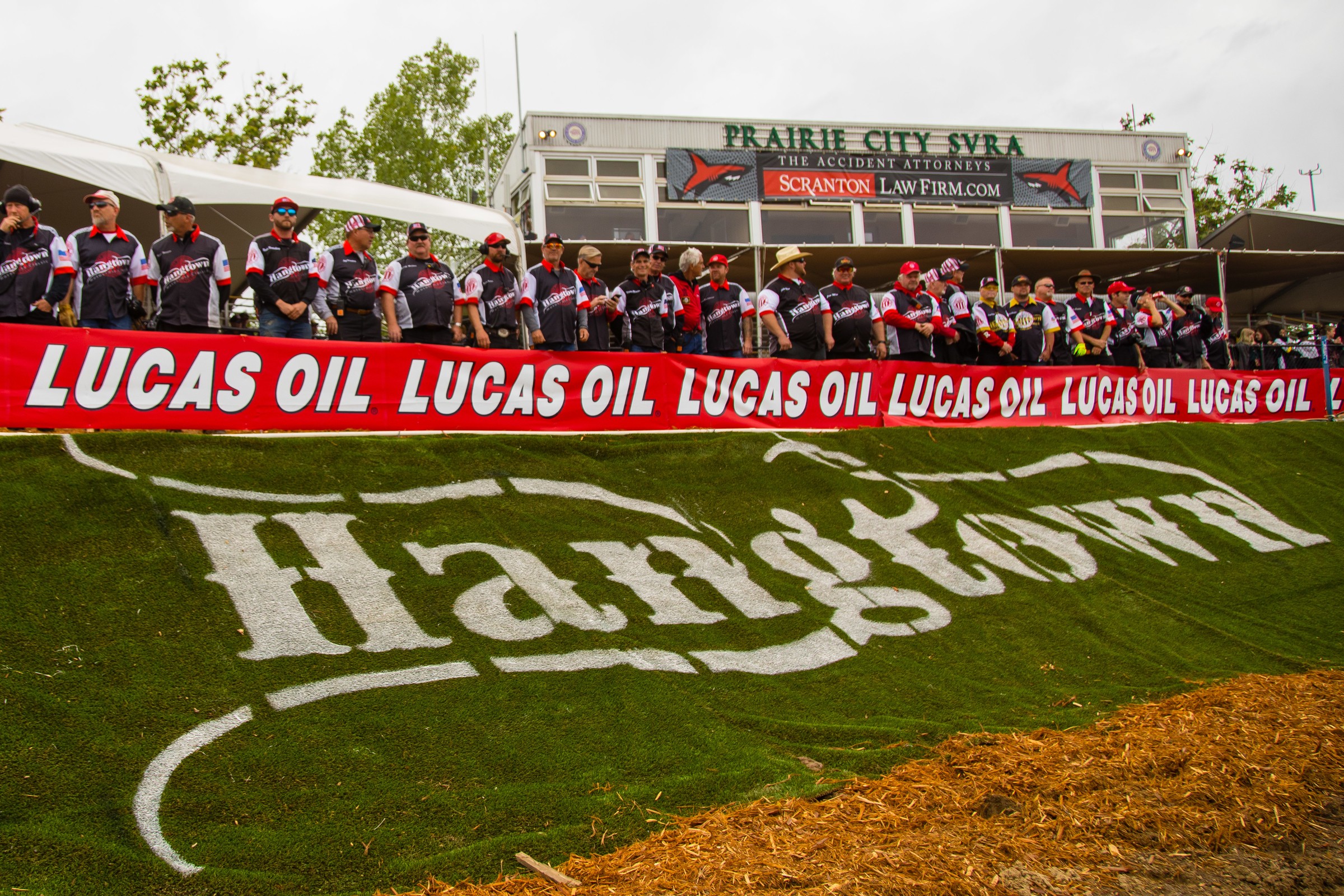 Opening rounds often have a way of creating more questions than they answer, and rarely is a glimpse of how the championship might play out offered at the first race. The same is true of mud races, so when the forecast predicted a very strong chance of rain for the Bell Helmets Hangtown Motocross Classic, the anticipation of a wild day of racing with crazy results ramped up quickly. But was the action as outrageous as imagined? Let’s dive into this week’s Saturday Night Live to find out.

The racing itself wasn’t especially wild, but the results, while not shocking, were a bit of a change of pace from what we’ve seen in recent times. In the 450 Class it was Ken Roczen taking the win via 1-2 moto scores, which certainly isn’t a shocker, but it’s also probably not what most people expected coming into the first round. After all, Roczen is fresh off a supercross season in which he wasn’t able to get a win, and he hasn’t won a motocross race since the absolute trouncing he handed the competition in 2016. Afterward Roczen talked about how good it felt to get another win after going through two potentially career-ending injuries.

“It’s been a very long time, and overall the whole day was good,” Roczen said in the post-race press conference. “It’s difficult to know what to expect at the first race, but every time I went out there I just did the best I could. I got the overall and I’m very happy. Especially considering how muddy and sloppy it was. It can go the other way too.”

If Roczen finally winning again wasn’t feel-good enough for you, how about a win from Adam Cianciarulo in the 250 Class? Just two weeks ago Cianciarulo, who, like Roczen, has dealt with plenty of heartbreak and injuries, experienced a soul crushing blow when he crashed away a supercross championship that he’d all but wrapped up. Today, he showed the racing community he’s still got plenty of fight in him by going 2-1 for the overall. In the first moto, which played out before the rain came, he rode behind Justin Cooper but was never able to execute any type of lasting pass. In the second moto, which was sloppy and muddy, he took the lead right away and checked out with the win.

“Justin [Cooper] was riding really well in the that first moto. We both got a good start and I felt like we were riding smart and kind of pacing ourselves a little bit,” Cianciarulo said in the post-race press conference. “He rode great but I kind of pumped up a little bit, which is weird because I don’t ever pump up much. In the second moto it was all about the start. I was able to get around Colt [Nichols] and had the same focus. I lost my goggles with like four laps to go, and I don’t think I’ve ever raced without goggles before. It feels good to get the first one out of the way with a good result. I haven’t been that good outdoors, really. Here and there I’d have a good moto, but overall I haven’t really been that good. It’s nice to be on the right track. Obviously it’s the first round and everyone’s nervous, but it’s a nice indication.”

Cianciarulo, who is good friends with Roczen, also commented on how cool it was for him to be able to put together a win on the same day as Roczen.

“We seem to have good and bad days at the same time. If I win, he’s not doing good and vice versa. So for us to both put it together on one day, it’s super cool. He’s been there with me from the start of my pro career. I saw him back in 2015, 2016, where he couldn’t even go any faster on a dirt bike. Then to see the stuff he’s gone through since, I’ve been with him through that too. I think we’ve got a mutual respect for what we’ve both gone through.”

Rounding out the podium in the 450 Class were Eli Tomac, who checked out in the second moto after battling with Roczen, and Jason Anderson, who was racing for the first time since suffering major injuries in January. Tomac looked like he was on the move in the first moto after coming from roughly a tenth-place start, but after making a move on Anderson for third, Tomac seemed to lose his flow and allowed Anderson to regain the spot. He also gave up another spot to Zach Osborne, but was able to pick it back up when Osborne crashed as the first moto was coming to a close.

“The first moto was disappointing,” Tomac admitted later. “I made a good charge up to the halfway point there then kind of got shuffled back. I made a few changes, but obviously the track conditions were different in the second moto. It took a little while to get going, but overall it was a fun ride in that second moto.”

Anderson rode great to end up third, but afterward said the second moto didn’t come easy for him.

“The first moto was pretty good. I was up front but I was just getting my race legs under me,” Anderson said. “I was able to make a charge at the end, which was really good. The second moto, man, I was so sketchy out there and almost crashing. But all in all it was a good day, and I’m just pumped to be back at the races.”

Anderson has never won an overall in Lucas Oil Pro Motocross, but considering how well he rode today after being away from the races for so long, it wouldn’t be surprising if he broke that streak soon. After the race Anderson talked about what it was like being back on the gate.

“Obviously I got hurt, and the biggest thing I’ve been waiting on is my arm. I broke my arm and I ended up having to get another surgery like a month-and-a-half after. So it took me a good two-and-a-half months to even start riding. That was the longest thing, and after that long off you get blisters, you’re sore, it’s insane. For about two-and-a-half months I was chillin’, and then I ended up being able to get some time in on the bike. I felt pretty good today, but at the same time I think we can make improvements.”

In fourth was Zach Osborne, who was competing in his first 450 National. He did excellent too, earning his spot with 5-3 moto scores. Had he not crashed at the end of the first 450 moto and lost a spot to Tomac, he would have ended up third overall.

In 250 action we’ve already talked about how great Cianciarulo was, but Cooper was excellent as well. He withstood immense pressure from Cianciarulo in the first moto before eventually opening up a gap and winning by a comfortable margin, and in the second moto he worked his way up to fourth after a mediocre start left him in ninth place after one lap. His efforts earned him second overall. Afterward Cooper talked about how much more difficult the second moto was.

“The second moto was much worse. If you tried to charge and lost your balance you were going for a ride you didn’t really want to go for,” Cooper said. “In the mud you can lose a lot of points in a hurry, so I’m happy to get out of here with some good points and I’m looking forward to moving on to next weekend.”

Rounding out the podium in third was Colt Nichols with 5-3 moto scores.

“I don’t think a lot of people in fantasy picked me for third, but I felt great, especially in the second moto,” Nichols said. “Practice and the first moto were a little awkward for me. In that first race I had some first-race jitters, but it feels good to be in the thick of the championship. We’re on the podium where we want to be. It feels good to be up here with these guys.”

Nichols also commented on how tricky the track got in the second moto due to the steady rain that had been falling.

“You really had to tiptoe in the second moto,” Nichols said. “On the site lap it wasn’t that bad, you could still go out and kind of do it, you just had to be a little more cautious. But fifteen minutes in it just got really bad and I felt like I was tiptoeing everywhere. The rain made it really slick.”

Nichols’ thoughs were echoed by Cianciarulo.

“I think it was one of those tracks where, the harder you tried, the worse you did,” Cianciarulo said. “When you have those ruts coming down those long hills, the bumps in the ruts make it so hard to keep your back wheel planted in the rut. It wants to skip out and go side to side. When I was behind Justin I saw him do the same thing a couple times. I think everyone was struggling with that. It’s hard coming down those hills trying to keep off the brakes and stay on the balls of your feet, which is really your best option. Ken [Roczen] had a really good first moto, and he’s really good at that. It was a tough track and I think it made us all feel a bit like beginners out there.”