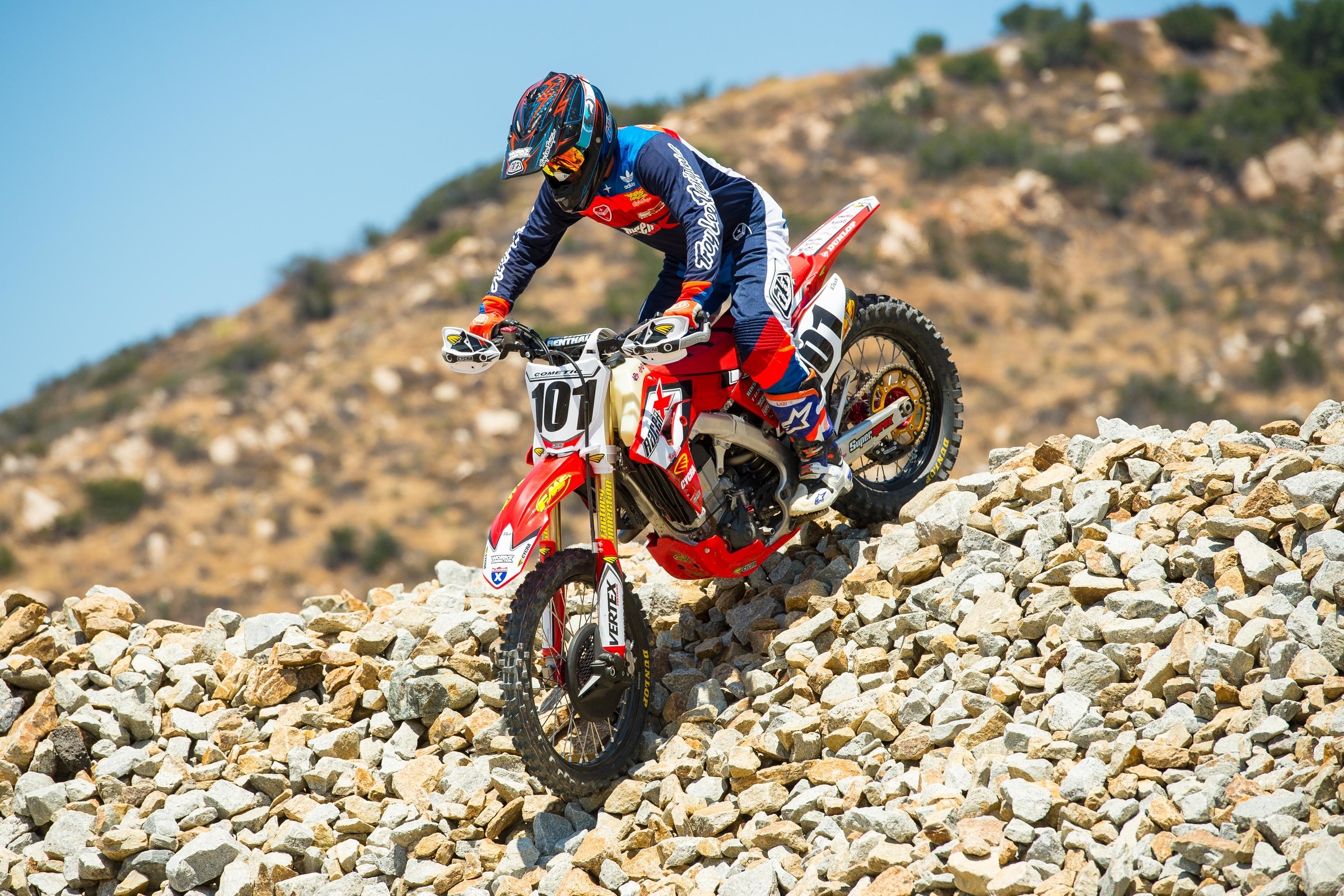 I caught a glimpse of Barcia’s Hangtown ride yesterday. Having been a factory rider, do you think the case of Busch beer is being used for counter balancing or for after race hydration? Whichever it is, I believe that this is next level stuff.

Sincerely,
Poon in the Whoops

Yamaha has always been on the leading edge of new development. The modern four-stroke era, backwards engines, and now the moto/trike/cooler combo. I think Barcia is going to struggle to jump LaRocco’s Leap on that thing, but he’ll be tough to pass if he gets a start. The hydration possibilities are endless, as are the mobile after-party scenarios (not that I condone drinking and riding). The weight in the cooler, particularly if its loaded with an 18-rack of Busch, will allow Justin to really get aggressive and lean over the front of the trike; that’s when he’s at his best, so I expect an easy win at Hangtown from Barcia. Also, two rear wheels means twice the traction in the mud, using the most modern mathematic calculations. Did we just get a peek at the 2020 Yamaha line? I think we did.

Good job on The Whiskey Throttle Show! It keeps me trucking.

My buddies and I took a road trip to see the Nashville Supercross (that town sucked us in one end and spit us out the other with ringing ears, empty wallets, and memories we can’t even remember).

Anyhoo, I got to meet Tim Ferry & Jeremy McGrath. Both awesome guys!! I almost had to walk away from Red Dog, he was talking so much. I couldn’t believe how friendly he was even with my six-beers-deep Canadian slang.

Now to the question...

How can guys like that be so normal and so many other riders just be d****??

North of the border moto

The pro motocross scene is very similar to a small town in Canada; there are a handful of clicks. Instead of hicks, natives, degens, hockey boys, and churchgoers the racing scene has factory guys, no-rides, hangers-on, industry grunts, and retired old boys. Factory guys are a mixed bag: most of them are cool but it depends on when you catch them and who you are. The no-rides are just excited somebody knows who they are so they’ll be super cool to hang out with. The hangers-on can be found following around the factory guys like they’re tied to them with a string. These guys want to seem like they’re an important part of the racing world so they’ll do anything for their preferred factory guy of choice. The industry grunts are cool but they’re too damn busy to talk to you. These are the guys who loved dirt bikes so much they sold their soul for a job in the industry. Now they never get to ride because they are constantly traveling or at the office. These guys burn out quickly and never want to see a dirt bike again. The old, retired boys have been around long enough that they have a good perspective on things. They aren’t relevant in current racing so they appreciate when somebody is still a fan. They’ve seen how the sport works and they don’t get sucked into the merry-go-round too often. These guys are great to talk with because they have stories for days and they’re at an age where they enjoy recounting them. You bumped into a couple legendary retired, old boys and it sounds like they were feeling chatty.

I don’t think there are too many “d****” in the sport, just young kids who don’t know better or really introverted or socially awkward kids who don’t know how to act around other people. Give these guys a few years, they’ll be retired old boys after a bit and more likely to talk. Glad you had a good time Stateside, slay some puck bunnies for us back home, bud.

I am a longtime fan of motocross/supercross, and this column is one of my favorites... love your sharp wit and suffer-no-fools attitude. Keep up the good work.

Ever since I first attended my first race in the early 1970s (at the legendary Widowmaker track in Salt Lake) I've been hooked. From aspiring racer, to actual racer, to over 20 years of riding and racing and on into my 50s, where I am now just a worn-out old fan and observer. My riding activities nowadays are mostly doing bicycle rides both off and on road, but I also do an occasional adventure ride with my buddies out in the desert.

After all these years of abuse, my knees and back are pretty worn out. I've noticed that the more frequently I ride my motorcycle, the old injuries rise up and steer me back to the pedal bikes. I've always thought it would be great to have some kind of realistic motocross simulator that would provide the fun and exercise of riding motocross, without the knee-tweaking realities of actual riding. My idea would be an actual dirt bike that reacts to inputs and simulated terrain, mated to 3D screens, and featuring programmable tracks. How great would it be to race around Unadilla or Namur from the safety of your game room?

What are your thoughts on this? I think with current virtual reality technologies being very advanced, someone would have built one of these. The potential for training in an injury free environment could benefit everyone from beginners to pros.

Thanks in advance,
An old moto head

I was going to poop all over this like a puppy on an expensive rug, but I reigned it in. I can get behind electric bikes or hydrogen-powered bikes or whatever the hell comes down the pike because it means I still get to take off on my bike and ride. But what you’re proposing involves me walking into my non-existent game room in my underwear, climbing on a prop motorcycle with a piece of headgear on and pretending to ride. Full disclosure: I’m not a gamer. I’ll play video games with my kids once in a while but after an hour I’m itching to get up and go do something—that’s just me.

They had a VR setup at the supercross races last year and it was terrible. The controls didn’t do what they should, there is no response from the bike when you twist the throttle, and there is no sound/smell/vibration/acceleration/etc. I’d have more fun sniffing glue and going rollerblading.

Maybe there is better tech out there that could more closely simulate the experience, but I’ve never seen it. For my money, I’ll take my Specialized Kenevo and bomb some trails because it’s the closest thing you can get to moto-ing while actually improving knee function, as opposed to deteriorating it.

I’ve not been impressed with any virtual reality simulator I’ve ever seen. However, the minute they create something that allows you to sit on your sofa and hook up with your favorite Victoria’s Secret model, we are going to have a serious problem. You think boys like sitting around playing Call of Duty now? That setup will make heroin look like a cup of decaf coffee. Here’s to bad knees and, hopefully, slowly developing VR games.