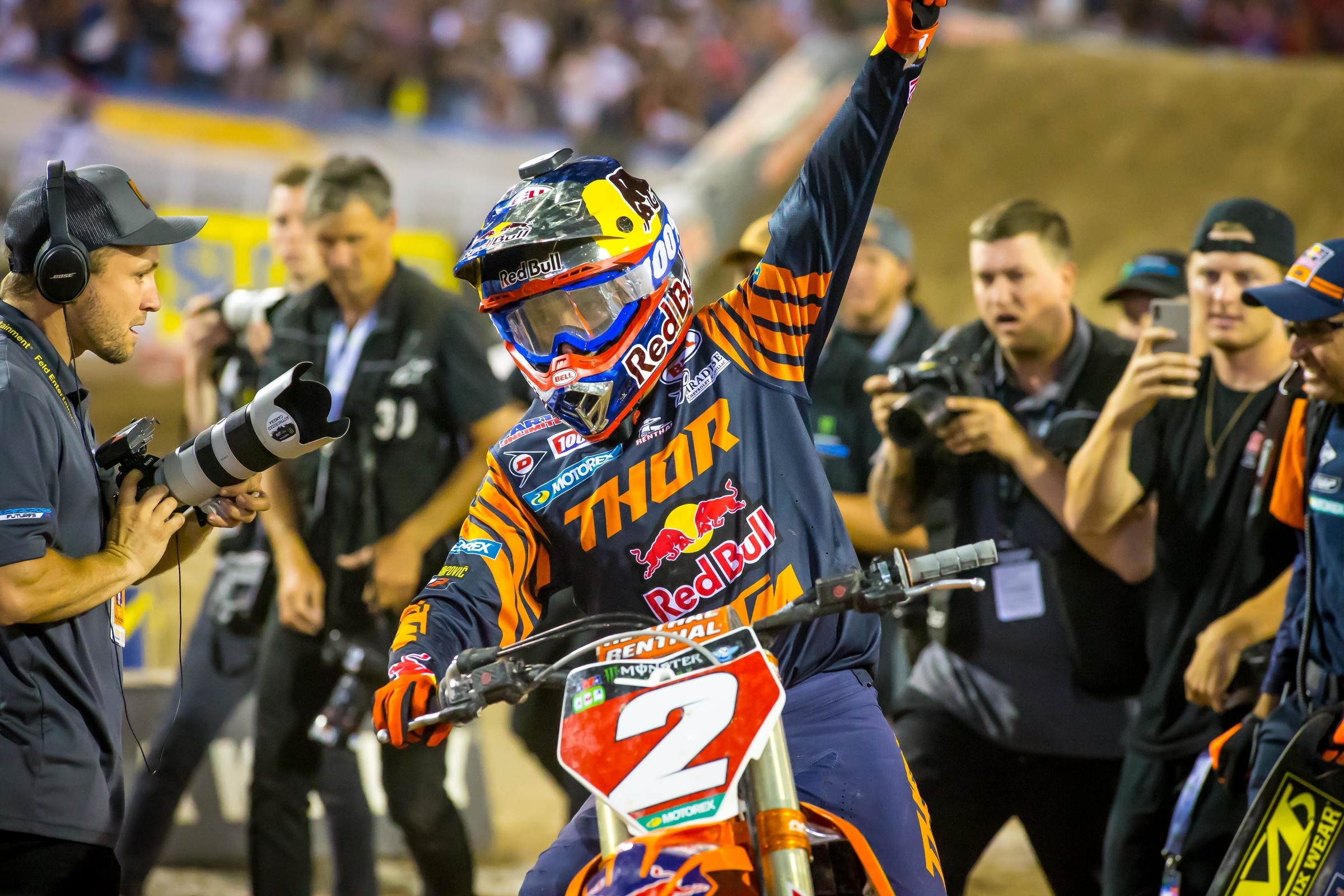 For a while, it seemed easy. The fastest dude indoors would take it outdoors and keep rolling. Two titles in one year was the rule not the exception, from Bob Hannah’s double-doubles in the late ‘70s, to stars like Donnie Hansen, David Bailey, Jeff Ward, Rick Johnson, Jeff Stanton, and Jean-Michel Bayle continuing the tradition. More often than not, the AMA Supercross Champion also won the AMA Motocross Championship. Jeremy McGrath’s reign over supercross skewed it a bit (although even he scored a double title season in 1995), but later Jeff Emig and Ricky Carmichael grabbed doubles of their own (RC did it in 2001, 2002, 2005, and 2006).

Since then, it’s gotten dicey. We hear a lot about a long grueling season of travel and training, even though the schedule looks almost exactly the same now as it did back then (Carmichael had 28 races on the calendar in 2001, one less than 2019). It doesn’t seem like that much has changed, but the results show that nailing both titles in one year has become about a 50/50 proposition. Or, to put it exactly over the last 10 years, a 40 percent chance.

This year Cooper Webb will try to deliver. Eli Tomac coulda shoulda woulda been a double champ the last two years but let supercross slip away in 2017 and 2018 while locking down two AMA 450 Class National Championships. Webb now holds the supercross title, but the numbers, and the narrative say that winning the stadium crown could be as much a curse as a blessing. Can Webb ramp it back up, emotionally and motivationally, to get a second title this season? The new champion of Monster Energy AMA Supercross was recently a guest on NBC Sports’ NASCAR America: Motorsports Hourand was asked if the supercross title had sunk in.

“A little bit,” said Webb about the title sinking in. “As a team, Saturday night after the race we all hung out around the semi and tried to let it all sink in. We were in Vegas so we enjoyed it a little bit that night. It’s been cool. KTM had a celebration for us at their office on Monday, and a few of my personal sponsors had us come to the office and threw us some championship celebration lunches and things like that. It’s the tough thing in our sport, you’re on the go for so many weeks in a row. You win the supercross championship and you have a brand new championship that starts in two weeks. But I feel like I enjoyed it a lot and I’m still enjoying it.”

With such a huge championship—and an unexpected one—already clinched, how will in impact his summer?

“It’s really a motivator, actually, knowing that I achieved a life-long dream,” said Webb. “You want to soak it in, but you really want to keep it going. So for me, it’s been a huge motivator and also, a bit of a weight lifted off now that the championship has ended. The biggest thing is, now that I’ve done it, man, the sky is the limit now.”

NBC Sports’ show host Krista Voda asked Webb about his surge in confidence. Did that come from within, or was it powered by his early-season victories in supercross?

“For me, I feel like I’m a pretty confident person, but in racing, as you guys know, as soon as you win that first race or get on the podium, just that belief instantly is there again,” he explained. “For me, that was the biggest thing. I knew I had the opportunity and the ability to win this year, but I think as soon as I did it, it was a whole new mindset as soon as I achieved it. You become addicted to that feeling of winning. So I think that was what really shaped my season, getting that first win, and really just running up front with the top contenders, which ultimately led to that win.”

Of course, that first win, at round three at Anaheim, has grown quite infamous. Webb pulled a last-lap pass on Honda HRC’s Ken Roczen to steal the victory, and then gave Kenny, an old rival, a finger gun salute over the finish. NBC Sports’ AJ Allmendinger asked Webb: “There was a moment early in the season that really stood out for me, and it was when you crossed the finish line and you looked back and you pointed at Ken Roczen. What were you doing there and was that message received?”

“Yeah, I mean, like I said, the last two years had been tough,” answered Webb. “There was a lot of talk and a lot of negativity being said by fans and riders and stuff. You know, that I would never be relevant again. So I think it was more of a, ‘Hey, I’m back. Don’t forget about me.’”

When Webb is winning races, confidence and bravado are never in short supply.  This season was a reminder of the same strengths we saw in his 250 days. But underneath that, Webb’s still a regular person, and even he can’t stare at a supercross championship trophy and be humbled by the experience. He might be a confident person, but he explained being surprised by his own career.

“I was an only child and my mom and dad sacrificed a lot to make my dream a reality, and just make it to the pro ranks,” said Webb to Voda. “I never imagined this as a kid—I lived a pretty normal life, going to regular school, playing other sports—I didn’t take racing seriously until maybe my teenaged years. Once I went pro, I was like, ‘Wow, I’m pro now, this is the highest achievement you can get.’ But I quickly learned in this sport, results really get you a nice ride on a good team and all that. So when I won in the 250s, I had never even saw myself as a kid even winning a 250 championship, so now, fast forward five years later, to win a 450 supercross championship is still, for me, it’s unbelievable. I never imagined doing that. Man, it just shows that when you want to put your mind to something you can get it done.”

Webb’s mind has led the charge this year. If he truly is addicted to the feeling of winning, he will be in good position to do the double this year.