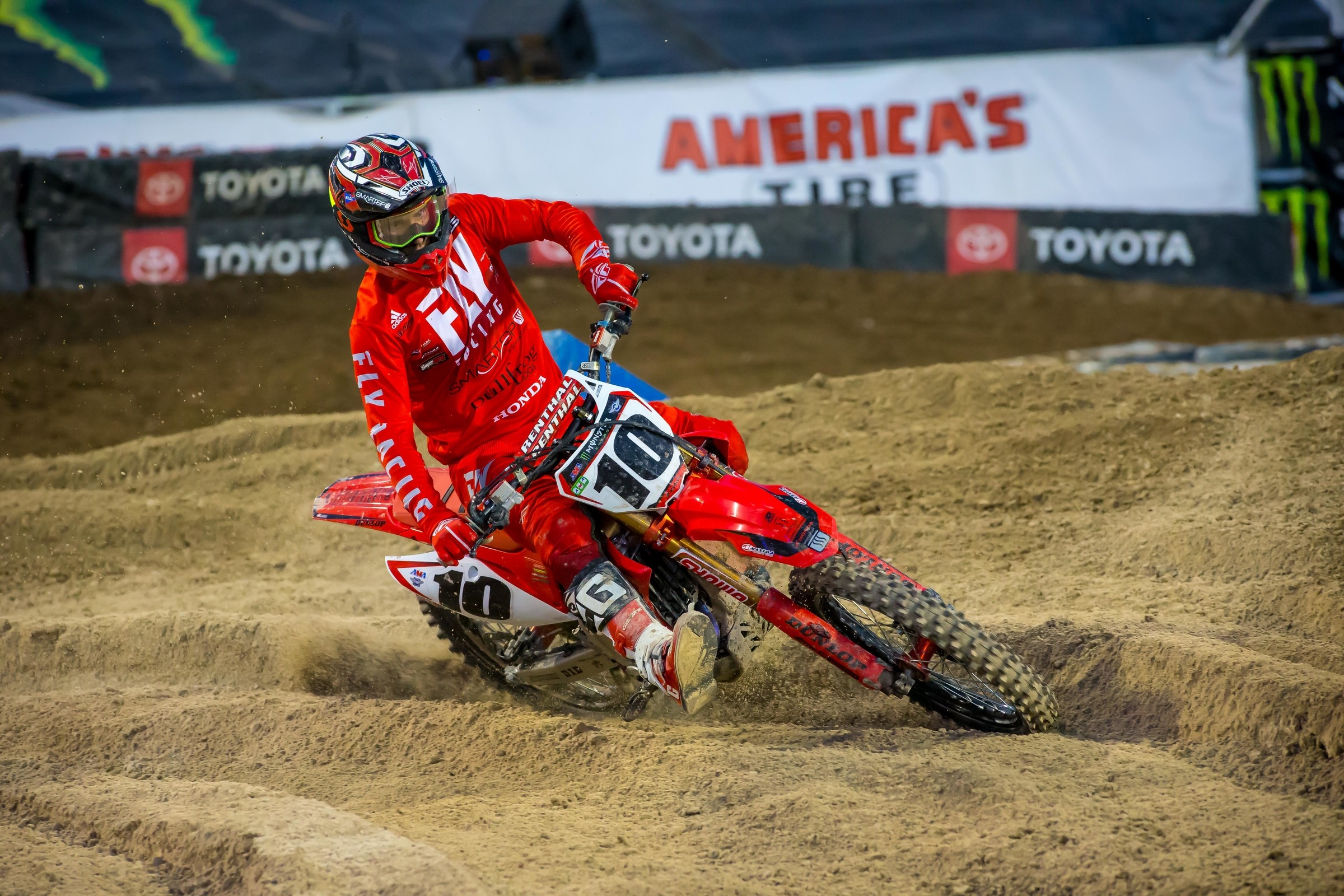 Justin Brayton had finishes of 3-2-2 to claim second-place in the Hawaiian Supercross last Saturday in Halawa, Hawaii. The SmarTop/Bullfrog Spas/MotoConcepts Honda rider suffered a torn MCL and strained ACL during a crash in Seattle but returned to Monster Energy AMA Supercross for the last two rounds in East Rutherford and Las Vegas, before finishing the season 10th overall in the 450SX. This week he traveled to Hawaii for the return of the Hawaiian Supercross and was able to spend some time on the beach with his family before lining up for the race on Saturday.

Our Steve Matthes caught up the veteran after the race.

Racer X: Be honest. Did you give that last one to [Ryan] Sipes?
Justin Brayton: No, I didn’t give it to him. I wanted to beat him.

I was surprised.
To be honest, with this track and how slick it was, my knee in the left-hand turns, I’m just kind of tip-toeing around. With it being that slick I just don’t want to dab it. In practice I dabbed it today and I’m like, “Oh, man. I don't want to do that again.” The second one, he beat me and I’m like, I can’t let that happen again. It’s Sipes, man! So then in the third one I was going for it and about halfway through after the finish, I tucked the front in a hole and I jammed my knee. I was like, oh, my goodness. No, I didn’t give it to him. I was still going for it. He was just so much better than everyone in the flat turns. That was it. He was so good in the flat turns.

This flat turn before the finish he was getting you every time and pulling up.
Yeah. A lot of that was for sure maybe I'm timid, and maybe some of it was because he’s so good in that. Some of it maybe was even 250, just so light and kind of nimble in the small track. It was so fun. To come here and have a week of pretty much vacation and now to do this. Eric Peronnard and the promoters, they crushed it once again. To race with Sipes, it felt like 2008 and 2009 all over again.

You made that comment about the vets. It’s a nice cap off for your year.
Yeah, for sure. The biggest thing now is for me to get healthy. I’ve been nursing this knee since Seattle, really. So I haven’t practiced too much for, call it eight weeks or so now. So just get healthy and take this summer off and start riding supercross in about August or so and get ready to head down to [Australia].

Veteran trick going further outside because the dirt was better.
Yeah. The very first one I’m like, “Man, the dirt is good out here.” I had the start going into turn one but some guys kind of cut the track on the dirt mounds. So I was like, all right, I’m going in the same place but I’m going to do the same thing and just cut the dirt mounds. So pretty much holeshotted two out of three, which is good, but Sipes just put on a clinic.

I hope we come back next year. It was a lot of fun.
It was awesome. The whole vibe and honestly the attendance was great. The Hawaiian fans were incredible. More people than I thought. It was really cool. I did an autograph signing last night and I thought it might have been one of them where you're kind of in and out and there’s 20 people, and I signed solid for an hour and a half. So the Hawaiian fans came out in packs. It was pretty cool.

How was my announcing?
I think it’s the beginning of a new era. I really do. If you need an agent, let me know. I’m sure your phone will be ringing off the hook tomorrow morning, so be ready.

I blew Weigandt out of the water, I felt. I thought it went well.
Me and Weege are pretty tight, so it’s debatable. But you and Weege as a team, I think that’s something to talk about.