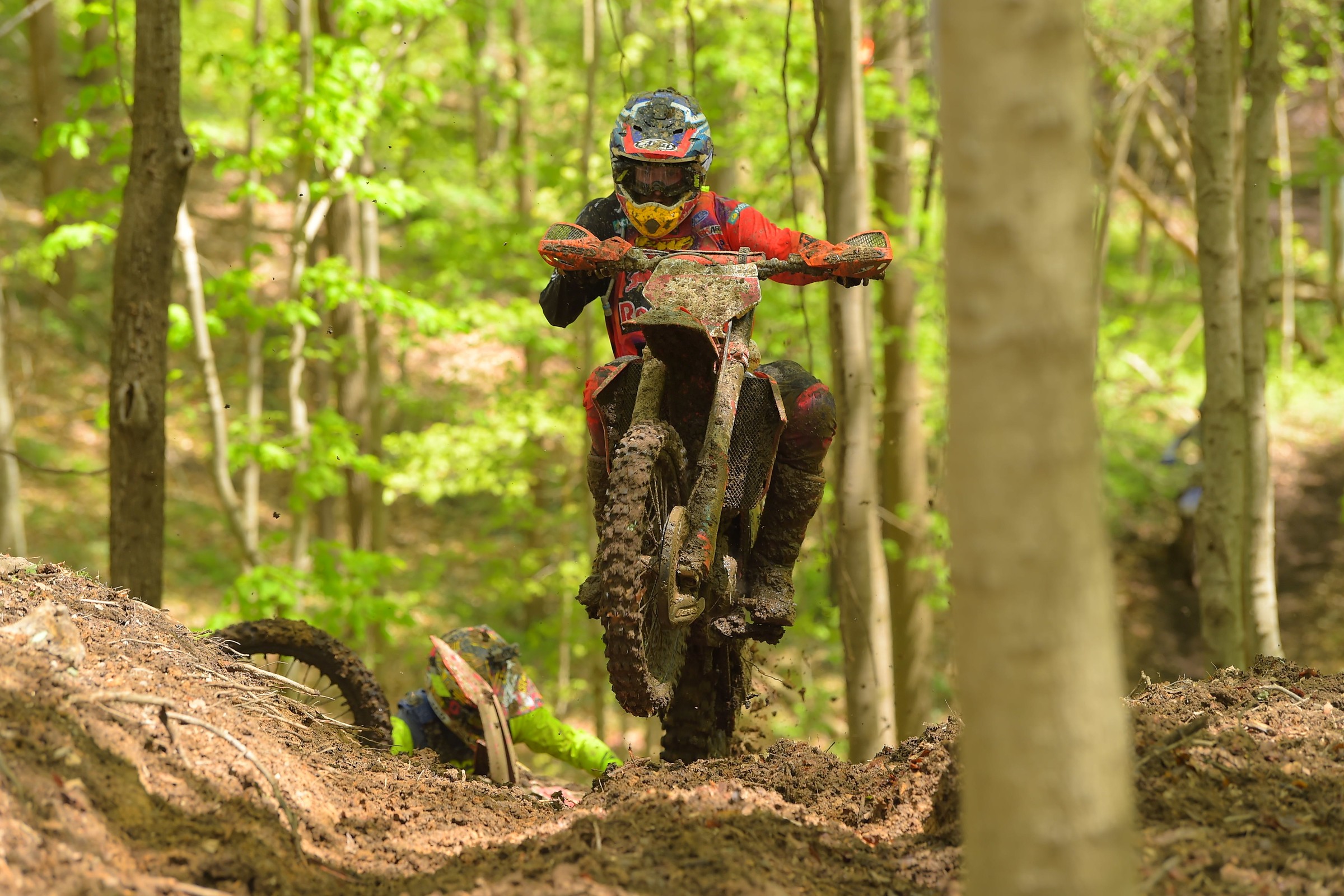 For the first time in the 2019 season, the Amsoil Grand National Cross Country Series, presented by Specialized, made the trek north for the Yamaha X-Factor Whitetails GNCC in Peru, Indiana. Rain leading up to the event led many to expect a mudder, but while there were some wet sections of course, the majority of the facility took those rains very well, which actually made for some great conditions. Here’s what we learned from round five.

Yes, it almost sounds like a broken record to discuss Kailub Russell’s race performances each week. He has been on fire season after season, but has also seen his fair share of stiff competition. It’s a rarity that he’s able to check out and pull away with a solid lead, as Thad Duvall seems to match his pace each and every event. However, Russell had the X-Factor course dialed and put in the type of performance that every racer strives for.

We mentioned the rains that fell leading up to the event. While it didn’t make for the full-blown mud race that some people expected, it did make the soil very soft, which led to a very rough and rutted course. Russell did his homework through the early stages of the weekend and walked the track more than once to scope out the changing conditions. With many alternate lines to choose from, and just about too many ruts to count, this paid off. Once he found his way into the lead he pulled away from the rest of the pack.

At the completion of each lap Russell would hold anywhere from a 45-second to more than one-minute lead over second place Duvall. Duvall would put on a charge on the final lap, while Russell would have his slowest lap of the day, and that allowed DuVall to get the gap down to seven seconds at the end, but Russell still did what he needed to do and came away with his third win of the 2019 season.

One of the things that makes GNCC Racing so popular is the diversity of the series' schedule. The previous event took place in the sands of South Carolina, while the X-Factor event saw totally different terrain with some gently rolling hills and black loamy dirt native to Peru. The X-Factor event takes place at a large deer ranch famous for raising monster bucks. Obviously these deer aren’t just walking around the same woods these guys race in, but the woods the course does offer lots of hills where many alternate lines open up.

The X-Factor GNCC is still in its infancy as this marked just the third event ever hosted there, which means even the long-time GNCC racers don’t have an advantage. Those who spend time walking the course and seeing where the fast lines develop will ultimately be able to process that information quicker when approaching those sections while racing.

This year’s event was a bit different than the previous editions. The inaugural event in 2017 was one of toughest mud events the series has ever seen, then last year’s event saw some very dry and dusty conditions. This year saw a mix of mud and great dirt mixed together. The design of the racecourse was a little different as well due in fact to those forecasted rains. There were a lot of areas where the trail zigzagged back and forth around ribboned areas, which actually kept the track out of some nasty mud but also contributed to those ruts we discussed earlier.

3. A Rookie Finds The Podium

The story of Josh Toth has been a pretty interesting one to watch unfold. The Connecticut native never contested the GNCC series full-time until 2016, and made his first full run at the series starting in the XC2 class. He began that season aboard a KTM backed by Trail Jesters Racing, but when a ride with the AmPro Yamaha team became available for the final rounds of the season, his buddy Ross Mauri, who runs Trail Jesters, told him to go for it. It proved to be a great move as he claimed his first-ever XC2 class win in his first GNCC event aboard the AmPro machine. He backed that up with the 2017 XC2 class championship, and landed a ride with the FMF Factory KTM team in 2018. A wrist injury at round three in 2018 would end up costing him a second XC2 title, but as he moved to the XC1 class for the 2019 season, many have wondered how steep the learning curve would be.

There’s no doubt that the step to the XC1 class is a tough one. More than once there have been riders who have landed overall podiums out of the XC2 class, and struggled in the early stages of their XC1 career. It’s rarity for anyone to make the move to the XC1 class and find immediate success, but Toth has done a fairly good job thus far. With two top-fives already, Toth came into the X-Factor event looking to rebound from a bad day at the previous round, and did exactly that. Landing his first-ever XC1 podium, Toth did it in a pretty convincing manner. He was able to hold the third place spot throughout the entire event and even stay a few minutes ahead of a hard-charging Steward Baylor, who can never be counted out when the going gets tough.

Overall, this was a very solid first-time podium for the rookie. Now that he knows he has what it takes to contend for a podium, it’s only a matter of time before he figured out how to latch onto the rear wheels of Russell and Duvall and make his bid for his first-ever XC1 win. When will that happen? It’s hard to say but there’s no doubt that there is a ton of potential from this young gun.

Once again the defending XC2 class champion, Ben Kelley, would charge from the opening stages of the race to pull away and claim the XC2 win. Kelley has been absolutely phenomenal this season and now has five consecutive wins. This now ties him with Kailub Russell, Steward and Grant Baylor, and Josh Toth for most consecutive XC2 wins. If he’s able to pull off a sixth win, he’ll officially hold the record for the most consecutive race wins in the XC2 class. Past that, it’s just about impossible to expect a perfect season as it’s been proven time and time again that anything can, and usually will, happen in the world of GNCC Racing!

While Kelley checked out early, there was a serious freight train of riders battling it out for the second-place position. At one point in the race, second through seventh were all within eight seconds of each other! Eventually, they would begin to spread out and positions would shift. Tegan Temple and Liam Draper would hold the second and third place spots early, but both would experience mechanical issues later in the race that dropped them out of podium contention. That would move Craig Delong and Austin Lee into podium contention around the halfway point of the race, and they would hold those spots until the end with Mike Witkowski and Ryder Lafferty rounding out the top five.

We’ve already discussed how Kailub Russell was able to pull away for the win, even with Thad Duvall making a last lap charge, but there’s another factor there that deserves its own discussion. Just how fast were those XC1 leaders going? At a typical GNCC event, the leaders will lap somewhere around the 30th-40th place overall. The majority of the time that rider will be a top five A-class rider, or an XC2 rider who got off-pace. It’s pretty rare to see them lap any higher than the 30th place position but those guys had that course so dialed in that they lapped all the way up to 15th place overall!

Witkowski finished a very impressive and respectable fourth place in the XC2 class, but Russell was able to lap him before the end of the race, which finished at exactly three hours and 58 seconds. Once again, Russell and Duvall were on fire and were able to accomplish something that probably won’t be matched anytime soon.

Of course, don’t take anything away from those who were lapped. There are some extremely talented racers who went a lap down. There’s no doubt that the rutted conditions the X-Factor course presented created one of those scenarios where you were either extremely good at railing the ruts, or you were just picking your way through and trying conserve as much energy as possible. It was a tough one, and it’s likely to be remembered by those competitors for quite some time.