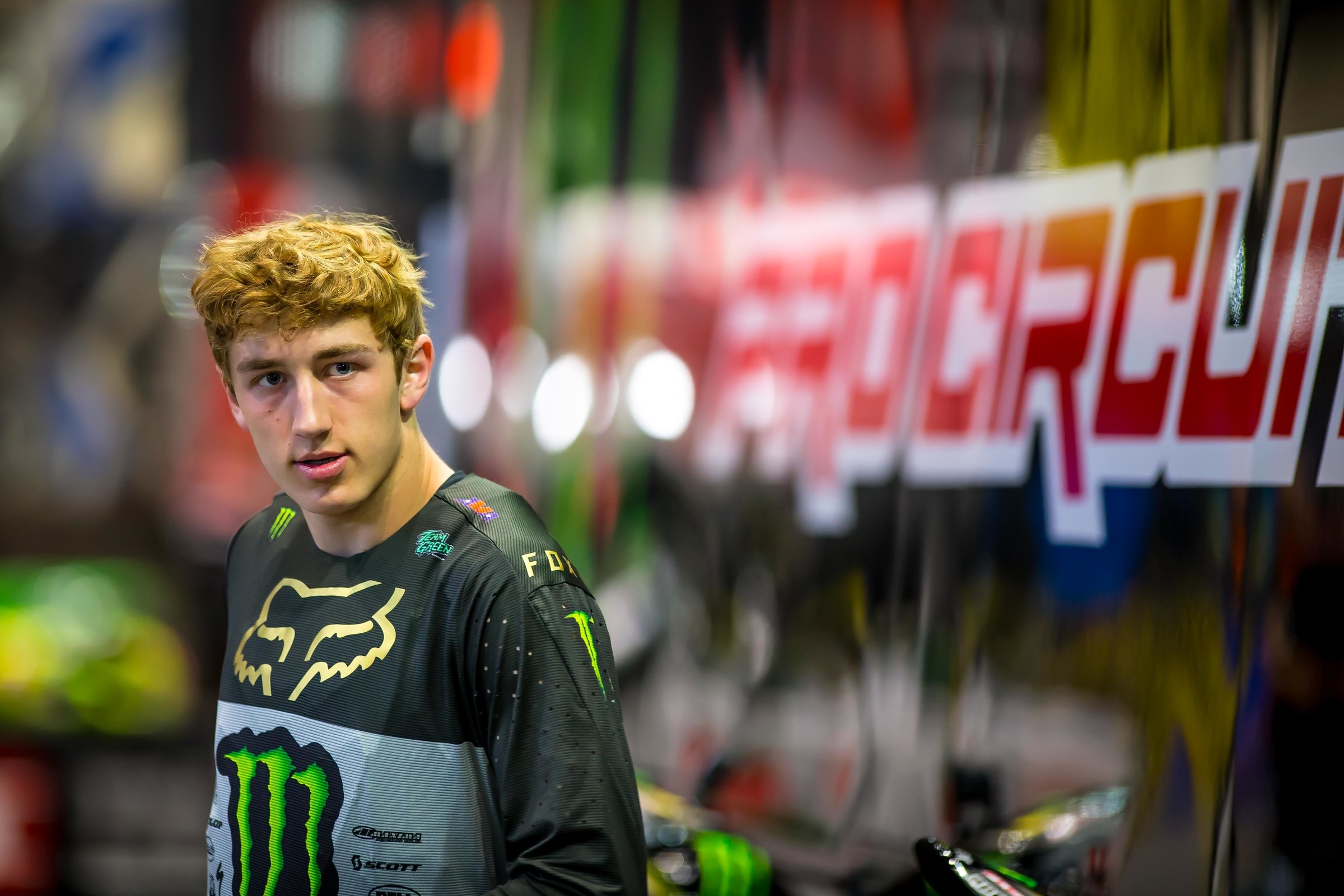 Earlier this year, 17-year-old Garrett Marchbanks lined up for his first Monster Energy AMA Supercross aboard his Monster Energy/Pro Circuit Kawasaki KX250 at Anaheim 1. With the hype surrounding the season-opener, the rookie finished in a solid sixth-place. Since then, Marchbanks has had four more top-ten finishes this season, including a podium in the San Diego mud—an area is his all too familiar with.

“Garrett, first full year in supercross, at San Diego in the mud, he loved that,” said team owner Mitch Payton. “I didn’t realize he liked mud so much and he was excited about it. He pulled his goggles off in the second turn and then rode the whole moto without goggles and never had a problem and just kept going, going and going. He rode a fantastic race and that was really cool and inspiring and confidence-building for him.”

The Coalville, Utah, native currently sits tenth in the 250SX West Region. He’s been solid some nights and has used others as learning experiences, as he has endured his own fair share of struggles. He has won two LCQs—his first in San Diego before getting on the box in the main and then in Denver—and DNF’ed the Denver main event after a wreck early on. With all of the highs and lows, the amount of experience the youngster is getting will help shape the rest of his career. As the Monster Energy AMA Supercross winds down and the Lucas Oil AMA Pro Motocross Championship sits just around the corner, things seem to fair well for the young #61.

We caught up to Marchbanks to talk about his season and more.

Racer X: Garrett, how were things at the gym? All part of the life of a professional racer, huh? How do you like doing the training and the testing and countless laps that come from now being a pro?
Garrett Marchbanks: Yeah, I love it. I love doing that stuff. I never get tired of it.

Your rookie year in Monster Energy AMA Supercross is nearly complete. What’s your take on your first year as a supercross racer?
My year so far? I think it has been pretty good. There could have been some better races on my end, but besides that, we’ve taken all the good from it and I’ve tried to make the most of it. I’ve just tried to keep learning. I’ve been happy with it so far.

Beginning with the Hangtown National last May, you ran in five 250 races of the 2018 Lucas Oil AMA Pro Motocross Championship. You placed in the top ten at Hangtown, Glen Helen, and Thunder Valley before a few injuries put you on the sidelines. Did those races inspire confidence in you and your racing?
Yeah, I went and did five rounds before I went out and got hurt at RedBud. It was awesome and I was pumped with most of my results.

How was it to line up in Angel Stadium at Anaheim 1 for your first 250SX race? Over the year quite a few racers have told me A1 can be pretty intimidating and overwhelming when you’re a rookie.
Yeah, it was definitely overwhelming for me. I was pretty nervous for the first race, but after I got sixth place in my heat race, that worked pretty well just for chasing the butterflies out. It was cool to be one of the first guys from Utah to make a main event. That was pretty cool. And it did live up to the hype that I had expected. The hype for it was bigger than I thought. I’ve participated in the Monster Energy Cup before and it was even bigger than that. It was all pretty cool.

You placed a real respectable ninth at round two over in Glendale. A good race for you?
Yes it was. That race was a pretty big eye opener for me just because of the starts. In the outdoors you can start around 15th and kind of move your way. I think I started around 16th or 17th place in [Glendale] and only worked my way up to the ninth. That was a really hard one for me. It was just a battle from ninth place to tenth place to 11th place. It was just a constant battle between three of us and I was able to kind of get away from those dudes.

You placed 21st and eighth at Anaheim 2 and Oakland, respectively, but then bounced back in the rain and mud of San Diego to finish a remarkable second overall to your teammate Adam Cianciarulo. Talk about the San Diego race.
Yeah, San Diego was a good one. I’ve always been a huge fan of the mud. That’s what I always trained in when I lived in Utah. When I saw the mud, I was just so pumped for it. I knew I could have a really good night.  At first I didn’t think I was going to hit the podium for how bad my start was in the main. I remember on the first lap and only two turns into the main, I ripped my goggles off because I just couldn’t see through my roll-offs. During the race I just never even looked at the pit board during the race so I was just kind of going with it. I remember looking up after I crossed the finish line and looked up and saw that I had finished second and that was really cool. I just didn’t expect that.

And I know Ivan Tedesco, who has been doing a lot of testing and R&D work for Mitch Payton and Pro Circuit, has also been in your corner and helping you out a lot this year.
Yeah, Ivan and I have been working together on and off the track. It’s been working really well. Ivan helps me out a lot.

How is it working with Mitch, your mechanic Colter Ahrens, and the rest of the Monster Energy/Pro Circuit Kawasaki team?
It’s definitely different than the amateur scene. You’re not really around the team that much, so it was all pretty new to me last year in the outdoors. It was all pretty new to me, but after the second round, I got used to it. And all the guys around me on the team are all really positive. We don’t train that much together, but with Adam [Cianciarulo], we ride out at the track together every other day. It’s been pretty good. My teammates are awesome and they’re really cool dudes.

How have things been with Mitch? That guy has been around for a while and seen a few things.
Yeah, Mitch and I, we’ve been pretty good so far. There is nothing bad to say. I’m just glad to have the opportunity to ride for him.

It’s one hell of race team with all of its history and success, isn’t it?
Oh yes it is, and I want to have my name up on his truck door one day.