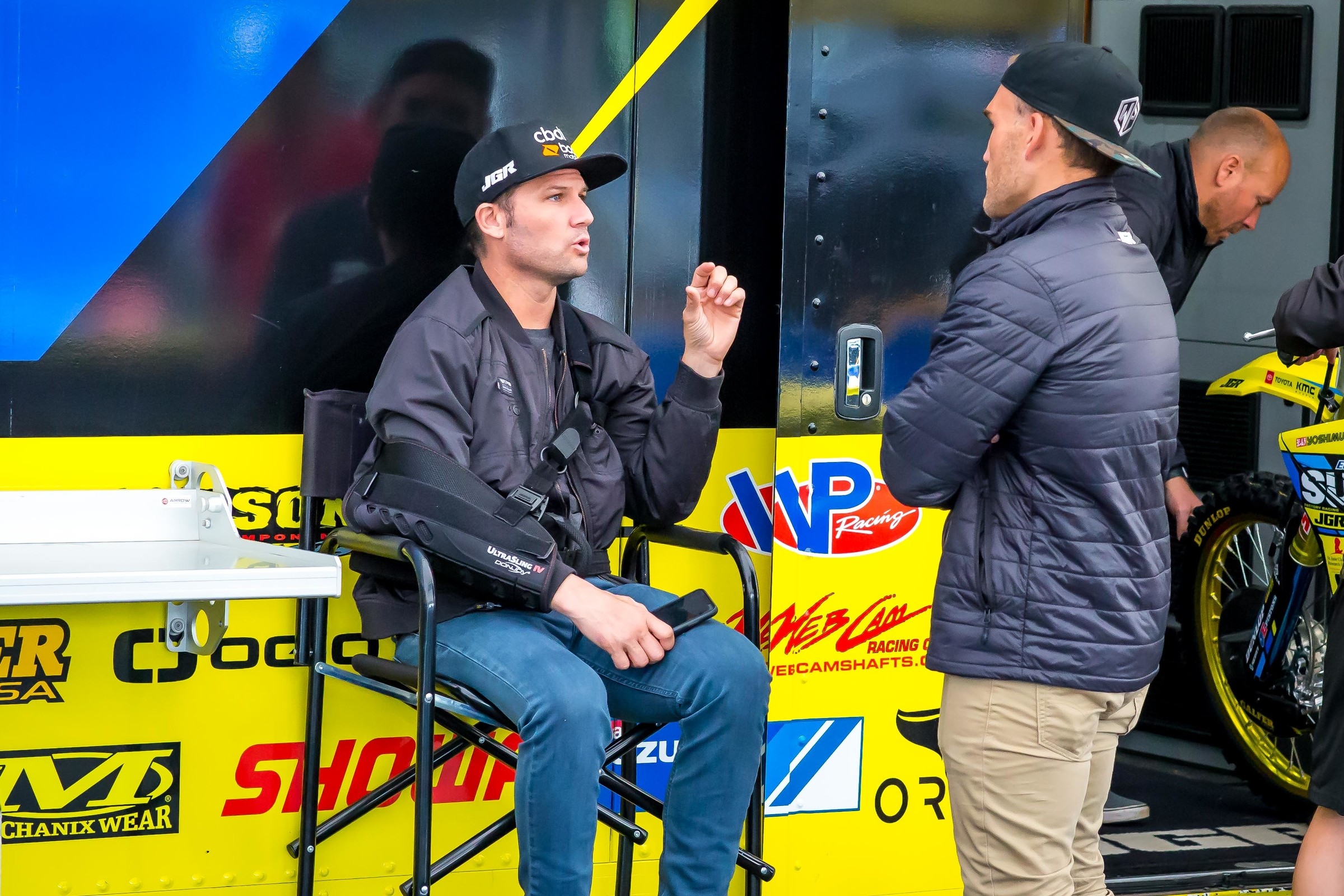 Comment: Jason Anderson is getting ready for the Lucas Oil AMA Pro Motocross Championship after breaking his arm and some ribs, lacerating his liver, sustaining a partially collapsed lung, and injuring his back while practicing for supercross.

Comment: Barcia, who’s been dealing with an injured shoulder, will miss this weekend but will be ready for the Lucas Oil AMA Pro Motocross Championship.

Comment: Bloss hopes to be back for the High Point National after tearing his ACL before the start of the supercross season.

Comment: Catanzaro broke two ribs, punctured a lung, separated a shoulder, and fractured his scapula and wrist in Houston. He’s in for Vegas.

Comment: Enticknap broke his sacrum and L5 vertebrae in Nashville. He’s had surgery and is out for Vegas.

Comment: Friese tore his ACL in Arlington. He’s out for Vegas.

Comment: Grant injured his leg and two ribs while practicing during the week. He’s out for Vegas, leaving Monster Energy Yamaha Factory Racing with no riders for the weekend.

Comment: Martinez will miss Vegas due to a broken femur suffered during qualifying in Indianapolis.

Comment: Although there is no return date set for Peick, he’s back riding and training after sustaining serious injuries at the Paris Supercross.

Comment: Plessinger broke his heel in Daytona and is out for the rest of supercross.

Comment: Reed had hoped to be back for Vegas after sustaining eight broken ribs, a broken scapula, and a collapsed lung in Seattle but he’s not ready to race again yet. He will again attend the race and will be a guest on the PulpMX/Racer X Live Show. If you’re a Reed fan don’t despair—on Instagram he teased the idea of racing a few nationals this summer.

Comment: Stewart had hoped to be able to race in Vegas after breaking his femur in Glendale but he’s not ready to race yet. He’ll miss the action this weekend.

Comment: Stewart will miss Vegas after suffering a concussion in Nashville.

Comment: Tedder will miss the final round of the supercross due to a nagging wrist injury that has taken longer to heal than anticipated.

Comment: Wilson crashed in Denver and sustained a shoulder injury and kidney contusion. He’s undergoing therapy and hopes to be back on the bike in two to three weeks.

Comment: Ames is out due to a compound fracture to his left radius and ulna.

Comment: Crown is out for the season after dislocating his ankle.

Comment: Fleming is out for the season with a broken femur, clavicle, tibia, and fibula suffered in Atlanta.

Comment: Forkner tore his ACL during practice in Nashville. He attempted to race in East Rutherford but wasn’t able to continue after over jumping a single and hurting his knee. He had surgery and miss the rest of 2019.

Comment: Hayes has been battling a hand injury for the last few races. The injury hasn’t improved and he’ll miss Vegas.

Comment: Martin’s recovery is going well and he’s been cleared to ride a stationary bike after suffering a burst fracture to his vertebrae last year at the Muddy Creek National. He’s expected to be ready to go in 2020.

Comment: McElrath, who has been out since Seattle with nerve pain in his back, should be ready to go for the Lucas Oil AMA Pro Motocross Championship.

Comment: Owen has been dealing with a back injury and returned for East Rutherford, but struggled in the main. He is out for Vegas. "Super bummed to say that I won’t be lining up in Vegas," he wrote on Instagram. "We showed some good speed last weekend but my back injury is still hanging around. I have a slipped disc that is pinching a nerve and I get a lot of shooting pains. As the day goes on it gets worse and worse which gets the the point I can’t finish the races. I feel it’s best to get back to 100% and work towards the bigger picture which is being able to race my dirt bike like I want to and know that I can."

Comment: Schehr crashed in Seattle, was landed on, and sustained a lacerated liver and kidney, collapsed lungs, a damaged artery, five fractures in his spine, eight broken ribs, and a broken arm. He’s out for the season.

Comment: Shaw crashed while practicing motocross and broke his femur. He’s out for the season.

Comment: Smith injured his wrist early in the season and will miss the final round of Monster Energy AMA Supercross.

Comment: Weltin will miss the rest of the season following a crash in Daytona that left him with a fractured clavicle and scapula, and partially torn labrum.