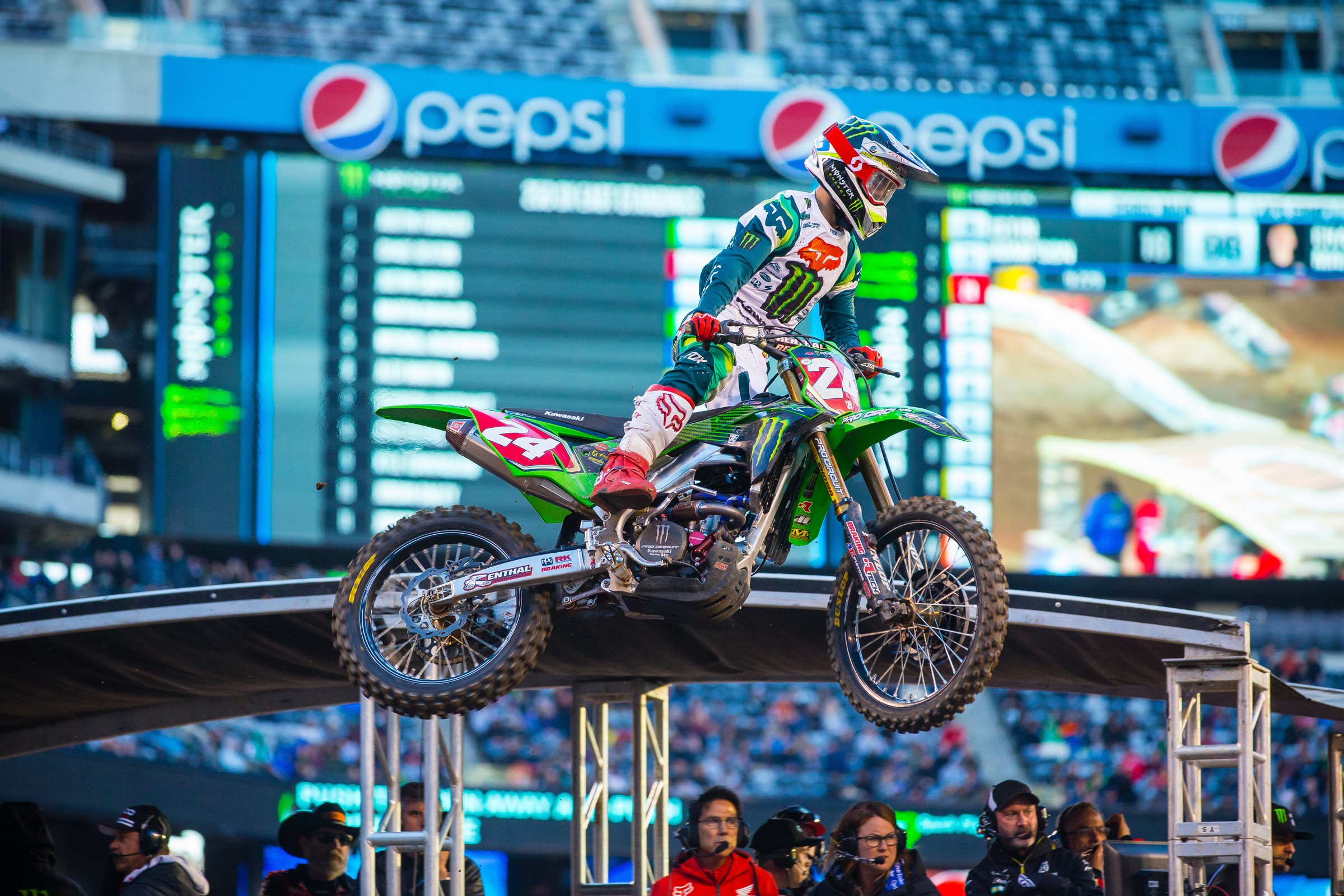 It says a lot about a racer’s mentality to see Austin Forkner, in a situation where normal people would be guided only by self-preservation, instead resorting to racing instincts honed through a lifetime of winning. Earlier in the day, Austin commented that a knee injury provides constant reminders, because you feel it in so many things throughout the day. Forkner had those reminders in New Jersey, as he wasn’t at his usual pace in practice or his heat race. When it came time for the main event, though, he willed himself to go back to who he is. He went for the win.

He had to. Holding only a three-point lead in the 250SX East Region of Monster Energy AMA Supercross, Forkner had to deal with more than just a torn ACL. He needed to win or at least finish in front of GEICO Honda’s Chase Sexton and Monster Energy/Yamalube/Star Racing Yamaha’s Justin Cooper. Thus, he was thrust into go-for-it mode.

That’s okay, because that’s the mode Forkner has been living in all season.

It’s heartbreaking for Forkner to drop from a dominant campaign (taking the first five standalone 250SX East wins) to not even winning this year’s title, but the Nashville Supercross practice crash wasn’t an isolated incident of bad luck. Forkner lived on the edge all year, pushing to max speed in practice, logging quick times but also huge crashes. It was just the Nashville one that caught up to him. Regardless, this was his strategy all year, and at least he can say he went down swinging. Because it New Jersey, torn ACL and all, he aimed for the fences again.

It takes a special kind of mental fortitude to be so hurt that you could only ride once in three weeks, show up with your knee hanging on with tape and a brace, to struggle in practice and qualifying, and then man up and battle for the holeshot—and win—in the main event. It really gives you some insight on how the mind of these racers really works—adrenaline and instinct overpowering all doubt. Forkner bumped title-rival Sexton in turn one, then ran it in hard on him again in turn two. Forkner was hurt and vulnerable, you’d think he’d want to avoid contact at all costs, but yet he was the one getting physical on the track. After a few laps with the adrenaline flowing, it appeared the miraculous could happen. Could Forkner actually win the race?

That was going for too much. Forkner, closing on his teammate and race leader Martin Davalos, jumped too far over the big single, landed hard into the face of the next jump, and that was more than the knee could take. It was over right then.

“We worked really hard to make it to this point and it’s disappointing to see all that hard work not end up becoming a championship,” said Forkner in a team statement. “It’s probably hardest because we were so close.”

It seems crazy for Forkner to be take huge chances while riding through pain, but what other choice did he have? The odds were long that this would work even if he just tried to stay safe and cruised for top ten finishes while hurt. So he played the other hand—all in.

“The whole team has been amazing with their support and now I’m ready to start the recovery process and get back out there at 100 percent,” he said.

This will likely mark the end of Forkner’s season; expect him to undergo knee surgery and be out for the Lucas Oil AMA Pro Motocross Championship.

The New Jersey plan was just the opposite for Sexton, who had the health and time to wait this all out. When Forkner hit him, he just let it go.

“Honestly, Austin was trying to take me out,” Sexton said on NBC Sports Network. “You can’t really race like that, I understand we’re racing for a championship but trying to saw off a guy’s front wheel is not cool.”

“I can’t knock him,” said Sexton. “He was going for it, he was riding so much better than he did in his heat race. I felt like I had a target on my back, which was kind of odd because he’s the one that was leading the points. I wasn’t going to do him dirty like that and go after his leg, that’s now how I race. After those couple of incidents, I was just like ‘I better let this race come to me’ because I felt like I had to speed to go get those guys.”

Considering he was aiming for his first win, it was an impressive level of cool. He’ll need to do that one more time at this weekend’s Las Vegas East/West Showdown finale, now holding a nine-point lead over Cooper, who didn’t have his best stuff on Saturday night and lost more ground in the championship. Sexton had an incident with Cooper at the last race in Nashville, he played that one cool, too.

“I don’t feel like I have that much pressure on me, yeah I have the red plate now, but this is only my second full year,” said Sexton.” It’s come at me so fast, it’s not like I’m super worried about it. Obviously, I want to take advantage of this opportunity and win this thing, but I feel like it has all happened so fast.”

It’s happened so quickly that Sexton really couldn’t even celebrate his first career win. He needs to stay in focus on next weekend’s finale.

“To be honest, as soon as I came off the track, I was like, ‘Okay let’s get back to work for next weekend,’” he said. “I’ve been doing a good job of taking each race race-by-race, going back during the week and staying relaxed. But right now I’m feeling pretty good.”