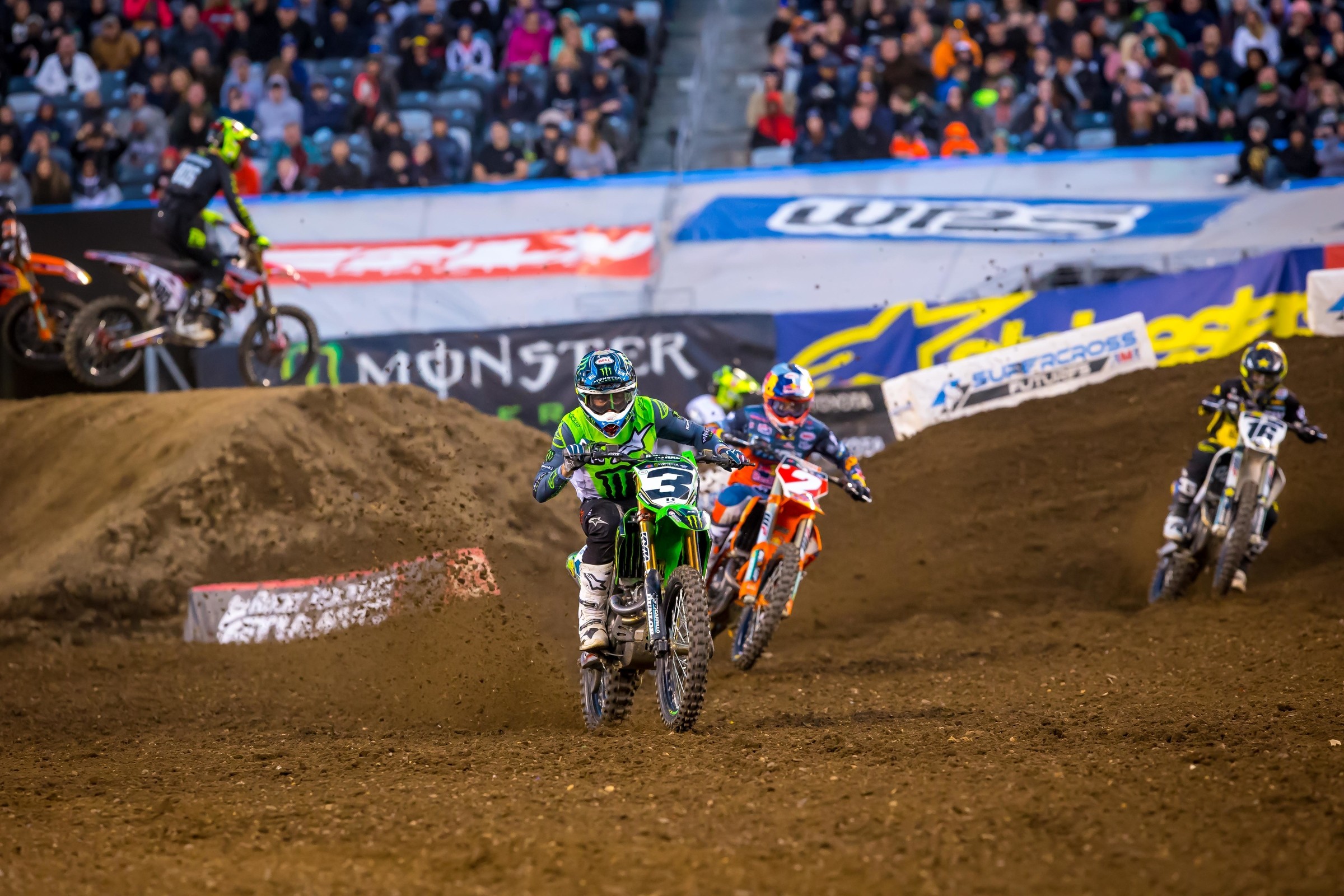 It was symbolically the Cooper Webbingest of Cooper Webb races for 2019, one singular round to sum up his strategy and success for 2019 in Monster Energy Supercross. Webb again made the most of a bad night by somehow surviving through a series of crashes for his rivals—and an illness for himself—to win his seventh race of the season and put his first-ever 450SX Championship just inches away from his grasp.

After the race, Webb revealed he had been struggling with an illness for a few days and had even spent the morning of the race throwing up. He downplayed that during the post-race press conference, but that was easy after winning the race. He felt bad during the day and had to manage the situation after sub-par practices and a tough heat race, but as he has done all year, he came up clutch in the main event, grabbing a key (and customary) holeshot and putting himself in position for good things.

Didn’t take long for challenges to come, first from a rejuvenated Zach Osborne, and second from Eli Tomac, who had won the last two races in the championship. Osborne and Webb battled for the lead early, then Tomac slipped into second and went after Webb. Tomac took the lead and appeared ready to take off, but Webb stuck with him and started attacking to get the lead back. Was this Webb truly being aggressive, or was Tomac, second in points and desperate for a Webb mistake, using his 2017 technique of slowing the pace and hoping others could get in the mix? Webb even repassed Tomac at one point, but Tomac answered back, and then Webb bobbled and Tomac pulled away. Eli was in position for his third-straight win until he threw it away in the whoops. This left Osborne and a close-chasing Blake Baggett to challenge Webb, and they did, with Osborne pressing his riding and training partner for the lead, and then finding an opening via two good lines in the whoops. Osborne, who says he has stumbled on some better bike settings after three hard days of testing for Lucas Oil Pro Motocross, found himself in position to win the race, until he clipped the landing of a rhythm section and went shooting up a berm. This put Webb back in the lead, while a fast-closing Tomac went around Baggett for second—and then Baggett fell. Now it was down to Tomac and Webb again, and for the second time, Tomac threw it away in the whoops!

“I just had to chuckle about it,” said Tomac, of Monster Energy Kawasaki. “I did the exact same thing twice. We were going triple into the whoops there, I went too far to the right, and I went into the same whoop and same tuff block twice. I might have been able to deal with one of those, not two.”

With Tomacs two crashes, Osborne’s big bobble, Baggett’s crash, an early crash for Marvin Musquin (lightning quick in practice) and a bad start for Ken Roczen, there were zero challengers left for Webb.

“It was tough, I was just getting handed it left and right, guys were making mistakes,” said Webb. “It was fun to battle with Eli a little bit, I got tight and he found a flow, then he went down. Battled with Zach a little bit. They gave me some nice gifts and I can’t believe it. I felt like crap all night and all week. The goal was to get top five, to get a win is incredible. It’s crazy how life works. This morning I was puking in the bathroom not knowing how I would do tonight.

“It was tough, the track was difficult, you kind of want to charge forward but you also have to ride in your comfort zone. Eli got around me, made a mistake, Zach got around me, made a mistakes. I felt like they were faster and they were catching me, but I didn’t quite know where. But yeah, it feels good to get another win, it was crazy out there.”

Osborne was much, much, much better than previous races this year, making this easily the best race of his 450 career.

“It’s been a huge long grueling road to get back to where I’ve been,” said Osborne, talking about a collarbone injury that cost him the early part of the season. “Now it’s taken 16 weeks. I had a really good off season, great bike, probably the best I’ve ever felt. We made some changes with the bike, and I felt good and controlled in the whoops. The last few races when I got a good start, I got eaten alive. I told myself, if I get another start like that I have to just send it.”

In the 250s, Chase Sexton played with the calm and cool of a veteran to outlast his rivals, showing impressive maturity considering this was his first-ever pro race win.

“We made a lot of bike changes from the beginning of the season. It’s pretty crazy what my bike was like at the beginning of the year until now. That main event, I didn’t really feel like I was riding that great, but I think it was because the track was so beat, it was just a slow pace out there.”

Austin Forkner came into the race holding a three-point lead but also a severe knee injury, but he manned up for the main event, holeshot, and battled up front by shoving Sexton around. Sexton played it cool and let Forkner go, and Forkner began to attack his teammate Martin Davalos for the lead. Once he overjumped a big single, though, he smashed his knee to much to continue. Forkner pulled off the track, and his season is likely done.

“Maybe I came into Austin a little bit off the start, and he was really…I can’t knock him,” said Sexton. “He was going for it, he was riding so much better than he did in his heat race. I felt like I had a target on my back, which was kind of odd because he’s the one that was leading the points. After those couple of incidents, I was just like “I better let this race come to me” because I felt like I had to speed to go get those guys. Track was gnarly, though. It was probably the toughest 15+ 1 I’ve ever done. I feel like I’ve done a good job of taking it race by race. Now I have the red plate and it feels so good now.”

Mitchell Oldenburg rode a solid race to net second, his first podium in two years. “Last couple of years have been kind of a struggle for me, and really what it all boiled down to was bad doctor advice,” said Oldenburg. “That’s been the last couple of years, and blowing out my knee last year. The injuries have been not too hard to overcome physically, but mentally it’s been tough. I think the people around me believe in my more than myself. It’s been a long few years but we kind of see the light at the end of the tunnel.”

With Forkner going out, Sexton’s main title rival is now Justin Cooper, but Cooper didn’t bring his usual speed to his home race this weekend. He said he couldn’t get comfortable with the bike setup, and then had a crash earlier in his heat race which set him further back. “We did our best to get it fixed, and it worked, I felt really good in my heat, got up to second but then I jumped into the hay bales. It was kind of downhill from there. I didn’t feel like myself in the main event, but that’s not to take anything away from these guys. They rode great.”