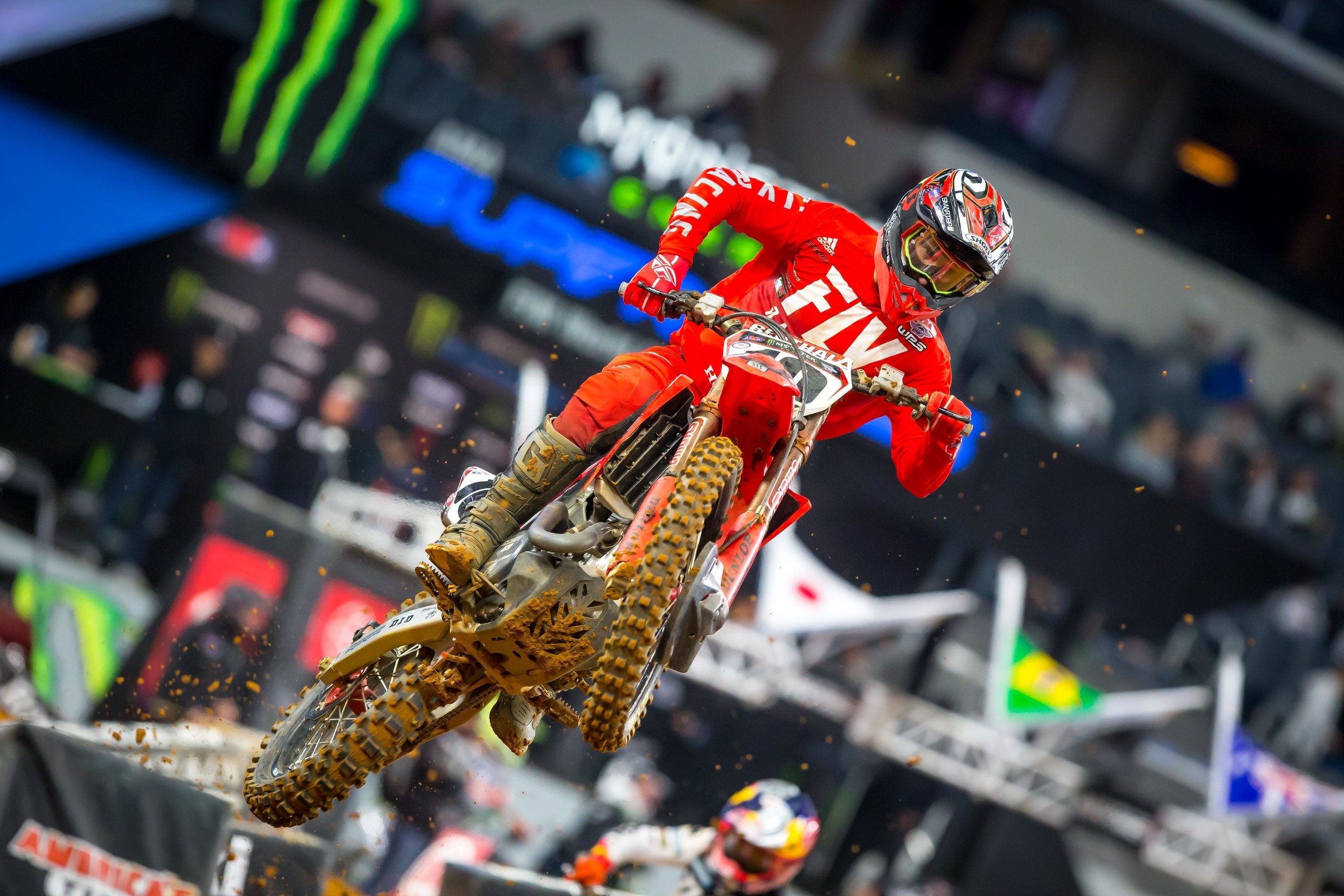 Comment: Early in the season Anderson broke his arm and some ribs, lacerated his liver, sustained a partially collapsed lung, and injured his back. He’s back on the bike and is preparing for the Lucas Oil AMA Pro Motocross Championship.

Comment: After dealing with an injured shoulder for several rounds, the decision was made to pull the plug on Barcia’s supercross season in order for him to be ready for the Lucas Oil AMA Pro Motocross Championship.

Comment: Bloss tore his ACL before the season and is planning on getting back to racing at the High Point National. Need more Bloss in your life before that? Check out this interview we did with him earlier this week.

Comment: Brayton will return to racing after tearing his MCL and straining his ACL in Seattle.

Comment: Catanzaro plans on racing a borrowed bike for the final two rounds after breaking two ribs, puncturing a lung, separating his shoulder, and fracturing his Scapula in Houston. He raced in Denver, only to discover he also had a fracture in his wrist. One might think the solution would be to sit the night out, but for Catanzaro it was to simply not jump the triples in the rhythm lanes. As for East Rutherford, he says he’s healed quite a bit in the last two weeks and thinks he “should be able to actually jump a triple this weekend.”

Comment: Enticknap will miss the rest of supercross after breaking his sacrum and L5 vertebrae in Nashville. He had surgery to have some hardware installed on his sacrum and pelvis.

Comment: Friese tore his ACL in Arlington and won’t be lining up for any more supercross this season.

Comment: Peick is back on the bike and has resumed training after sustaining serious injuries at the Paris Supercross. He’s still waiting on his eye to heal more before he can ride at a competitive level, but it’s still great to see Peick back on his motorcycle.

Felt awesome to get back on my @jgrmx @suzukicycles bike, it’s been 5 long months of battling this injury. I still have a ways to go 2 more surgeries to fix my nose and eye. I still have no time frame of what the future looks like for me but I’m doing all I can to attempt to race again. Thanks to everyone backing me and supporting me through this awful injury and @road2recovery for managing all of the behind the scenes paperwork insurance. @flyracingusa @jgrmx @suzukicycles @toyotaracing @teamtoyota @kmcwheels @alpinestarsmx @scottmotosports @yoshimura_rd @surfaceproducts @gopro @kellyacleland4 @louiepeick @lynettepeick @lala_land_lauren @dallas_peick @soules86 @steevehowe the list goes on ????. ? @swapmotolive @swapmoto

Comment: Reed sustained eight broken ribs, a broken scapula, and a collapsed lung in Seattle. Reed hopes to be back for Vegas, but nothing is official.

Comment: Stewart hoped to be ready to race for East Rutherford following a bad crash with Tyler Enticknap in Nashville, in which he sustained a concussion, but was unable to receive clearance to race. He’ll still be on hand to interact with the always large fan 606 contingent that shows up for him in East Rutherford.

Comment: Tedder is back on the bike and may make it back for Las Vegas. If that doesn’t happen he should be back for the Lucas AMA Oil Pro Motocross Championship.

Comment: After crashing in the main event in Denver, Wilson had an MRI and discovered he’d sustained a shoulder injury, as well as a contusion on his kidney. He isn’t expected to need surgery but will sit out the remainder of supercross and will assess his situation following a few weeks of rest and therapy.

Comment: Ames will miss all of supercross with a compound fracture to his left radius and ulna.

Comment: Craig will return to racing in East Rutherford after spending most of the season sidelined with a fractured and dislocated thumb.

Midweek SX before heading out to East Rutherford tomorrow. Digging this set up ?

Comment: Crown is out for the season after dislocating his ankle in a crash.

Comment: Fleming is out for the season with a broken femur, clavicle, tibia, and fibula suffered in Atlanta. We caught up with him earlier this week for an update.

Comment: Forkner crashed during practice in Nashville and sustained a knee injury. He was initially listed as day to day for East Rutherford, but the decision has been made for him to race this weekend to try to keep his 250SX East title hopes alive.

Comment: Martin is out of his turtle shell and has been cleared to ride a stationary bike after suffering a burst fracture to his vertebrae last year at Muddy Creek. Unfortunately, he isn’t expected to race again until the 2020 supercross season. In the meantime, he’s been keeping himself busy running a vacuum and scrubbing toilets. Check out what he's been up to in this recent interview.

Comment: McElrath’s team told us he’s been dealing with nerve pain in his back since press day in Atlanta. It got worse to the point where, in Seattle, McElrath had to pull out of the night show. He hasn’t raced since Daytona and probably won’t race again before the season ends.

Comment: Owen will be back in East Rutherford after missing time due to broken vertebrae and muscle contusions in his back.

Comment: Schehr crashed in Seattle and ended up getting landed on. He sustained a lacerated liver and kidney, collapsed lungs, a damaged artery, five fractures in his spine, eight broken ribs, and a broken arm. He’s out for the season.

Comment: Shaw crashed while practicing motocross and broke his femur. He’s out for the season.

Comment: Smith injured his wrist early in the season and will miss the rest of Monster Energy AMA Supercross.

Comment: Weltin will miss the rest of the season following a crash in Daytona that left him with a fractured clavicle and scapula, and partially torn labrum.