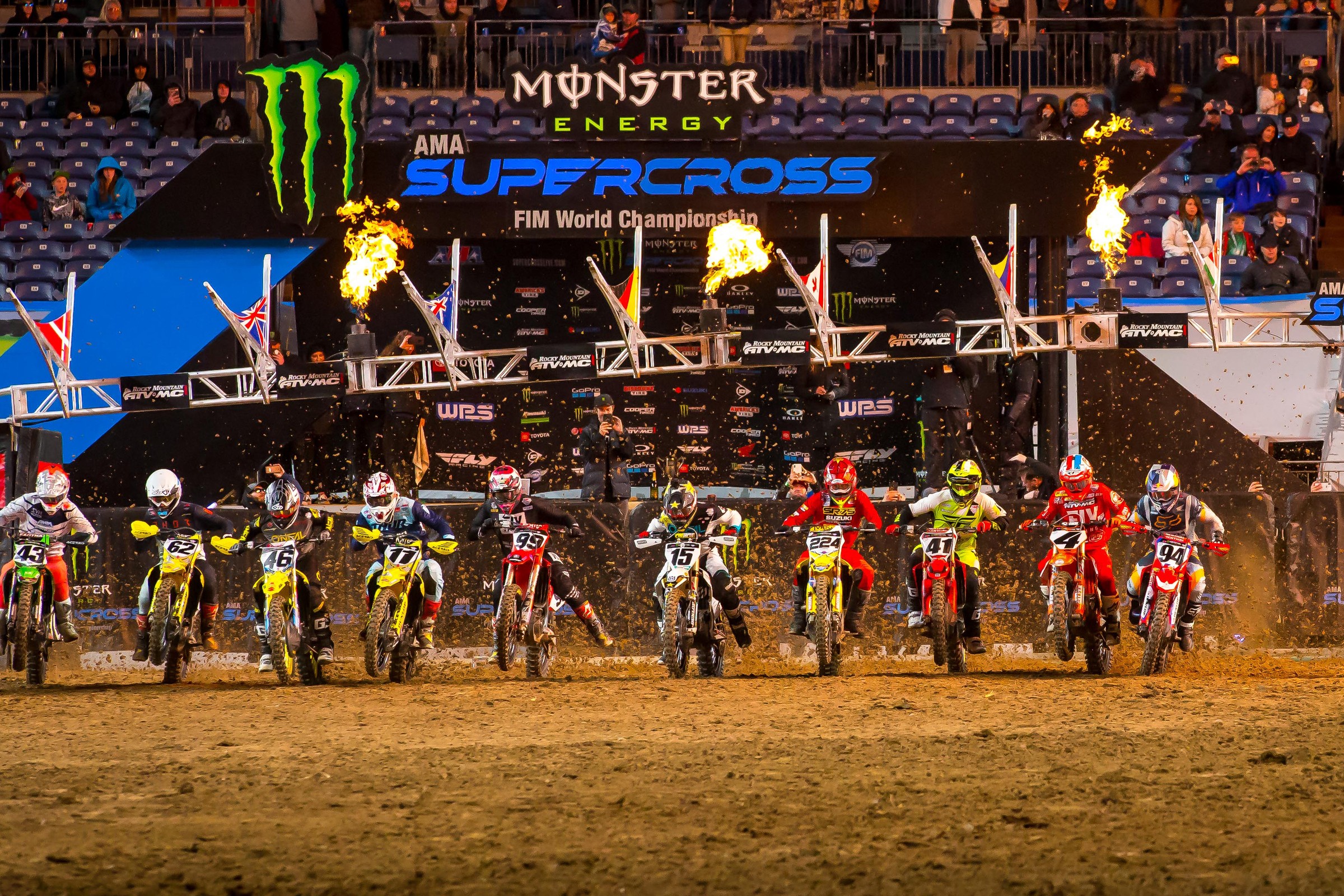 For the final time in this 2019 Monster Energy AMA Supercross Championship, we are headed to the East Coast. East Rutherford, New Jersey, sits right outside Manhattan and all that NYC entails. The biggest media market in America (and probably the world), New York is a big deal for supercross and last weekend’s Fox News feature was a cool preview of what could be reality for our sport.

This round seems to be in an every-other-year pattern with Foxborough (see: Boston) to capture the New England market. Most of the fan base is pulled from the surrounding areas like Pennsylvania, southern New Jersey, etc. It would be great to think that supercross is pulling fans out of Manhattan over to MetLife but I think that’s a long shot at best. Still, there are a lot of diehard fans in the Northeast that only get one shot at supercross and they will turn out ready for a great spring Saturday.

East Rutherford’s track is a busy one. There aren’t many open spaces or flat straightaways which, as a fan, I can appreciate. The start is nice and long, sweeping to the left in a 180. The first rhythm section should create an opportunity for the riders at the front. If they can triple up, then step on/off, they will create a nice cushion entering that fateful first bowl berm. Without any space, that first bowl berm can result in riders who may have had the inside in the first turn getting pinned to the outside and losing several spots. Watch for riders moving over slightly towards the inside down this rhythm to try to prevent that scenario.

The bowl berm sets riders up for a stadium-long rhythm section. There are two ways to execute this section. The first is to step on/off, triple, triple, and double to the inside of the next 90-degree right. The other option will be to step over the first tabletop, triple (3’ to 3’ which is ideal), triple, and then triple to the outside of the corner. Which option is chosen could very well be decided by the next section, though. The following section could be a triple-triple if the outside line is taken and seat bounced. I say “could” because there doesn’t seem to be a berm to pivot on, making it much more difficult. I think the more likely line will be to cut across the inside of the corner, roll the first jump (standing up if possible), the double-triple into the corner.

These two straightaways are a great example of how riders will need to plan ahead, picking a rhythm option in the first section that will ultimately put them in the right rhythm in the second lane. This is really the only section of the track that riders will have to analyze and try different options.

The finish line jump is next, coming in the middle of the lap. A 90-degree left leads to a short straight and a hard corner back to the left. There is a huge double that spans the entire start straight up next, similar looking to Anaheim 1’s double exiting the tunnel. Watch for the 250 riders to really struggle here and a big opportunity for block passing in the corner before. To jump the double, riders will be forced to leave the inside open. Block passes in this section are very frustrating to the lead rider as everyone loses multiple seconds overall. It’s effective if needed for a qualifying spot but a negative move big picture.

After landing from the double, riders will rail around a 90-degree right and over the only standard supercross triple. This should be fairly easy to jump as long as the corner ruts don’t get rough or deep. Upon landing, there are four small jumps that will either be a double/double or triple/single into the next bowl berm. The first of two whoops section comes out of the corner, giving riders a real passing opportunity. With these two whoops sections almost back-to-back, riders will be looking to make a move here every lap. East Rutherford whoops are very prone to deterioration, as the soft, spring dirt won’t hold up all day. The usual suspects of Cooper Webb and Marvin Musquin will find a way to jump, hop, and skip through these by main event time. The second set will be interesting because most riders will opt to stay tight to the inside corner before and guard against any aggressor. An inside rut will form and a rider like Musquin will benefit from this slow entry. He can triple or wheel tap four, gaining time on anyone trying to slowly blitz their way through.

The two rhythm sections back to back and the two whoop sections will be the make or break areas on this track. There will be passing opportunities and I expect some aggressive riding at the penultimate round. This round has seen high drama in recent years with last year’s Musquin/Tomac incident, Tomac’s crash in 2017, Musquin pulling over in 2017, Savatgy’s meltdown, Ronnie Stewart riding backwards, Deven Raper smashing Tyler Enticknap, etc. Maybe 2019 is boring but history says buckle up for this weekend of the calendar.

How big of a points cushion will Webb cruise into the desert with?

Will Austin Forkner be able to put up a fight?

Will East Rutherford bring anything close to the entertainment that the 2017 round brought?

Which Marty Davalos will show up?

Eli Tomac has won two races in a row and could realistically win out if he continues on with his momentum. For the third year in a row, though, it could be too little, too late.

Cooper Webb has a nice points lead and is doing a great job of managing this series. His Denver performance was impressive.

Justin Bogle has found his form, steadily improving in recent weeks. His fourth place at Denver was very uplifting as the series winds down.

Get the Latest From Racer x

Forkner has a herculean task at hand. He needs to beat Justin Cooper and Chase Sexton in a two-race series, meanwhile managing a serious knee injury that most wondered if would allow him to ride at all.

A month ago, Marvin Musquin was riding a wave of momentum and many pointed to him as the biggest threat to Cooper Webb’s first 450 title. Things have soured, though, leaving him hoping to merely be mathematically relevant going into Vegas.

Justin Barcia missed the Denver round due to mounting injuries and won’t be back until Hangtown.

Dean Wilson had a big get-off at Denver and will be on the rehab train until we take things outside.

Tomac wins going away but still faces a sizable deficit with one round remaining.

Forkner puts Egyptian mummies to shame with the sheer volume of tape he utilizes on his knee.

Jason Weigandt boasts a post-coital glow all day Saturday after spending a glorious evening of conversation with Barry Carsten.

The New York City mayor declares a state of emergency as the supercross industry finds time to invade the “Big Apple” Saturday night.