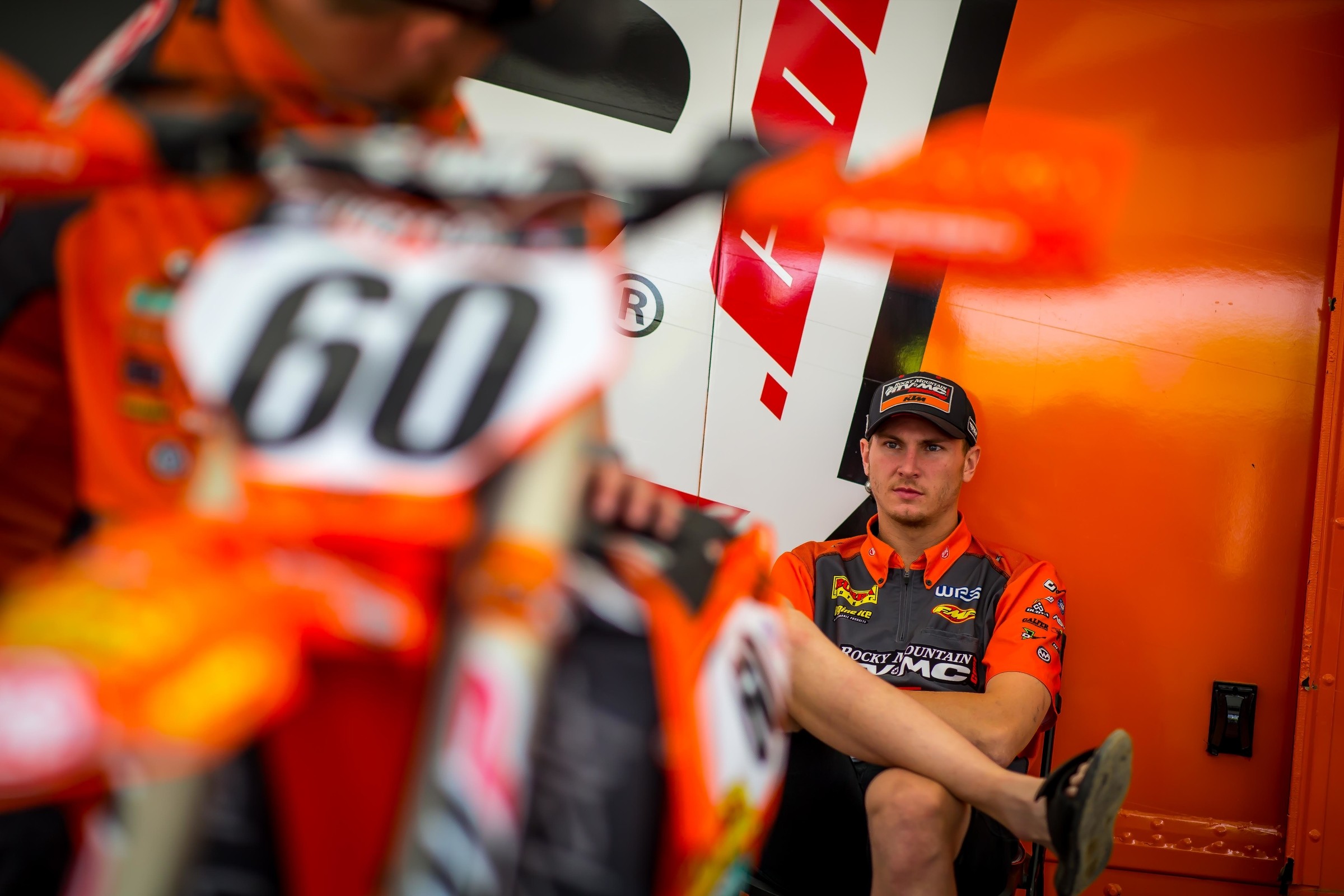 As good as this season has been, it’s been absent a rider who could have made things even more interesting. Thanks to a torn ACL, Benny Bloss has missed all of Monster Energy AMA Supercross in 2019 and won’t return until several rounds of the Lucas Oil AMA Pro Motocross Championship have elapsed. But if you think he’s been taking it easy, you’re easily confused. Bloss has been working hard to get back in the game as strong as possible, and hopes to be on the podium late in the season.

For an update, we dialed him up for a quick chat.

What kind of games are you playing?
I really like Call of Duty, Madden, NBA2K, and I tried to get into the motocross thing but I’m so bad at it. It’s frustrating.

Well if you were playing the racing games a lot you could call it training!
Maybe a little bit. [Laughs] I got the new game [Monster Energy Supercross – The Official Videogame 2] and it’s pretty cool, you can design your own track. But I’m so bad at the actual playing that it’s not even fun. I’m that bad.

Let’s get into your knee injury a little bit. How’s it feeling?
It actually feels really, really good. Today in physical therapy I was doing one-legged jumps and I can pretty much jump as far as I can without it bothering me. I get sore after a long cycle, or after a hard effort on the bike, but that’s to be expected. So far therapy is going really well and everything has been a lot smoother than I thought it would be.

Classic mid ride photo, been spending a lot of time on this thing lately

What about flexion? I tore my ACL a while ago and bending my knee all the way was the hardest part.
I struggled more with straightening. Bending my knee back is equal to my other leg, but it took me two full months to be able to straighten it all the way.

You’ve had a few other injuries. How does this compare in terms of the physical work required to get back to where you need to be?
The physical work is different. I’ve never done a knee before this, but I’ve done my shoulder three times. Everyone told me before my knee surgery this was going to be the worst thing I’ll ever go through, that I was going to hate it, and therapy was going to be so bad. But honestly, it’s a breeze compared to shoulders. I wouldn’t even compare the two injuries. Getting released to go cycling, or to swim, nothing has been crazy difficult. That was a surprise to me, because with shoulders, pretty much everything you do hurts for the first three or four months before you start getting better. With the knee, the first two weeks were really hard, but since then I’ve been able to train. And now I’m at the point where I can train hard and not really have to worry about anything. It doesn’t really affect me too much.

Nice! Did you get a cadaver ligament or a graft?
A graft. We did the patellar tendon.

Talk about being off the bike. Is the thought of trying to get back to a professional level daunting after not riding for so long?
Not really. I’m really close to being able to ride so I’m thinking about it a lot. It almost makes you nervous to start riding again, but to get back to racing at that level, I’m so excited. I’ve been watching these last few races and it’s been killing me. These last three weeks have been really, really hard for me. The previous two-and-a-half to three months before weren’t too bad, I could block it out pretty good. But I went to Nashville and ever since it’s just been eating at me so bad. I’m a couple weeks from being able to ride, and the closer I get it seems like the weeks are lasting longer. I’m just so excited to get back to racing. I’m probably not going to be amazing at first, but I just want to get back out there and work to get back up front.

Is High Point still the goal?
Yes, that’s the goal right now. That’s kind of what we’re hoping for.

Have you set any goals or expectations, results-wise, for when you come back?
For the first couple rounds I don’t have too many goals. I just want to get through them and be solid. The goals are more for later in the series. By Washougal, I really want to be on the podium. I got the first taste of it in a moto last year at RedBud and since then I’ve been craving that feeling. So for the first two rounds [once I return], I just want to get through them smoothly and be able to work hard toward getting back on the podium.

I feel like that’s what you guys always say, that you just want to get through the first few rounds smoothly, but then when the gate drops that plan goes out the window. It’s go time, we’re racing.
[Laughs] Yeah, it’s hard to say that I’m going to go out there and go easy. Realistically, when you get on the bike, all you want to do is go as fast as you can. But sometimes you just have to try to get through it. I don’t want to come back and do something stupid I wasn’t ready for.

Sometimes when guys are on the couch for a while they gain insight from being away. Has that happened with you, or have you just been counting the days?
I can’t wait to get back racing, but I have learned a lot of stuff about my body that I probably should have been doing before this injury. Going through physical therapy there’s certain stuff, balance-wise, that I feel like I’m better on my bad leg than I am on my good leg. Maybe not now though because I’ve been working on it. And it’s cool to be able to watch the races. I’ve never really been able to watch people ride and see certain things like a trainer would.  Since I’ve been injured I’ve been trying to pay close attention to people and what they do. I’ve been able to notice stuff a little better. I’m going to see if I can translate that stuff into my riding.

Okay, so obviously injuries suck, but it sounds like you may have gained an advantage because of it.
Yeah. I’ve always struggled with my weight and keeping it off, and since I got injured I’ve been dieting really good and I think I’m in as good of shape now as I was when I got injured. We’ll be able to tell better when I get back on the bike, of course. I feel more prepared going into this outdoor season than in certain years before when I haven’t had as much preparation. I feel really good and I’m just ready to get back on that bike.

That’s a good point. You’ve had team changes and things like that in the past, but you’ll be healthy, rested up, and ready to go this time around.
Yeah, I know what it’s like to go through the full supercross season and into the outdoor season. Midway through the outdoor season a lot of guys I know start feeling tired. I’m feeling pretty positive about it because I’ll be coming in fresh and the guys will hopefully be tired. I’m going to try to capitalize on that.