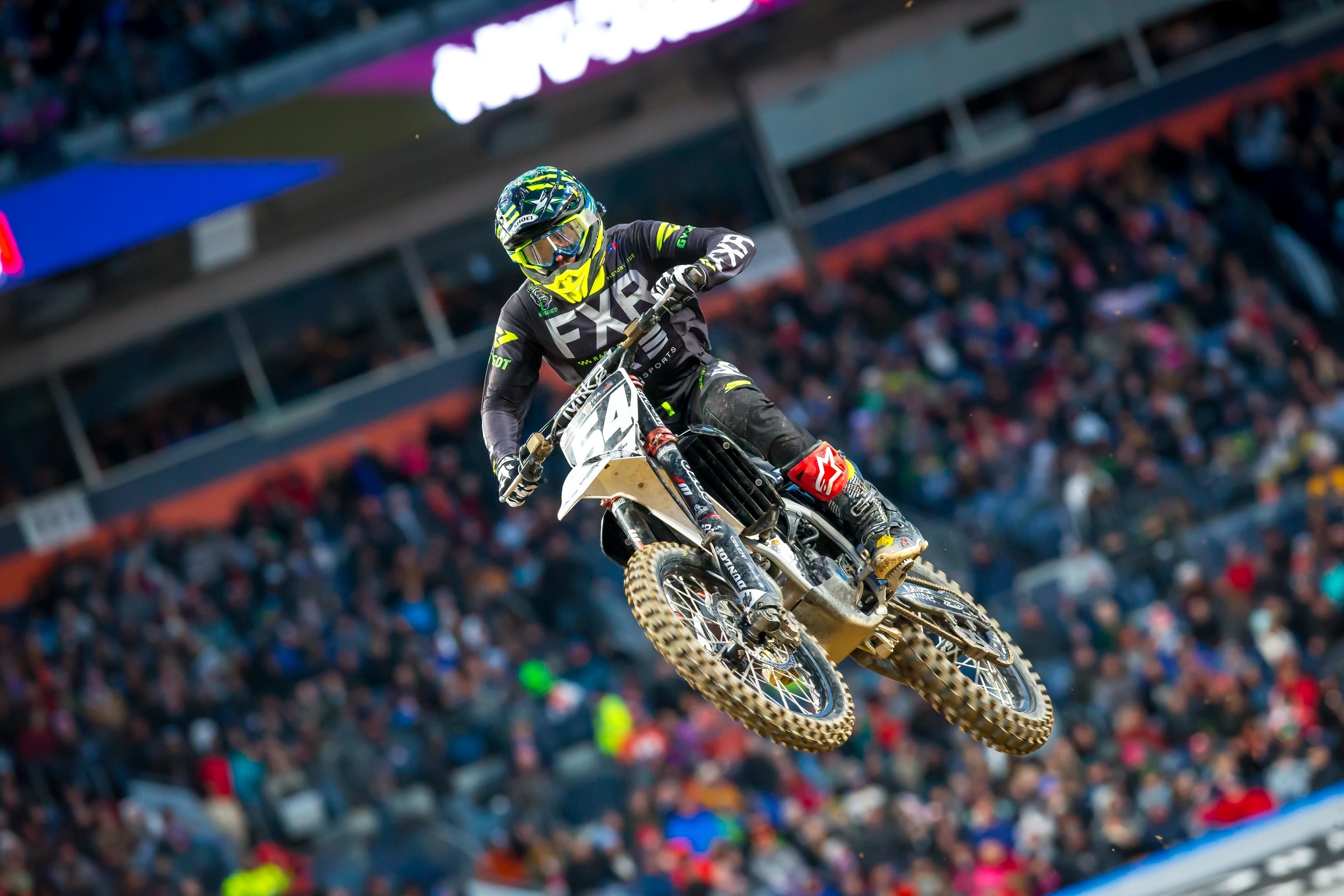 A shot with the Gas Monkey/AJE Motorsports Husqvarna team set up privateers Justin Starling and Dylan Merriam for break out seasons, but both suffered through injuries in January which hurt their results (meanwhile their teammate, Chris Blose, has been crushing it the whole time).

Both Starling and Merriam are finally healthy and now turning in some of their best rides ever: Merriam with a career-best of ninth in Denver, and Starling logging 7-8 finishes in the last two 250SX West Region races, as well as making a few 450SX mains on the East Coast.

Starling also threw in some Broncos gear for the weekend, even though he’s a Florida boy. We let the two privateers explain it together post-race in Denver.

Racer X: Why are you a Broncos guy? I’m totally confused over this.
Justin Starling: So, never was a big football guy. Came and stayed in Colorado the past two summers. Honestly, at the end of my first ever game here I kind of fell in love with the organization. I thought it was a really cool logo as well, but all the players seemed really cool. I actually got to meet Emmanuel Sanders [Broncos wide receiver] once, and that was really cool. He was really down to earth. I was like, if I’m going to support a football team or watch that I’m going to go with the Broncos. I’ve pretty much gone full bore with them too.

So give me the run-down of all the Broncos things you had just today?
I had socks, a jacket. I had a couple hats in my bag. I stuck with the one I’m wearing now, the silver one. I had a Von Miller [Broncos linebacker] jersey and an Emmanuel Sanders jersey. I had to decide which one I wanted to wear for sight lap, I went with Sanders. Then I had my Broncos helmet. So I was wide-open with it.

Why were you in Colorado? What was that about?
So, I’ve been in Florida my whole life, just always humidity, training, training, training. But I haven’t done the outdoors in a few years, so I figured I would just try something new and go to altitude. I think it was a good move for me because I think it paid off a little tonight knowing how to breathe in it. Just switching things up, training with a new trainer that lives out here that’s actually worked with [Justin] Barcia and [Ryan] Dungey in the past, so it was really beneficial. I’m a big cyclist, and it was a cyclist guy. Just trying something new. I think it’s been working.

Are you still here or is this just a summer thing?
Just over the past two summers. This summer I’m going to go back to Europe and race the nationals there. But yeah, if something was to fall through with that I’d come back here.

The riding was good. Was that maybe your best of the year?
Dylan Merriam: That’s my career best, actually. Before that it was a 12th in Salt Lake [City] last year. So first top ten in supercross, ninth overall. I was pretty stoked on that. [Steve] Matthes pointed out the max points on fantasy.

You maxed out?
Merriam: I maxed out. So, everyone is going to be on my side for once. So that’s probably the most important part.

Starling, they screwed up on your fantasy rating last week. Everyone picked you and you came through.
Starling: Yeah, I know. I got to do it, but it’s cool. I’ll take it. I don’t play, but it’s cool.

We were sweating the LCQ last weekend.
Starling: I was in fifth and I was like, there’s so many people hating me right now. I made it happen. I put it in third, so it was safe.

For you, Dylan, this was a good opportunity on this team this year, but you had some nagging stuff at the beginning of the season, right?
Merriam: Yeah. Coming into the season everything was going so good. I was training at ClubMX. I ended up hurting my back at Anaheim 1. It kind of spiraled from there. I raced [Glendale] the next week, and that was literally everything I had left. My back couldn’t take anymore. I got an injection in my back and tried to race A2. Didn’t work. So I took quite a few weeks off, and when you take a few weeks off you kind of fall out of that race pace. Then jumping back in is kind of hard. Of course the first one I come back to is Atlanta, which is a Shootout. So that doesn’t help. Literally it took me the whole day to get comfortable. I literally never have a problem with rhythm sections but it took me until the last lap of the LCQ to finally hit the last rhythm. I rode good in the LCQ. Long story short, I started dead last. Funny story—the bike didn’t go into gear and I did a total dump the clutch and went nowhere.

You just didn’t realize it was in neutral?
Merriam: It clicked but it didn’t click all the way. I think when I put my foot down it might have hit neutral. I don’t know, but it didn’t go. I tried to go, but the bike didn’t go. Even my mechanic was like, “I saw the chain move.” It clicked, but it didn’t click into gear. Hey, it’s better than looping out like [Martin] Castelo did, especially on press day in front of all the top dudes.

So are you pumped that you finally are getting back to where you probably should have been or wanted to be all along?
Merriam: For sure. It’s unfortunate that we have one round now. We had two rounds and this is the first time that everything actually came together. But after I hurt my back, sprained my ankle, and then one weekend I’d be sick… It was just always something. Like I was telling Justin, this week was the first time I was actually able to ride three full days and then come to the races. I had a great week of training. Honestly, I didn’t even notice the altitude this weekend. I was pushing and everything felt great. I didn’t get fatigued. I didn’t get tired. Everything was clicking.

Starling, how’d it go for you?
Starling: It was good. Third top ten in a row in the [250SX] class. Definitely a turnaround. I got hurt at A1, then broke my wrist in Oakland. Rode [Glendale] and A2 sick. So honestly it was like we had a black cloud over both of us. But I took the time and buckled down and went back to Florida and just started training. Got back on the bike actually the day before Atlanta. Atlanta didn’t go very good for me. That was my first day back on supercross in six weeks. I did Daytona the next week and made the main event on the 450. I was just like, Okay, this is my worst race ever, too, but then I made it out of the heat. I was like, that’s a turnaround. So it’s going good now. I went to Seattle and a tenth. Went to Houston, a seven. Went to Nashville and put it in the main. Got a 15th in the 450. Came in this weekend pretty good in qualifying. I think I was P13 behind him, then P5 in the heat. Really good starts all day. Just rode it in to an eighth. I knew when he was behind me that he was going to be in shape the whole time, so I was like, man, am I going to have that time where I can kind of slow down the last couple laps, because I was a good fourteen seconds behind [Jimmy] Decotis, and he made me push all the way to the end. It was good. It was a good weekend.

Did you try to get him?
Merriam: I was trying so hard. I looked at him and I’m like, “Sorry, teammate, but I need to catch you.” It was weird because we had a very consistent gap, and then he would pull a little bit, just little bits, little bits, and then right towards the end I think he knew he was comfortable and he had enough gap. I almost took myself out as well as Adam [Cianciarulo] with about two laps to go. I might still owe him an apology for that one. That kind of wasn’t my fault, either. I spun going up the finish line lip and I took the inside rut. Hadn’t hit it all race. I only took it to try to get out of his way, and literally I almost killed both of us. So that was a squirrelly. But we redeemed ourselves and I’m pumped with how we finished.