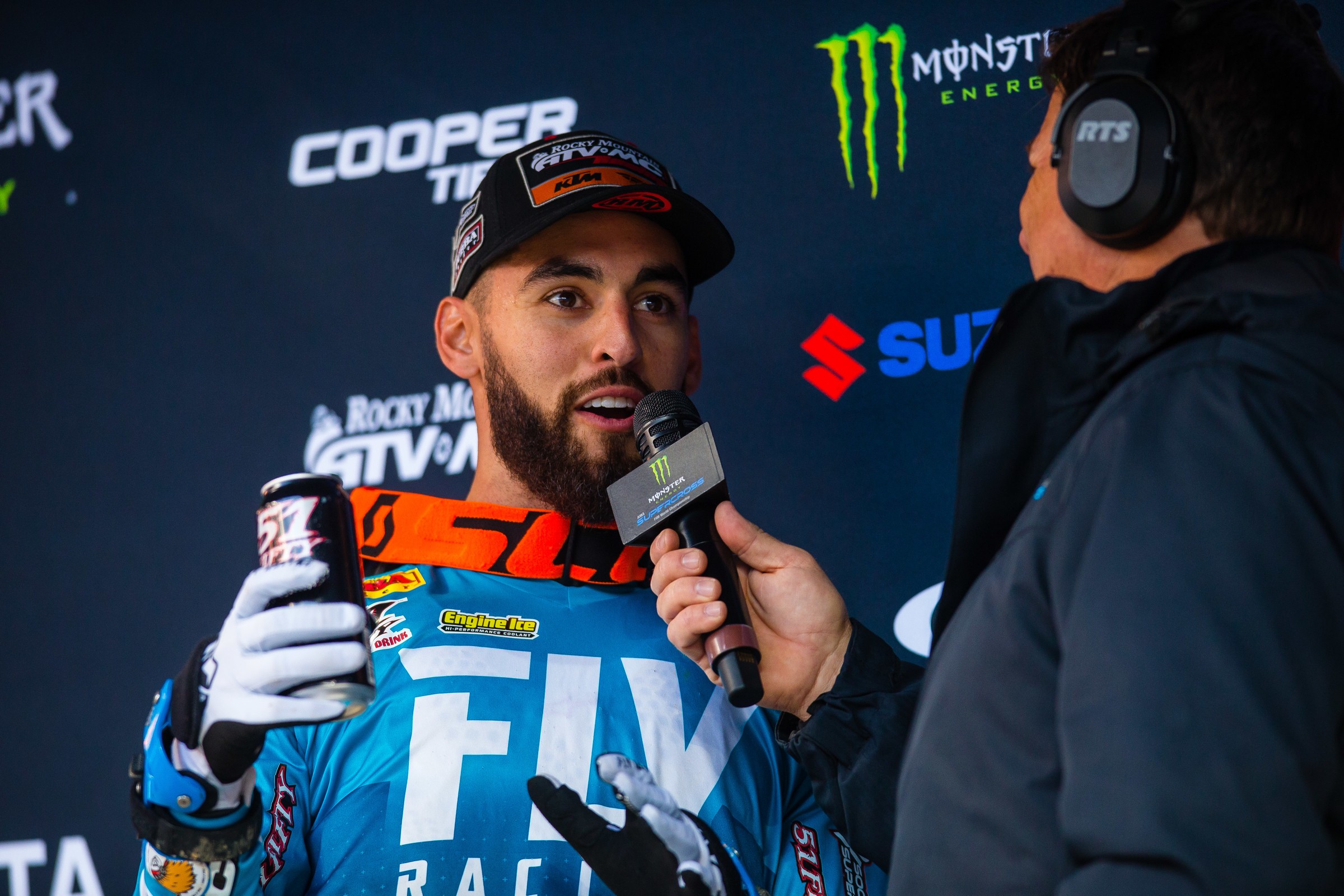 Justin Bogle didn’t start the Monster Energy AMA Supercross season the way he would have liked. Bogle, who rode for Autotrader.com/Yoshimura Suzuki last season, was a late fill-in for Rocky Mountain ATV/MC-KTM-WPS when Benny Bloss suffered a torn ACL in a practice crash at the end of December. Bogle had limited time on his KTM before the season-opener at Anaheim 1, and throughout the early portion of the season struggled with his physical fitness and health.

Recently, he’s become more comfortable on the bike and his speed out of the gate has improved significantly as the season has progressed, which contributed to his heat race win in Denver. After battling back-and-forth with Monster Energy Kawasaki’s Joey Savatgy, Bogle made a pass late to finish fourth on Saturday, tying his season and career-best in 450SX.

Our Steve Matthes caught up to the him after the race.

Racer X: It’s coming. It’s growing. It’s getting there. A fourth tonight, a heat race win. You wish there were another 10 races, huh?
Justin Bogle: Yeah, at this point. The thing is, we knew that this was how it was going to be. There’s times during the season you start questioning the whole process because you feel like shit. My goal was to get a heat win before this thing was over with. I was really happy with that. I haven’t won anything in so long that I needed to win something. So it felt good to win the heat. I did a little can-can, catwalk thing. Just having fun.

I didn’t quite know what that was.
Me either. It actually looked pretty stupid in hindsight, but whatever. I saw Cole [Seely] do a nac-nac when he won his heat, so I was excited. Then in the main I got another good start.

That was a battle. I don’t know if you knew what was going on behind you, but it was good.
I could see what was happening and I was just trying to make sure I didn’t pop so I didn’t get passed by all those guys. Me and Joey [Savatgy], we had a great race. Clean battle the whole entire race. It was really fun, actually. It was cool.

A track like this, very easy, very basic for you. I’m surprised, by the way. You didn’t do the three in off the rhythm. Something you would pull.
It was six of one, half dozen of the other. I thought the other way was just easier. We did 28 laps, so I would rather have done the easy line. In practice, I was doing some on-off [quad] thing. I was going table over two in the middle and it wasn’t any faster, but it was harder. So I just quit doing that, too. I’m having fun though, man. I’m starting to feel like myself again. It’s cool because I haven’t in… It’s been so long since I didn’t feel like a complete jackass out there. So it’s nice.

You’re out there. The track’s easy. You can do all this stuff no problem. Focus, I guess. Focus, concentrate, hitting marks. That’s a lot on the brain, I think, when you’re going around and around and around.
Yeah, especially when we’re doing 28 laps, man. I have severe ADD so I get very bored out there and I start counting birds and stuff. I think it was good for me to be in a battle the whole time. Just keep me focused on going forward. I’m really happy with today. So much progress. Beautiful.

All of us idiots in the media, we talk about you guys. We break them down. We go on and on about all the riders. You kind of had a mid-season lull there for a few races, and now you’re killing it. You didn’t change much. You didn’t say anything about massive changes. It just makes this sport so hard to figure out for us guys because you’re absolutely killing it right now and a month and a half ago it was 13th’s and 14th’s.
I had some health issues that I was dealing with that were just hard to figure out and get going with, but now I’m just starting to feel better. It’s one of those things I’m starting to feel better, which I haven’t in a long time, just physically even. I had so many injuries and my immune system was shot from all the surgeries I’ve had in the last year. Everything that was going on, my body was just drained. So I was having a hard time recovering and just not feeling like I was asleep racing on the weekends. So I’m starting to feel better with that. I’m just resting more. I’m just having fun. I really am. The people I got just right around me with [Brad] Frace and with Colt [Nichols], we just have a lot of fun.