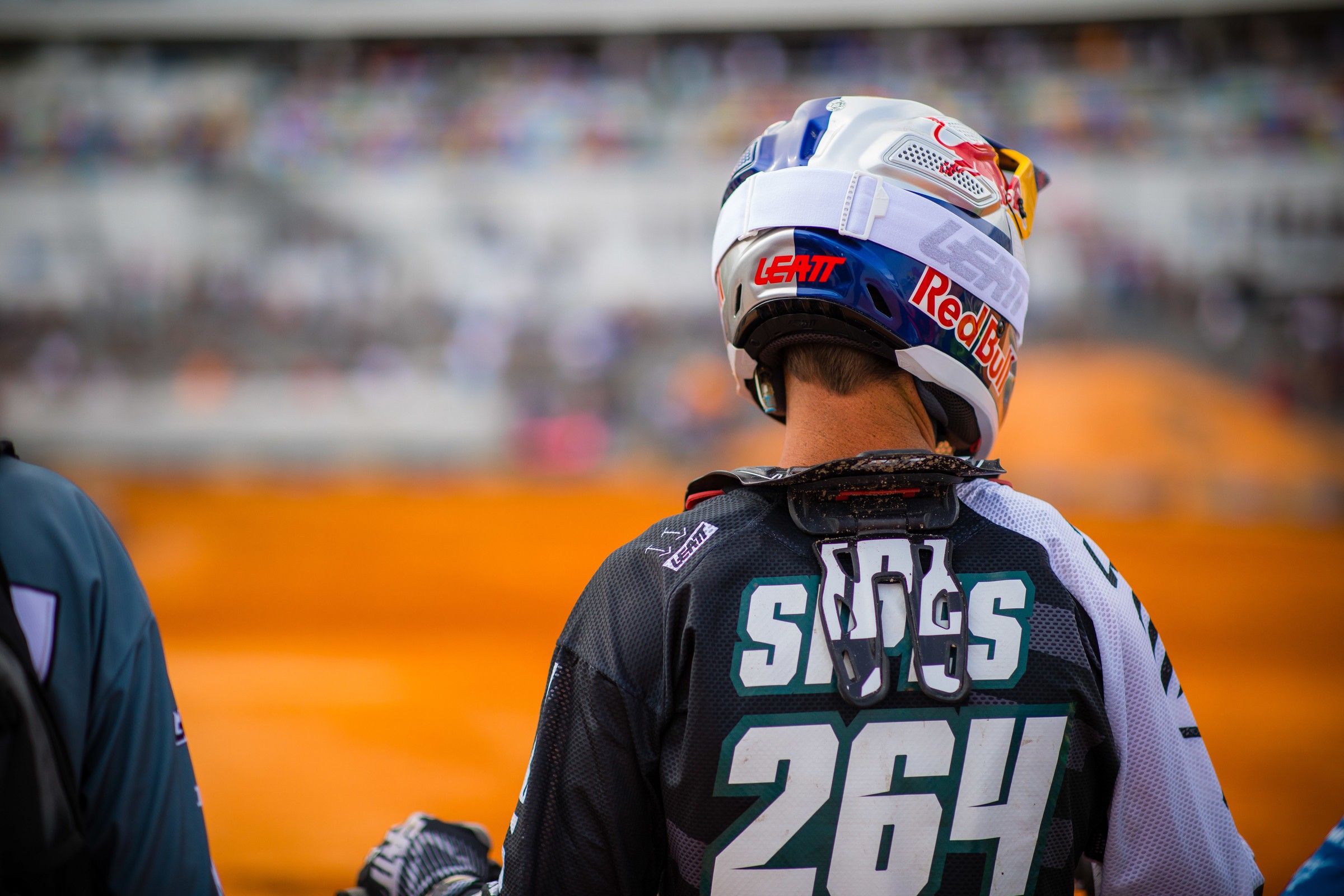 3 on 3 Sipes On An Insane Bike Week

Mr. Versatility Ryan Sipes has an insane schedule in 2019, but nothing will touch the crazy Bike Week he just capped off. Over the span of six days, Sipes raced the Daytona Supercross on Saturday (he finished 14th in the 250SX main event), the opening round of GNCC on Sunday (DNF due to shoulder injury), and the opening round of American Flat Track at Daytona (10th in the Singles main event) on Thursday. Following the Daytona TT last night, we had the chance to talk with Sipes about an insane last few days!

Racer X: Let’s start with supercross. How’d that go? Can you remember?
Ryan Sipes: Yeah. I thought supercross was cool. I put a ton of work in before it because the one thing I didn’t want to do was show up and get embarrassed. They’d be like, “Oh, yeah. He’s been gone a long time. You can tell. He’s old and he’s slow now.” I didn’t feel that way. I qualified well. I felt like I belonged out there, so that was cool. I rode a little tight in the main. The track was tough. It was one of those you kind of had to stay loose and kind of flow with it, and I was forcing it. Just one of them things. Didn’t ride like I wanted to.

You’ve done Straight Rhythm, but it had been a long time. You’ve done some nationals. You did a lot of this, what was it, 2013? That’s a long time to not race supercross.
Yeah. That’s what I’m saying. I was happy about after that long, because I’ve seen guys try to come back and look like, “Oh, he shouldn't come back.” I didn’t feel that way, so I was happy about that.

How did you tackle the big, long rhythm? What were you doing?
It developed different than I thought. I saw those guys going huge on it and I’m like, “They won’t be able to do it in the main. I’m going to stick to my double-double-double line.” Then they did it in the main, because the track didn’t really rut out that bad right there. They kept prepping it and making it less steep and easier. But I was still happy with my decision to be like, “Nope. Too old. Not going to do it. I’m going to stick to my double line.” Still even with that line, in the ninth through 14th range I was in, there was only one guy maybe trying it there. I even passed some dudes that tried it and messed it up. I’m like, I’m doubling. I’m good over here, and I passed them. I just made the decision, “I’m good. I’m not going to jump something crazy.”

We now know with your video analysis and all this that you try to take in and learn as much as you can. Do you now look back at the supercross and say, if I had done this, this or this, or I wish I had tried this, this and that? Or are you pretty satisfied? Or is there immediately as soon as you came off the track, you’re like, now I know? Even bike setup or anything?
No. The bike was really good. I just needed to be looser in the main. If I’d have rode like I did in the heat race… The heat race I got a killer start. I was third and [Chase] Sexton goes down. So then I had to go over his bike. I’m 15th. So I was just balls to the wall there. Block passing people. I rode good. Came from there to seventh or whatever. In the main I didn’t have that urgency. I wasn’t happy with how I rode in the main. The result, if you ride good, the result is whatever. But I didn’t ride like I wanted to. I’m happy with it that I didn’t look like an idiot, but you always wish you could do a little better.

First of all, how tired were you? Just literally like sleep-wise tired for Sunday?
It was bad. We left here… I got in the van at 10:30. I didn’t even watch all the 450 main. Driving it took us two hours to get to the tunnel of the speedway that’s like a quarter-mile that way. So it was 12:30 and we just got on the road. I got in bed, laid down at 1:30, and we got up at 8:00. But that was like 7:00 because the time change or whatever. So not a lot of sleep. Then get up there and it was like chaos. There was a few things we had to do to the bike and this and that. So I was pretty tired. Still, I’ve done that before. I’ve done races tired. It’s not the end of the world.

So that had no impact? It just made it gnarlier.
Yeah. I made it three or four corners in and I knew that my shoulder wouldn’t do it.

So this was an injury you already had?
Yeah. I did it like in ’07 originally and never got it fixed. I hurt it at ISDE last year, then I had a close call in the whoops practicing for Daytona that I was like, that didn’t feel good. As long as I didn’t make a mistake in supercross, I could do it. If I would have made a big mistake, it probably would have been bad. But as far as that, it was pretty good. I will say I woke up Sunday morning and I couldn’t move it. I was really sore. But you’re amped up for supercross. I was fired up. But the sand whoops was just way more of a pull on it. The pull is what hurts.

So it’s that much different that even whoops out here or jumps?
Yeah. You know sand whoops, they’re three-foot deep and they’re super soft, so every time it wants to endo you. It wants to put you over the bars. You have to pull back on the handlebars to keep that from happening. The first one I hit pulled. Basically I went to the doctor this week and he said a whole bunch of stuff. He said he couldn’t tell a lot without an MRI, but he said the rotator cuff muscles are basically not working anymore. I don’t know what a rotator cuff is, but that didn’t sound good. Basically when it pulls, I lose all my strength. I was still trying to ride. I did half a lap kind of sort of hard, but when it would pull out like that, I would lose all strength. So I almost hit a bunch of trees. I’m like, I can’t do three hours this way. I’m going to crash one of these times. I couldn’t go fast anyway. It wasn’t worth me hurting myself.

How nervous were you that this wouldn’t even happen? On Sunday were you afraid you wouldn’t be able to race?
No, I was pretty confident just because you don’t even use your arms here. You never pull or anything like that. I rode Tuesday and it hurt but I could ride flat track. Then today, it didn’t really hurt. It was a little weak but not painful. Got an MRI this week. Hopefully it’s not too bad.

Did you not want to go MRI-wise? Were you like, I just want to race this?
Yeah, I had to get through this one.

Like, I don’t want to know what it is?
No, because there’s nothing they can do anyway. I’m either going to be able to ride or not so let’s go and try.

So how’d this go?
Man, it was okay. I’m not super pumped at the final result. I think I rode good and had a ton of fun. This track was the most fun TT I’ve ever done. I’ve only done three, but this one, going on the asphalt was cool. Fifth gear wide open into a two-wheel slide was pretty cool. I felt at times I rode really good. I made a ton of cool passes and had fun. Just the main, I had second-worst start so immediately you’re in 10th or whatever. It was just like trying to pass guys. I was definitely a little faster than the guy in front of me, but I would try to go wide and set him up and I’d get passed by somebody else. It’s like, that was the opposite of what I wanted to happen. Then it was like you got to protect, so you can’t pass the guy in front of you. I made a few passes, but it was almost like somebody had to make a mistake or you had to physically move him out of the way. I did both, but that’s not super fun to do on a flat track bike.

What put you on that second row? What happened in the qualifying, the heat, the semi to lead up to that grid spot?
Qualifier I felt like I rode pretty good. I got second. The semi, just asleep on the start. I started seventh or eighth, from the front row. I was just asleep. I don’t know what happened. But then you get fifth in your semi. That means you’re tenth pick.

So that one bad start in the semi sets the whole thing up.
Yeah.

Talk about your front brake situation. That was pretty funny.
So I’ve never had any different brakes on this bike because I did Springfield last year and Sturgis last year, but they’re not super fast. We’re fifth gear wide open here and then braking on the asphalt, you can just squeeze it as hard as you can and the front wheel won’t slide. So you’re wide open until the last possible second and just grab a handful. I noticed in practice—the practices are five laps—by the fifth lap, my brake lever wasn’t doing much. It was like touching my knuckles. Come back and the front rotor—usually the rear rotor blew, but the front rotor blew. The brake fluid looks like crap. Borrowed a brake system from Johnny Lewis that Jeff Ward had on his bike and decided to go to an even bigger one. So I got the leftovers there, but it was better. It lasted. It didn’t fade away like the stock one did, which I had to be ready for it next time because I didn’t know to really kind of expect that.

I say with your program all the time, you get the credit as a good rider. What gets overlooked is that, by the way, it’s like a thrown-together program. You’re building bikes or your dad is helping. That’s even crazier that you’re doing all this, and you’re doing it on your own, total privateer style really. Learning as you go.
Yeah. That’s just the way it has gone so far. We’re getting good at it, I guess, and doing it ourselves.

But you had fun? The TT seems like that’s actually one of the bigger parts of your program now.
Yeah, I’m doing five of them this year.

So you’re excited about the rest?
I am. I really wanted supercross to go well. I didn’t want to be embarrassed. I didn’t want to be the guy that tried to think he was still fast and he wasn’t. So I put a lot of time in. I lived on the supercross track every day. I rode the flat track bike sometimes, a coupe times, and the GNCC bike a couple times. So I always think, man, if I could have spent three weeks solid on this thing, I think I could have done really well. But that’s one reason people don’t do what I’m doing. You’re going to leave some of the races a little disappointed.