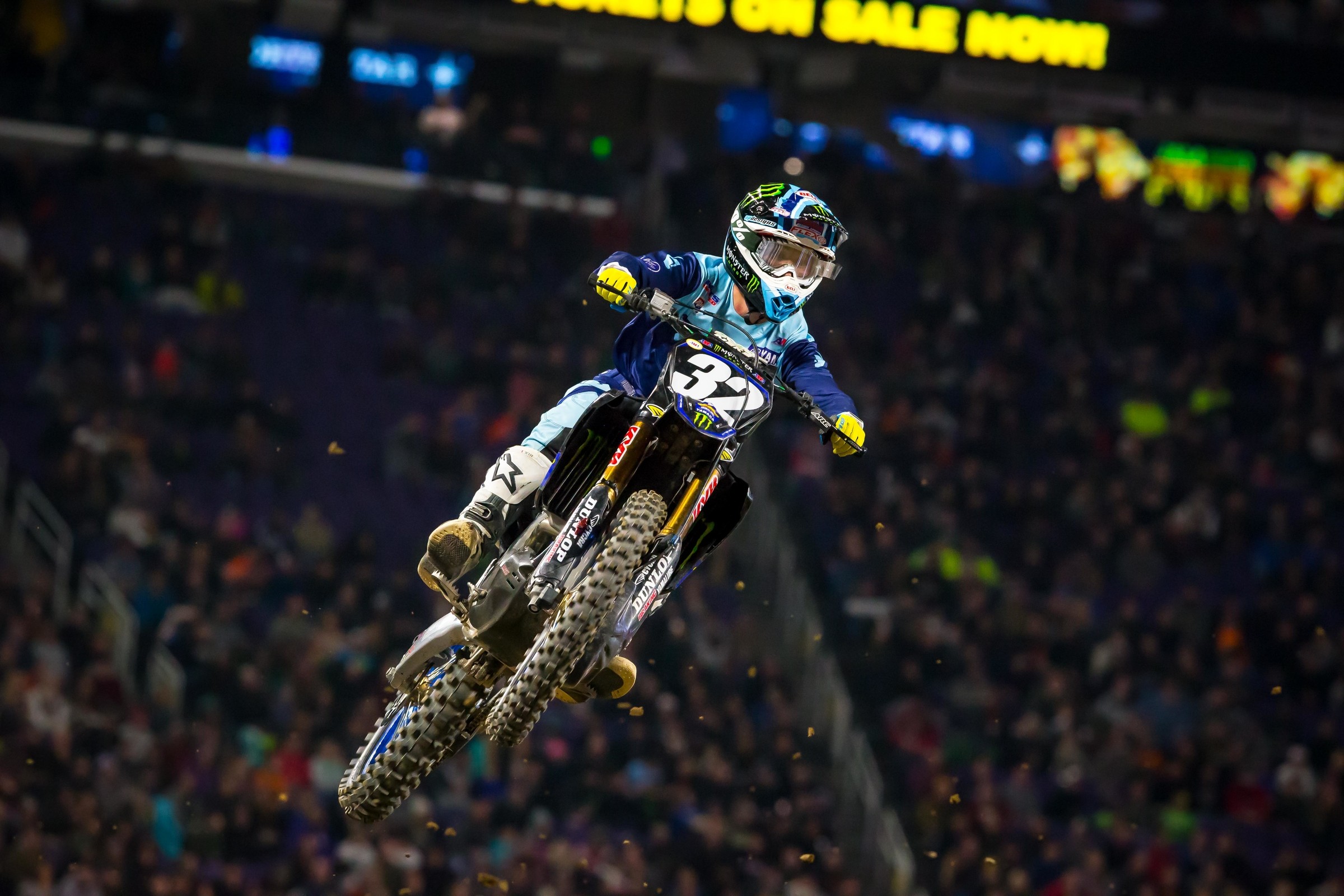 If 2019 Monster Energy AMA Supercross was a snake it’d be a constrictor because things just keep getting tighter and tighter in the 450SX points standings. After Oakland nobody could believe the top four were separated by just four points, but now, after six rounds, the top four are a mere two points apart, with Eli Tomac and Marvin Musquin sharing third with 123 points apiece. If one any of those four riders wins in Arlington he’ll leave with the red plate, no matter what happens behind him. Enjoy the unpredictability, it might not last all season! –Aaron Hansel

As mentioned above, the points in the 450SX are extremely tight right now. But, if you had to pick a rider with an edge it’d be Cooper Webb, even though he doesn’t currently have the points lead. He’s got three victories stacked in the win column compared to Eli Tomac, Justin Barcia, and Blake Baggett, who all have one, and is riding better than we’ve ever seen. Last time he got a win he followed it up with another. Think he’ll go back-to-back again in Arlington? -Hansel

The points doesn’t show it but Joey Savatgy is improving swiftly in his rookie season in the 450SX. He’s logged some fast times in practice (third fastest in Oakland and fastest in Minneapolis), won a heat race in Oakland, and led 14 of 26 laps last weekend in Minneapolis before eventually finishing fourth. With progression like that you can’t help but think he’ll be knocking on the door for a podium sooner than later. Could it be as early as Arlington? –Hansel

So far this season the LCQs have been relatively mild, but that all changed in a big way in Minneapolis. At times it was like a demolition derby out there, with guys going off the track and banging for position seemingly at all times. Sam Redman was blasting his way forward before going down hard in a rhythm lane all by himself, Lane Shaw and Joey Crown bumped, which sent Crown sailing over a berm, and then Shaw tried to block Ramyller Alves on the inside and ended up taking them both out. To add insult to injury, Shaw then got run over. Twice! It was chaos, to say the least. Except for riders ending up underneath tires, let’s hope the animals get just as wild in Arlington. –Hansel

We know Justin Cooper is fast—he killed it in the Lucas Oil AMA Pro Motocross Championship last year. What we didn’t know was if his skills would be just as effective in supercross. After all, before Minneapolis his pro supercross career consisted of just one race. Turns out he’s pretty good! The Monster Energy/Yamalube/Star Racing Yamaha rider was in seventh after one lap but was able to steadily move up and ultimately nabbed the final podium spot from Alex Martin as the race was coming to a close. How much better can he do if he gets a good start in Arlington? -Hansel

Ken Roczen is going to win… eventually. The current 450SX points leader is riding too well not to garner his first victory since San Diego 2017. In the meantime, Roczen continues to pound home that he’s not totally upset with being on the podium, that he hasn’t made it out of the West Coast swing in the last two years, and his goal this year is to take what comes. And it’s worked! Roczen holds the points lead for a second time this year entering round seven, and let’s be honest: a win is coming soon. -Chase Stallo

His return was delayed a week after another testing crash, but two-time 250SX East Region Champion Zach Osborne will make his 450SX debut this Saturday. Osborne missed the opening six rounds recovering from a collarbone injury sustained prior to Anaheim 1, but he’s fully healed and will race this week. Lots of “flying at the test track” talk in regard to Osborne—mainly from our esteemed colleague Steve Matthes—but the chatter is certainly there. Let’s see if Osborne delivers this weekend. -Stallo

It’s been a rough start to his rookie 450 season for Justin Hill, who has yet to garner a top ten finish in five races and missed the last two rounds due to a rib injury sustained during practice in San Diego. After a week off, Hill is back in action this weekend and could really use a good finish to jumpstart his rookie season. -Stallo

Another rookie that hasn’t had the flashiest start to his rookie season is 2018 250SX West Region Champion Aaaron Plessinger. No, Pless has not been terrible—he has four top ten finishes—but we’ve yet to see a breakout ride from the champ. Could it come this weekend? -Stallo

Chris Blose is currently ninth in 250SX West Region points, but he’ll make his 2019 450SX debut this weekend in Arlington while the West Region is on break. Blose is a veteran of the class, having scored six career top ten 450SX finishes. If you’re a PulpMX Fantasy player, he is definitely worth keeping an eye on this weekend. -Stallo