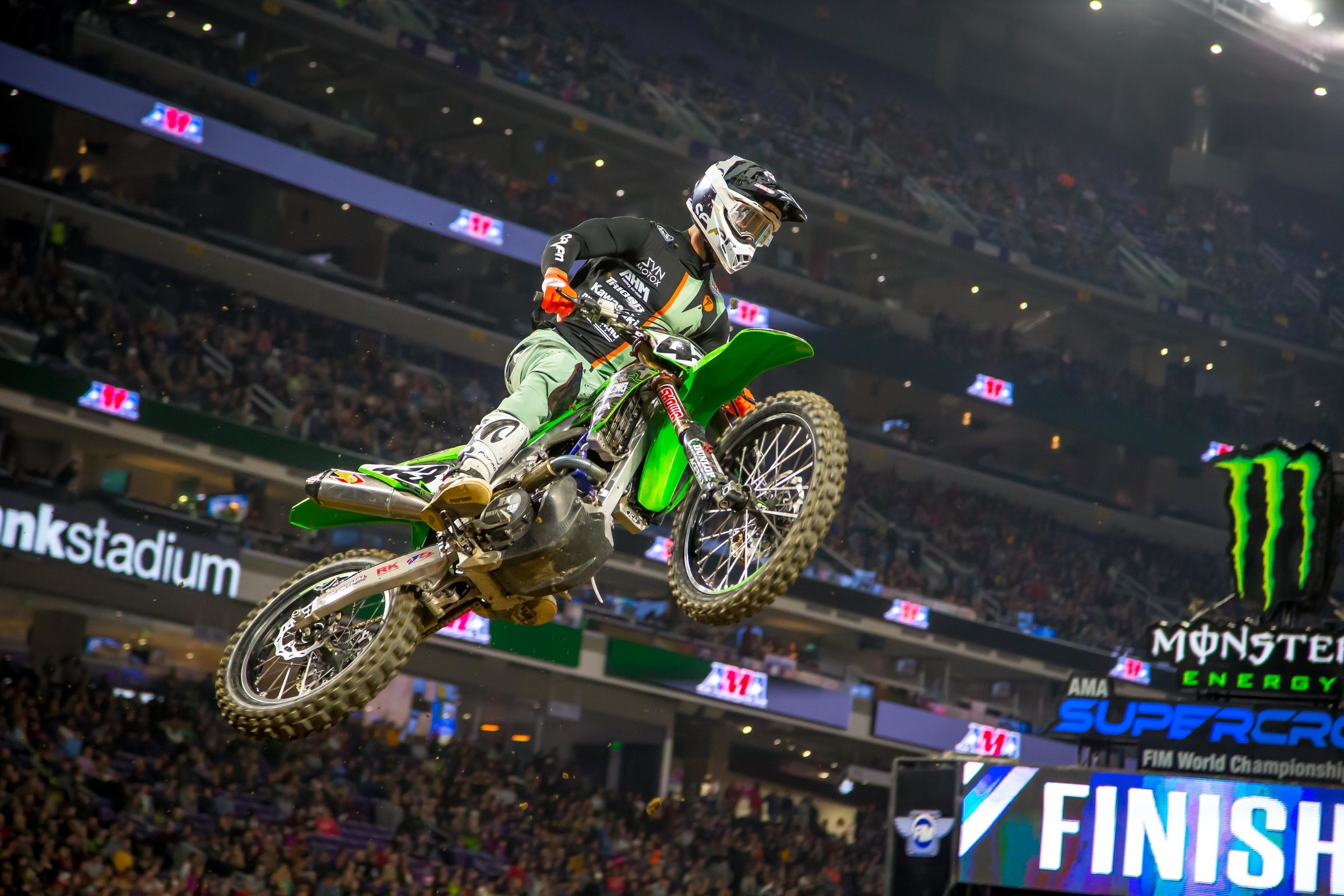 Tyler Bowers, the multi-time Amsoil Arenacross champion who currently races Monster Energy AMA Supercross as a 450SX privateer, was one of the more vocal riders after San Diego’s lime incident affected him like so many others. After this, Tyler began spearheading efforts to get the riders together with the promoters and AMA/FIM to discuss the proposed lime settlement and other issues. At the last two races, Bowers has gathered the riders on Saturday morning in hopes that it leads to more (and better) communication.

Well Bowers made it back into the news again in Arlington, but it wasn’t for anything good. In the 450SX heat race, Bowers made a super-aggressive pass on Monster Energy Factory Yamaha’s Justin Barcia and blew him off the track. It seemingly came out of nowhere, as both riders were in qualifying spots and both riders went down. Bowers, known as an aggressive rider for sure, didn’t seem to have a plan of making the pass stick.

“I’m just tired of laying down for this dude [Barcia],” Bowers told us Monday night on the PulpMX Show. “He tried to pass me on the outside and I was just being aggressive, just the way he is with me and everybody else. Unfortunately I guess I wasn’t as precise as he is about it and both of us went down. Coming off the last single too, you can’t really catch it on the camera. He tried to cover the inside really hard pretty quick and made it way worse than it was going to be. I was still going to make contact, but it just made it worse because I didn’t expect him to swerve so hard at the end.”

That was all the FIM’s John Gallagher needed to see, as he disqualified Bowers for the evening. In my opinion, there definitely needed to be some sort of punishment for Bowers because this pass wasn’t cool, but, we’ve seen this sort of action before and it hasn’t resulted in a DQ. Last gate pick for the LCQ, a fine, probation—these are all penalties that have been given out in the past.

Tyler Bowers isn’t happy about this out of nowhere penalty nor how it was communicated to him.

“It was emotionally charged by John Gallagher [of the FIM], as he always does. I don’t know why he’s still around. Emotionally charged, just like he yelled at me in the middle of the track on camera in front of thousands of people seconds after a heat race in Anaheim years ago. Just like he throws a black flag within seconds of an incident with Chad Reed and [Trey] Canard. When we had a conversation—they came down to get me in the tunnel right before the LCQ. I was sitting in staging watching the race and they came and got me. I was like, ‘Okay, whatever. Let’s go talk about this.’ [Thinking] I’m going to get penalized or something. I kind of get it.”

Bowers continues, “Mike Pelletier [from the AMA] and John Gallagher were there and John took it to another level. It was like personal. You [would have] thought I took out John on the track! I think he was more mad than Barcia probably was over the incident. John wouldn’t let me defend myself at all. Any time I tried to say something he interrupted me, yelling at me, to the point where Mike Pelletier kicked him out of the room. It was that bad. That’s how emotionally charged, this guy makes his decisions so quickly. It’s not right. If you’re a person in that position with that kind of power, you need to be able to be calm and collected and think and weigh these options, where Mike Pelletier was actually doing so.

“After we got John out of the room, Mike and I calmly talked about some things and came up with some ideas to maybe make the situation better for both of us. Barcia and I had never talked to each other since the Vegas incident, this and that. He avoids me, I avoid him. Let’s sit down and talk about this and get through it and put an end to it and move on.”

We attempted to contact Gallagher for a statement on what he saw to DQ Bowers but were unsuccessful. We also spoke to Mike Pelletier at the AMA and he says he plans to talk to Bowers more this weekend first, and until then he doesn’t have additional info to add.

You might have noticed that Bowers refers to the “Vegas incident.” That was a pass by Barcia at the 2018 Monster Energy AMA Supercross finale on Bowers that left Tyler with a broken lower leg. Perhaps Gallagher thought it was revenge from that, or maybe Bowers did something after the race that was out of line. Surely something like that must’ve occurred because this DQ seems excessive. Bowers denies both of these claims and even says he’s been around Barcia at the previous six rounds and hasn’t done a thing. And here’s the thing, even if it WAS retaliation for getting his leg broken, no one can really prove it unless there’s some sort of smoking gun we don’t know about. Bowers wasn’t on probation, he hadn’t received a written warning, and so to escalate from nothing going on to a DQ was a bit extreme.

“I don’t disagree that I should get a penalty, and maybe it was a little bit over the top. But there needs to be a standard and it needs to be across the board,” Bowers said. Not long after Bowers’ pass attempt on Barcia, Mitchell Oldenburg made a similar move in the same corner on Alex Martin in the 250SX East Region main event. He didn’t receive a penalty.

Bowers said: “There are times, like Oldenburg’s thing may not have been as bad but it still kind of happened similarly and maybe there’s a different level of that. If mine’s disqualification, Oldenburg should at least get some points taken away or something. You know what I mean?”

SWIPE for the full story. It was too long to post in caption

Since Bowers is trying to get the riders a voice with his Saturday morning meetings, some wondered if the DQ was some sort of message to him for doing so.

“I think everybody’s really confused on what’s going on with those [meetings],” Bowers said. “It’s super positive. Everybody’s happy there. We’re making some progress. We even decided we’re going to use lime again in the next couple races. In Detroit we will use lime in the soil again. Everybody agreed on it. It’s going to be good. There’s times it can be good. It’s great for everybody. There’s some privateers that have questions about media day stuff, so that got explained by Sean Brennan, the media coordinator at Feld Entertainment. It’s awesome.

“So I think those meetings, I’m still going to have it, and it’s going to be one of my bullet points, clearly, along with other things. We’re going to talk it out. We might not agree, but at the end of it we’ll kind of have a better understanding of each other as riders and the sanctioning bodies and the promoter. So I think it’s better no matter what. I don’t think it [the DQ] has anything to do with that. It’s not a union to protest and ruffle all these feathers and cause a stir and this and that. It’s good. It’s positive.”

Again, the pass was out of line but the disqualification by the FIM is yet another in a long line of harsh and inconsistent penalties handed out. We’ll see going forward if we can find out why this was dished out to Bowers, but in the meantime, Tyler is probably hoping he can stay out of the news for a while!