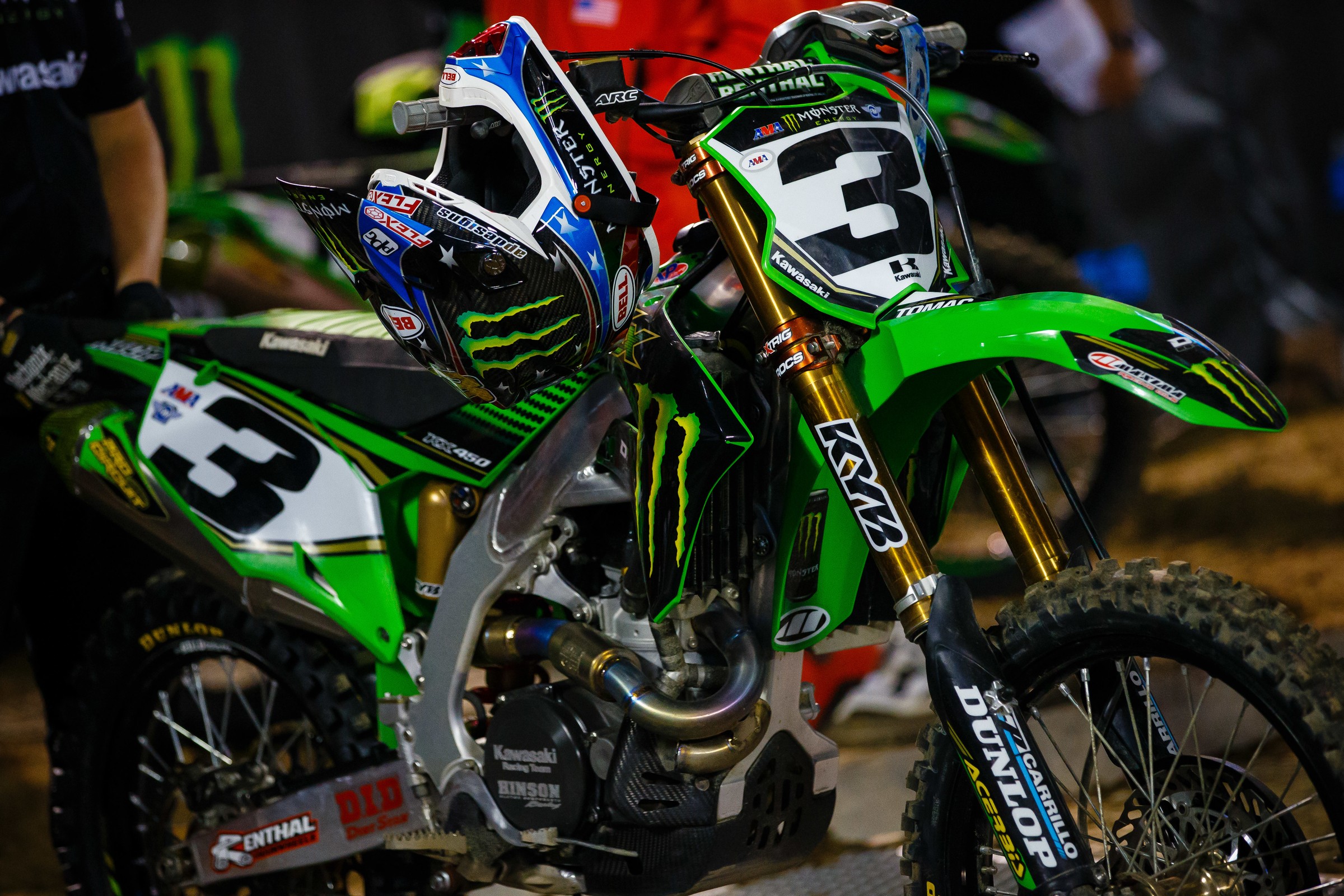 Racing always has its ups and downs, but if I can think of one brand that is usually the most level performer in AMA Supercross and Motocross, it’s Kawasaki. I know, I know, for some reason Kawi isn’t revered like “The Mighty Team Honda” of the Red Rider glory days, or the KTM/Husky group that now turns things into gold (Cooper Webb? Hello!). But those brands can speak of tough times, too. Honda’s efforts to win another premiere-class title seem cursed, and we all know KTM’s success is a relatively recent phenomenon. Yamaha and Suzuki? When they’re hot they’re very hot, but they’ve gone through plenty of lean times, too.

But Kawasaki has been solid for a long time. Just follow along from Jeff Ward through Kiedrowski/LaRocco, Emig, Carmichael, Stewart, Villopoto, and Tomac (only bad year was 2015, the Millsaps year that really didn’t work out). That’s just the big class, too. In the 125/250F division, Kawasaki has utilized the Pro Circuit operation since 1993. So, yeah, that’s worked out pretty well.

As expected, the green group finds itself in the thick of all three championship battles in Monster Energy AMA Supercross this year. It’s been a dynamic run, though. Here are some thoughts:

Early in the 250F era, Pro Circuit had a massive edge in both performance and the resulting race wins and titles. It was impossible for PC Kawi to maintain this edge forever. Mitch Payton spent big bucks to get ahead of the curve back in ’05, but competition kept learning, and a decade later the field was jammed full of other fast 250Fs. Meanwhile, other teams took a steroidal approach Team Green’s old model of grooming fast amateurs into pros. They made huge pushes to get and groom young talent, spending more money to get more talent earlier and faster. Kawasaki had to re-strategize (read: sign amateurs to bigger contracts earlier so they don’t get away). It’s working, because Cianciarulo and Forkner were both Team Green hotshot prospects that didn’t get away, and now they’re potential pro champions.

None of this will really matter unless these guys hang on, though. PC has had some down years, but lately some killer rider lineups. And yet, Justin Hill’s 250SX West Region crown from 2017 is PC’s only title since Blake Baggett’s 2012 250 Lucas Oil AMA Pro Motocross Championship. One title in seven years!

Pro Circuit is looking good now, but the team has witnessed defeat snagged from the jaws of victory too many times. Like Joey Savatgy leading the 250SX East Region points until the last two turns of 2017. Or the entire team dominating the 2014 250SX East Region only for all three riders (Cianciarulo, Baggett, Martin Davalos) to get hurt. Crazy stuff has happened and we’ve got a long way to go.

Turning the AC on

You could probably use Cianciarulo to sum up a lot of Pro Circuit’s recent fortunes. Every time the dude gets on a roll, he rolls right into trouble. After he won his the first supercross he ever entered in 2014, no one, NO ONE figured he’d still be trying to get his first pro title five years later. It’s been tough on the guy. He’s crashed so many times that he’s proven both fragile and tough. Adam took on a lot of injuries for a long time, but we’ve also seen the dude hit the ground very hard and get back up. When you have this large of a crash data bank, pretty much any conclusion is possible.

If he does hold on to win this title, this time, here’s the moment you can go back to and remember forever:

As this was happening, the world was waiting for Adam to throw it away. Look back on a triple and manual through the whoops? He held on, and he’s actually been rock solid since. Interesting.

Forkner in the Road

You want unpredictable? We’ve seen two Austin Forkner’s at the races so far this year. The daytime Austin Forkner is scary fast and also just plain scary. He has four practice crashes in two weeks. Forkner, also, was fast but too wild last year, too, so this seems like a pattern.

In the night shows, he’s been the model of solidity, never putting a wheel wrong. Further, in Arlington he didn’t even win with speed, as both Chase Sexton and Jordon Smith tried to get a hook in him and closed the gap, but they crashed while Forkner didn’t. Obviously, it was Kawasaki’s original vision to have Cianciarulo and Forkner hanging number-ones on the doors of the team semi, which reads like a mini Hall of Fame for this sport. Might it finally happen?

Speaking of one of those Pro Circuit title heartbreaks, Savatgy hasn’t been the same since that shocking 2017 Las Vegas finale. His last two 250 seasons featured too many weird mistakes and crashes, and Joey, who used to be a pretty outgoing and funny character at the track, looked all serious and depressed. Heck, even when he won races he didn’t even seem happy!

There’s something to be said for accountability and looking in the mirror, and it’s cool that Joey never made excuses when he messed up. But still, was this dude having any fun?

Well, his mood probably didn’t brighten when Kawasaki announced his 2019 450 deal. Sounds great, yeah, but fans unloaded on the guy the minute it was announced. In general, any good rider without a ride is a hero (Dean Wilson!), and any factory rider who isn’t winning races gets blasted. But the venom the fans sent Joey’s way was next level. The fans had really, really turned on him.

Well, some great early-season 450 rides have turned the tide back around. Joey has done a lot right, from good starts, to clean riding, to consistent results. No drama, either. He’s exactly what a rookie 450 teammate for a superstar like Eli Tomac is supposed to be. Further, fans are starting to respect the efforts. Can anyone say he doesn’t deserve the ride now?

D’oh! This time it was finally working out! Eli Tomac, after years of big speed but too many errors to collect the 450 supercross title, had to play the consistency card early this year. He missed some off-season time, so he spent the early races working himself and his new 2019 KX450 into form. He wasn’t destroying the field, but he was salvaging good points. In many ways, this was all a blessing, because unlike previous years where Eli had to dig out of a huge early points hole, the consistency kept everyone in his sights. Then when he won in San Diego it made him look like a genius and everyone else look dumb. Oh, we had gotten all hyped up on new-fangled upset winners, but Eli was about to show everyone he was the boss….

Wait, what? We could chalk the lowly sixth in Minnesota up to a bad start on a track without options. As soon as he was in the lead in Arlington he was going to show everyone….

Wait, what? First Ken Roczen passed him straight up, and then Eli fell, and then Eli fell into the same hole that plagued his 2017 and 2018 supercross title attempts. His 16-point deficit doesn’t really matter. The way this field is, he could make up 16 points in three weeks (no one is guaranteed podium points right now. Stack up three wins and you’re right back in it). The bigger problem is what this means for his psyche going forward, and his perception from others. You know why riders keep injuries secret? Because they don’t want the competition to think they’re weak. When Eli throws out a ride like Arlington, it reminds his competitors that he’s still vulnerable at times. And you need those reminders against a guy who is capable of ridiculous speed and huge win streaks.

This season could be a banner one for the Monster Energy Kawasaki group. It could win all three supercross titles. Pro Circuit could return to its days of glory. Cianciarulo and Forkner could deliver on their promise. Savatgy could rebuild his rep. Tomac could finally lock in the one that got away.

Even for the steadiest brand out there, racing has lots of ups and downs, especially during one of the wildest seasons in recent memory.