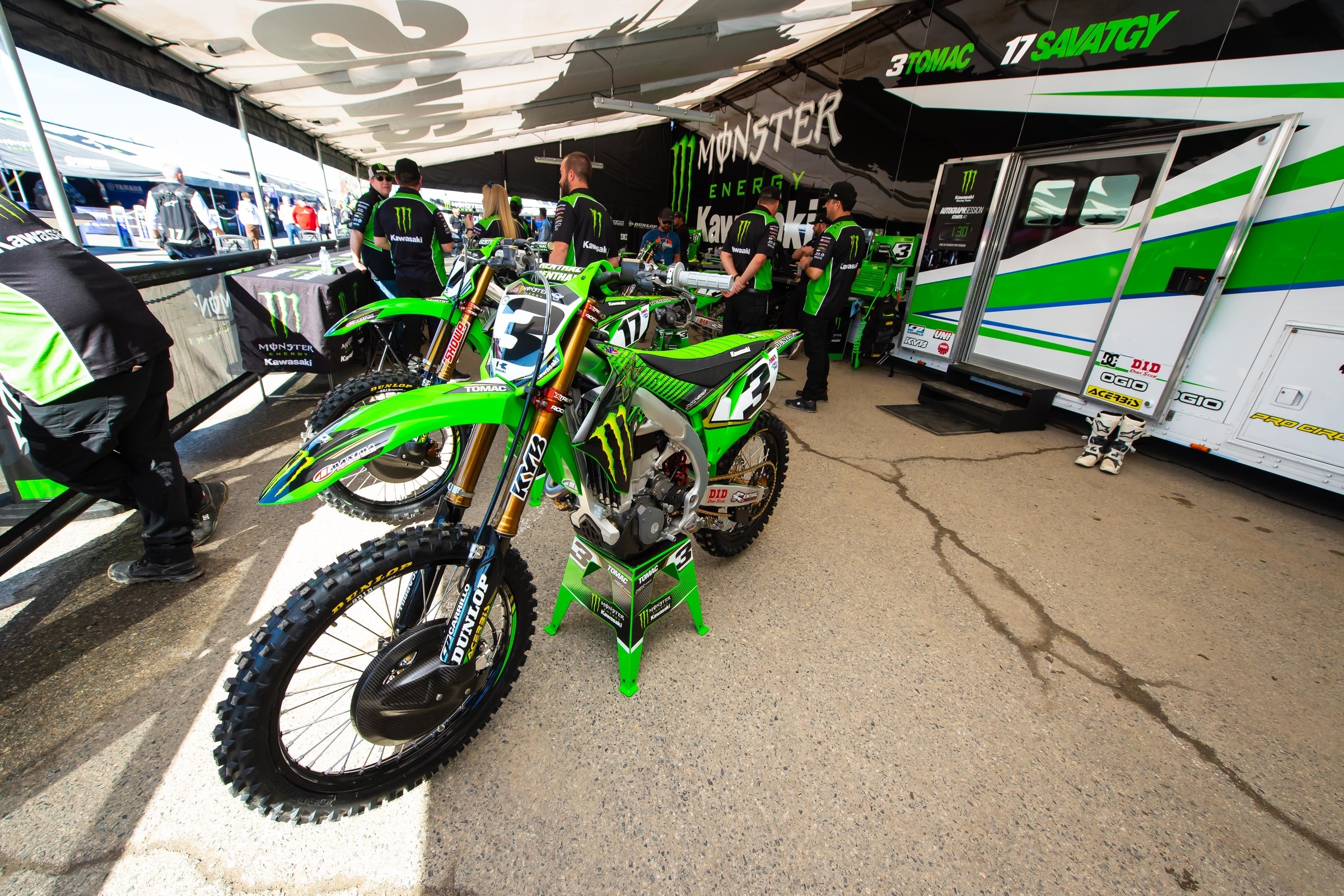 3 on 3 Triple Crown From the Pits

Round three at Anaheim 2 was the first of three Triple Crown events during Monster Energy AMA Supercross. The format was adjusted last year and heading into this season it was changed so that all three main events were the same length (check out the changes here).

1. What did you do between races?

Justin Brayton: We just went over some race footage real quick of what lines were good and bad, got a quick snack, and headed back up to the line.

RJ Hampshire: Honestly you don’t have much time between the races. By the time I got back, changed gear, and watched video of what went wrong on the starts, we pretty much had to start getting ready to go back down.

2. How did the track change from one race to the next?

Brayton: It didn’t change a huge amount other than the lines got deeper, especially in the rhythm lanes.

Hampshire: The track broke down big time from the first to the last main. The rhythms had ruts going all the way across the track by the third one and the whoops were so beat down the fast line turned into jumping them.

3. Did you feel different physically by the end?

Brayton: I was more sore on Sunday. The intensity of every race is pretty gnarly. And the races aren’t really that short either, I believe 14-15 laps. Imagine ten years ago telling the guys you have to do three 15 lap races when everyone was used to doing the standard 20 lapper? I’m good with it, though. I think it’s good!

Hampshire: I didn’t feel physically different by the end of the night. I felt more sore than normal on Sunday but that could have just been from the track. I was more mentally run down then physically. If the first two mains don’t go too well, then you get a bad start in the third main it dragged you down. It took a lot for me to come around and even get a fifth in the last main.

1. At the Triple Crown, in between the races, what are you doing to the bike?

Brian Kranz: Pretty much it’s business as usual. Obviously it’s tight for us. We do have the other bike if something goes wrong. I’ll give it a wipe down, change the clutch—it’s a million degrees—and a new tire. It’s tight for time. You get back from the race and start hauling ass; as I’m changing the tire, someone else is wiping it down. Do clutch and it’s time to roll back down for staging. If you were a privateer guy it would be tougher. Most of the guys aren’t doing clutches in between but with Eli, it’s not an option. We try to break in the clutch beforehand also.

2. Do you like the Triple Crown format in general?

Triple Crown is more stress for us mechanics. I know you media guys like them but teams don’t. It sucks. It’s basically doing three main events and the prep for each one. Plus you can easily make a mistake working on the bike. The second bike that is allowed for this year, for us it’s been stressful. With it being a new bike, we don’t have a ton of parts for everything. It’s still early in the year and if the time comes and we need it then great, I guess. But it’s a pain, finding room for it in the truck and carting it around for just two extra races. The bike itself, I’m sure other teams just used a practice bike but it’s a real deal bike, it was a photo shoot bike and then we just turned it into a race bike. Also, if it’s needed, I don’t think a rider doesn’t want to jump on a new bike that he hasn’t ridden all day. And Tomac doesn’t want to ride two bikes in practice to make sure it’s good, that just messes with a rider’s mind I think.

3. What do you think of Eli’s season so far?

The big picture, it’s been great. I think our finishes could have been a bit better but we’re two points behind for the title and it’s the best start we’ve ever had. We’ll just build on it and he’ll get better as the season ends. We’ve won half the races the last two years and don’t have a title to back it up so they don’t mean anything. This year it’s a bit of a different approach and letting the racing come to him. I think once we get that first win, they’ll all fall into place.