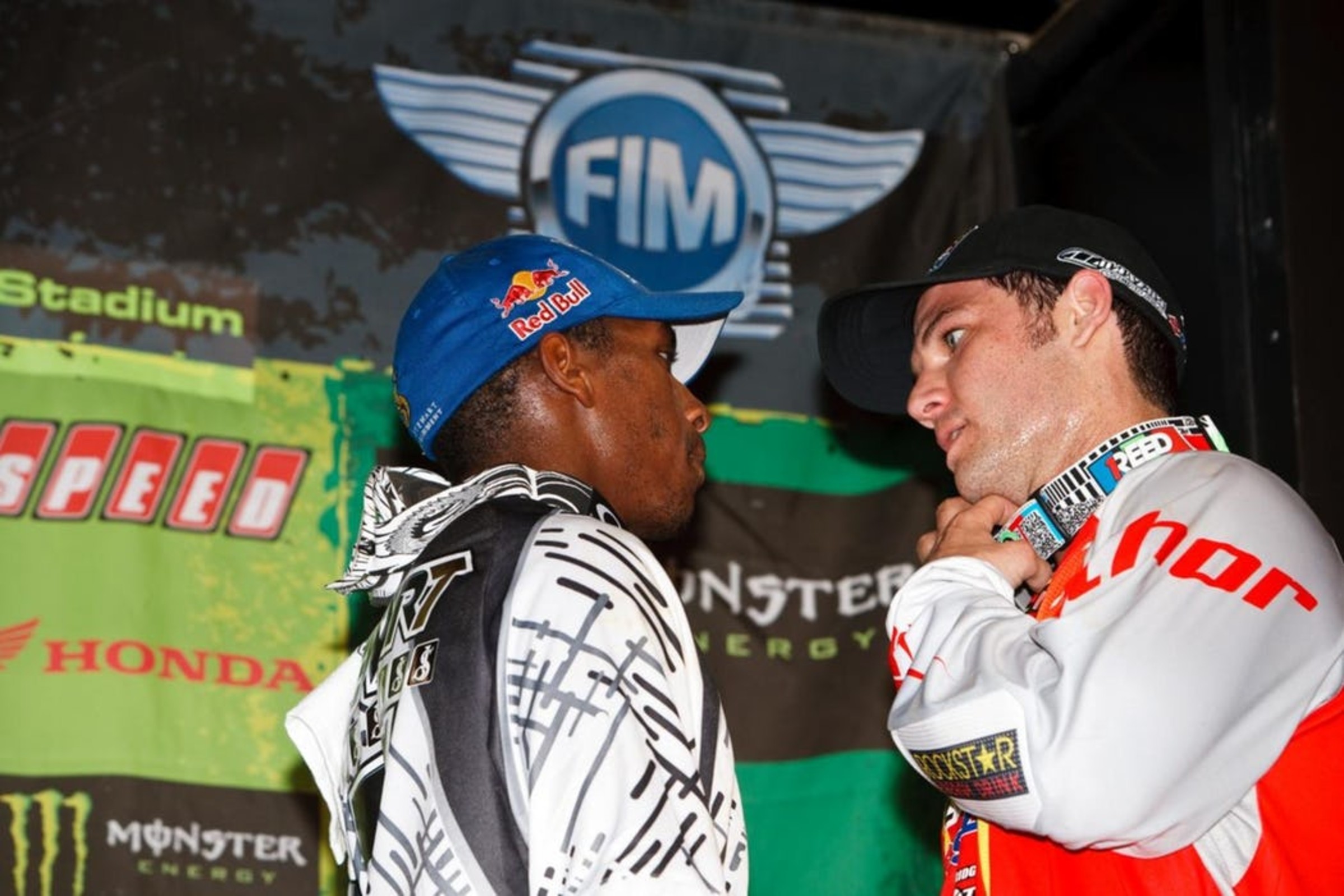 It is over. The Christmas that kept on giving has finally given up. Because we can’t put a closed sign on a website even on Christmas day, we built a holiday tradition around James Stewart and Chad Reed. Each year, we’d write some prose about them, ask you to share your own stories in the comment section, then shut the website down and call it a day. Easy content to get back to our own holiday parties.

For a long time, it worked. We wrote about these two in 2012, 2013, 2014, 2015, 2016 and 2017. The story remained fresh for a while, as James and Chad cycled through each stage of their careers. Sometimes they were contenders, the next year complete mysteries, then back with a vengeance again, and so on.

But now it’s gone. Last year contained only the slightest chance of a Reed/Stew go around, with Reed dragging his injured ankle into Anaheim 1 starting line on a privateer Husqvarna, and Stewart being completely unheard of, besides his dad asking the AMA to save his career number seven. James won’t say he’s retired but he damn sure appears to be. His number seven has moved on, also. The next step will be the AMA Hall of Fame voters trying to figure out when he actually “retired” and when he becomes eligible for the Hall. And then, will he show up?

With this, the greatest rivalry this sport (inarguably) will ever see is now complete. It’s time to move on, and most fans have. In the latter years of our Christmas postings, comments shifted from bench-racing tales of Stew/Reed to folks asking us to write more about the current contenders. (We do, just not on Christmas.)

We’ll never have a rivalry this universal. Maybe Tomac and Roczen are rivals, but they’ve gone through huge breaks and each hasn’t won the 450SX Championship yet. They never have on-track dust ups, and without that you don’t get heated quotes, jabs from fans and man-friends, and then more heat. Maybe Musquin and Tomac built something last year after that Foxborough tangle, but their careers will never be defined by each other. James was battling Chad at 16 years old.

Ryan Dungey and Ryan Villopoto ran a longer span of dominance on paper, (eight-straight 450SX titles shared between them, Stew/Reed have only four total), but The Ryans never became a soap opera. Further, they retired on top. We never got the back half of their careers to re-stoke an old flame. Stew/Reed would pop back up and just unearth all the memories again. Right now, careers are too short, riders are too careful. James Stewart had the gumption and pedigree to accept that no one should be on his level. Chad Reed had the stubbornness to never accept that he wasn’t. It led to clashes unlike any other. Even their styles were perfectly opposed to create the perfect fork in the road for bench racing arguments. Stewart was as fast as fast could be, Reed was as consistent as consistent could be. What’s the better way to approach racing? It’s the oldest argument in motorsports.

(By the way, if you’re looking to ignore your family this Christmas, play this recent, amazing, and epic three-hour long Chad Reed podcast through your headphones. Australia’s Jase Macalpine grabbed Reed about a month ago and got great stuff on tons of topics, including, yes, the Stewart days).

So, when you’re looking for an evergreen tradition in motocross, this is the one. Reed keeps racing, and if this season is amazing for him maybe some of the scope changes. But barely. The Stew/Reed die is cast, nothing will really change, and on Christmas we gravitate toward things that are locked into place.

It’s one tradition we might have to stop, but that doesn’t mean we won’t miss it.