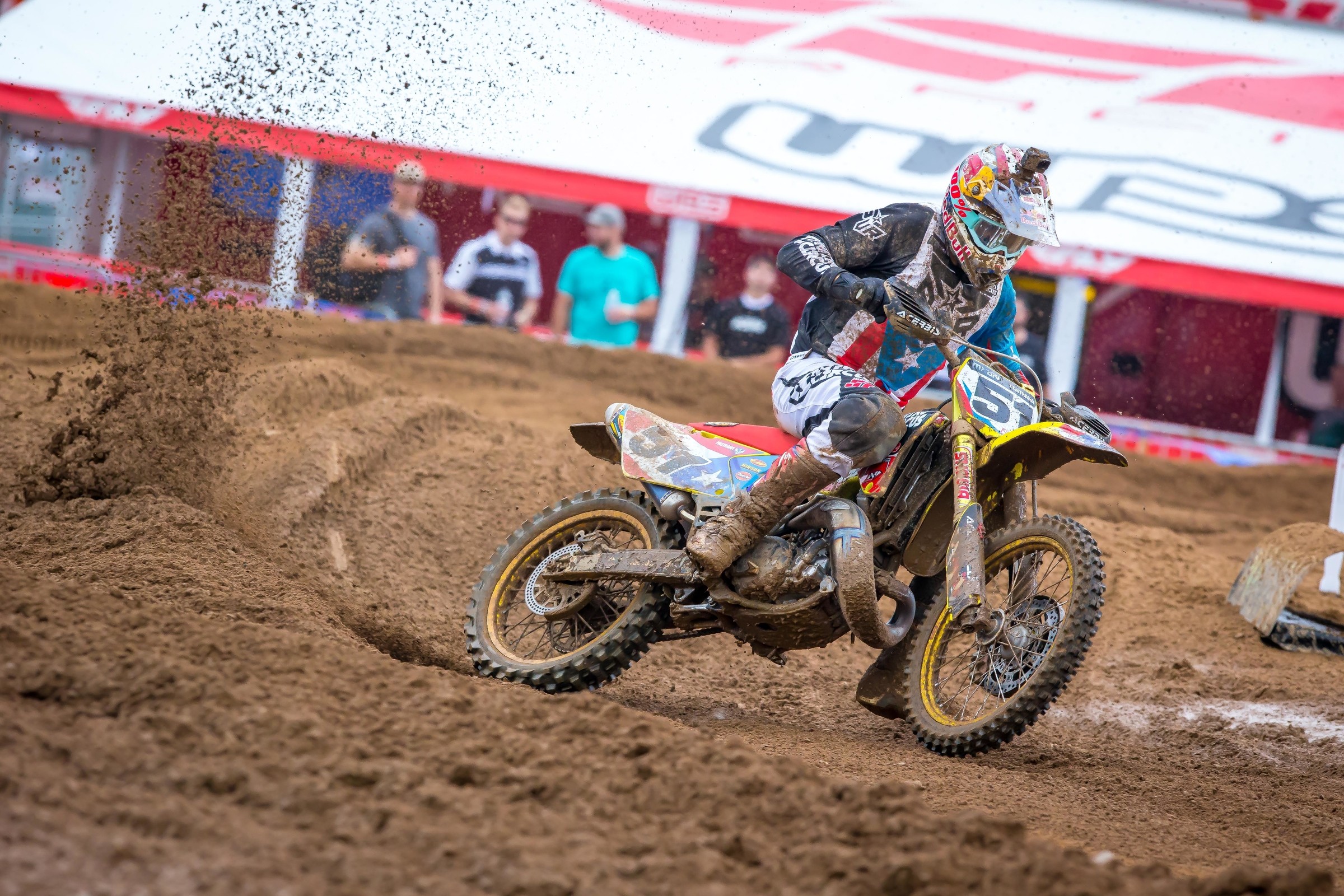 The saga of Team Puerto Rico at the 2018 Monster Energy FIM Motocross of Nations had many chapters, from the “wait is this for real?” announcement at the Unadilla National—with Ronnie Mac, Travis Pastrana, and Ryan Sipes named to the team—to Mac being replaced by Kevin Windham, to the team proving itself in the actual race by qualifying via an emotional B final triumph. Considering how much Team USA struggled through the weekend at RedBud, Team Puerto Rico’s very popular appearance served as a nice boost for American fans.

All along, though, the team stressed it was not solely about entertainment. This was an honest effort to help the people of Puerto Rico, who were battered by Hurricane Maria in September 2017.

The team raised a lot of money for the cause, and Pastrana and Sipes themselves are in Puerto Rico right now doing their part. We caught up with Travis on the phone last Thursday following their first day on the trip. Here’s an idea of what they’re doing.

Racer X: Hey, it’s Jason here from Racer X.
Travis Pastrana: What’s up! Hey, Ryan Sipes is in the back and he wants to say hi… wait, hold on a second. Sorry, we don’t know where we’re going right now, can I call you back in a minute? Okay wait, we can do it… I think we got this.

Honestly this is the perfect way to start an interview with you. Just figuring it out as it goes.
Perfect. Okay, so what’s up?

What are you doing? How’s it going down there?
Dude, cannot believe the support we have here. I mean, Greg Schnell [former 250SX race winner] is here.

Having some fun running dozers with @travispastrana in Puerto Rico. This track looks wicked fun but hasn’t been rideable since the hurricane a year and a half ago ☹️ #shame - We plan on restoring it to it’s full beauty??? #dozing #dirtwork #ilikeit #trackrescue

Greg Schnell? Why?
I don’t know! He’s with Global Disaster Outreach. He’s working his ass off with those guys. New Wave Construction came out, paid their own way, took time off of work, and then they came in before us and started putting all the money we raised with Motocross of Nations to work. We’ve had a lot of sponsors kick in, too. CDBMD, they were like “What do you need to do this at the top level?” We told them and they made the donation. So they had the groundwork all sorted by the time we got down here. Sipes and I got here yesterday, also Nate Wessel, he worked double hours, literally 18 hours a day the last two weeks at Woodward to get far enough ahead so he could get down here. Trevor Piranha is here, JT from Black Rifle, Lucas Oil, Ron Meredith, Dusty Wygle, Tarah Gieger is here. I can’t even list them all. At 7 a.m. this morning everyone was up, working, and ready to go.

Today, we were working on getting the main motocross track in Puerto Rico up and running. We replaced flagger stands, concreted and dug post holes for those. We rented some equipment so we could rebuild the track and put a ride day on over the weekend. They think a couple hundred people will come out, we’ll give away gear, we’ll hang out. Then today Ryan and I went to another motocross track and got in some dozers and worked that, while Trevor Piranha, Ron Meredith and some other guys stayed at the main track and worked on that.

Tomorrow we’ll go and actually put some roofs on some homes. Ryan and I will do that until the guys who actually know how to build houses step in. We’ve got a ton of stuff to give away like food and product to some lower income areas. We’re going to fix a school playground. So, three schools all got shut down, so everyone is now in this one school in this area that was hit really hard. It’s just a lot of kids there now, so we’re going to build them a nice playground. We’ll try to do the best we can with everything we do, but our goal is to add the fun back. They’ve got power and stuff like that here again, but we want to let people have fun again—rebuild the motocross tracks, do the playground. Tomorrow we’ll get to six or eight houses and help get roofs on them. We can’t make a huge difference but it will be good for those people living under tarps and stuff.

Day 1 for me in Puerto Rico. @trevorpiranha and @wesselbuilt are crushing it. The guys at @cbdmd.usa brought down a crew to work as did #Lucasoil .. The GDO crew and @new_wave_construction crews have already been down here for a few days on this project and they are putting in 12 hour days. Everyone volunteered their time. @r_sipes @rocket47s and I have been running the equipment and even @gregschnell63 @giegsey and @dustywygle showed up to help. Awesome to see this project coming full circle. #thankyou @nitrocircus @pit_viper @wienerschnitzel @gopro

How bad are things, damage wise, from what you’ve seen?
Oh jeez. Like I said, they started working on the track a couple of days ago so that was coming around, but the other track that Ryan and I went to, you couldn’t even tell it was a track! All the funds and equipment went elsewhere. Like I said, we’re going to get the fun back. The first thing to go is obviously going to be motorcycles, bicycles, the things we do. Entertainment.

But you’re going to really pick up a hammer and do some real work tomorrow?Oh yeah, everyone is going to do stuff. Because of the funds raised, that helps, and most of us have some sort of background in construction, I don’t even know why. Maybe if you ride motorcycles you basically have to know how to drive a bobcat or something. You’re just mechanically inclined. Dude, the track is awesome. It’s like trying to rebuild Washougal. It’s awesome and that’s important, but we’re trying to help do some other stuff too, with the houses and the school. So, huge thanks to the motorcycle community for coming together. This was so much bigger than we ever imagined. We have 45 people down here working! A lot of the guys are here 10 days, we’ll be here eight days. That’s where the funds went, and the more we talked about it the more people got on board.

The school is going to go nuts when you guys show up. They’re going to be so stoked!
Well, I hope so! The playground, it just doesn’t even exist right now. Hopefully we can help out with whatever else was can. We’ve got a certain amount budgeted for clothing, to food, to generators.

The conditions down here in Puerto Rico are rough but we are working hard to fix it! Today we are working on some houses that were damaged really bad during the hurricane. @newaveconstruction and #GlobalDisasterOutreach have been incredible and are handling all the construction. @cbdmd.usa also sent a crew down and have done so much to help. And of course @nitrocircus and @travispastrana are here making this a huge operation. I’m blown away. This is absolutely awesome and I’m proud to be a part of it????

9am in PR. @gregschnell63 and @newaveconstruction getting after it and already have a roof on our first house. Rad crew here.

As soon as this thing started, you guys said you were trying to help out Puerto Rico, but did you picture it going like this, or did you not know exactly that it would turn out like this.
Well, my goal, it actually started with Gabi [Gabriel Catala, Puerto Rico team manager] reached out to Ronnie Mac, and then they both reached out to me. I’ve known Gabi forever, back when they had Motocross of Nations at Budds Creek the guys stayed out my house. Anyway, that opening weekend at Unadilla, I know we got a lot of grief, but at the end of the day… we wrote a check on Wednesday, just from the money we raised, and thanks to Ronnie Mac, say what you will, the fact that he was attached to this at all helped so much, that we raised $16,000 by the Wednesday after that race. We did that just from merchandise! Not sponsorships and donations. Just merchandise that weekend. That guy knows how to do it. Even with Nitro Circus, maybe we get some grief for having Ronnie Mac there, but he shows up first and stays last and signs all the autographs, he gets the biggest cheer… anyway at the end of the day, we set that down, we raised the $16,000, and we were able to send riders from Puerto Rico to the Latin Motorcross of Nations. So that was cool and we felt like we had already done what we set out to do, which was help the motocross community. But if you were at des Nations, if you saw [Kevin] Windham and Sipes in that Last Chance Qualifier, the crowd and the response was awesome. So it just keeps going. This whole project has been awesome for me.

Well, you guys did take some flak when this team was announced. But eight days of work down there, and all of this money raised, that’s legit. No one can say this was some sort of gimmick or something, so good job.
Honestly, we were just trying to do what we could, and thanks to the motorcycle industry it’s been amazing.

What kind of response are you getting even after one day?
Yeah it’s been amazing. The construction guys told us about even the first houses they went to, and the response. We’re not going to be able to change the world but for the few people we are able to help, it does mean the world to them, so it’s pretty neat.