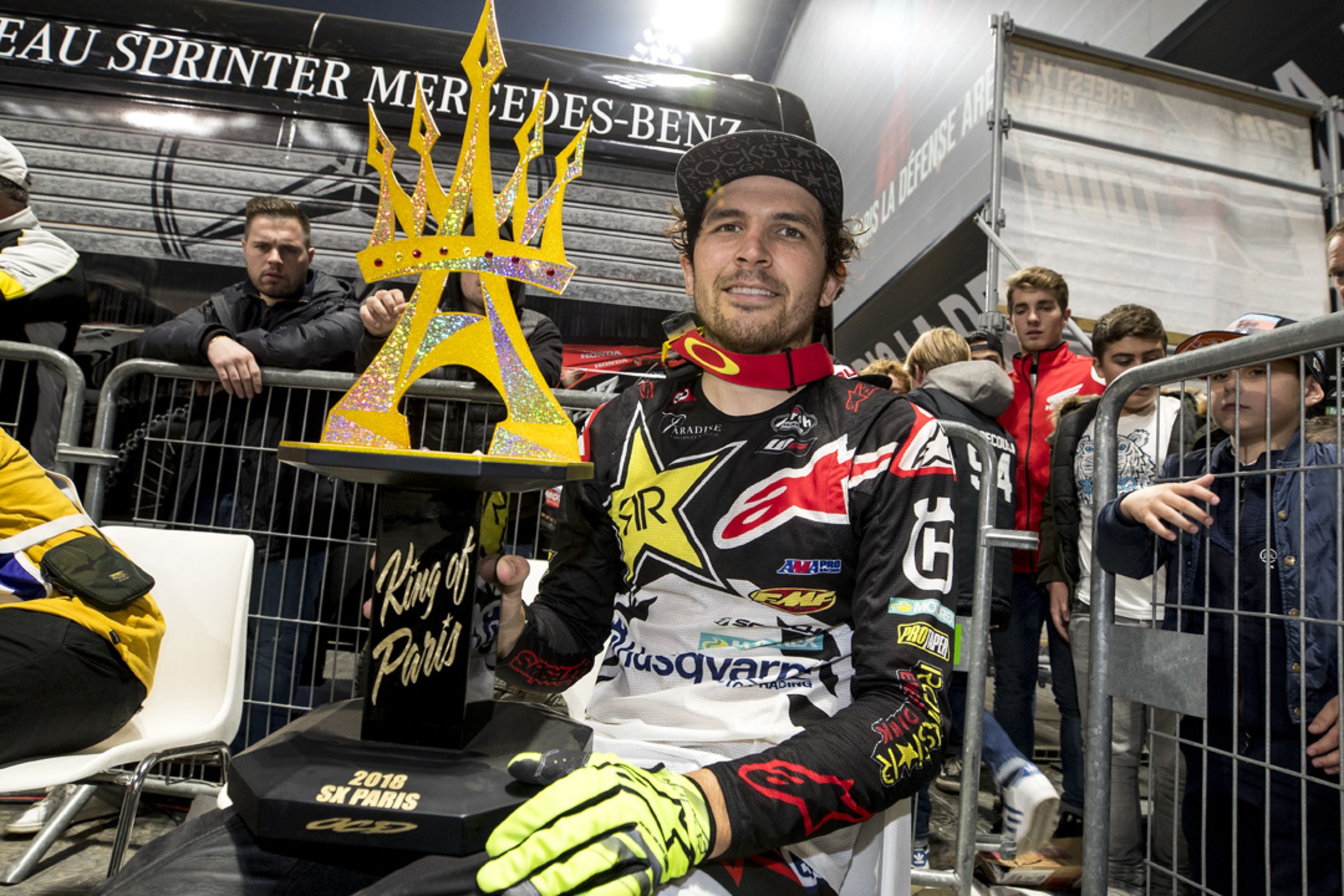 After winning the Monster Energy Supercross Championship in May, Jason Anderson has been a bit low profile due to a practice incident that ruined most of his Lucas Oil Pro Motocross season, and cost him a shot at appearing on Team USA at Motocross of Nations. He wasn’t even planning on racing Monster Energy Cup, but a last-minute decision to show up and race turned into a second-place overall performance.

He was really on the gas for his next two off-season races though. Last weekend, he won the AUX-X Open in Sydney, Australia, and this weekend he won the Paris Supercross in France. The champ is definitely back on the map!

Lewis Phillips of MXVice.com caught up to Anderson after his French victory.

You can listen to all of the MXVice.com post-race podcasts from Paris, including this one, as audio, here.

Racer X: You won in Australia a week ago, and here you are in Paris and you win again. So I guess that’s what you came here to do?
Jason Anderson: Yeah it’s been a world tour! We’ve been making it happen at all the races, and was able to get the win in both. Good times and close racing. It’s been crazy.

Can you compare the two events at all?
They all have the three moto format deal going on, but I will say here we did a lot more racing and we had to do it two days in a row. Australia was pretty good, but it was only one day. Here you get worn out doing the two-day deal. It was good, both of them, the tracks were awesome. Similar to what we race on. Maybe a little bit tighter in Australia, maybe a bit bigger here, so you get the best of both worlds. Kind of helps us prepare for our season.

Some riders have complained that it’s almost too much track time, actually. Did you feel like it was getting to that point?
I didn’t get too tired. I was on the verge of getting worn out that last moto, but, I could see how if you’re not prepared for it, it could be a tall order. For me, I’ve been in so many time zones and all that, but I guess I’m more jet lagged than anything.

You won the races and that all went well. Practice, it wasn’t a nightmare but it didn’t go as well as the races. Just talk about that process and what you figured out before the night show.
Yeah, the first practice I was losing my mind. I was going off the wrong jump—I thought the finish was off the other jump, so that was bad. This morning I didn’t care too much, I just did two fast laps, I just wanted to get into the Superpole deal. I got third, and there’s no doubting Justin Hill and Ferrandis’ speed, they’re going to be fast. But when it came to the races I was ready to go.

Was there any point in the practices where you kind of freaked out a little bit, or did you think you had the situation under control?
Normally, I don’t freak out over practice, if I’m like fourth or fifth or tenth or something, I’m good, but I was like 19th! I thought I was going pretty fast so I couldn’t figure out what was happening. But I was going off of the wrong jump, so that was my mistake.

A lot of guys were doing the same things out there. I felt like the end of the whoops was your spot, but then you passed Brayton at the end of this rhythm each time, so I guess that was a good spot for you, too.
I felt like I had pretty good speed everywhere. As far as the rhythm section and the whoops, there’s really no other spot to make enough speed to pass. I feel like just maintaining momentum all the way around the track was key. I feel like I was able to do that, but when I needed a little spurt of speed I think that rhythm section and the whoops helped me.

Anything you learned from this race? Any breakthroughs with testing?
Uh, yeah, I actually feel like my bike is pretty good. I came into here and there were a couple sets of forks that I was undecided about. The ones I’m on right now, they feel really good on the hard pack. We’ll get some time on the softer dirt in Florida and see how it works there.

This has been good for you. Obviously you’re tired, but you actually learned something. So it’s been worth it.
Yeah you can learn a lot from racing. I think you just get better. Your speed, your race craft, how to manage a race. It’s just good to race all these different events, even if they’re different formats or whatever.