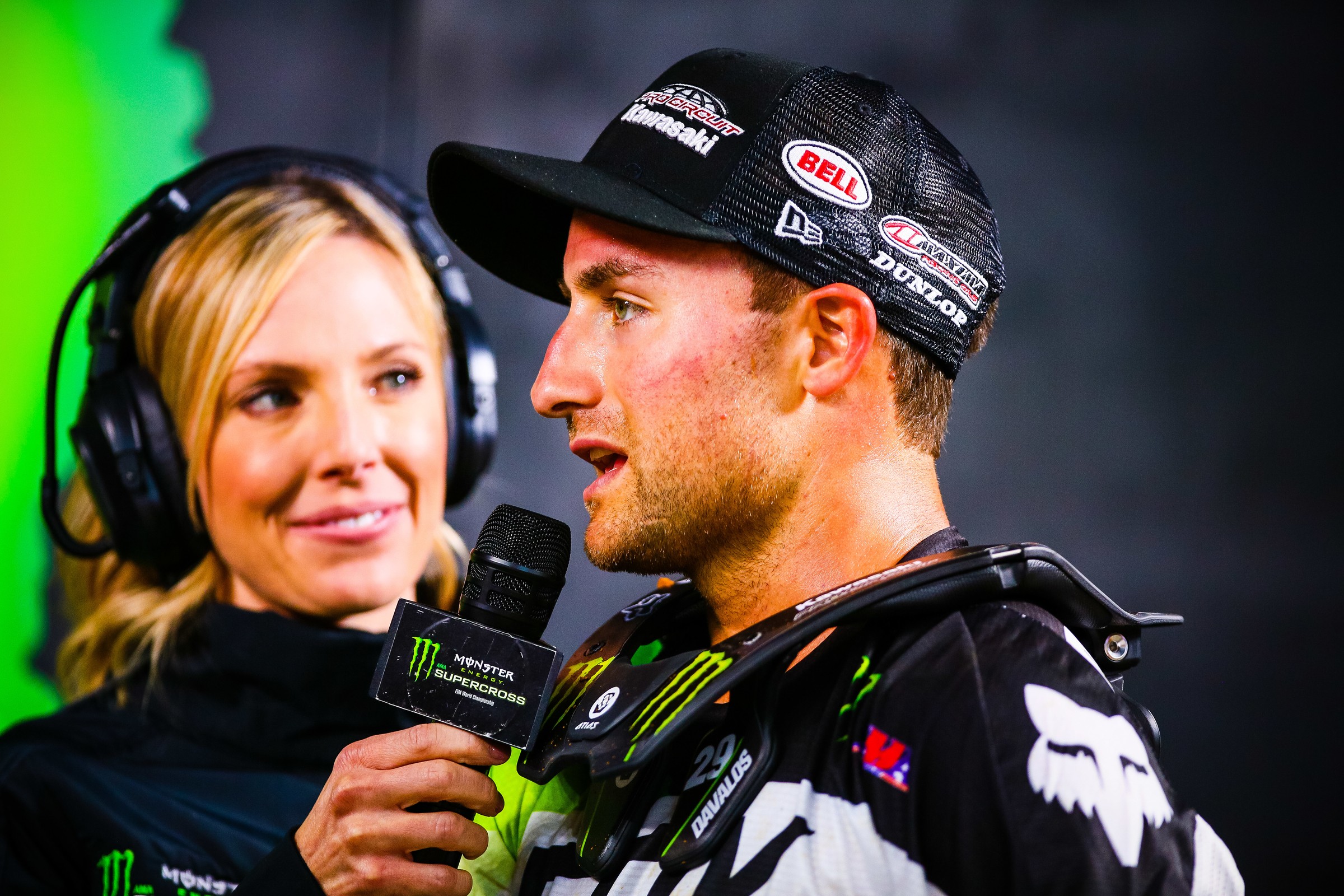 After a three year run with Rockstar Energy Husqvarna—highlighted by an impressive run aboard the FC450 during the 2017 Lucas Oil Pro Motocross Championship—Martin Davalos returned to the Monster Energy/Pro Circuit Kawasaki 250cc fold for the 2018 race season. While Davalos wanted to continue racing a 450, offers never materialized, and racing a 250cc bike for Mitch Payton again in ’18 not only provided him with a job, but also presented him with an opportunity to fulfill his lifelong dream of being an AMA 250cc champion. As racing fate would have it, St. Louis in February of 2006 marked Davalos’ first AMA race in this nation, while St Louis in the March of 2018, a race he did not even finish, marked his last (thus far). By then, Davalos season had fallen apart, and after fighting through injuries, he finally called it a year and focused on recovery.

Nonetheless, both Payton and Davalos have remained undaunted. Payton has brought Davalos back again for 2019. On what was a quiet afternoon in Tallahassee, Florida—Davalos had just returned from buddy Joey Savatgy’s recent wedding in New Orleans –we sat down with the ever-friendly, ever polite competitor.

Racer X: Martin, so to dive right into this thing, 2018 really amounted to something close to nothing for you, didn’t it?
Martin Davalos: Yeah, honestly, I would say that it was one toughest years that I’ve had. Coming into the 2018 season, I’ve never felt so prepared. I was coming from a 450 outdoor season where I did pretty well, and then I tore my ACL with one round to go. Not long after that I talked with Mitch Payton and we agreed to give it a shot for 2018. I let it heal and gave it some time. So coming into the West Coast, I told Mitch, “I like to be ready.” I’m a little bit older now, so it takes me a little longer to get ready. Once I’m ready, I’m ready to go. Just mentally, I need to know that I’m ready.

Mitch gave me the opportunity to race the 250 East in 2018. I was coming in super-confident. I had a great off-season training with Timmy Ferry. The whole day at the opening round at Dallas this year was going absolutely perfect for me. I clocked the fastest time in qualifying, and I won my heat race. I was pretty close to the holeshot in the main event when someone decided to keep going straight in the first corner. I ended up with a concussion and couldn’t finish the race. Besides all that, I had a T7 fracture in my neck and my fingers kept going numb. I kept crashing. At that point I couldn’t handle it anymore. I was just crashing too much. This sport is dangerous as it is, as you well know, and it got to the point where I said to Mitch, “I can’t do this. I have to get healthy.” Mitch then said, “Go ahead. Fix your stuff.”

Mitch has been absolutely the best person to me. He always has been. Mitch has always believed in me. I like to ride for people who have believed in me. Unfortunately, I’ve had bad luck throughout the years. I’ve shown speed and have been close to the championship a few times, but I’ve never been able to keep it going. Once again, Mitch has believed in me. I’ll be honest with you right here: This past year, 2018, was going to be my last year of racing on the 250 regardless of what happened. Championship or no championship, it was going to be my last year no matter what. Even if I didn’t get a ride, I was going to retire. Coming out of the motocross season I had as a rookie on the 450 in 2017, I really thought that maybe some doors would open up for me. I had two podiums and I was thinking somebody was going to snatch me up and give me an opportunity, but I had to stay on the 250.

Last year ended up being a wash out with the injuries and such, right?
Two-thousand eighteen wasn’t even a year for me. I couldn’t give myself a fair chance, you know? Mitch Payton called me and said, “Are you willing to do it again in ’19?” I told I was. I told him I needed to have a healthy year. I wanted to give myself a chance, unlike the stupid thing that happened at the first round and that put me out for the full year. So, yeah, the spark came back to me and I’m as motivated as I’ve ever been.

Are you doing all of your testing and training for the approaching racing season back there in Tallahassee?
Yeah, it’s been a process, man. I had to take five months off for the recovery. A lot of people don’t really understand. I’m 31 now. It takes a lot of me to recover from injuries. I have to be smart with the type of training I’m doing now. I’m not a young kid anymore. My priority right now is that I’ve got to be able to put in my laps, but I also have to take a little time off to adjust to my schedule to help my body heal. It’s been good, but it’s been a slow process. I recently went to California and got the bike somewhat dialed-in. Last year’s bike was incredible, but we just fine-tuned this new one in a little bit more. I’m just trying to get in shape right now.

You correct me if I’m wrong here, Martin, but I just think you need a little bit of positive luck. Earlier in this conversation you spoke of bad luck and getting knocked down at Arlington, Texas, in what was the opening round of the AMA 250SX East Championship. I saw what happened to you there. That was straight-up bad luck, huh?
Yeah, a lot of people say that you make your own luck, and I agree with that, but there are a few times, and for whatever reason, you just happen to be there at the wrong time. I’ve walked into that space a few times. I hear what you are saying right now. Hopefully, I get a little bit of luck. In any sport there is also luck involved. Hopefully, in this 2019 racing year, I can perform to my best and just have a solid year with positive vibes around me. I just want to have a calm year and a positive year. There is nothing more that I want than to have that kind of year. I need a breakthrough year. I know there are only a few people that still believe in me. That’s all I need. This is a self-motivated sport. I don’t think there is anybody that can put you on the bike and make you ride. This is a self-motivated sport and I think I still have it in me, man. I still believe in myself and I think that is a huge part of this. If I didn’t believe in myself anymore, I don’t think I would have accepted this chance that Mitch has given to me.

West Region or East Region for 2019? Do you have a preference?
Well, I don’t have a preference. If you’re asking me, you have a little more time to do East Coast this year. But you know how Mitch is. He wants us to all be ready for it, so in my mind, I’ve got to get ready for West Coast. We’ll see. If he gives me a little more time for the East, great. If not, I think I’ll be ready regardless.

Man, this week is Thanksgiving week. Not a whole hell of a lot of time to be ready for Anaheim 1 come the first weekend in January. Are you all set?
It’s crazy because Thanksgiving is so close and the season is so close. And to be honest with you, it was a pretty crappy summer because I was rehabbing my knee. So I was sitting at home and trying to move around with my knee. This year has gone by so fast. October, November, and December is just crazy. It’s a habit that I have Thanksgiving here with my wife’s family. My wife is from Whigham, it’s a small, little town nearby Cairo, Georgia. Every year we do Thanksgiving at my mother-in-law’s house, but the hurricane came through the area pretty badly this and the yard got all messed up. We’re going to do Thanksgiving at our new house here in Tallahassee.

December is going to get busy. On December 3, I have to go to California and we’re going to be there for two weeks. I know everybody has team photo shoots and some engine testing and a little bit of tinkering with the bike here-and-there. I’ll come back to Tallahassee for another two and a half weeks to finalize any preparation and then I’ll wait for the call from Mitch. We’ll see.

How’s that lime green 250cc motorcycle? Are you pleased with it?
Yeah, the bike is awesome. The chassis hasn’t changed much from 2018 to 2019. They have a lot of suspension stuff that we already tested to improve the bike. I’m also aware that they’ve been working on some engine stuff that we’re going to test next month. I’m pretty happy with my bike. Everybody at Pro Circuit works so hard. They never sleep. They just try and make the bike better and better each time we ride it.

The 2019 season will mark your 13th year of racing in AMA Motocross and Supercross. Having said that, you sound real positive. You sound like, “Hey, let’s get 2019 going and see where we net out.” Thoughts?
Yes, I’m excited just to go racing again. I still love it. I really and truly still love it in my heart.