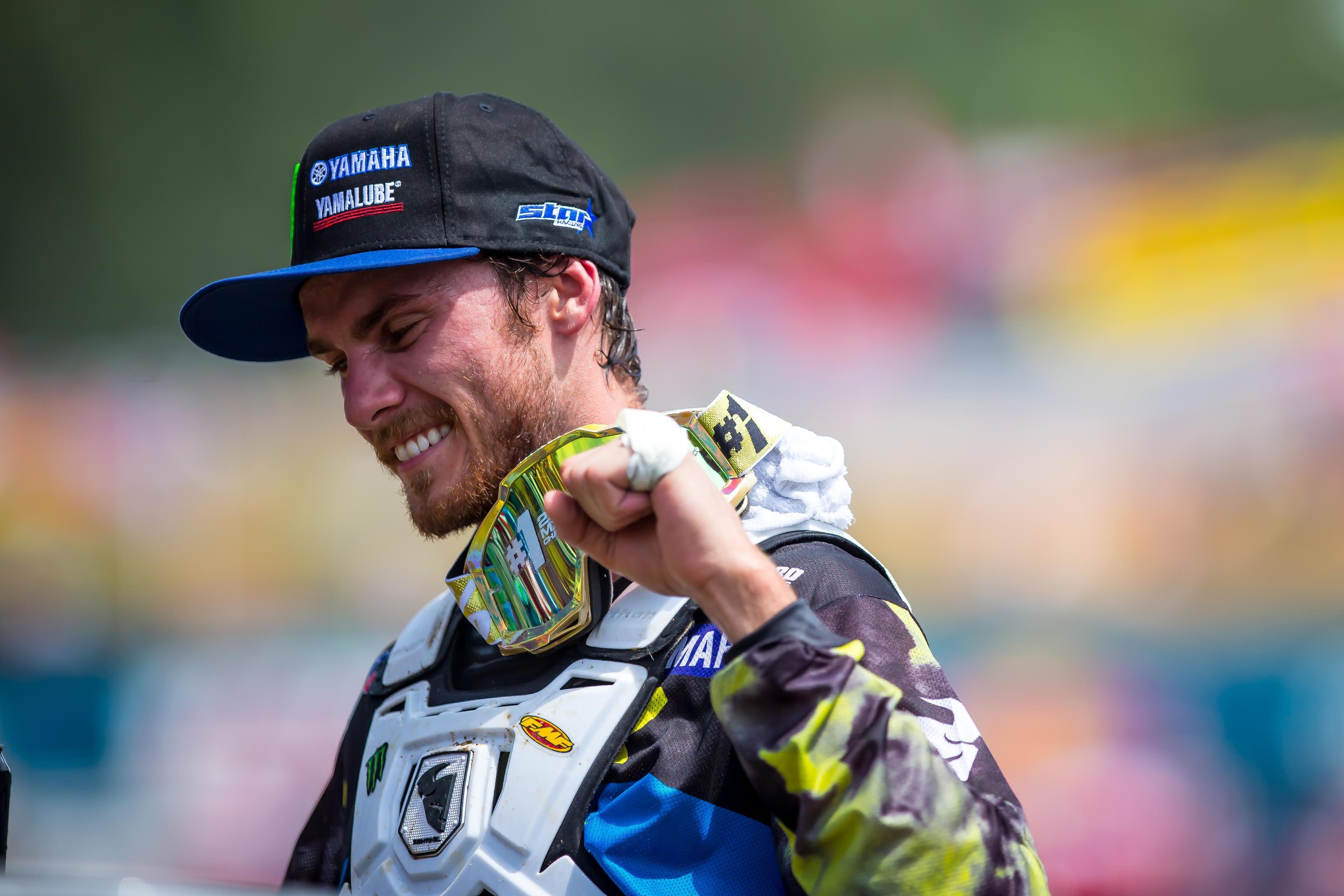 It’s not the winning that defines Aaron Plessinger’s season; it’s the way he has won, and we don’t just mean on the track. The numbers say Plessinger has joined a pantheon of great riders to deliver double 250 titles in one season—something done just last year by Zach Osborne and the year before by Cooper Webb. The accolades are the same, and obvious. Winning is great. Of course.

The breath of fresh air is in his personality. Each of these recent 250 warriors has had a distinct story to tell. Webb’s rise as pro was defined by his trash-talking edge and the mind games he played on his competitors. Webb stirred the drama up on purpose, knowing he functioned better in that environment than most. For Osborne, his 2017 championship season was one of redemption, having ridden all the way back from the career depths and doldrums to make it back home and finally deliver on his potential. Webb is the consummate warrior, Osborne the consummate grinder.

Plessinger appears to be neither of these things.

Plessinger is your buddy. He’s the guy you love to go riding with, love to hang out with, love to share a road trip with. Webb purposely stirred the pot while Osborne occasionally spilled it just by riding hard. Plessinger doesn’t go near it. Through his four full pro seasons, no one can remember a cross word emanating from Plessinger, or coming toward him. Everyone likes him! In the combustible world of the 250 class, combining such universal appeal with the aggression needed to win seems impossible.

But there’s Aaron, doing Aaron. He’s had an amazing year.

This started during the 2016 season, when Aaron and Malcolm Stewart were dueling for the 250SX East Region Championship, then outdoing each other with post-race dances. We honestly don’t even remember which riders won which races—they were often celebrating together anyway. The post-race dance started to become an AP staple.

Winning races is supposed to be stressful enough. Winning your first professional title goes beyond that. Yet Aaron juggled that with a pending proposal to his girlfriend, which he planned to do on the podium once he won a race this year. He had a buddy as the designated ring-holder, though, and it kept not working out. He won in Houston, Glendale, and Oakland, and yet the ring never showed. This pushed the question toward a bigger goal—could he do it while working on a championship? Indeed, the question had to wait until Las Vegas, and of course the answer was yes, because hey, now she was getting married to a champion!

Please mark down Aaron’s 2018 season the next time someone claims getting married or engaged or having children slows a rider down. There are many in Plessinger’s camp who say pending fatherhood pushed him to a higher level this year. Parents have responsibilities—and the more Aaron wins, the better he can provide for his family, straight-up. To win, you have to put in the work, and he was more focused than ever on doing that this year.

“I think she made me kick it in to gear when she told me she was pregnant,” he said after locking the 250 title at Budds Creek. “I went from wanting to win from needing to win, and that all leads here.”

Say hello to the world Jake! 11:22 am, July 30th 2018. So crazy he’s already here, and on his due date haha! All healthy and ready to rumble! @kendalltaylor12 is a trooper and made It happen quick ?

When Aaron won that 250SX title, he grabbed some crazy Viking helmet from the Monster Energy/Yamalube/Star Racing Yamaha truck driver and wore it to the press conference. Even wilder, the helmet showed up again at the nationals opener at Hangtown.

Laid-back Plessinger isn’t a mean mugger in post-race interviews. In fact, it appears he basically forgets he’ll have to even do a post-race interview until the moment strikes, and then suddenly hegoes into Ricky Bobby “I don’t know what to do with my hands” mode. Oh, and the sponsor roll never exactly rolls off the tongue. With Plessinger, you know you’re getting raw thoughts from right in the moment, because nothing seems planned. It leads to a few gems, like when he described his supercross championship as “outstandable” on the podium. We asked Aaron if we could make a shirt about this—with the Viking helmet as the image—and of course he said this was awesome, as long as he could get some freebies.

Plessinger’s father was a mudder. His dad, Scott, is a two-time Grand National Cross Country Champion, and old-school woodsmen some say that, in his prime, was the greatest mud rider in the world. Aaron gets it honest. His mud skills come from his dad, so on a rutted, messy track in Seattle, he dominated. How much of a mudder is he? When it was time to launch another post-race dance, he instead found a big puddle and leaped right into it!

Aaron barely gets stressed. When I saw him on Saturday morning before practice at Budds, he was chilling and fist-pumping and smiling just like any other weekend. Finally, during the sight lap, he said the moment almost started to overwhelm him, and he grew so nervous that he started getting chills. He managed to talk himself out of it by the time he got to the starting line. Moments later, he grabbed a holeshot and took off, the championship now looking like a certainty. He even pumped his fist while riding down the straight, just seconds into the race! He did the same on the last lap, screaming in the direction of his mechanic.

Why don’t any of Aaron’s competitors have beef with him? Because he doesn’t have a problem with them. When Aaron won Washougal with 4-3 moto scores, he praised the moto winners, Joey Savatgy and Shane McElrath, first, saying, “Those guys were on it today.” When his teammate Dylan Ferrandis outdueled him in the mud at Unadilla, he was there to high-five and fist pump him, even though he finished second. Later, he told third-place Mitchell Harrison that if he wanted to attend Motocross of Nations as a spectator, Aaron would rent a camper and let him crash in it. This is the same philosophy as dancing with Malcolm Stewart while they simultaneously battle for a championship. For Aaron, the more fun he has, the better he does.

“I just tried to have fun all year, not take it 100 percent serious and keep a smile on my face,” he explained. “Just try to keep it light and not put too much pressure on myself. I think that helped me get through this season the way I did.”