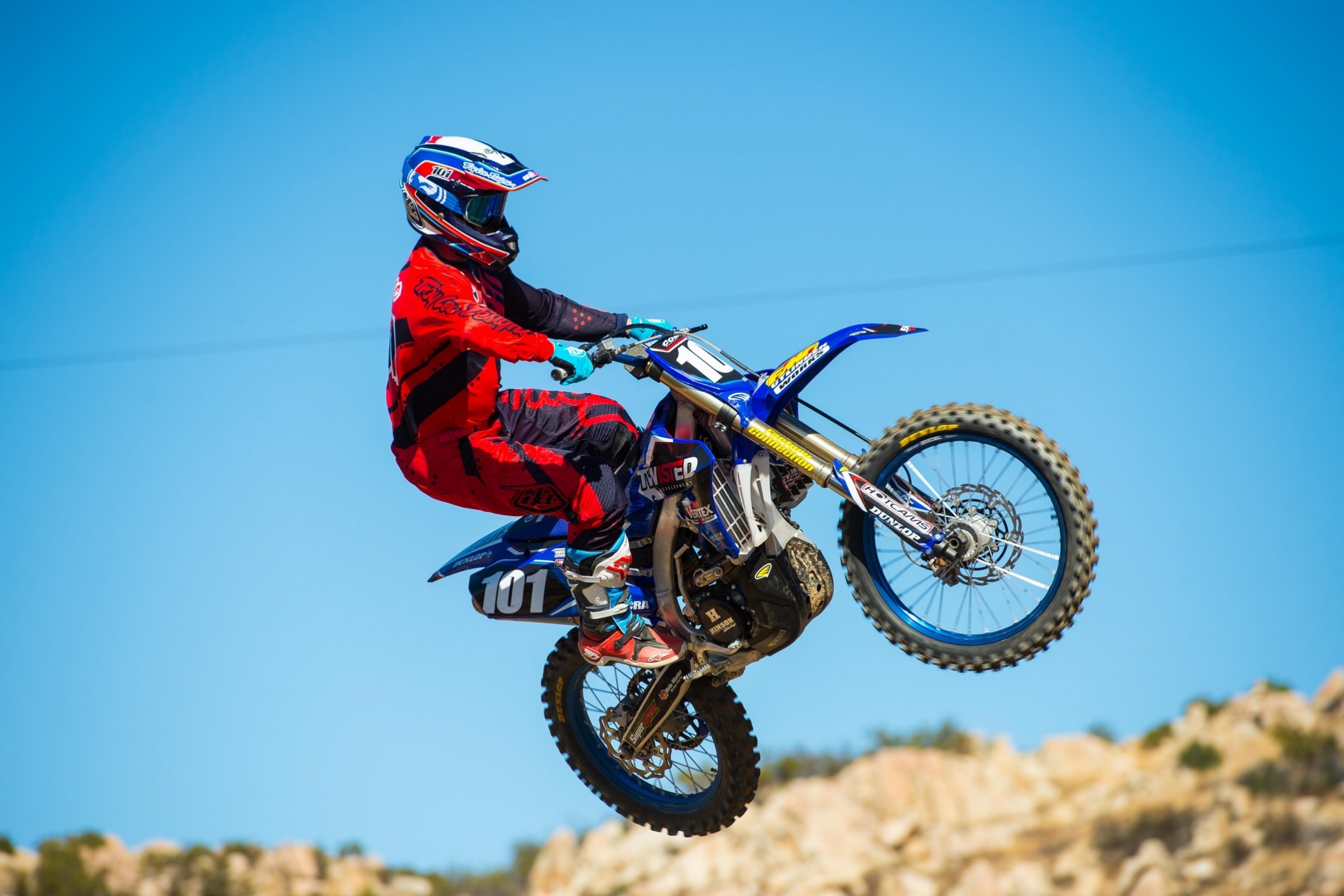 I heard that Anderson's front tire was not flat, but was just missing some spokes. If that was the case, is it so dangerous to ride with a couple of missing spokes? I realize there is a risk, but would the risk be worth the chance of wrapping up a championship?

Well, let’s weigh the options out here, shall we? With three spokes clanking around in his front wheel (keep in mind that he has no idea how many are broken at the time, he can just hear and feel them) what are the odds that it would make it through 20 laps on a supercross track? That’s over 40 big hits from the two triples alone, not to mention the whoops. I don’t think there’s any way it makes it through the whole race. And when it does finally let go, I’m sure it won’t be in a tight, slow turn, either. It would probably come unraveled on the landing of the biggest and fastest jump and send Jason soaring through the Salt Lake City sky like Eddie the Eagle on an Olympic ski jump. Except this landing is on dirt, and it’s probably face-first. After that ending, where he scores no points, he is lucky if he isn’t hurt and he goes to Vegas with an eight-point lead.

Instead of that blindingly ignorant scenario, he decided to pull in for a new wheel that he knows will last the whole race and then try to get back as many points as he can. It was another good decision in a season of wise choices for Jason Anderson. I think he gets it done this weekend, and his patience in Utah will be part of the reason.

Is it just me or does Jason Anderson look a lot like Muammer al-Gadaffi? Don’t get me wrong, I’m an Anderson fan and hope he holds his 14-point lead going into the last race so Husky could possibly win a championship in the premier class, but still....

Um, no. Gadaffi was an older man with middle eastern features and sunken eyes who looked nothing like Jason. Che Guevara, on the other hand, is Anderson’s doppelganger. The Marxist wingnut (who actually loved motorcycles, coincidentally) bears a resemblance to Anderson so striking you have to look twice to make sure you aren’t staring at “El Hombre” himself. What else do they share? Unless Jason decides to take his championship bonus and divide it up between all the riders in the series, not too much. And the chances of that happening are about as good as Anderson’s jersey staying tucked in for the entire main event on Saturday. Not happening.

I'm an old regional pro from the eighties and nineties and on my KX125s, I'd always tap the front break to lower the front wheel upon landing; these days I see most riders tapping the rear, and when I speak with younger riders (younger than 40), most have never even heard of tapping the front. They look at me like I'm some freak of the past when I suggest they try it.

Is tapping the rear a four-stroke thing? I still ride 125s and I tap the front.... Works good for me. Can't imagine having to pull the clutch and work my toe down to the rear pedal when I just use my index finger to scrub front wheel spin and bring the nose down.

What's your take on this?

I’m really at a loss for words here, pal. I’ve heard of trail-braking with your front brake through a turn to get your bike to stay settled, I’ve heard of holding your front brake on the starting gate, I’ve even heard of some guys dragging the front brake up the face of a steep jump to really scrub speed. But locking up your front wheel while you’re in the air is the most dangerous, uncontrolled maneuver I can possibly think of, short of shifting into neutral between jumps.

When the front wheel slows or locks, it throws the bike to one side or the other, depending on which way you’re leaning or turning the bars. If you aren’t flying perfectly straight, you better be ready for a direction change. It’s a terrible practice, and the first couple times I read through this I thought you were being sarcastic. But I think you’re either nuts or you’re British, or both. Either way, you are playing with fire and I suggest you stop.

I’ll ask you this: Have you ever seen a pro lock up his front wheel off a jump on purpose? No. There’s a reason for that, and don’t think you’ve discovered something that the best riders in the world haven’t. You’ve been warned.