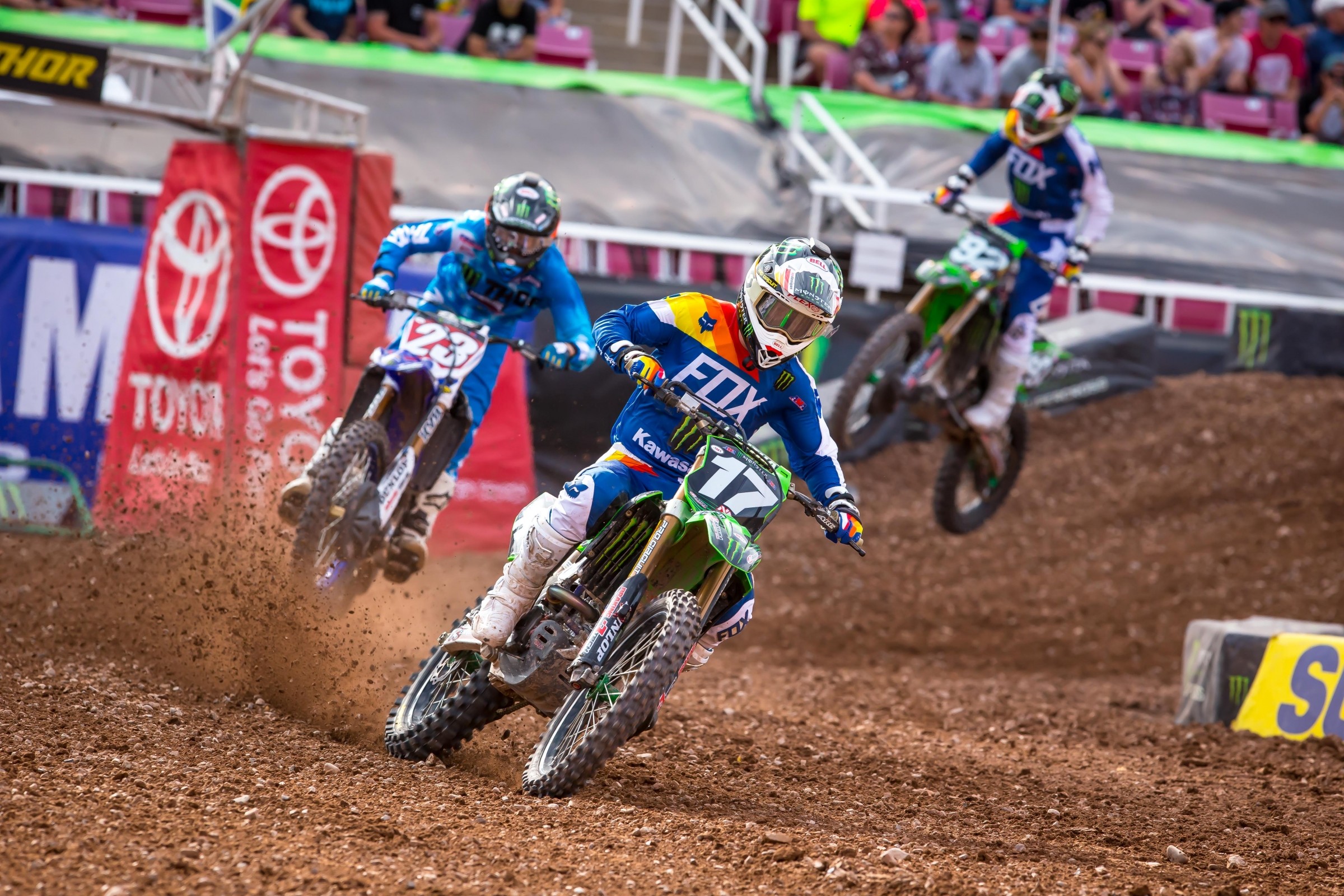 It sure looked like Jason Anderson was going to clinch his first 450SX Monster Energy Supercross Championship last weekend, but then the main event happened, he broke spokes, and ended up 17th. Marvin Musquin won, putting him 14 points back of Anderson. The current situation is a whole lot better for Musquin, but still unlikely to result in a championship for the friendly Frenchman. He’d have to win and have Anderson finish 11th or worse. Anderson could start in dead last and be up to tenth by the halfway point, so if you’re laying down any money in Vegas this weekend, put it on Anderson. —Aaron Hansel

Aaron Plessinger had an outside chance to clinch last week but didn’t—even if he’d won, Adam Cianciarulo finished high enough to stay alive. Plessinger still holds a 13-point lead over Cianciarulo, though, which means as long as he doesn’t give up 14 or more points to AC, he’ll take home the title. In even simpler math, if he gets tenth or better, he wins no matter what. That shouldn’t be a problem for Plessinger. Joey Savatgy (22 points back) and Shane McElrath (24 points back) both have remote chances, but they’d need Plessinger to basically DNF and hope Cianciarulo has problems. No matter how you look at it, Plessinger the favorite to take this thing home on Saturday night. —Hansel

With a 15-point lead over Jordon Smith and a 23-point lead over Jeremy Martin, Zach Osborne is looking good for another 250SX East Championship. His magic number? Twelve. As long as he’s 12th or better, he’s golden no matter what. If Smith wins and Osborne is 13th or worse, Smith wins the title. Martin still has a mathematical shot, but he’d need to win, have Osborne finish 21st or worse, and have Smith take fifth or worse. Osborne’s the obvious bet here. —Hansel

While most eyes will be focused on Jason Anderson in Vegas, there’s another points battle well worth keeping an eye on. Blake Baggett and Justin Brayton, who we actually wrote about last week, are now tied for fourth heading into the final race of the season. After Salt Lake City, Brayton told us he was happy to have locked up a top-five, but edging Baggett for fourth was still extremely important to him. You know the feeling is mutual for Baggett as well. We’ll see who comes out on top at the finale. —Hansel

We’ve already seen the 250SX East and 250SX West guys go at it once this season in Indianapolis, but with a couple of titles on the line and everyone wanting to end the season on a high note, this Showdown has the potential to be the nuttiest, most action-packed one yet. And with so many fast guys crammed into a single class, the potential is there for a shakeup in points, which could have an effect on both title scenarios. Buckle up, this one’s could get wild! —Hansel

Can AC Get On The Board?

Despite an average qualifying position of 4.6, leading 11 laps this season, an average finish of 3.7, and sitting second in points, Adam Cianciarulo has yet to capture a win in 2018. AC has six podium finishes in nine rounds, but those aren’t exactly making him happy. “I wasn’t too happy after Salt Lake, to be honest,” he told Racer X earlier this week. “I think sometimes after the races, even if it doesn’t go so well, when I go up on the podium I try to represent myself and my sponsors the best way I can, and that’s definitely not by letting all your emotions show and being overly sad or mad or any of those emotions. For me, there have been a bunch of races this year where I’ve been close to winning, but I haven’t won.” AC won Vegas a year ago and nearly came away with an unlikely title. Can he repeat? —Chase Stallo

Hey, Jeremy Martin is good at supercross! Who knew? Kidding. Speed has never been in issue for Martin indoors. Prior to this season, Martin had four wins in his career. That doesn’t happen by accident. The knock on Martin has always been consistency. He’s had strange races, too, where he didn’t even qualify. This year has been different. He’s finished inside the top five in seven of eight rounds and has two wins. He was super-fast last time we saw him in Foxborough, coming from dead, dead last to fourth, and he won the two races prior to that. Can Martin make it three this Saturday? —Stallo

Torn ACL and All

Last time we saw the East Region in Foxborough, Autotrader/Yoshimura Suzuki’s Kyle Peters was riding to his first podium since 2013, despite tearing his ACL and MCL a week prior in Minneapolis. “We couldn’t really do much. Tried to keep the swelling down and get it flushed out. Couldn’t hardly do anything, really,” Peters said of his rehab entering Foxborough. “Couldn’t really walk around or work out or anything, so I pretty much just sat on the couch and hung out.” Peters hasn’t ridden since, but he will line up this weekend before undergoing surgery to repair his knee. Could he possibly pull off another top-five—or even podium—finish? —Stallo

In his first full season in supercross, Chase Sexton is leading all rookies in points, with 150 points scored in the West Region. Out East, though, the battle between Sean Cantrell and Brandon Hartranft will come down to Vegas. Cantrell has pulled away a bit with back-to-back top-five finishes and enters Saturday seven points clear of Hartranft. Which rookie will come out on top this weekend? —Stallo

It’s going to be hot this weekend. During qualifying temperatures are expected to reach 97 degrees, with humidity at 12 percent. It may not affect the riders much, but it could dry out the track—see Salt Lake City last weekend. The high is only expected to be 72 at night, so we should be okay for the heats and mains. But it’s definitely something worth keeping an eye on early in the day—the track could change a lot throughout Saturday. —Stallo