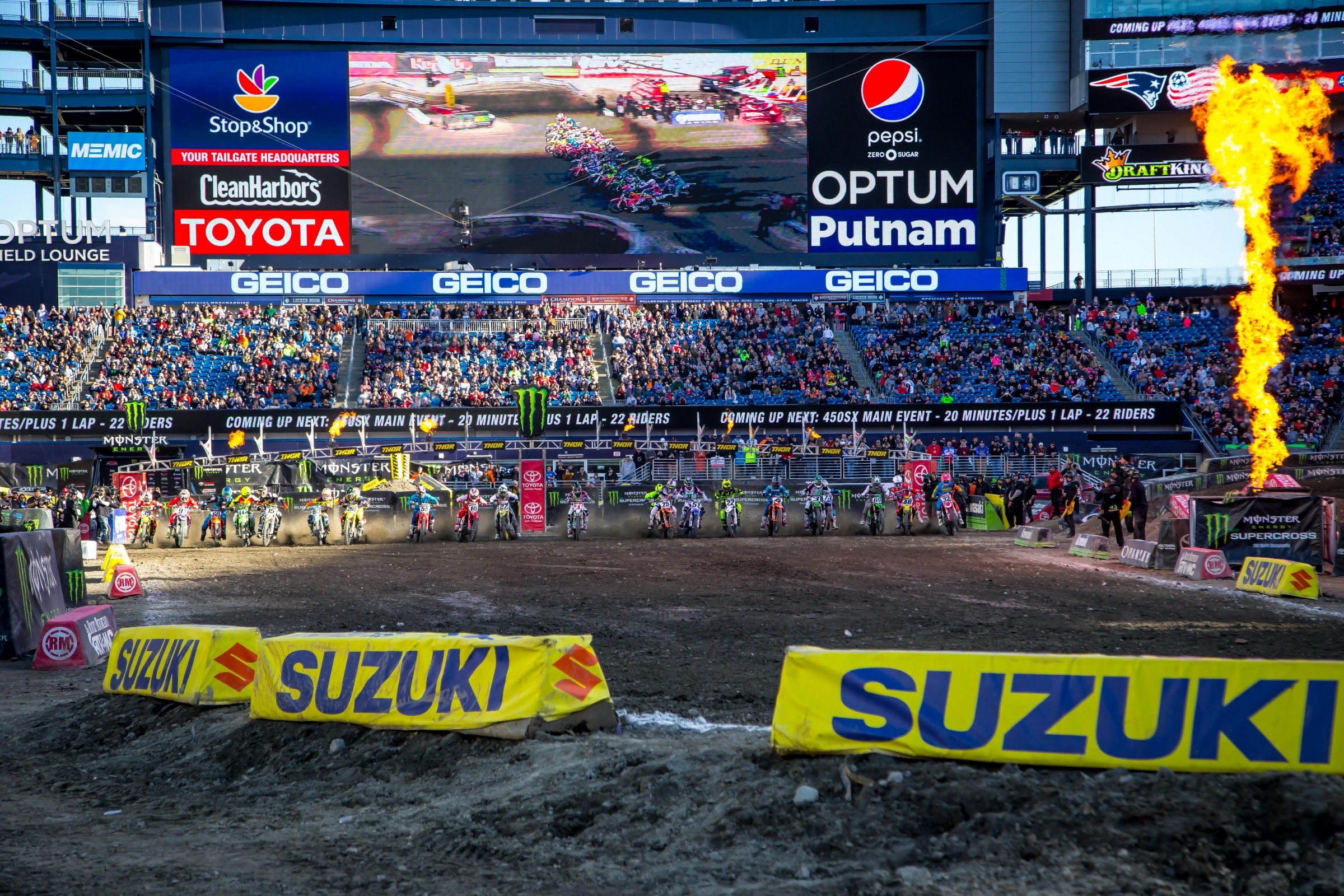 There wasn't a whole lot to be excited about heading into the 15th round of Monster Energy Supercross. Jason Anderson had a very comfortable lead in the 450SX championship and Zach Osborne's main competition in the 250SX championship, Austin Forkner, went down last weekend in Minneapolis. It seemed the air had  pretty much been sucked out of the series.

But luckily for us, Eli Tomac and Marvin Musquin came through with some last-lap action that got the comments section fired up, and Jordon Smith put up a good fight against Osborne in the 250 class.

We've talked about the Musquin versus Tomac last lap incident a few times here on the site, so I'm not going to waste too much time on it. Click here, here, or here if you want to read some way more qualified analysis of the event.

What gets washed away with the take out is how close these two were for the entire race. Other than the laps where they had to roll a triple and fight through some lapped riders that were fighting for their own positions, their lap times were pretty close for how gnarly the track was. Strangely, this time it was Musquin who had a harder time logging super consistent lap times, and Tomac's line is a lot more progressive at the beginning of the race. The main difference between the two obviously came on the last lap, where Tomac put in a 1:27.076 while Musquin was a 1:00.826. Take a look at their times for each lap of the main event.

In the 250 class, Jeremy Martin came through with the ride of the day. After going down on the first lap, Martin was sitting in last place even after the second lap. Once he got going, he picked off riders quickly and was in 11th by the halfway point of the race, and then fourth place when the checkered flag flew.

Many were looking forward to seeing how Martin would be able to challenge Osborne in the main event because Martin qualified 1.286 seconds faster than everyone else earlier in the day.

I charted out the distance between Osborne and Martin for each lap of the race to see if Martin was gaining or losing time on him while battling through the pack. Surprisingly, if you take out the 30-some seconds Martin lost in his first-lap crash, he only lost .158 seconds to Osborne. Take a look at how Martin was able to close the gap and then lost time once he came up to a group of riders, and then gained back that time once he cleared them. Impressive stuff.

On the Fly Racing Racer X Podcast earlier this week, Steve Matthes made mention of how few rider entries there were for Foxborough, with just 35 riders entering for each class. I decided to take a look at how the rider entries have faired for each round this season. We started out with 52 riders in each class at Anaheim 1, peaked in the 450 class with 59 at Daytona, and peaked in the 250 class with 53 in Oakland and Tampa.

There isn't a significant drop-off until Seattle, Minneapolis, and then obviously this weekend. The drop off in rider turnout isn't surprising when you consider how many injuries we've had, the bad weather at the last few rounds (snow in Indy, rain in Seattle, snow in Minneapolis), and privateer budgets are simply stretched thin at this point in the season. We'll see if these number rise back up in the mid-to high 40s  in Salt Lake City, or if the extra riders are just going to save their energy for the outdoors.