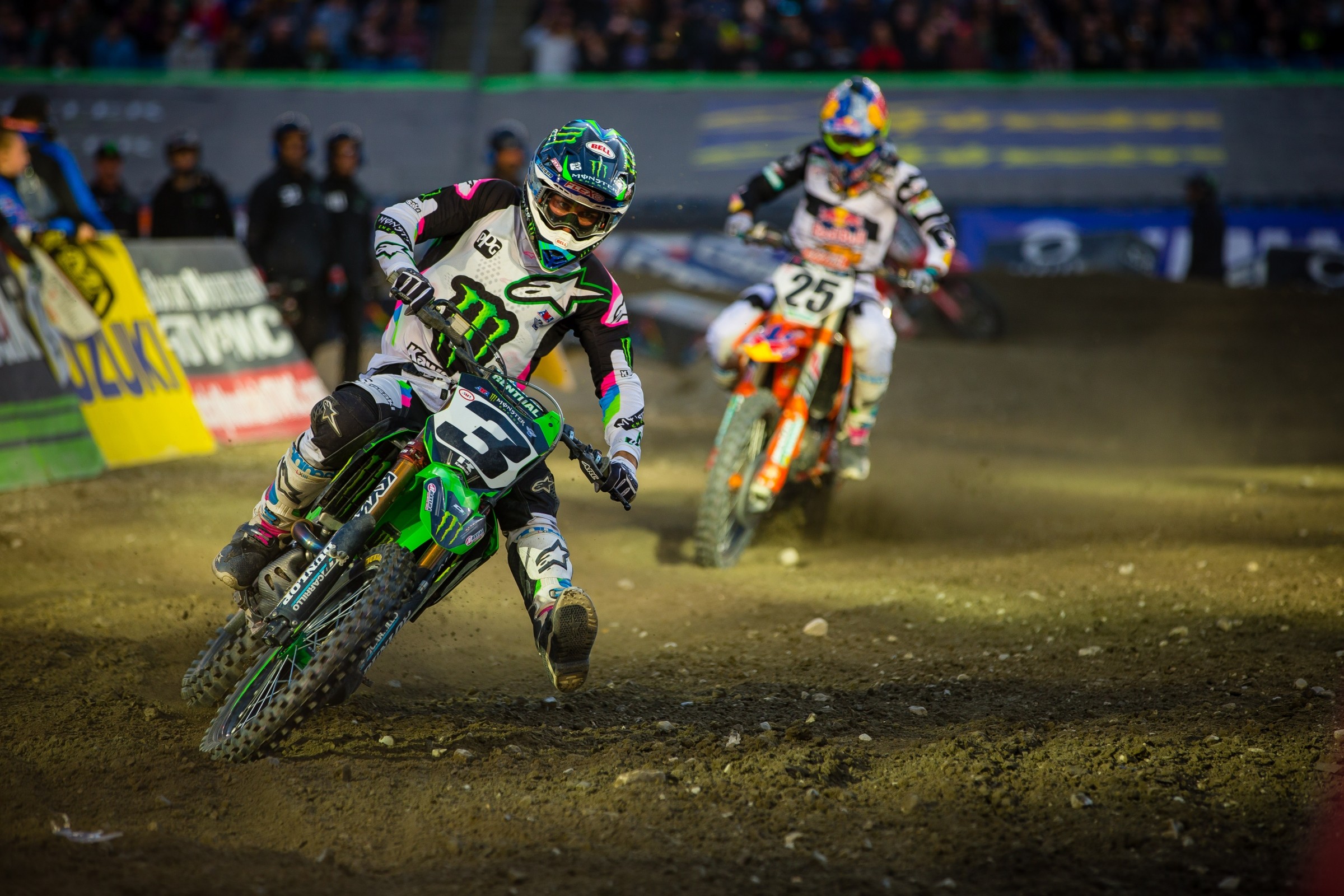 450 Words Your Guide to Musquin/Tomac

Tempers flared and many things were said and read after Saturday’s Marvin Musquin/Eli Tomac last-lap dust-up in Foxborough. Block passes are this sport’s liberal/conservative debate, as in there are always two sides and each will fight to the death to make a point. In fact, you have probably already stopped reading this and have instead scrolled to the bottom to witness (or participate!) in more battling in the comments section. As a test, here’s some extra text for you: monkey, chicken, coffee, stones. Those words make no sense, but no one is reading this paragraph, so they do not matter.

Let’s get some info in here you really need. As the debate has raged, here are a few things that need to get back into the open.

One thing to remember is that Tomac was responding in those scenarios—he did not start them. In Seattle 2012, Wilson hit him first. In Daytona, Webb crossed-jumped him multiple times, so Tomac admitted that he took him out in response.

It is impossible to accurately describe how angry Tomac and Monster Energy Kawasaki were that Musquin moved over for Dungey at last year’s East Rutherford Supercross. Tomac was absolutely incensed that it happened, so that convinced him to take the gloves off in Las Vegas. In Tomac’s mind, if KTM is going to try anything to win the title, well, he would do the same.

In each of these cases, Tomac feels he was evening the score, not starting it. This is why, in his TV interview, Tomac mentioned that he passed Marvin cleanly only to receive a full-contact pass in return.

Tomac picked the tightest inside rut he could. If Tomac picked Marvin’s line even further to the inside, he would have missed all the ruts and turned so slowly that Marvin would have just cruised right past him. He probably wouldn’t have made the double after the corner, either. You can shut the door to a degree, but if someone else is willing to knock the door off its hinges, you’re in trouble.

None of this matters if you think Tomac is a crybaby and/or left the door open. We get it.

Alves vs. Vanbuskirk. Last corner for the last transfer spot ... THEY BOTH GO DOWN! pic.twitter.com/RIDb3iuRsI

This is the reaction you get if you’re Ramyller Alves (who goes by Ramy, by the way, and perhaps now for more than one reason).

If you’re Marvin Musquin or Eli Tomac, the spotlight is much brighter. If this were a pass for seventh place, or on lap seven, it wouldn’t have mattered as much. A last-lap pass between two superstars for the race win is going to attract MUCH more attention, good and bad. That’s what these guys are dealing with right now.

Now, back to the comments section!