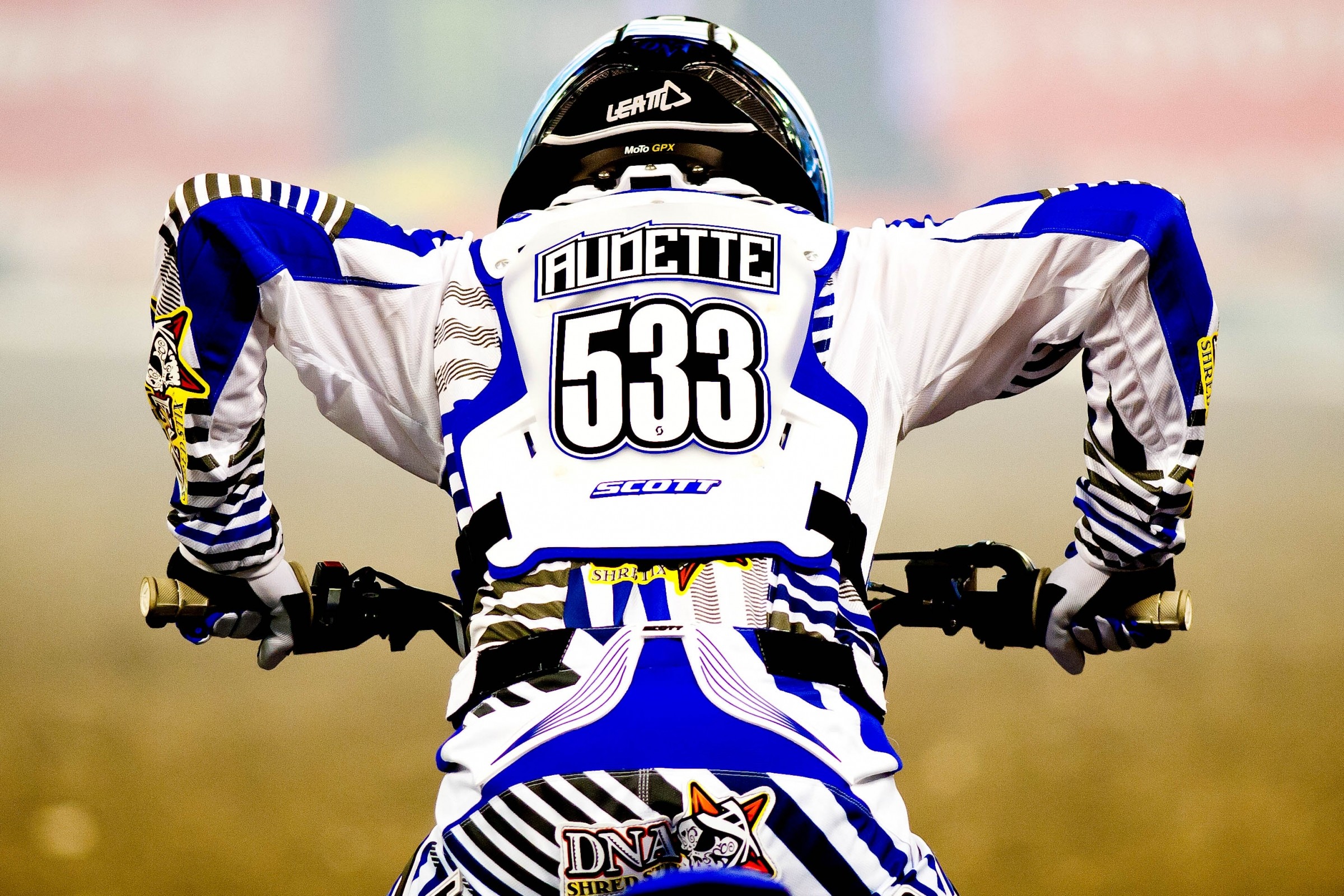 Where Are Gannon Audette

Gannon Audette was a highly touted amateur prospect from Minnesota. After winning two competitive championships at Loretta Lynn’s (450 B Mod in 2009 and 450 A/Pro Sport in 2010), Audette turned pro in 2011 and earned a ride with the Star Racing Yamaha team.

But then injuries started to set in—including a broken pelvis and broken wrists. Audette failed to make the podium for several years and was struggling to stay inside the top ten when he was healthy. In 2016, Mitch Payton picked him up as a fill-in rider and Audette scored some impressive rides, including a third-place finish at the Indianapolis Supercross, which would become the highlight of his professional career.

Audette announced his retirement via his Instagram account in December 2017. We looked him up to see how things are going since retiring and to see what the future holds for him outside of racing.

Racer X: You retired in December of 2017. What are you up to now?
Gannon Audette: I’ve pretty much been working for my dad. He owns a concrete contracting company here in Florida. After the Vegas Supercross last year, I pretty much took some time off of riding. I wasn’t sure what I was going to do going forward. So, as it goes, the last time I even touched a dirt bike was in July of last year. I hadn’t even rode or anything. Then I was kind of on edge about racing this year, and in December, I just made the decision not to race and everything. So, since I made that call, I’ve just been pretty much working. I’m now building a house and everything, and just trying to have fun while doing it.

The last time you really raced was the Vegas Supercross last year?
Yeah, that was my last race, and then I only rode twice since then. It’s been July of last year since I’ve rode. It took some time away to realize that I wanted to do some new stuff.

How are you finding not riding and adjusting to real life?
It’s been a lot of fun, honestly. I get to do a lot of things I didn’t get to do when I was racing. I’ve been just trying to enjoy it, but it’s definitely a change. You know, I’ve been riding since I was three years old and that’s all I’ve ever known. You just kind of come to a point where you got to move on. It’s been fun, though. I definitely have a different perspective on a lot of things. I’ve enjoyed it all, honestly. Everything’s going good for me, though.

Regarding the concrete business, you are from Minnesota, right? Doesn’t Ryan Dungey’s father do concrete as well? Seems like a funny similarity.
Yeah, I know. But you are right. I grew up with the Dungeys and everything. I actually did a little bit of work with him when we lived in Minnesota. My dad and him, they did a little bit of work together as well. So that’s what I’m pretty much doing now. It is a small world, but we are connected through racing.

Where is home now? You left Minnesota, right?
I live in Tallahassee with my family. My whole family moved from Minnesota to Florida in September of 2005. We moved down here and we’ve been living here ever since. We actually moved to Cairo, Georgia, originally. But then we moved to Tallahassee, which is only like 30 minutes away from Cairo. So, we’ve been down here since September of 2005, and then I just pretty much stayed down here. We enjoy it down here. We went home for Christmas this winter, and that was the first time since we’ve moved that we went home for Christmas. Man, it was cold! We all got sick and everything. It was a little bit of a disaster, and it seems that we weren’t used to the cold or anything.

Jason Weigandt mentioned that you’ve been to several of races this year. Are you staying connected to the sport, or do you plan to walk away entirely?
I only went to Atlanta and Daytona this year. That’s pretty much all I’ve been to. Me and Jeremy Martin, he’s my best friend and we still talk all the time. Outside of Jeremy and a  few others in the sport, I don’t talk to that many people. I’ve just pretty much been staying out of it. I still rarely watch it on TV or anything. Its not that I don’t want to, but I am always kind of busy and just miss it. But I still keep up with who is winning. I’m obviously a fan of the sport, and that is not going to go away. I wish I could go to a couple more and be a fan, but its tough to travel with work. I’d like to go to Minneapolis, just because it’s where I’m from, but I don’t think I’ll be able to make it.

About your decision to quit, what ultimately led to that? Were you just kind of over it or what?
Yeah, a little bit. It was more just a fun thing. It’s not that I wasn’t having fun anymore, but it was just kind of like I said before, you got to move on with your life at some point. It wasn’t obviously a huge money-making thing for me. It was just more a fun thing. Everyone was still supporting me. It was just basically my decision. I was working with my dad. I kind of got out of race shape and everything. I just thought it was the right thing to do, and to move on. I’m healthy as you can be, I think, coming out from that long of riding and racing a dirt bike. I was happy with all that. I just made the decision where I had to just step away from it. I was a little burnt out and everything from it, and now I have been enjoying other things in life. I guess that just kind of made the decision a little easier. After Vegas, I worked for my dad for probably four, maybe five months before making the decision. It wasn’t easy for sure, but I just knew it was time.

I’m glad to hear you’re happy with it. For some guys, it’s really tough to know when to draw the line. You had a really good season there a couple years ago and made a podium, and that wasn’t that long ago (2016). If you were to give any advice to guys who are in a similar situation, or any advice on the transition, what could you say?
I don’t know, honestly. Tough question. Just do what makes you happy, I guess, and what you enjoy. Put your time and effort into that. It’s obviously really hard giving up something you’ve done your whole life. That’s pretty much all I have ever known, so the next steps are not clear. It’s a lot different once you stop racing. I guess I would say just try to enjoy the process. Some people are more attached to it than others. I was attached, obviously; it was something I really enjoyed doing and something I’ve done my whole life. But at some point, you got to accept reality and there’s nothing you can do about it. That’s why you just try to make the most of it you can.

Do you see a future for yourself in the construction business with your father?
I don’t know. My dad owns the company and everything and it’s been doing really good. I’d kind of like to do other things, also, but right now I’m just super busy. I’m building a house and everything, so I’m really busy with that. Once I get that built, I’d like to try to get into some other things. I don’t know exactly what yet. I like investing and everything. That always is interesting to me. I guess whenever I get my house built and things slow down a little bit, I can start looking in other areas. But right now, I’m doing good and I’ve just been enjoying it.

Looking back kind of at your career, what would you say are some of the highlights?
I guess the first one that comes to mind, like you said, is where I podiumed in Indianapolis in 2016. I would say that’s obviously a highlight of my pro career. That was a really good night for me, even though it’s not a win or anything. It was still a big deal to me. I really enjoyed that. That’s something I’ll always carry with me. I guess Loretta’s and stuff like that, all those accomplishments. 2016 was probably just the biggest one for me, just because I had a big injury in the off-season and I wasn’t even sure if I was going to be able to race the 2016 season, or if I was going to be done or what. At that time, I was obviously a privateer. Going into the season and then getting that ride and then making the podium, that was a huge accomplishment for me and just a big relief, I guess you could say. That’s kind of what you work hard for and everything, and to see it pay off is awesome.