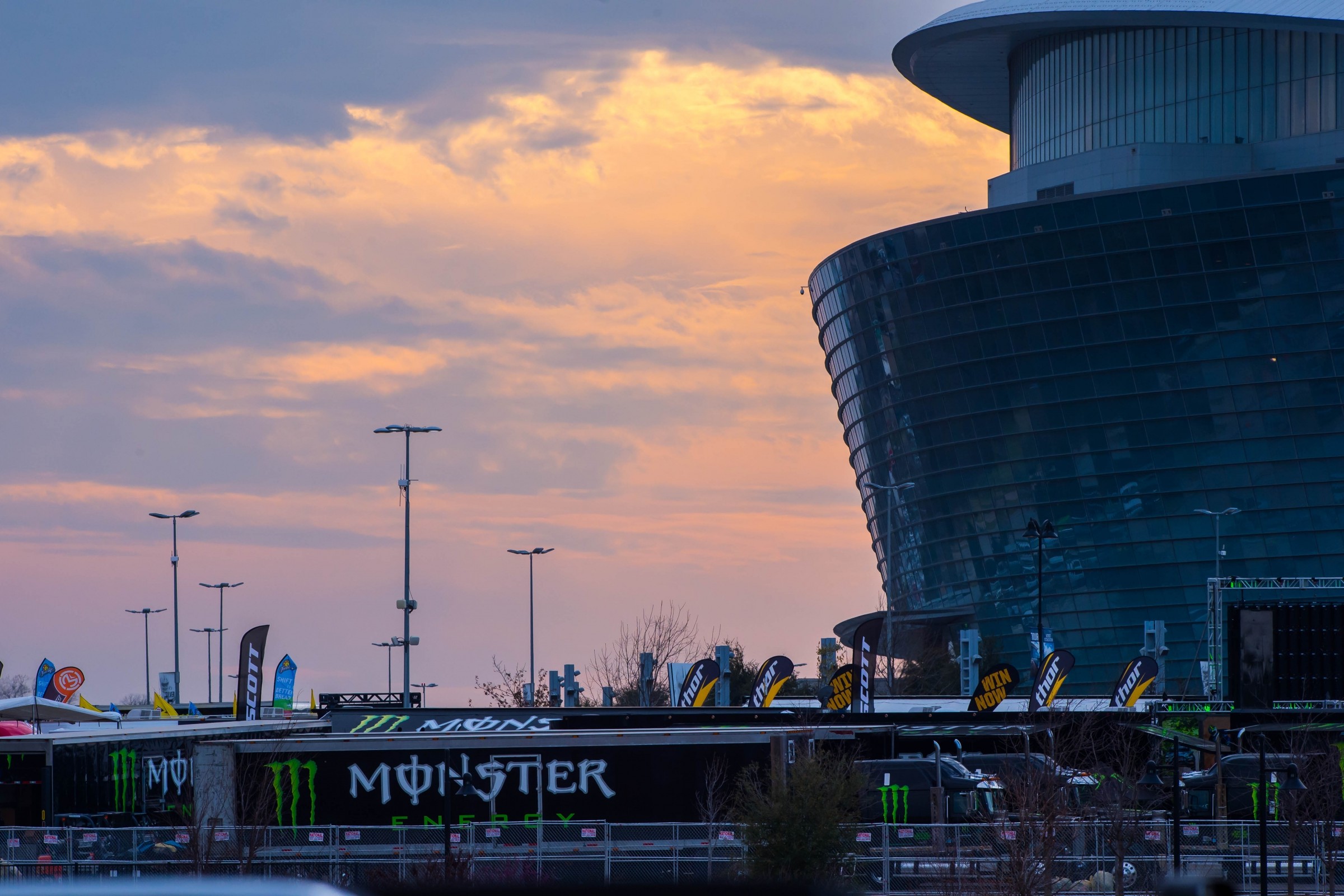 For the second time in this young season, we are rolling back into the Lone Star State. AT&T Stadium located just outside of Dallas is one of the spectacles of the sport. I will never forget our first year inside “Jerry’s World” back in 2010. Seeing the sheer magnitude of the stadium was worth the trip, let alone being able to race a dirt bike inside these hallowed grounds. Everything about this venue is larger than life, living up to the motto “everything is bigger in Texas.” The massive jumbotron is hard to miss. In fact, I have a hard time watching the action on the actual track versus the multi-million-dollar screen. Getting to hold supercross races in these new-era masterpieces has been a huge coup for the series.

The dirt in Texas varies from rock hard adobe to tacky, moldable clay. It usually depends on the weather leading up to the event and also when the race lands on the calendar. The one variable that will most likely throw a wrench into that plan again this year is the Monster Jam schedule. Like last year, Monster Jam hosted an event on the weekend leading into supercross. An extra week of the dirt sitting inside the dry stadium, and also being packed down by the massive monster trucks, makes a big difference in traction. Think back to last year’s chaotic Dallas race and all of the traction issues we saw in the main events. The triple landing on the far side of the track had riders losing the front end (Tomac, Baggett), and it seemed as if the most popular area of the racetrack during the main event was the mechanics’ area. If this track is indeed that slippery and treacherous once again, watch for the skills of Marvin Musquin to shine just like they did in 2017.

This year’s layout is a familiar one for me. At first glance, I was immediately taken back to the 2006 season. This layout is exactly the same template used at Detroit 2006 (and probably many more races, too). The long start bends to the left and quickly back to the right. This may look very generic on paper but it presents a unique racing scenario. See, the outside gates will be at a disadvantage as they make that first left but if they can put themselves near the front, they will then be put on the inside for the next right. For those that tuck inside in the first left, they are then pushed into the berm when the track veers right and will often times be pinned against that berm and lose spots. It’s a slippery slope for riders to navigate. Just getting out of the gate well and rolling through the first turn near the front doesn’t guarantee a good start. They will have to think quickly to stay up front as they round the second turn.

The first rhythm section looks like it could simply be a 3-3 but something tells me it won’t be. If possible, that 3-3 will be the fastest line but I won’t be surprised to see some variation of 2-3-1 to the inside or even a 1-2-3 after rolling the inside of the first jump. It depends on how the turns both before and after shape up.

If riders need the outside line for the following rhythm, they’ll want to downside the last obstacle and maintain momentum through the berm. That will set them up to possibly triple into the next section. This triple will be key. We saw a section similar to this at Glendale. At the beginning of that main event, the lead riders were able to triple over a tabletop to the downside of it and then triple again. If they can do that here, they will be able to triple-triple out of the section entirely. That will undoubtedly be the fastest way if it’s indeed possible.

Other options could be a double, then table-over-two which would land riders on the downside of the large middle jump. They would then blitz through the final single before the standard supercross triple. Riders could also triple onto the tabletop, step off and then double-triple. This option looks less ideal because only doubling will cost some momentum, especially since the take-off is a higher jump. Riders are always looking to avoid launching from the taller obstacles because you lose speed by going upward instead of outward. In any scenario, riders will want to find a way to triple-triple the last two sections and carry a lot of speed.

Coming out of the next bowl berm, riders will hit a dragon’s back section, blitzing up and off the top. It will be critical for riders to get a good lift and downside the next jump so they can accelerate again. There is a triple-triple out of the section that if hit correctly, will be efficient and fast. If riders screw up the initial dragon’s back, though, everything else will be thrown off.

A fast straight-away heads back down the starting line in the opposite direction and past the mechanics’ area, heading into a 120 degree right. Riders will step-on, step-off and into the first of two whoops sections. There is a kink in the middle of the first set so riders will have to pivot and lean right or otherwise head off the track. A bowl berm sets up riders for the second set and if the track crew really builds the roller bump shown on the track map, it will force riders to wheelie so they can carry speed into and through the whoops. If the whoops become “jumpers,” look for a rider like Musquin to leap off the roller and into the whoops. This can get him over the initial whoop and set up a unique rhythm through them. He is great at finding nuances like this.

A triple out of a bowl berm leads into the finish line jump and into lap two. Look for riders to land on the far right of the finish line landing so they can carry speed through the sharp left at the bottom of the jump. This will allow them to “open up” the turn and lessen the angle needed.

Is Zach Osborne going to take this East Region by storm?

Can anyone make the 450 series interesting or is Anderson going to run away?

Will Justin Barcia get aggressive with Jason Anderson as the title chase narrows?

Can Blake Baggett win one of these?

Who will be the biggest surprise of 250SX?

Jason Anderson is slightly warm. He has won two in a row and holds a 28-point lead. Wow.

Blake Baggett has podiums in back-to-back weeks and is looking for more.

Marvin Musquin finally looks back to his A1 form after his shoulder injury.

Ken Roczen had a big crash with Cooper Webb that will leave him getting surgery tomorrow.

Eli Tomac had his fourth bad race out of six thus far. Eli is the COW of 2018. Crash or Win.

Justin Bogle was still trying to get back up to speed after missing the first few rounds and now will miss many more due to a broken humerus suffered in his heat race.

Feld and the AMA mandate bubble wrap for all riders after losing another star to injury in San Diego.

Daniel Blair is missing during a TV spot and is later found drinking Johnnie Walker Blue with Jerry Jones in his Cowboys suite.

Marvin Musquin wins his first race since A1.

Zach Osborne sets the fastest time in qualifying, wins his heat, and wins the main.

Aldon Baker and Jeff Emig consult but still have no answers as to why Marvin would ride aggressively with JA21.