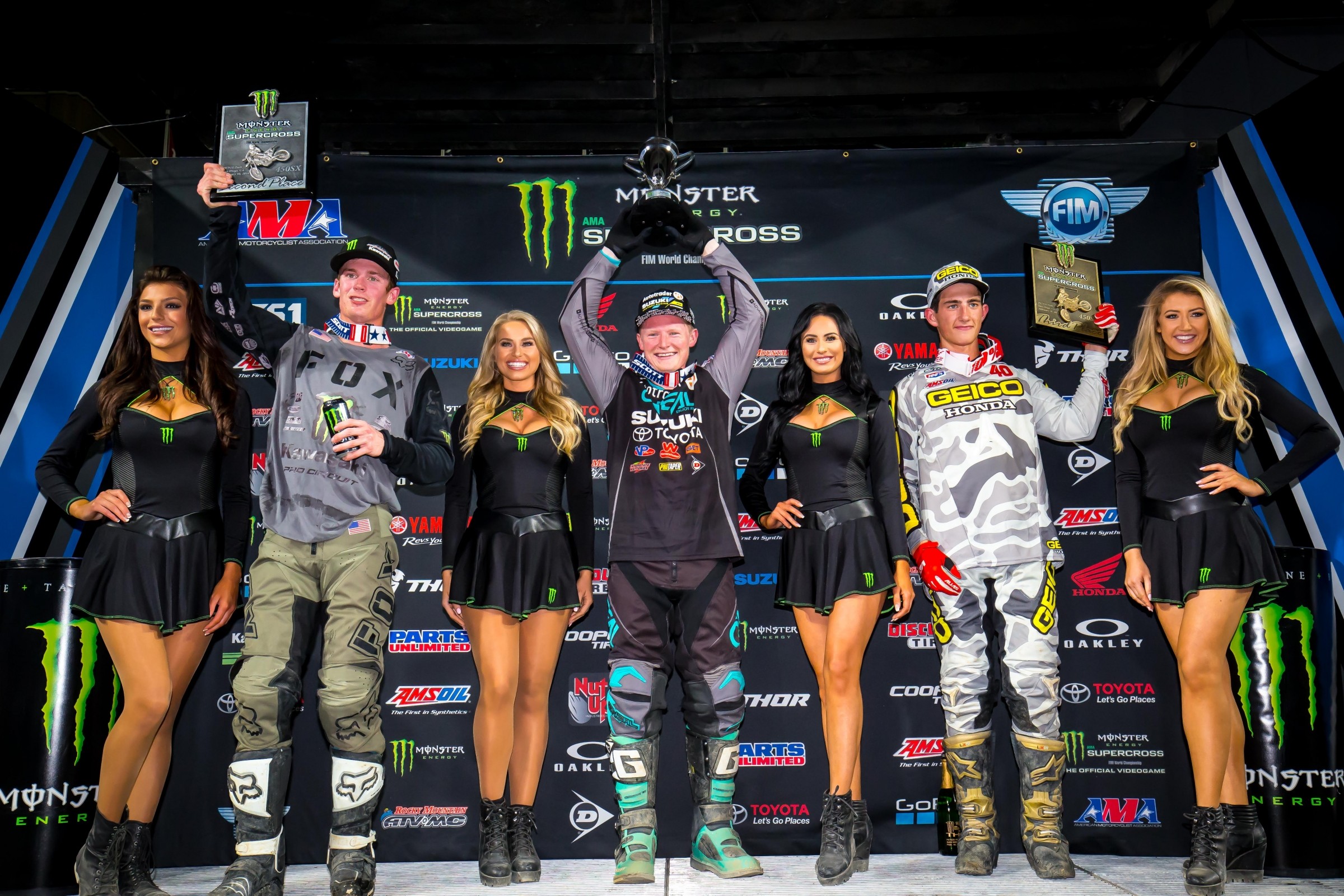 Racer X: Chase, congratulations. Your second podium of the year, but this one was a little different. You had a chance to sit behind these two most of that main event. Is there anything that you learned sitting there behind that battle up front?
Chase Sexton: Yeah, for sure. These guys were riding really good. I didn’t get off to the best start. The gates were pretty messed up behind the grate. I just got off to a decent start enough to where I could make something happen. I got through a couple riders, passed Joey, and was behind these two. They were battling pretty hard, so I was just trying to be there in case something happened, but nothing happened. I got messed up by a lapper and they kind of dropped me. It was overall a good race. The track was getting tough at the end. The whoops were pretty treacherous. I’m just happy to come away with a third.

Adam, congratulations. Not a question for you tonight, just a statement: Chase’s golf swing is way better than yours.
Adam Cianciarulo: Absolutely, but I get him with the mental game. I’ll wear him down over 18. I’m coming out with a double bogie, but I might end with a par. That’s where we’re at.

Cianciarulo: He’s got custom gloves. I might have to hit up Ricky Fowler. Why are you opening up with a golf question?

Why’d you finish your night with a golf answer on the podium?
Cianciarulo: I was trying to keep it light.

I’m just trying to keep it light. Well, you came out of the gate, though, with not a double bogie. Got a great start. Comment on that?
Cianciarulo: Yeah, the start was good. The heat race start was good, practice start. The last qualifying session when they let you go off the grate, that was spot-on. Main event start was not that great out of the gate, but I was just sitting here telling Jason [Anderson] and Justin [Hill], I told myself no matter what I did out of the gate, I was going to send it into the first corner pretty hard, no matter what. It’s so frustrating, kind of being in the back. You get fifth. You ride pretty good and then that’s just it. Then you got to wait a week to make it happen again. For me, I was going to get closed off, but I kind of sent it in and got a little bit lucky. Kind of broke it loose. Hit Joey [Savatgy] a little bit, actually. I was able to make some passes there in the beginning, but the start was nice. It was nice to kind of get that monkey off our back.

Justin, congratulations. Like last weekend with Joey, you got yourself in a battle back and forth with Adam. Obviously, being on the better end of it getting the win, I have to imagine it was pretty fun though racing back and forth. Pretty clean, but a lot of back and forth there in the middle.
Justin Hill: Yeah, great battle. We did a couple where I wasn’t quite sure where he was going, but I just made a decision and hopefully it was going to work type of thing. So, it was a lot of fun actually. To win those is way sweeter than just doing a wire-to-wire and being out there all by yourself. It was a great night for me. Great day, overall. I had the quick time, heat win, main win. It’s perfect.

Justin, you’ve been very vocal about wanting to ride a 450. After that performance, are we going to see you next week on a 450?
Hill: I’ll go back to the truck and talk to the team a little bit and see if they want to do it. Unfortunately, Bogle crashed hard tonight, and I don’t know if I’m not supposed to say anything or what, but he’s hurt. So maybe they’ll want to throw that 450 right back out there. I don’t know. I’m going to talk to them about it. I had already brought it up. I just want to get a couple races in on the big bike if possible, if it’s available. I want to do it hands-down, if we can. I know it’s a new bike this year, a new 450, and I know that Chris Wheeler and the boys over at Suzuki want to get it out there and try to put it towards the front. I want to hopefully do that for them.

Justin, you were following Adam for a long time, just kind of right on him. You guys were both doing really fast laps. Were you kind of thinking of areas to pass, or were you just kind of waiting for the clock to get closer to zero?
Hill: No, I was just the whole time watching him, watching what he was doing and just figuring out if I did certain things better or not. I was trying to work it out the whole time. Am I better than him here or not? That kind of thing. Towards about that halfway point, I started to just lay it on a little bit and kind of caught him. Then we battled back and forth for a little while. The initial pass that I made, I didn’t think I was going to do it there. I thought maybe it could happen, but I didn’t really go for it. Then I realized, I’m next to him. I should probably try this. So, I got it done there. It was a back and forth, really fun battle.

Adam, you’re one of the only guys to use that option line with the one corner. Why’d you keep going out there?
Cianciarulo: I saw it when I was just watching the races back at the rig after the heat race. I saw a couple guys go outside. I think I saw Brayton on TV. I forget who he was racing with, but it seemed to be pretty fast. I saw Justin [Hill]. I would go inside. I could see his bike. I could see him go outside. I couldn’t really tell. I didn’t think we were losing too much time either way. I thought the risk of going to the inside was a little bit more because we were starting to kind of make that corner and tighter and tighter and that rut was getting deeper. So, I just wanted to try it. I felt like I did pretty good with that kind of stuff all day, kind of moving around and trying to figure stuff out. Definitely Justin was killing me in the sand after the whoops. Then that whole section after the finish line there, even that section there, especially that dragon’s back, whatever that thing is. He was killing me there. I just wanted to try something different.

Justin, your performance has been 180 degrees from what it was earlier in the season. What percentage do you attribute that to bike settings, and how much of it, maybe, is just mindset?
Hill: I would say it’s definitely part-mindset. I think I’m just way more comfortable now. I was kind of chasing my tail a little bit at the beginning of the season, trying to make the bike something that it wasn’t. Now I’m just sort of in the middle of the road with everything on the bike. It’s working way better than I would have assumed it would the way it is. So, I’m just really comfortable now and I can do whatever I feel like doing. I just feel back to normal.

Chase, take us through the pass on Joey.
Sexton: I made a pretty good pass, I feel like. I was kind of catching him a little bit and I had to make something happen because I was getting caught by Aaron [Plessinger] and a few others behind me. I had to make a pass and I jumped inside of the triple and stopped him from doing it. We had a little bit of a run-in in the next corner, but it was, I felt like, a good pass. From there I just rode smart and kind of gapped him a little bit and had a pretty big comfort zone between him and I. I was pretty close to these guys, but they were riding really good and I couldn’t make it happen.

Adam, I honestly felt like this was your race to lose if you didn’t wash out the front end. You seemed to really drop off the pace in the last few laps. Were you feeling tight? I know a lot of pressure perhaps from Justin.
Cianciarulo: Yeah, definitely, we were pushing hard. Justin was riding great all day. One of the things Justin does really well is he rides really efficient, too. I heard him behind me, and I just know in the back of my head I can almost picture myself watching him on TV and he’s just like “la, dee, da, dee, da.” And I’m just balls to the wall all the time. That’s just my riding style. So, I used a lot of energy in the beginning of the race trying to get Joey because he was right on me. Did I pass you in the beginning after the on-on-off?

Hill: I started behind you.

Cianciarulo: I don’t know. Either way, can say I passed him. Let’s say that. I passed Joey. I used a lot of energy in the beginning of the race and I got arm pump in my right arm a little bit. I’m not going to say I wasn’t tired—it was a difficult race for me. I probably could have rode a little bit more efficient. I was a little bit out of control, but that’s what happens. This is the first time I’ve been up front all year, so I guess we’ll take it in stride.

Justin, you’re 29 points behind but there’s two East/West shootouts coming up. In a short series, that’s a pretty insurmountable amount, but does that give you hope with those two events coming up?
Hill: Yeah. I’m not really thinking about it, but if I can just keep being up front and keep trying to win, that would be cool to be in the title chase. Last year I won it by 35 points or something like that, which is quite a bit. Hopefully it’s something I can come back from. Truthfully, I’m just happy to get a win on the team and really push the fact that the team is good and the bike is good and everything is working. I just hope I get more wins. That’s all I really want at this point. You’re not going to win a title unless you win. I just got to worry about that right now.