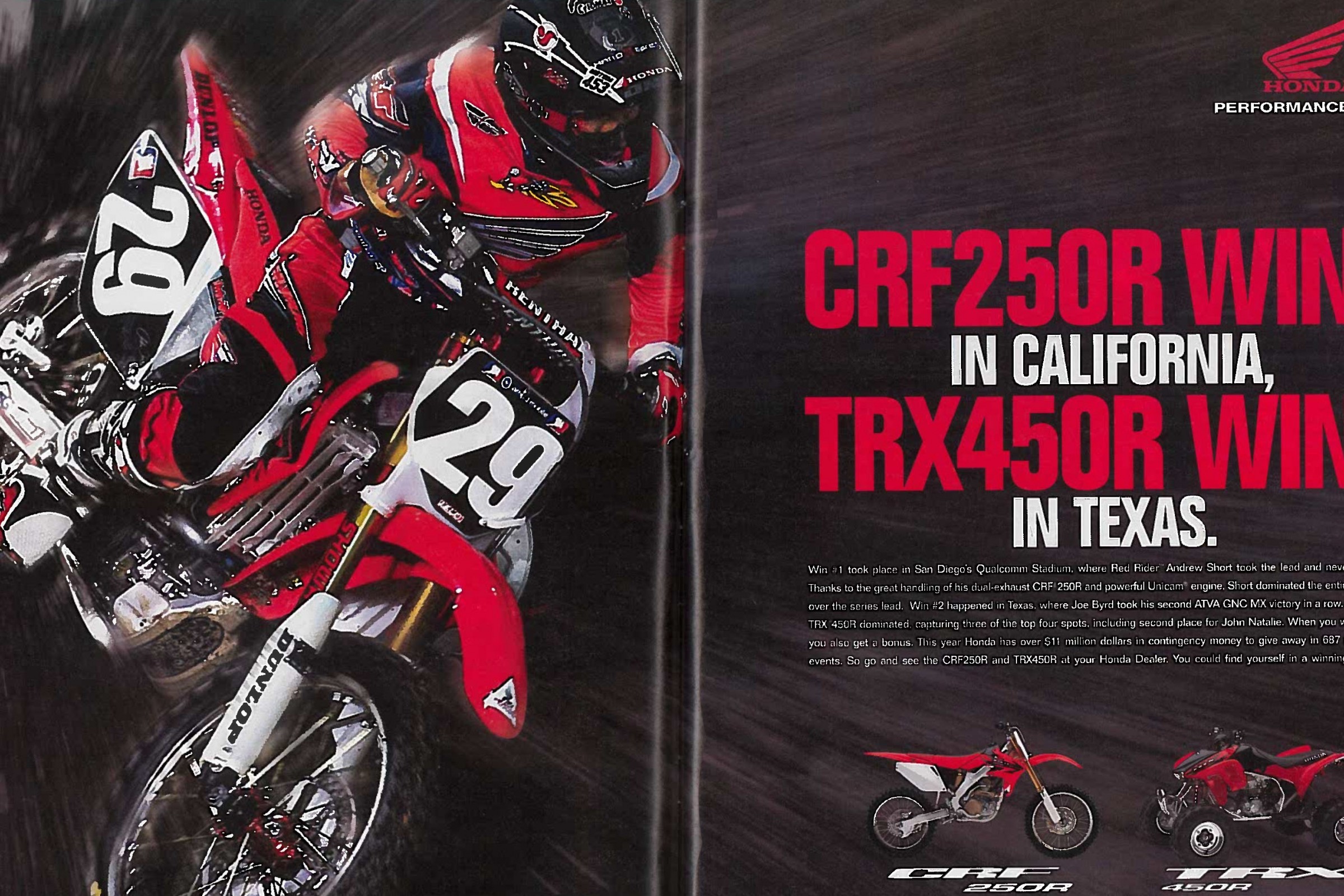 On This Day in Moto February 11

Remember the tangle we told you about between James Stewart and Jeremy McGrath that took place at Anaheim 3 on February 3? Stewart was having a tough main event and crashed a few times in the opening laps, including hitting and dropping the seven-time AMA Supercross Champion. Well, McGrath, who came out of retirement to do a few races for Team Honda, needed just one week to get even—to some degree. McGrath would holeshot the following week’s heat race at San Diego inside of Stewart, and then take the Kawasaki rider outside and off the track in a little bit of payback. Check it out here:

“James had the start, and I came underneath him and gave him a little love tap, kind of what he gave me last week,” McGrath told Cycle News’ Kit Palmer after the race. “You can’t get away with it with no medicine back. I didn’t know the opportunity would come so quick—one week later and there it is… I’m sure he’s upset with me, I just can’t let everyone do that to me. That’s all—nothing personal.”

That done, the racing went on and Stewart actually had a superb night, passing Suzuki’s Ricky Carmichael in the main event after 18 laps of stalking the defending champ to take the win, with Chad Reed finishing third on his Yamaha.

But further back, no one realized that the fourth-place rider, Jeremy McGrath, riding a four-stroke for the one and only time in his entire AMA Supercross career, kept his #2 CRF450 ahead of everyone else to show that he still had it. And when the race ended, so did McGrath’s time as a professional supercross racer. Little did anyone realize that the all-time King of Supercross really was racing in his last event, his six-race “fun tour” having ended on a very high note. When asked after the race what he was going to do next, McGrath laughed, “I’m going snowboarding for a week!”

Sadly, the whole night of good racing was offset by a terrible heat race crash for Texas privateer James Marshall, who went down in a tricky rhythm section and then was hit by Team Honda’s Ernesto Fonseca. Marshall suffered a career-ending spinal injury

#1 Honda rider Rick Johnson won his fourth straight AMA Supercross race to start the '89 season, this time in San Diego. His teammate and understudy Jeff Stanton was second, but headlines were stolen by the third-place finisher. In his first-ever AMA Supercross, 16-year-old Damon Bradshaw finished third in his one and only 250cc appearance of 1989. He will go back to the 125SX East Region, which began the following week in Miami's Orange Bowl.

The top three in the 125 class were Jeff Matiasevich, Mike Craig, and Mike LaRocco.