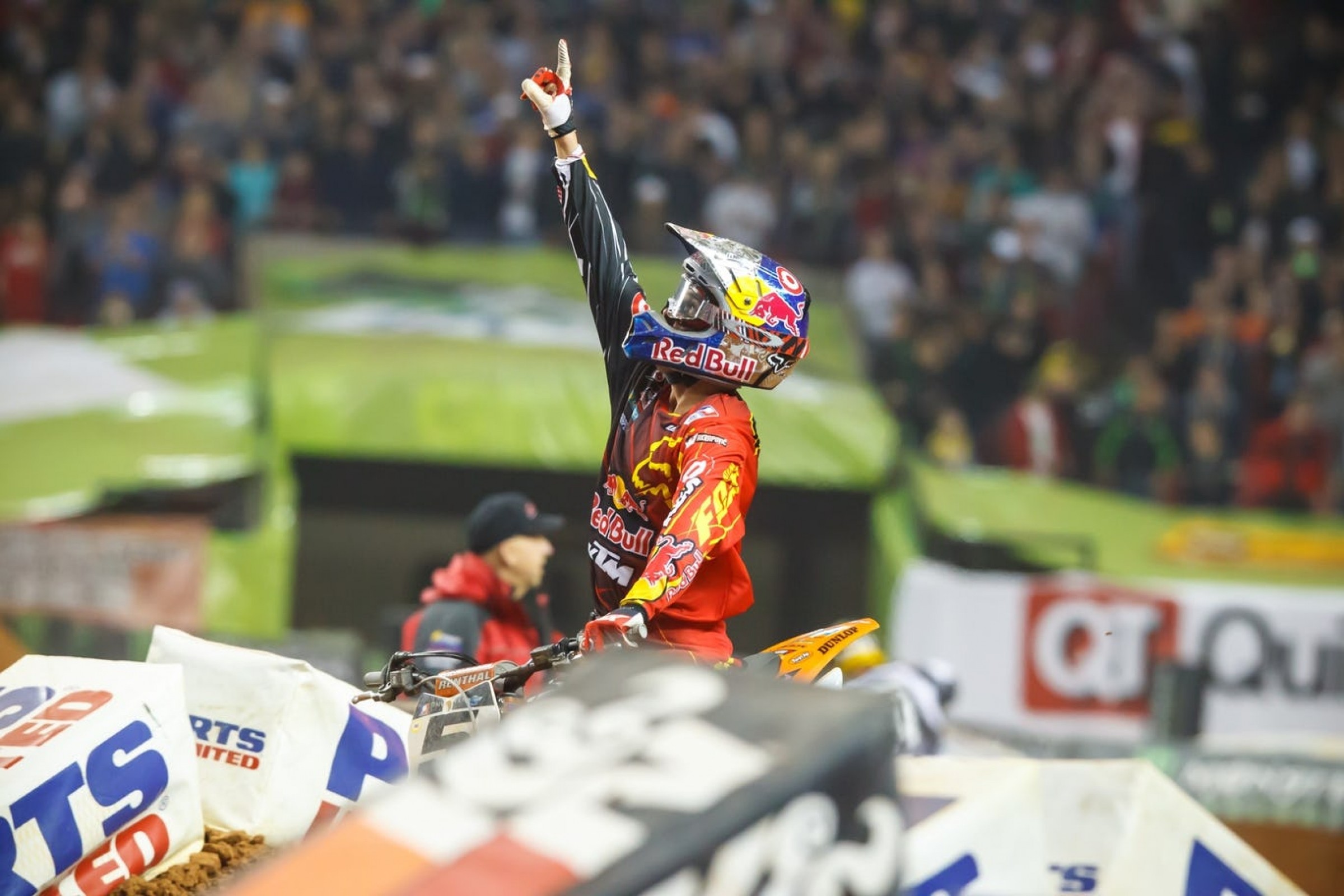 Where Are Ryan Dungey

Last May, just days after clinching his fourth Monster Energy Supercross Championship, Ryan Dungey announced his retirement from professional racing—effective immediately. Dungey, 28, is now doing a variety of things and trying to plan his future. So, what has he been up to? We recently sat down with the champ and asked him how the adjustment is going.

Racer X: You are eight months into your retirement, which was announced just days after you won your fourth Monster Energy Supercross Championship last May. Just how strange did it feel sitting here at the first Anaheim and not lining up?
Ryan Dungey: Of course, it’s different. I got asked that a lot. What’s it feel like? There’s a lot of things in racing I miss. I miss a lot of things. There was a lot of good moments. It was tough for sure, but the whole experience, my whole career, was really enjoyable. But being here for A1 this year, it was nice to support the KTM guys.

Obviously, with my racing being done and moving onto the next phase, just being able to be here and support them, it’s all good. The team, well, they have things pretty well covered. But you know, I won’t lie. It’s a big change. It’s something I am learning how to adapt to. It’s almost like the things I’ve been teaching people or preaching about or telling people over the course of my career, now it’s time for me to live that and live out the things that I believe in and preach about. It’s been good. It’s been different. I’ve been able to still help the team and be around the sport and support the guys. I really don’t have a main role right now other than kind of trying a little bit of everything and to get a feel for what I really want to do. That way I can know what that’s like, because I haven’t been in this role before.

I sensed a little apprehension in your voice, and talking about the change. Is it hard?
Yes, it’s been hard—but in a way that I’m a really, really active guy. I like to stay busy. I’m used to always doing something. So, you can imagine racing motocross, and at the level we were at, it was a 24/7 deal. You’re practicing, you’re riding, you’re training, you are eating, you are sleeping or resting. Your whole day is planned out, and sometimes weeks in advance. You’re constantly working and being disciplined with your time and energy while being into the sport all day every day. And then all of a sudden it goes from 100 to nothing, and really fast.

I guess when you look at the training and practice programs you were on, I can see how stopping it, for lack of a better description, cold turkey can be a big adjustment.
Exactly. But there’s also a lot of stuff that’s still happening for me and still taking place. We have kept up with a lot of travel and am doing some team and sponsor stuff. But as far as on the track racing and what I was doing with that, it was full-time for me. It took up most of my days. So, 23 years of doing that, and then all of a sudden you just stop it. It’s a big change. So, still at this point there’s a little bit of trying to understand things for me and where to go, where I feel like my strengths and aligning myself with areas that suit my strengths and applying that and moving forward.

How did it feel at Christmas to be able to eat whatever you wanted?
Definitely not having to stress about that first race was nice. I think for a long time you go home for Christmas, but you’re leaving the next day. So, you can’t really enjoy the downtime. You can’t really enjoy much of the food, because you’re in training. It was good. I got to enjoy it, as well as more time with the family. And maybe I did eat a little bit of non-healthy food…. It was nice for sure. There are some things in racing you always had to hold back on. You wanted to be prepared. You wanted to be focused and mentally prepped. So being able to kind of step out of the box and experience the other side of it was a nice change.

What are you doing in terms of your home base? Are you still living in Florida? We [Ryan and his wife Lindsay] pretty much sold our house in Florida. We moved back to Minnesota. For us, we wanted to kind of gather ourselves up and get in one place and not be all spread out. Minnesota is a great spot for us. It’s home base now. Both of our families are from there. How we plan to go about our future—well, it’s good to have our family there for help. But we are also looking to branch out to a warmer climate and be productive within the industry and doing that type of stuff. And that includes with the team in California or down in Florida at Aldon’s [Baker] place. We are just trying to kind of stay involved in helping Team KTM and motocross in general moving forward.

There are so many ways to go for a guy like you. You can go into team management, you can become a trainer, or just an ambassador. You can even just walk away altogether, if you want. Any idea on what you really want to focus on going forward?
For me, and at this point, there hasn’t been an exact thing that I’ve been doing. I put a lot of my focus in how I can help make the sport better. Areas from whether it be with the racing, with the team, or working with young kids. I would just like to try and make the sport better and to keep growing it. That was one of my goals when I was younger, too, and when I came on the scene as a racer I wanted to do that, but you only have so much time you can dedicate to that stuff as well, and my priority was on becoming a better racer. So, now having more time and more availability in my schedule, I can put more of my efforts into these things. There’s a lot of opportunity here, so being able to capitalize on those things and maximizing it.

What do you think of Ken Roczen’s comeback?
I think scoring fourth at the season opener was as good as a win, in my book. He has done well with it. We all know it’s not easy to do what he has done.

How has your retirement been for you and Lindsay?
It’s been really good actually. You know, when I was racing, everything was centered around me and what I had to do or where I had to be—and winning races. Now that the focus is off that, we can do stuff together and she gets more time for herself. She is no longer giving up her life for me, and for my career. It’s been really good and we have been having a lot of fun and doing new stuff, basically just trying to experience a little more out of life.

I could ask questions for hours—but I won’t. Last question: any regrets on your decision to retire?
No. None at all. I am good with my decision. It is a bit strange feeling, for sure, but I do not regret my choice. I am in a transition phase right now, and am grateful for my team and sponsors, that they are allowing me to try out many different roles.