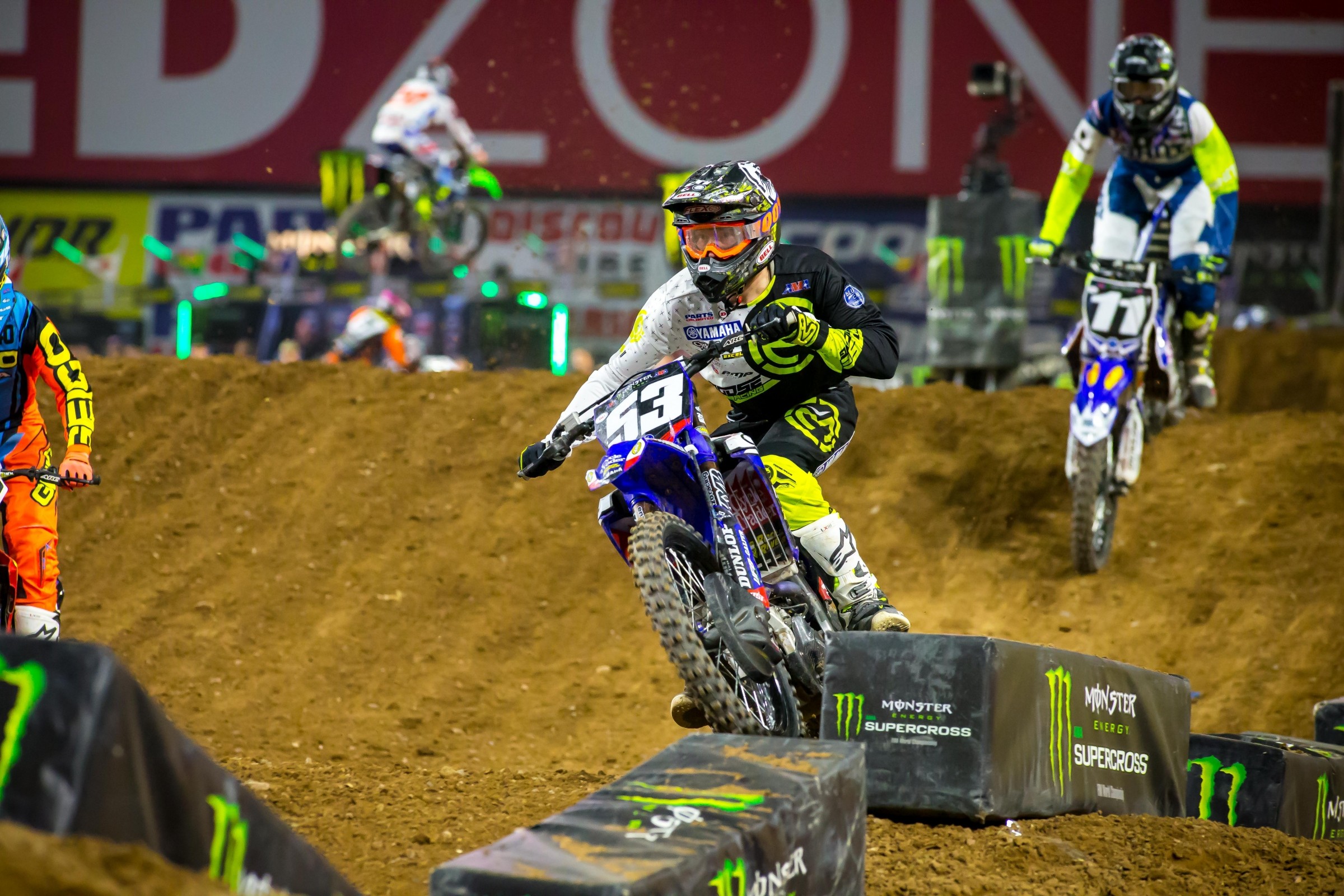 Lots of Yamaha support teams out there in 250SX, including CycleTrader.com/Rock River Yamaha and 51Fifty Energy Drink Yamaha. We checked in with one rider from each squad last weekend at Glendale, Arizona, to get an update.

Racer X: There was major Bradley Taft hype during the off-season. Did you hear this?
Bradley Taft: Yeah, I heard.

Was there something you were doing special? What was generating the hype?
Yeah, I was having good weeks at the test track leading up to Anaheim 1. Last year I got hurt after the second round so I’m basically re-doing my rookie year again. I just need to get comfortable and figure it out. Set small goals for myself this weekend and try to improve each weekend.

On Saturday?
It was good. Finally got starts figured out pretty good; I was up front toward the beginning of the main. I was behind [Chase] Sexton and I just got tight throughout the main. I ended up sixth, best finish so far.

How do you feel on the track here compared to those fast times you had going in the off-season? Are you bringing that to the track?
No, we’re still not there. I train with Gareth Swanepoel so I ride with [Aaron] Plessinger and all of these guys, and if I rode the way I did at the practice tracks, I would be on the podium. But like I said, this is new to me so I’m just figuring out this supercross thing every weekend. I think by the end of the year, I’ll be getting up there.

Give me an idea of something you’ve learned at the end of the night, or something you’ve seen that is different in the race from those good days at the test tracks.
For me, I’m just struggling to bring the intensity I have at the test tracks. I ride at the test tracks and I’m killing it, riding hard, scrubbing everything, just a lot of intensity. Then I come here and, I don’t know if I just get tight or what it is, but I just don’t bring that same intensity. I think that’s the only thing I’m lacking. There’s nothing that those guys are doing that I’m not. It’s not like they’re jumping rhythms that I’m not. It’s just that intensity.

Racer X: The last two weeks you have nailed the starts. What the heck is going on?
Kyle Chisholm: Honestly, I like the steel grate thing or whatever. I did Red Bull Straight Rhythm every year they’ve had it.

You gave me like a dissertation on that years ago. You like it.
Yeah, I like it. I did that, and then Monster Cup’s had it a few times. I did it at the MXGP in Florida this year. I just kind of have it figured out, I guess. We’re keeping our secrets, though. But now on the 250, all those starts were on a 450. So, I’m like, I don’t know if that same game plan is going to work on the 250. I tried it, and at first the team before the season, they were like, “I don’t know if they’re that good. They looked better the other way you were doing them.” I had two different ways to do it. I’m like, “I’m telling you guys, it’s better like this—on the 450 it was.” So, I just stuck with it and my starts have been… I’ve had a couple that weren’t that great, but they’ve been honestly pretty good. I’ve been happy with it. The bike honestly is really good. The team does a great job with the bike. The motor’s good on it.

Unfortunately, my riding hasn’t been that great the last couple weeks to go with the starts. But I made a change on my bike this week during the week, suspension change. Got it a little more comfortable for me. It’s hard during the week. When you get to the weekend you’re like, “It felt good at the practice track, but is it going to feel good at the race?” It felt pretty good today. We didn’t make many changes. I feel like I’m in a pretty good place on that end of things, and the motor’s been good. So, I think I’m at a place where I can just spend time on the bike and get seat time on it. I’m not making excuses, but just like last year, I had four weeks to get ready on a new bike and back on the 250. So, I’m still just every time I ride learning the bike, getting used to it. I wish I had more time before the season started, but the cards fell how they did. I’m thankful for the opportunity that I do have. I think I’m at a place with the bike now where I’m happy with it. Now I can just keep getting time on it, just learning it. Houston was super soft dirt, so I’d go into a turn and I’m like, “What’s the bike going do? Okay, now I kind of know what it’s going to do.” Today it was muddy in practice and rutty and slippery, and then dry and blue groove. Just learning it all the time.

This literally runs through your mind as you’re hitting laps?
Yeah, and I’m getting older and whatever. I’ve gone through all this stuff. I kind of know what I like.

Maybe less willing to just say, “I don’t care, I’m just pinning it?”
Yeah. Honestly, I’ve kind of never been like that, unfortunately. Sometimes I wish I could be. Even when I was younger, I wasn’t like that that much. I’m more of, “Okay, I feel comfortable. Now I’ll turn it on.” More like a K-Dub [Kevin Windham], I guess, how he kind of used to be. So, there’s that a little bit. I just wish I had more time. You look at guys like—and again I’m not making excuses—but even my teammate, Hayden [Mellross], look at Shane McElrath. Those guys have been basically on the same motorcycle for two or three years now. They can just carry over from one year to the next. Where, me, it’s like I literally had 30 days to get used to this new bike and then go race on it at Anaheim. I’m still learning what I like on the bike. There’s stuff we haven’t even run though that I’m like, let’s just stick with what we got. There could be a linkage that I may like better, but I don’t even want to get into it at this point. That’s kind of like, let’s just get me comfortable and then leave it as is. That’s where starting a little earlier, maybe like October, would have helped, but the team just wasn’t in position to be ready to go then. That’s when it’s nice, when you can stick with the same team from year to year and on the same motorcycle. I honestly haven’t done that since, like, 2012. I’ve been on a different motorcycle every year. So, it makes it tough. Like I said, no excuses. I’m thankful for what I do have. I could be sitting at home. Trying to make the best of it and just get better. If I can get better every week, that’s all I can ask for. Just try to be close to that top five is what I really want.