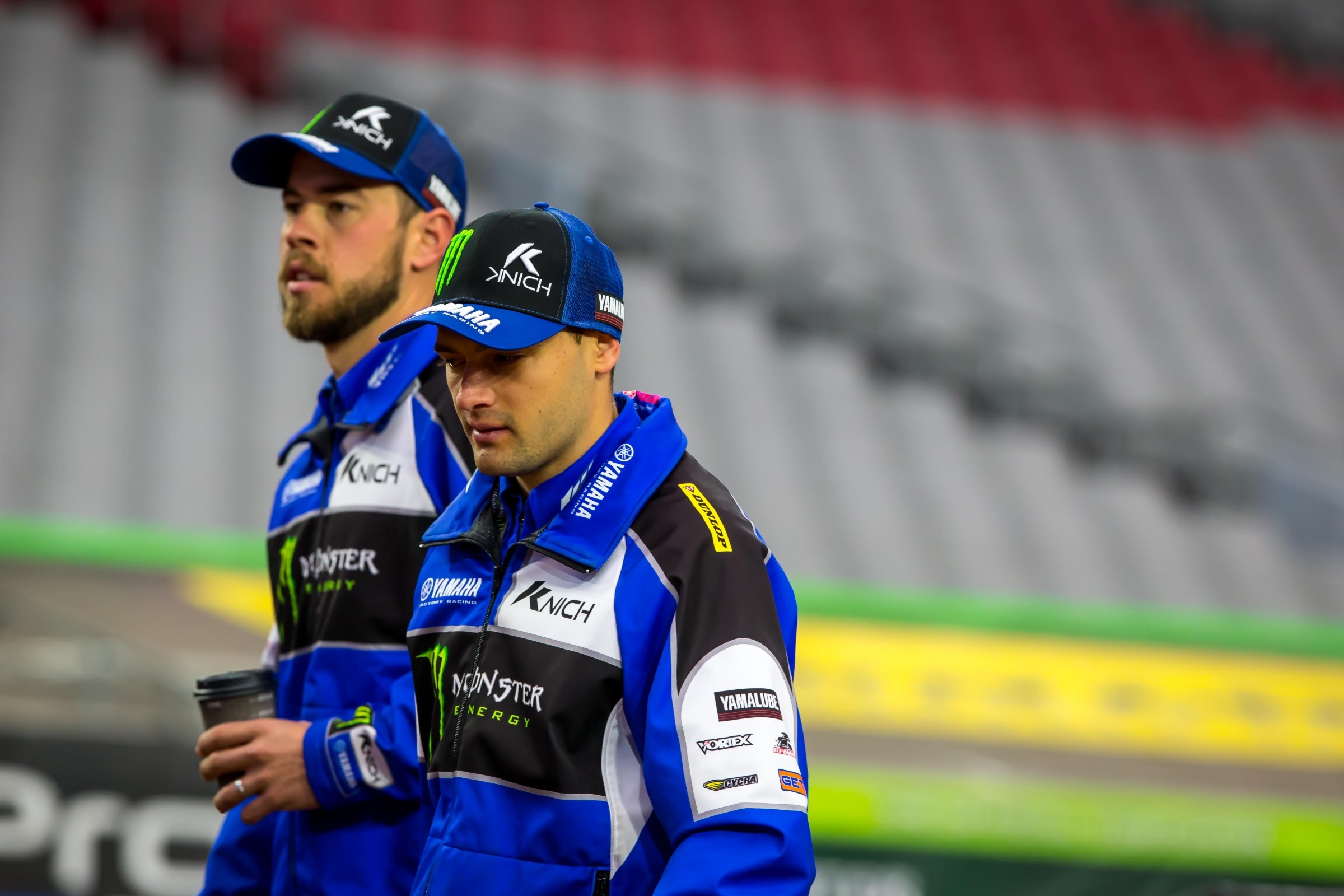 At Anaheim 1, all the riders say they’re in the best shape of their lives, that their bikes have never been better, and they’ve done all they can during the off-season. Then the races begin and the talk is overcome by results. The results have not been stellar for Cooper Webb so far this year, with 10-12-10-8 finishes in the first four rounds of Monster Energy Supercross. The two-time 250SX Western Region Champion had hoped to be a 450SX Championship contender this year, but alas, he’s been a notch below expectations.

It looked exceptionally bad in a heat race at Glendale, when Webb went backward and only made the main with a ninth-place finish. Then, suddenly, he found some mojo in the main and ended up eighth—his best race of the year.

Webb admits now that some off-season injuries might have slowed his progress, and he’s just looking to steadily build his way back to the top. The Monster Energy/Knich Yamaha rider came to Glendale’s post-race press conference to explain his situation.

Racer X: Where have you been? I even tried to chat you up in the rig last week, but you were not saying much. Do you have much to say now?
Cooper Webb: [Laughs] A little bit. It was definitely better. It’s not night-and-day better, but we definitely made some progress. Today in qualifying, I was a lot better. I was up there. The heat race was absolutely horrible.

The heat race was not good. I don’t know if you checked, but I wrote that the heat race was not good on Twitter and then some jerk copies you in to say, “Look what he said.” I’m like, if I saw Cooper to his face, I don’t think he’d be telling me the heat race was awesome.
No. It’s funny, at that point I just had to laugh it off. It was that bad. I was actually pumped, as bad as that heat went, to ride well in the main. Obviously, I had like 18th gate pick or something. But it was good to be in the battle and ride with some guys I hadn’t been riding with. We were discussing that obviously it’s an eighth place, but I was battling with the guy that won the heat race [Justin Brayton] and the guy that’s gotten fifth the past three races [Weston Peick]. Cole Seely was on the podium last weekend and I passed him. So, that just shows, I think, how tough our class is. It’s progress. I think it’s hard to go from tenth place to on the podium. We’re just building, getting better, and trying to improve every week. Hopefully get where we want to be soon.

With how you felt say in December, before Anaheim 1, did you think, “Man, I’m going to be the only top-ten guy right now?” Or are you way off from where you thought? Did you know that there was going to be a process here this year?
I knew a little bit. I don’t want to make excuses, but I had an injury in December.

So, you don’t want to use it, but it might have been something?
I didn’t know what to think. I felt like I was riding good. My fitness was good, but you never know. I think for me, also I didn’t start riding until mid-November because of my thumb. So, we were just behind the eight ball with riding is really what it came down to. It’s tough to go against guys when they’re 100 percent and I’m at 60 or 70 percent. I knew coming in. I was hopeful to be a title contender, but this class is gnarly. Like I said, I wanted to do a lot better and I still believe I have the ability to do a lot better. Getting better on the bike. I think that’s coming around. Confidence is getting better each weekend. There’s positives to take each time.

Because you know the off-season wasn’t perfect, does it make swallowing these results a little easier? If you get tenth or 12th or eighth, to be like, okay? There’s at least a little something to go off of or I should improve?
Yeah. It’s a hard thing. I’m usually so results-based. I need to be in this [certain] position. It’s just not where I’m at yet. It’s a hard pill to swallow. So, like I said, I think our mindset changed a lot this week. Just stopped worrying about results and just worry about riding. If it’s a fifth, it’s a fifth. If it’s a tenth, it’s a tenth. It sucks. I don’t want to be tenth, but at the same time, it’s what it is. Like I said, I think tonight, even though results weren’t there on paper, it was a bit of a breakthrough for me knowing I can battle with these guys and I can get in the mix and ride a solid 20 laps. We’re going to a good stadium [in Oakland]. I had a good race there last year [Note: Webb landed his first 450SX podium last year in Oakland]. Got a lot more to go. Obviously, I would love to be a contender right now, but all I can ask for is to get better.

You were just known as such a fiery guy in the 250s. That’s all still in there?
It’s in there. It’s tough to explain to people.

You’re not less motivated or over it?
Exactly.

Here’s the worst part. I’m going to tell you just how this looks on the outside right now. You have a teammate who is a replacement rider [Justin Barcia]. So, we get hit up by fans that are like, “One guy’s got a huge contract, and another guy’s racing for his life.” It’s not like you’re, “Hey, I’ve got a contract. I’m good.” Right?
No. I want to be up there. If that was the case, I wouldn’t even waste people’s time or money. I wouldn’t be racing. It’s tough. I think a lot of people don’t realize how mentally tough the sport is. Justin has dealt with injuries in the past. This year he had a great off-season and a healthy off-season, and look what he’s done. I think injuries do play with your head a little bit. Unfortunately, that’s just the nature of the game. It’s racing. I still think the fire’s there, it’s just figuring it out. At the same time, the 250 class is the 250 class. This class is gnarly. It’s one of those things. I do believe I’ll be back to where I was one day, or if not better. All I can do is ask to get better and get more comfortable and get that confidence back.

Last week’s main event, you and Barcia had an incident. Barcia said you were cool afterward. Just take me through it. Are you cool?
Yeah, we’re good. It’s funny how shit stirs.

I think it happened on the floor or on the track, so people saw it.
Exactly. It was one of those things where the last lap we were in a battle and he had hit me. I lost two positions and I came off the track. We’re both emotional people and it was just like, “Hey, what the heck was that?” He explained to me it was totally unintentional. Just because we were both fired up about it, we were fine within two minutes of being at the semi. We talked about it. It’s racing. I think it doesn’t matter if we’re teammates or not. We’re both, I’d say, two of probably the most emotional guys out there. We were both fired up because we had just come off the track, then a few minutes later we were okay. I like Justin a lot. It’s been great having him as a teammate. I enjoy it a lot.