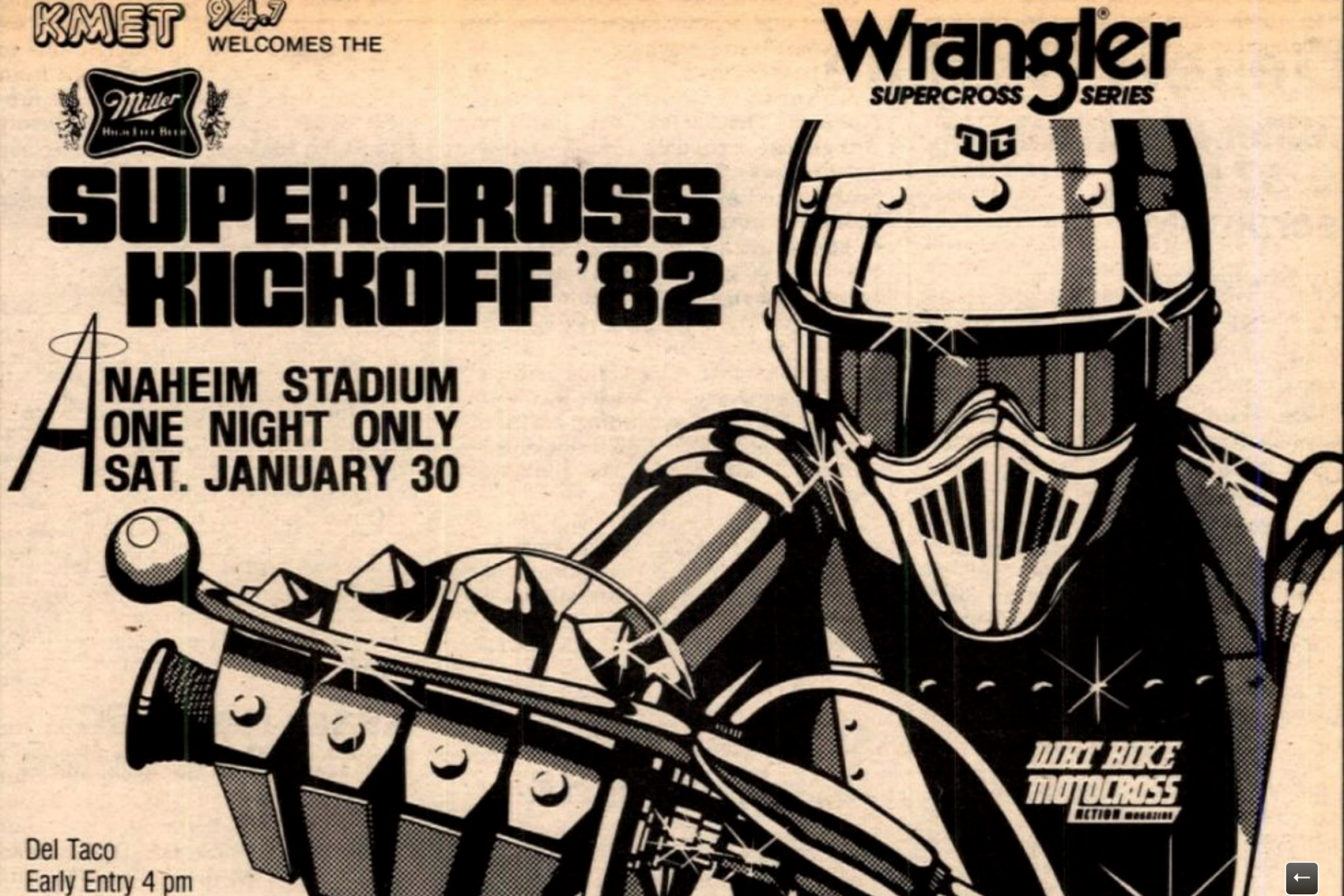 On This Day in Moto January 30

A Husqvarna motorcycle won the Swedish brand its first race in the U.S., at the Imperial Valley Motorcycle Club’s Hare Scrambles in El Centro, California. Thirty-four riders attacked a 60-mile course at the start of the event, and only half of them managed to finish. At the top of the results with a five-minute lead was Don McCarley, riding the new Husqvarna 250cc works scrambler. According to an ad in Cycle News, the bikes would be available to selected racers and dealers on March 1, 1966.

Thirty-six years ago, the Anaheim Supercross kicked off the 1982 season and the winner was a first-timer—Team Honda's Donnie "Holeshot" Hansen. Behind him, five of the next six riders were all past or future SX champions: Jeff Ward, Johnny O'Mara, Bob Hannah, and Ricky Johnson. The only rider who broke up the lineup of SX Champions was fourth-place Darrell Shultz, but by the end of the year he would be the AMA 500cc National Champion.

In a surprising story, former AMA 125 and 500 Motocross Champion Marty Smith, who had announced his retirement the previous November, showed up on a Honda CR250, supported by Oakley Goggles. Smith said he planned on doing all of the 250 SX races but did not qualify at Anaheim, nor would he make another main event in his Hall of Fame career.

And the biggest star to turn out for the AMA Miller High Life Supercross opener? Elvira, the horror show host of KHJ TV. Oh, and the announced attendance for the race? 70,205, the most the stadium had ever held to that point.

Tickets for the race could be bought for as low as $6.

Suzuki's Larry Ward won the AMA Supercross at the Seattle Kingdome for the second time in his career. Ward, who was born in nearby Snohomish, Washington, would win a total of three premier-class main events in his career, the other coming in a mudder at Tampa the previous year. Factory Connection Honda rider Mike LaRocco was second and Yamaha's John Dowd third. In the 125 class, Pro Circuit Kawasaki's Nathan Ramsey collected the win—his second straight in a string of three consecutive wins—over Yamaha of Troy's Casey Johnson and Suzuki-backed Michael Brandes.

Team Honda's Ricky Johnson won the opening round of what was called the MTEG Coors Super Crown of Motocross at Anaheim Stadium, but it was not actually an AMA Supercross event, as series promoters Mickey Thompson and Mike Goodwin were basically at war over who controlled supercross in Southern California. Yamaha's Micky Dymond and Kawasaki's Jeff Ward would finish second and third in the race, which you will not find in the Racer X Vault. As for the Thompson-Goodwin feud, it's about to get really, really ugly...