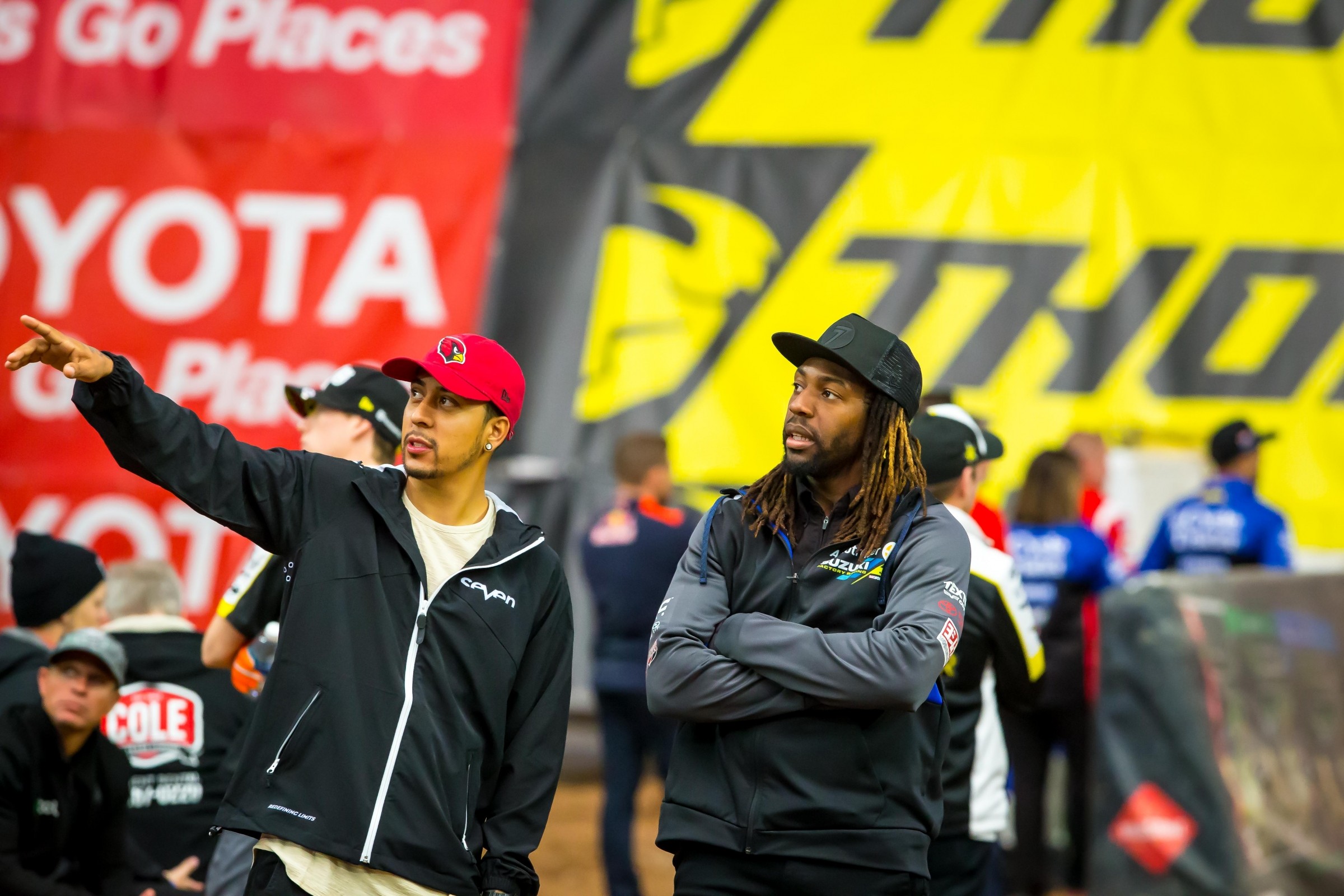 Insight Malcolm in the Middle

With Justin Bogle sidelined from head injuries sustained in the off-season and unable to line up for the first three rounds, there was an open 450 spot on the Autotrader/Yoshimura Suzuki team. Malcolm Stewart was given that spot for two rounds: Houston and Anaheim 2. Beyond that, when Bogle returned, it was unknown what the future would hold.

Malcolm has been getting more comfortable with the bike each week, and he and the team get along really well. (Remember, he had just two days on the RM-Z450 prior to Houston.) Last weekend in Glendale, Bogle returned to the starting gate, but JGR also found a way to get another bike together to get Malcolm to the line. Steve Matthes reported on the PulpMX Show that in a conversation with team owner Coy Gibbs, Gibbs said he wasn’t going to be spending any of his own money to keep Malcolm on the team. However, team manager Jeremy Albrecht has been on the phone and sending emails to get the sponsorship money to keep Malcolm.

I spoke with Jeremy before the night show about the status of Malcolm with the team, as well as Justin’s status heading into his first race of the year. I then talked to Malcolm after the race. See what they had to say below.

Racer X: Hey, Jeremy, we’re here in Glendale and Bogle’s back. JGR originally had a two-race deal [with Malcolm], but you’ve extended it for the week. Can you tell me about how it’s all come together?
Jeremy Albrecht: Things have been going really good with Malcolm and we feel like each week, he gets more comfortable and he’s getting better. Obviously wanted to give him a little bit more time. Coy let me do one more race just to kind of give me time to see if I can get some people to help.

Working some deals with some sponsors?
Yeah. So, we’ve been trying. We haven’t finalized anything, but we’re hoping we can get there. Suzuki already was willing to do something, so I just need to find some more and we’ll see where we’re at. We’re definitely all trying. We need to figure it out soon, because we already got next week coming. That’s what’s great about this sport. Always next week comes quick. We got to make the decision here. I’d like to say it’s on Monday, but mid-week we should know what we’re going to do.

Is it more just a financial support thing? Are you able to build the bike, the whole technical side of the deal with the bike? Is that okay for you guys, or is it more of just a sponsorship kind of thing that you need?
Yeah, the bikes. Rene is our parts guy right now and shop manager, and he actually built a bike this week. We uncrated one. Took it to the frame. All three mechanics pulled together. They shipped stuff out here in boxes and built a bike all last-minute. We made it happen on that side. As far as all that, I feel like that’s not the hard part. It’s just expensive to go racing and how many parts we’ll use, the travel, another mechanic. We didn’t budget for any of this, so that’s really the tricky part. Coy is obviously fine with it. I don’t need to make money, I just can’t lose money [is his view]. So I’ve got to figure out how to make it happen.

Bogle’s first ride back. How’s he doing so far? Night show hasn’t started yet.
So far so good. He’s kind of just seeing where he’s at. Just riding around, he looks pretty smooth. It’s really the first time he’s been at a race this year, so just feeling out his bike at this speed and making little minor adjustments. He’s feeling pretty good. Right now, out of our team here, Malcolm was the fastest. Bogle was second and [Weston] Peick was third. So, I’m all right with that because Peick’s been qualifying not great and going out there and pushing in the race. So it’s good the other guys were a little quicker, in my opinion, because it gives them a little more confidence. I know Peick’s going to bring his anyway. Peick’s kind of been taking it easy because this is the race last year that he crashed in practice. Even though you don’t want that to be in your mind, it always is. It was a little muddy again. Even after the first one he’s like, ‘All right, I made it through.’ None of us talked about it, but he brought it up. So he’s obviously thinking about it.

Almost kind of like how Roczen rode last week. He admitted it was still kind of in the back of his mind a little bit.
You want to act like that stuff doesn’t bother you. You have to block it out as much as you can, but it’s there.

How is Bogle doing overall? How long has he been on the bike?
He’s been on it, not doing like full motos, probably only a few weeks, but he was riding doing starts when he wasn’t able to ride much. He did some turns. He did some turn tracks. He rode the outdoor track a little bit. So, he’s been riding just to kind of work on technique, but he wasn’t really pushing until recently. For a little while, he was going around the whoops and not doing big rhythms. He just got back going here. He got released after Anaheim 1, so he’s just been getting ready for here.

So he’s not coming in totally cold.
Not totally cold. He’s been riding, but I think honestly like even for Malcolm, it’s tough to come in once everybody already got one race because they already got their jitters out. Now you got to go do it and they’re already up to speed. They know where they are. You’re still wondering where you’re at. So, it usually takes a few weeks.

Today is like A1 for Bogle, basically.
It just takes a little bit, the nerves and to figure out where you’re at. No matter how much you test, you ride it, you push as hard as you can but the only time you really push is when you get in a race situation. And the starting grate, that’s all new for everybody. So you do your starts on your own, but it’s a whole different story when you do it with 22 guys out there.

There’s a long start here today. Any third gear starts going down?
I don’t know. You could do it on these grates. I think some of the guys do a different technique. That’s what’s cool about the grate right now, is no one has it down. For us, we’ve had okay starts, but maybe this is our thing, long starts. We’ll see.

Racer X: Heat race Mookie was back tonight!
Malcolm Stewart: The heat race was good. Just got to work on my starts. In the main event, just had a bad start. We try to keep moving forward, but obviously there was a good little battle. It’s just good to get back with those guys, battling back and forth. Those guys were just better than me today. We ended up finishing 13th, but at the end of the day, you can’t keep your head down. We’ve got a lot of races left to go. Going to go back and keep digging. Like I said, just got a lot more races to go. I think the biggest thing for me was got to work on my starts and corner speed. I think that’s what ate me up tonight. Got back and keep moving forward.

The track was a lot more difficult tonight than it has been so far this season. What’d you think about it?
Yeah, I think the track was pretty good. Some good set of whoops. The rhythm section was definitely a lot of good rhythms, but obviously by the night, everybody’s kind of doing one rhythm. It was good racing. I definitely think the track was a little bit more passable, but I would say it definitely was a little bit more technical track tonight. We’ll see what Oakland brings up.

What were some positives to take out of today?
Just more seat time, to be honest. The intensity is starting to come back up in the heat races. That was good. Just like I said, just got to clean up a few things. We’ll be in there, man. The goal is to get in that top ten and stay in there. We’re right outside of the bubble, but like I said, it’s not too far away. It’s definitely a goal that’s easily reachable and we’re going to keep going for it.