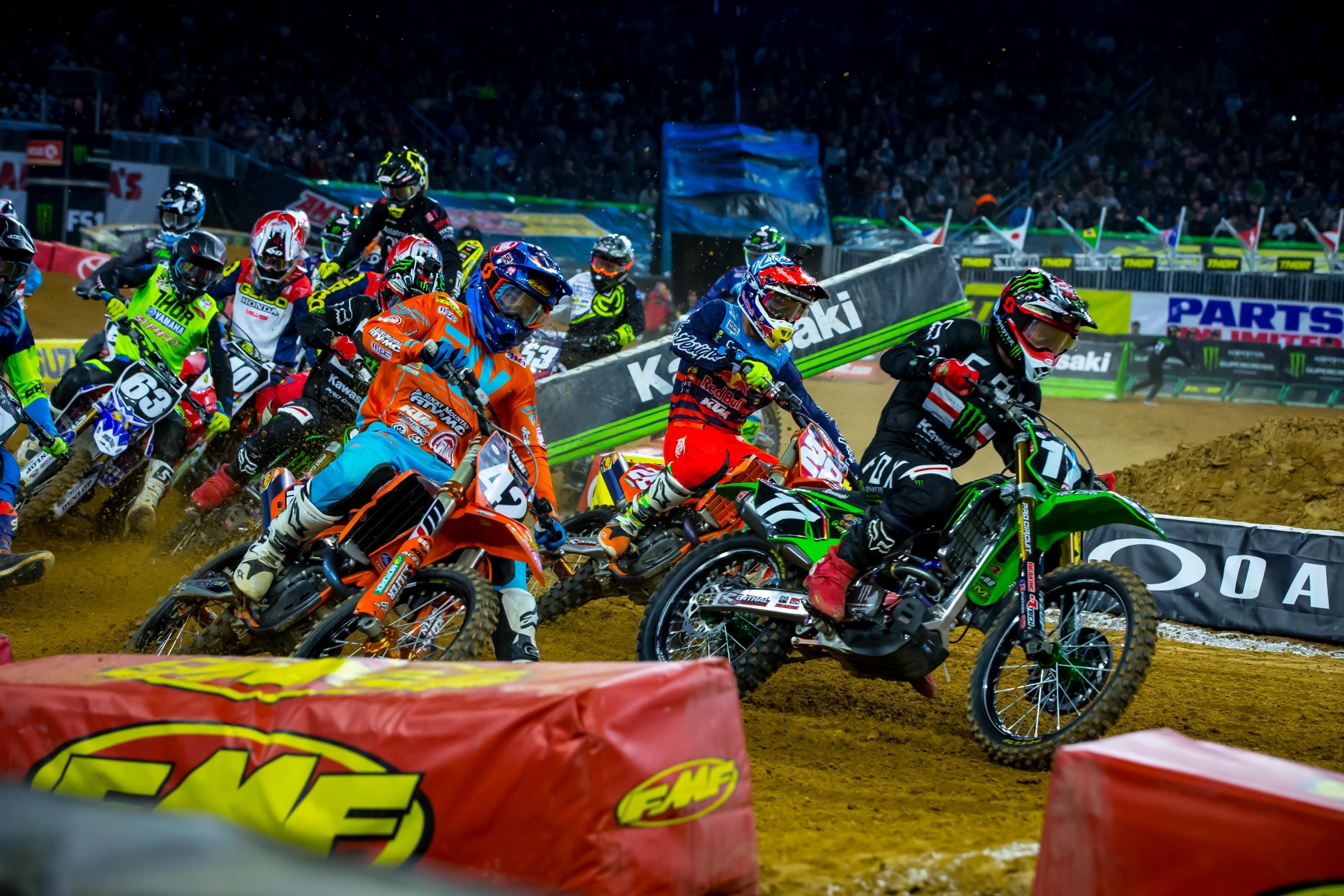 This weekend, Feld Motor Sports is bringing the Monster Energy Cup format to Monster Energy AMA Supercross, an FIM World Championship. That means three races—for both the 450SX and 250SX classes—in one night to determine an overall winner. Unlike Monster Energy Cup, this race will pay championship points. It has already been a crazy season, but it’s about to get crazier!

How long are these races?

Note: The format changed for Atlanta to the following:

Expect that final 15-plus one race to last around 16 minutes. Back in 2016, when Anaheim 2 ran under the 20-lap format, the main event ran for 19 minutes. There were plenty of 20-lappers in smaller stadiums that lasted around 16 minutes, though.

How long between races?

What if someone blows an engine in the first main? Is there time to get it fixed? Well, somehow the AMA has fit six races into the regular amount of time while also building in big breaks. As an example, there will be about 50 minutes between the finish of the first 250 race and the gate drop for the second 250 race. Then another 50 between the end of race two and the start of 250 race three.

Without heats, how does qualifying work?

The fastest 18 riders in timed qualifying from each class make the mains. Then each class has an LCQ late in the afternoon to determine the final four gate entries into the mains. We think it would be cool to have the 450 LCQ battle of death kicking off the night show, but this new format is highly experimental. We’ll see if tweaks are made for future races.

How do we figure out the overall?

Total up the finishes in all three races and see who has the lowest score. Finishes of 1-3-3 equal a total of 7. Finishes of 2-2-2 equal a total of six. The 2-2-2 beats the 1-3-3. This is Olympic-style scoring, so do not use the Lucas Oil Pro Motocross style points-payed-per-race stuff. Speaking of…

What about championship points?

By the way, the supercross record book will only record the overall winner of the night with a race win. Individual race wins will not count toward a rider’s career main event win total.

We had a few questions in the comments about how the tie-breaker will work this weekend, so we decided to post an update here.

The tie-breaker for Triple Crown races is better finish in main event three.

Will this be crazy?

Heck yes! While the record book won’t show the race one winner with a victory, the shorter races give everyone a shot at glory. Wouldn’t the teams of Blake Baggett (Rocky Mountain ATV/MC-WPS-KTM) Justin Brayton (SmarTop/MotoConcepts Honda) or Weston Peick (Autotrader.com/Yoshimura Suzuki) be ecstatic if their guy holeshot and won the first race of the night? If Justin Barcia gets a holeshot, how aggressive will he be if he has to hold dudes off for only a few laps? What about… “Heat Race” Mookie?!

On the flip side, all these gate drops and dudes going for it could lead to mistakes and inconsistency. It will be really hard for anyone to get three great starts in one night. Championship contenders have a lot to think about with three gate drops and different riders going for it in shorter races. Bottom line, although we’ve seen this at Monster Energy Cup before, there’s a huge difference when points are on the line. This will certainly be interesting!

What else do you need to know? Drop your questions into the comments below and we’ll try to get them answered.