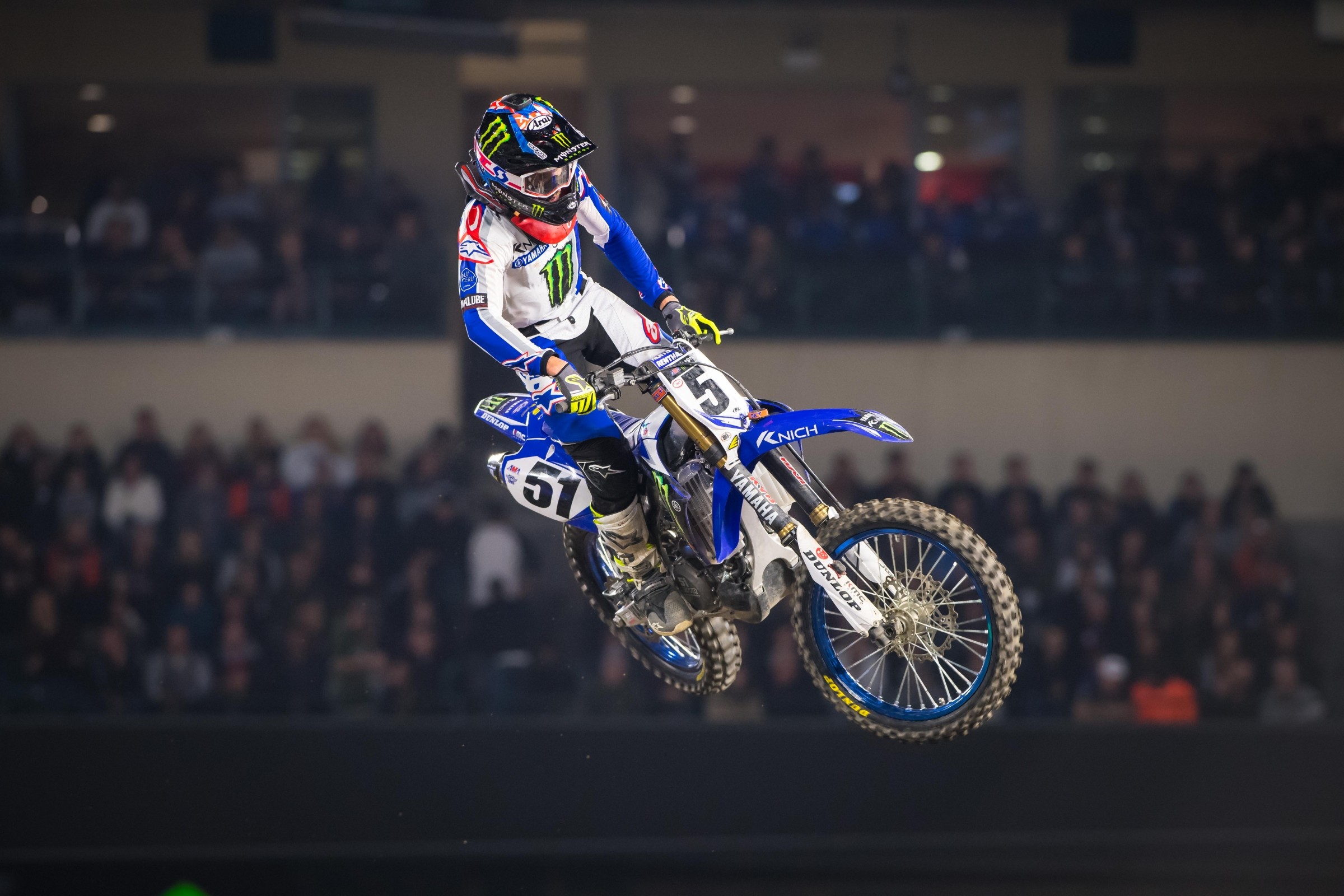 3 on 3 Questions from Anaheim 1

1. Tomac's crash: shocking, or just what to expect in a year with guys fighting for their first 450SX title?

Jason Thomas: I am somewhere in the middle on this one (crazy, right?). I was surprised that he threw the race away, but I also remember saying to myself, "The only person who will rbeat Eli now is Eli." With so much pressure, anticipation, and excitement surrounding Anaheim 1, it's not hard for riders to lose their focus in the middle of leading a main event. All it takes is one momentary lapse in concentration and disaster can strike. His crash wasn't some monumental error; it was just Eli not giving that section his full attention. James Stewart had this problem dozens of times over the years.

Ryan Sipes: To me, it was a little bit shocking. For one, he made me look bad; I said last week that I thought he was over these freak little crashes—the “I’m way out front, I’m faster than everyone, all I have to do is ride and I’ll win” kind of crashes. It’s almost like when he doesn’t have someone to catch and pass, his mind wanders. That section did look pretty shiny and slick, so maybe he just pushed a little too hard there. Watching the replay, it doesn’t look like he got a ton of wheel spin, but for some reason the front end dropped like a brick. Unless it was a bike issue (which it completely could have been but we’ll never know), it looked like another lapse in focus. For a seasoned vet, that has been his undoing far too many times recently. Now, hopefully, he can climb his way back into this title hunt. At least he has someone to chase now.

David Pingree: I am always surprised to see guys at that level make a mistake like that when they are out front with no pressure on them. I don’t know if he was pushing too hard or if it was a concentration lapse, but it set him back into a hole just like last year. The good news? Eli rode great last year in the same situation. The thing that has me scratching my head is why he pulled off. I’ve seen Phil Lawrence, Travis Preston, and plenty of other riders finish a main event near the front with their pants falling off, so why did Tomac pull off and forego any points? It wasn’t the pants. The Kawasaki PR says he suffered a “shoulder contusion,” which is just a fancy name for a bruise. What championship-caliber rider do you know pulls off for a bruise? I think he banged his shoulder up worse than he’s letting on. Hopefully it isn’t anything major and he can claw his way back into this thing.

JT: The obvious answer here is Justin Barcia. I am sure that will be discussed by others in this column and why question #3 is sitting there in wait. Instead, I will choose the two-headed monster of Justin Brayton and Weston Peick. Both of these guys came in under the radar and both guys absolutely delivered. Justin led his heat race, and if not for “Bam Bam” Barcia Bam-Bamming him out of the way, he may have won that. He backed that up with a solid seventh-place finish in the main event. As for Peick, he was solidly battling with the top guys early in the main event and was able to keep himself ahead of the swarm of riders like Cooper Webb, Broc Tickle, and Jeremy Martin, who were all smashing each other. Anaheim 1 is all about managing expectations and delivering under pressure, and these two stuck the landing.

Sipes: The biggest surprise to me was not Roczen’s finish, but the way he rode. We all know he’s fast, but I figured he might be a bit reserved in his first ride back. “Ride smart,” if you will. I mean, the guy has been off the bike nearly a year, has gone through unthinkable amounts of pain and surgery, and he’s going to pick up right where he left off? Any normal person would ease back into it. I thought a podium would be tough for him unless he pulled the holeshot and rode a perfect race, but he almost did it even with a bad start—not to mention the near-death experience before the triple! He was really aggressive throughout the race, passing a ton of guys and fighting back when they made it tough on him. Fitness and strength didn’t seem to be an issue whatsoever. I was super impressed. I think he’s a really special rider, and he's going to be tough to beat this year once he gets back in the groove.

Ping: It was Barcia. Between injuries and machinery that he just couldn’t get along with, it’s been a rough few years for him. The blazing speed and aggression from his early Honda days are still under the hood, and it looks like the stars are lining up for him to deliver on all that talent in the 450 class. From timed qualifying to his starts to his fitness in the final, Barcia is back and better than ever.

3. Did Barcia ride well because he's motivated with his back against the wall, or did he just finally put the pieces back together?

JT: I don't think it was anything to do with being up against the wall. He’s had huge pressure from teams in the past and it didn't seem to matter. He wasn't able to muster much in even the direst of scenarios. To me, he just looked like he found something that he had been missing. He was fast all day long. He got good starts all night long. He was fast, fit, and aggressive. This was not the Justin Barcia I had seen for the past two-plus years. I am still not quite sure what the missing ingredient was, but I know a different rider when I see one. The switch was flipped for whatever reason, and even if he isn't quite sure why, I doubt he really cares at this point. He needed a ride like that in the worst way.

Sipes: I think it’s a little of both. He’s on his last chance with a factory team, in my opinion, so he’s giving it a little extra for sure. But he also looked more comfortable than I’ve seen him since he rode for Honda. The last few years with Yamaha were scary to watch for me. He was fast at times for sure, but it wasn’t pretty. It looked like at any moment, one of those little mistakes was going to bite him in a bad way. His riding style and that bike just did not mesh. Huge credit to him for pinning it anyway, but that’s not a recipe for consistent success. At Anaheim, he looked aggressive but comfortable at the same time. That all-new Yamaha looks like it’s working for him. He proved he’s still fast, and given his history of holeshots, I think we are going to see a lot more Barcia this year.

Ping: It never hurts to be motivated. Justin was in a situation just a few months ago where he had to find his own bikes and go racing on his own dime—that will either motivate you or defeat you. In this case, Barcia landed at an open spot under the Yamaha tent and he’s taking advantage of the opportunity. I also believe he has been hampered with injuries, one after another, for the past three years. That barrage of injuries crushes your self-confidence, your fitness, and your race craft over time. Getting healthy and preparing properly for this season is making all the difference.