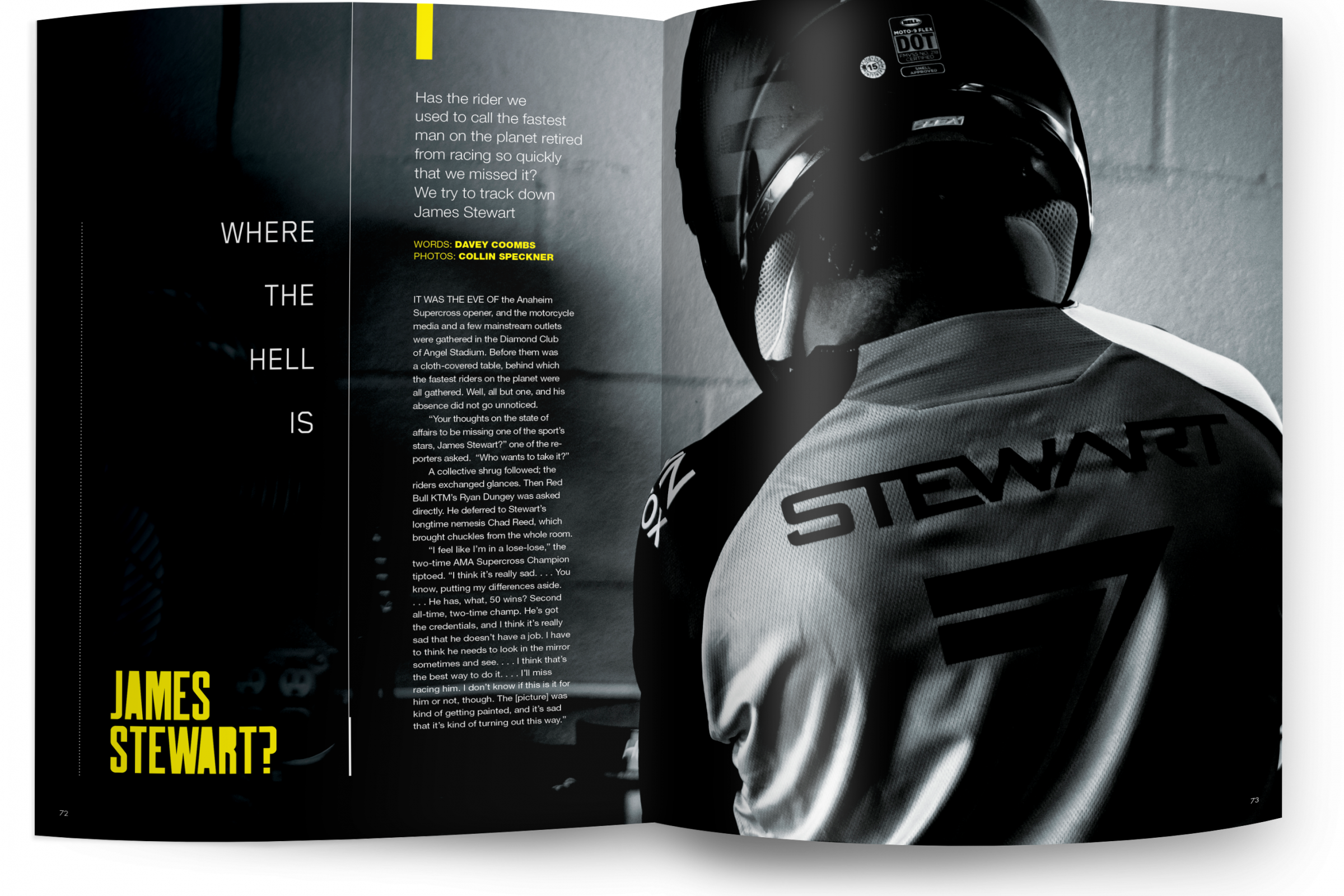 In the Mag, Where the Hell is James Stewart?

Pick up your copy now and read about the rider we used to call the fastest man on the planet—James Stewart, Trey Canard and his highs and lows in his professional career, and France becoming the favorite of the Motocross of Nations. Also read about Monster Energy/Pro Circuit Kawasaki and their 2018 SX title chase, the 46th Annual Thor Winter Olympics, and how Justin Cooper became one of the top prospects in the 250F class this season.  Subscribe today.

Where the hell is James Stewart? That’s a question that’s been asked around the pits and around the office quite often in the last year and a half. Once the fastest man on the planet, Stewart has practically disappeared from the grid. He has not raced since Washougal 2016, he has turned off all social media (other than a brief salute to the late Nicky Hayden last May), and he’s definitely not up for any interviews. He was spotted briefly at his own JS7 Ride Day at the Stewart Compound in November aboard a #7 Honda CRF450R, wearing a Bell helmet without the signature Red Bull graphics he’s run for a decade. He did a few laps, hung out with some of the visiting SEVEN riders and Freestone Spring Classic winners, and that was it.

Collin Speckner was there to shoot some photos, one of which appears on the cover of this magazine. But Collin didn’t get a chance to speak to James about where he’s been, where he’s going, and when we might see him on race track. No one has.

Back in September, when the AMA was getting ready to release the 2018 numbers, they called me to see if I could call James and see if he was planning on racing. If not, they were going to release his trademark #7, as he did not race or score any points in all of 2017. I did not hear back from James, but I did get to speak to Big James, his father. He told me that they were planning on racing—both James and his little brother Malcolm—likely on their own team. Big James called the AMA and said as much, so the AMA saved #7 for James and #27 for Malcolm, as he got to retroactively choose a two-digit number as a past 250SX Regional Champion.

As the new season approached, everyone waited to hear what the Stewarts were doing—James in particular. After he did that brief ride day at the compound back in November, the trail went cold again. All of the factory seats were filled, and the music was about to stop. But where the hell was James Stewart?

I reached out to the people around him: his business partners, longtime associates, former sponsors, even his former Kawasaki teammate and Florida neighbor Tim Ferry. The consensus was either that James didn’t want to talk or they hadn’t seen or heard from him in a while, and no one really knew what his plans were. Some said they would pass a message along to him letting James know we wanted to do a magazine feature on his whereabouts, and a deadline was looming. Check out my story—“Where the Hell is James Stewart?”—and see where the trail led us in our March issue.